Start: Woolwich Arsenal or Woolwich Dockyard Stations, Woolwich Foot Tunnel.
End: Falconwood Station.
Distance: 12 km.
Introduction: This is one of the longest walks on the Capital Ring but the bonus is that it has great contrasts, going from the River Thames to Oxleas Meadow, one of the highest points in the area. The route is mainly level but there are some steep slopes and two long flights of steps, both of which have detours so that they can be avoided. There is a mixture of tarmac paths, pavement, rough grass and tracks.

There are bus stops along the way, so as this is a long section you can break your walk. There are links with the Thames Path National Trail and Green Chain Walk; in some places you may find you have to follow the Green Chain signs. There is one detour on the route which is well marked. It is hoped that eventually the route will follow the river for a longer distance.

Directions: From Woolwich Arsenal DLR station head northeast on Woolwich New Rd toward Spray St and turn left at Spray St. Turn right toward Beresford St. (Restricted usage road). Turn left onto Beresford St.
Go through 1 roundabout, turn right onto Bell Water Gate and sharp left toward Woolwich Foot Tunnel. Turn sharp right onto Woolwich Foot Tunnel. (Note: the Capital Ring signposts at the entrance of the tunnel might be misleading. With your face to the river you have to LEFT and walk along the river).
The walk starts by the southern end of the Woolwich Foot Tunnel and heads along by the River Thames towards the Thames Barrier. The Woolwich Foot Tunnel was built in 1912 and goes under the river to North Woolwich, which is the end of Section 15 of the Capital Ring. The Woolwich Free Ferry takes vehicles and foot passengers over the Thames and has been operating for over 800 years: 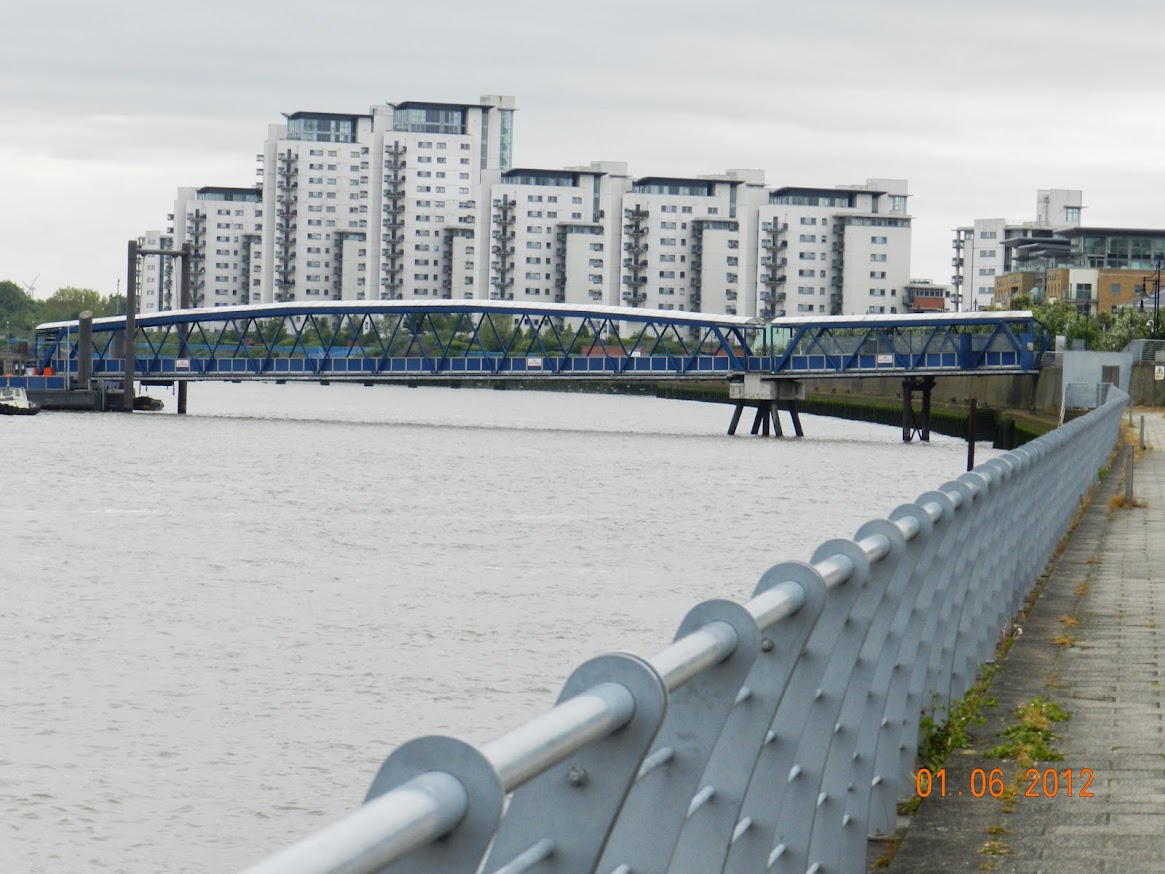 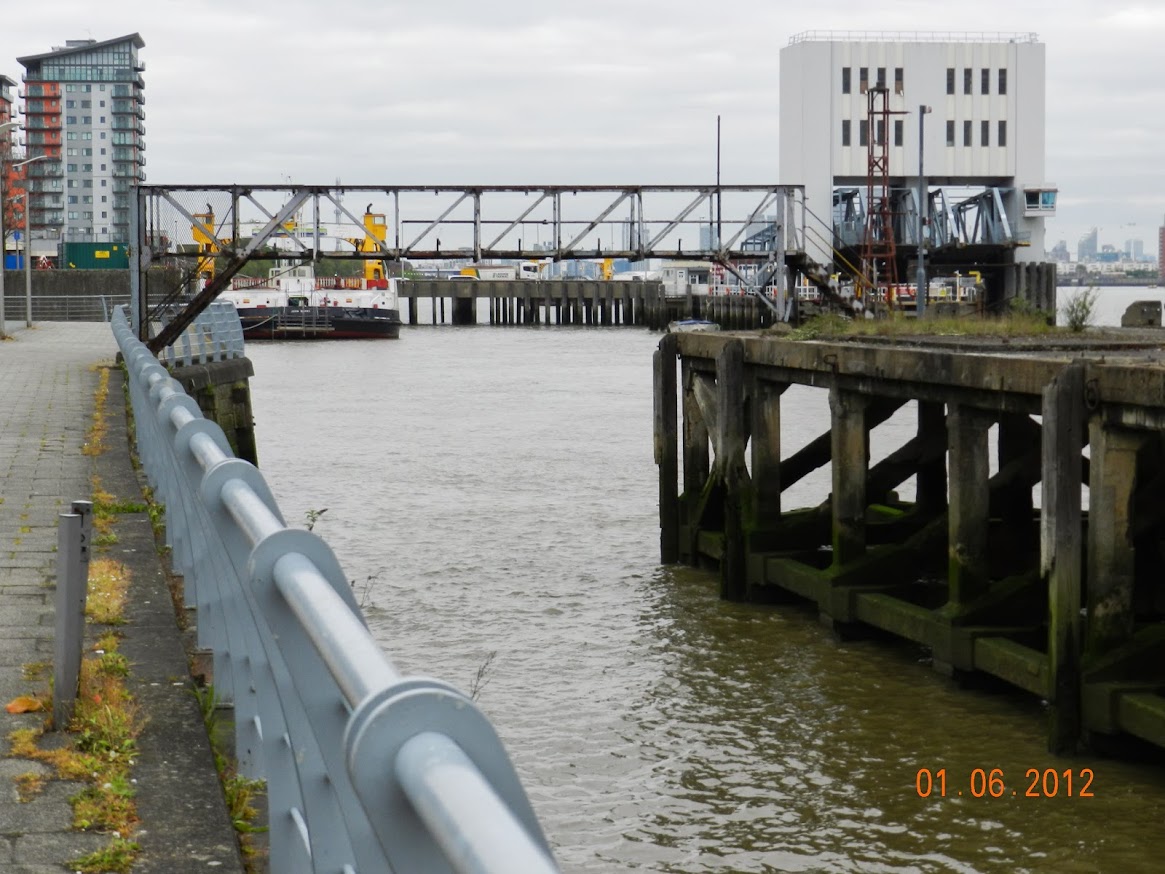 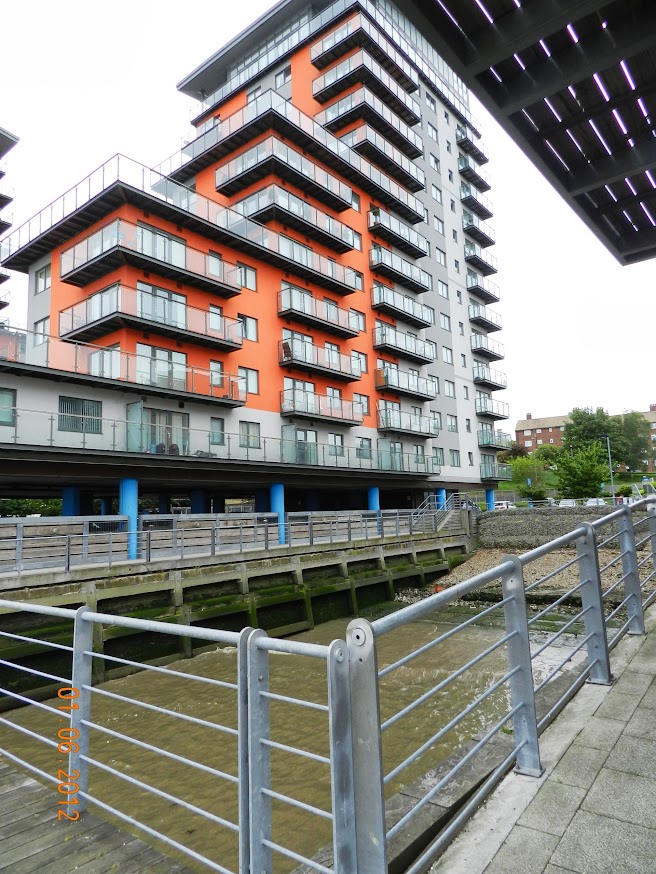 Head past the two cannon that remain from the Gun Drill Battery when this area was a Naval Dockyard: 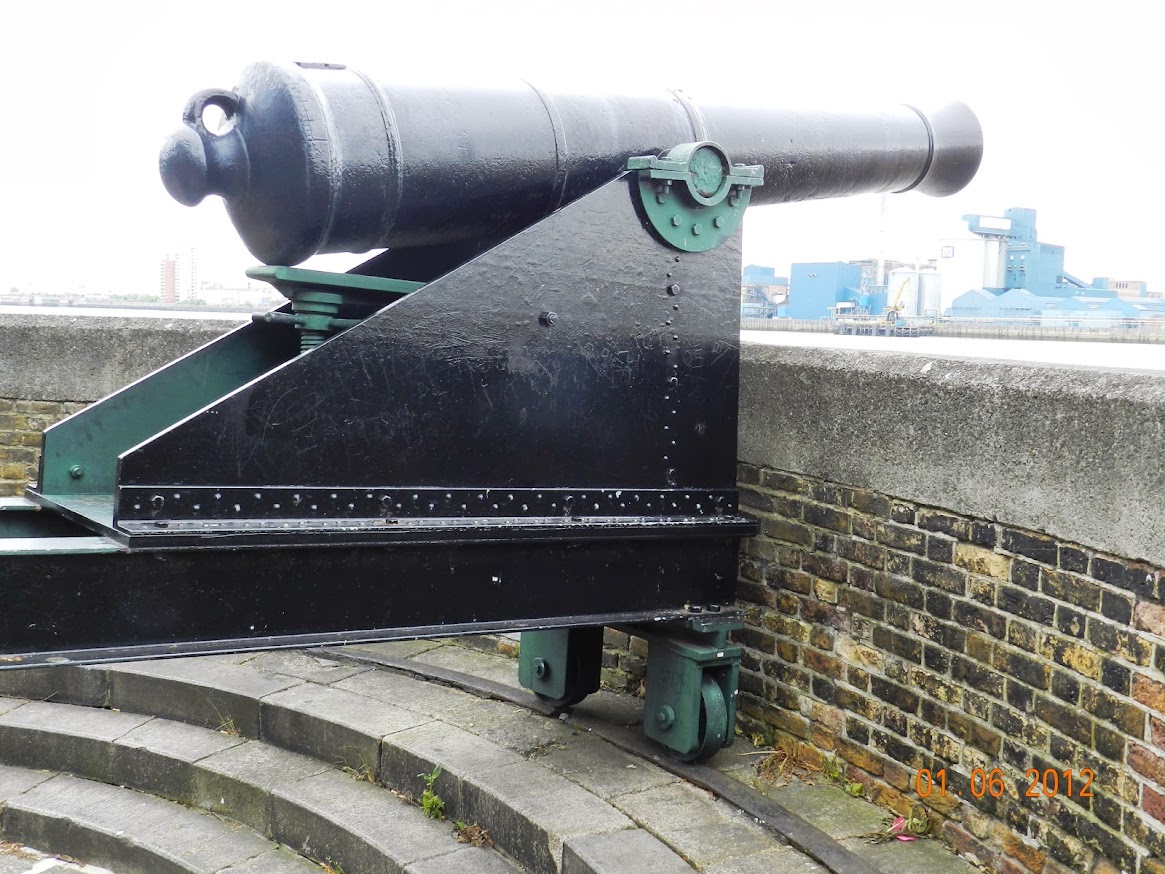 Shortly after the cannon and past a modern estate the path reaches the flood defence wall; either climb up the Linkbridge for a good view of the Thames Barrier or use the ramp to the left. The Thames Barrier was proposed following a terrible storm in 1953 which produced a tidal surge up the river; it drowned many people and caused great damage. The barrier was completed in 1984 and its huge steel gates can be raised in 45 minutes. There is a visitor centre off Woolwich Road.

Follow the Capital Ring signs to Woolwich Road and Maryon Park. Once in
the park turn left up the slope, then turn right into the main part of the park. On the left is a fingerpost and beside it a map of the park. Maryon Park, and Maryon Wilson Park which is next, were once owned by the Maryon Wilson family of Charlton House. This park was formed from sandpits and another nearby sandpit is now the home of Charlton Athletic Football Club. Either bear right at the tennis courts and walk up the 115 steps or follow the alternative route on the Green Chain walk to the left of the tennis courts. Cross over Thorntree Road to Maryon Wilson Park, which was once part of the old Hanging Wood (there is a large Green Chain signpost on the opposite side of the road here). Follow the wide tarmac path past the children’s zoo: 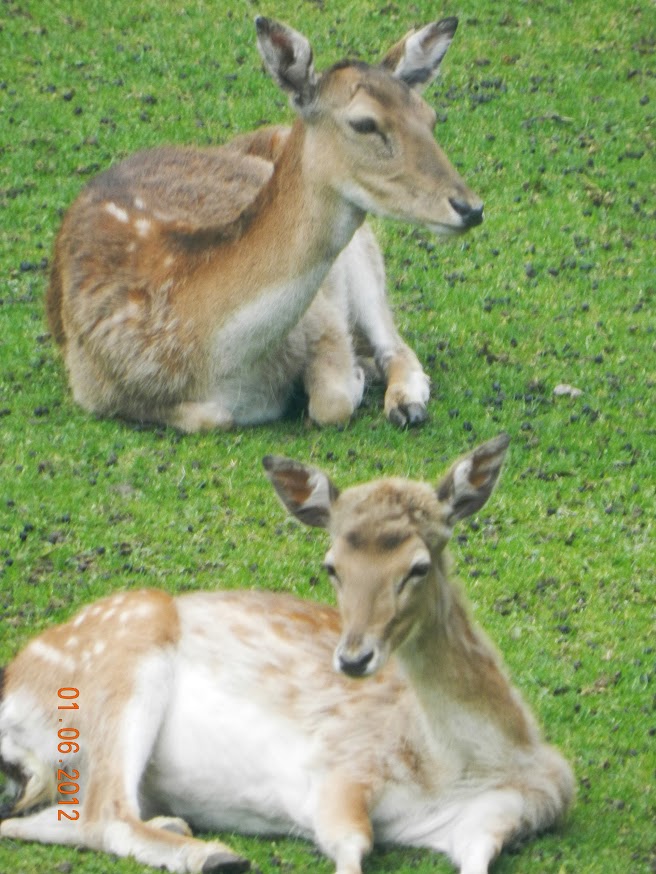 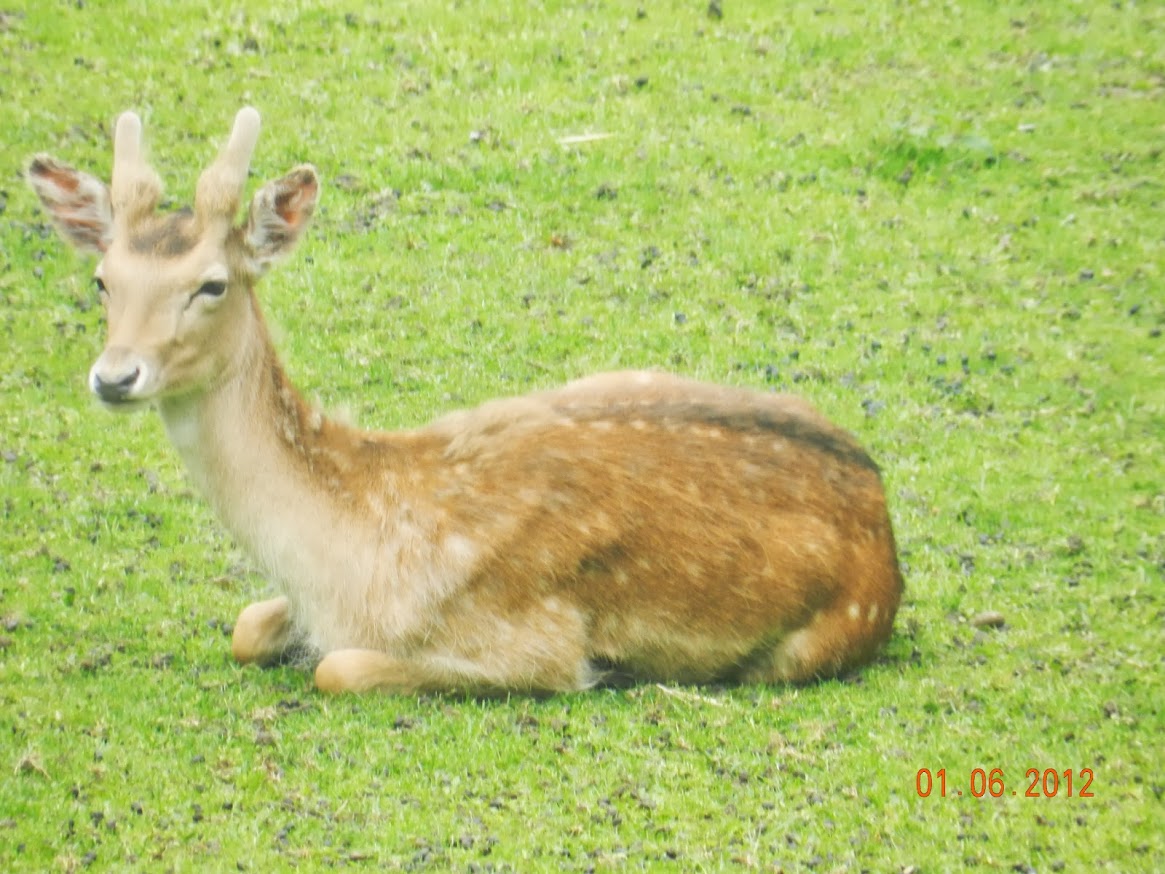 The next park is Charlton Park. There is a riding school on the right and
several football pitches ahead. Turn right along the wide tarmac path - Charlton House is ahead. Charlton House in the distance was built in 1612 for Sir Adam Newton, and is one of the best examples of Jacobean architecture left in London. It was restored in 1878 by Norman Shaw for the Maryon Wilson family. There are toilets and a coffee shop here: 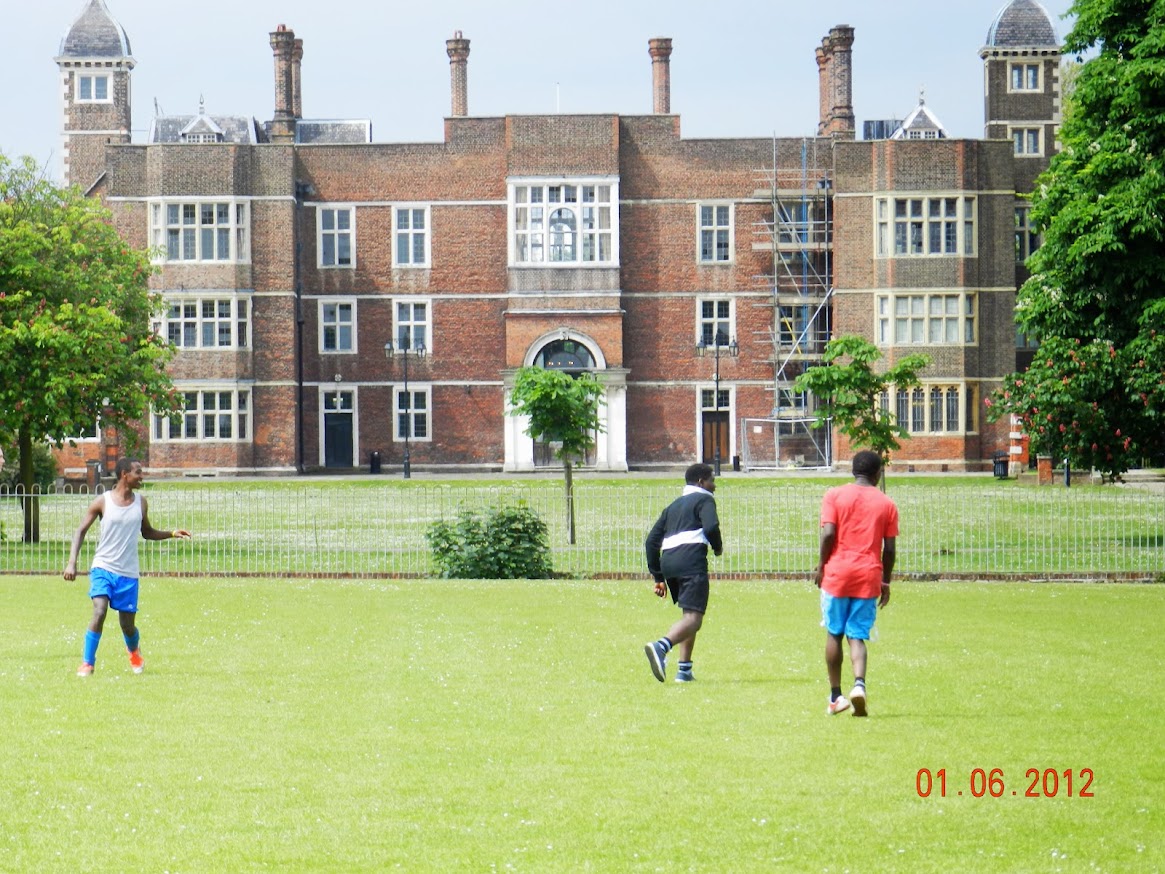 Continue along Charlton Park Lane and turn left into Inigo Jones Road to
get to Hornfair Park: 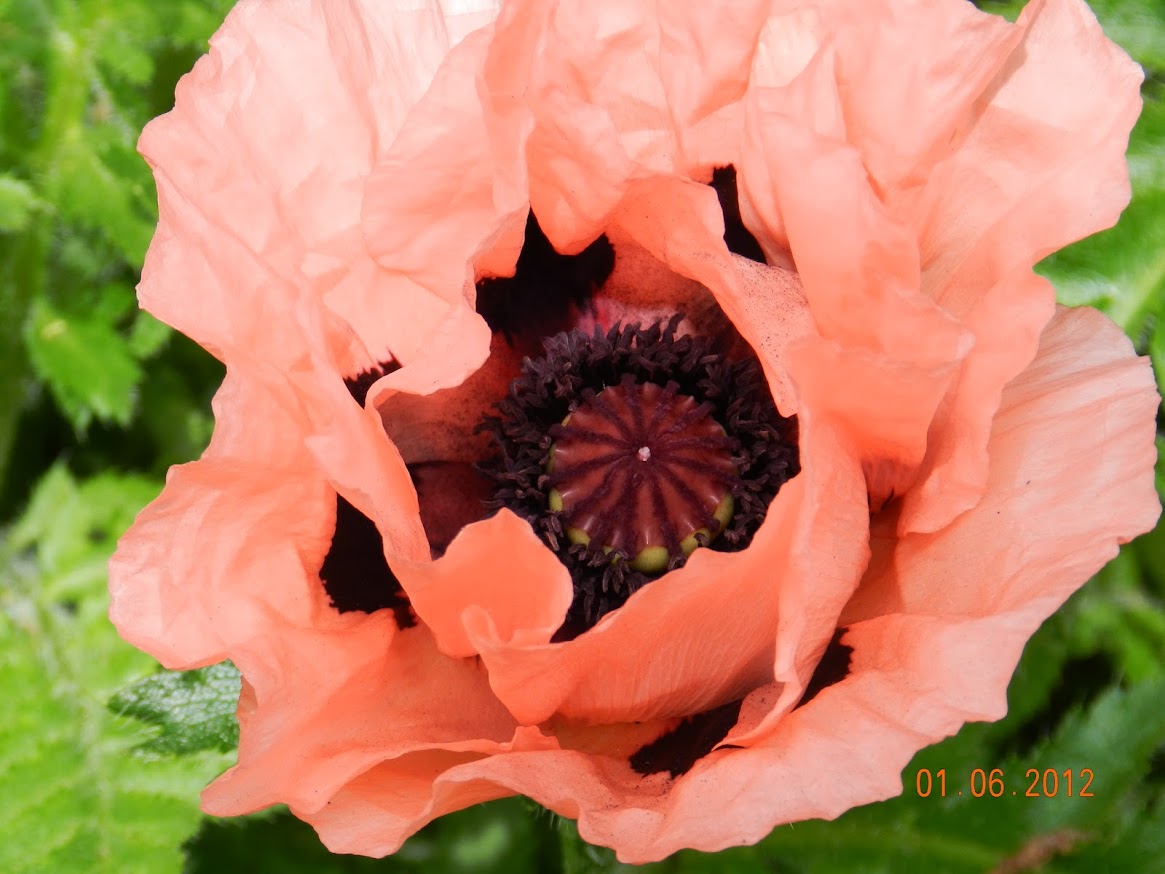 Next go across Baker Road and head over Woolwich Common and across Shooters Hill. The Roman Watling Street crossed Shooters Hill on its way from Dover to London. The name Shooters Hill may come from gunnery practice on Woolwich Common or it may have been from the highwaymen who haunted the road. In A Tale of Two Cities, by Charles Dickens, a stagecoach struggles up the muddy road of Shooters Hill. Go up the hill and into Castle Wood, part of Oxleas Woodlands. At the top is Severndroog Castle. Severndroog is an eccentric triangular castle standing 19 metres high. It was built as a memorial to Commodore Sir William James, owner of the land in the 18th century. The East India Company employed him to suppress piracy and he captured a fortress in India with this name. His widow built the castle after his death in 1784: 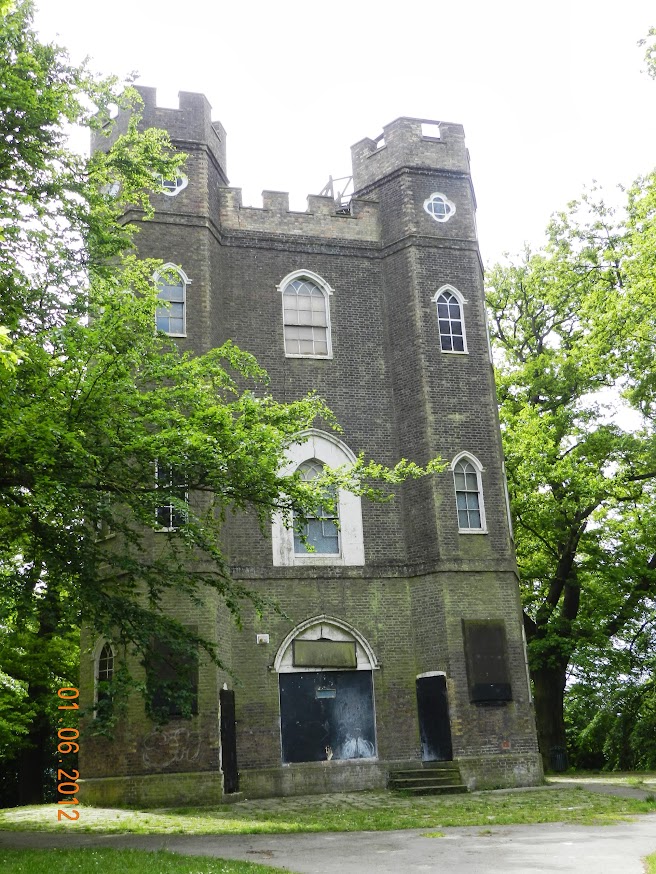 To get to the rose garden of the now demolished Castlewood House, either go down 72 steps (some of which are uneven) or take the Green Chain alternative route. If you take the alternative route turn right at the junction at the bottom of the hill to reach the gardens. Further on, some steps on the left of the path lead up to the former gardens of Jackwood House. To continue along the Capital Ring, return to the path down the steps. Continue through the woodland to Oxleas Meadows where there is a cafe and toilets: 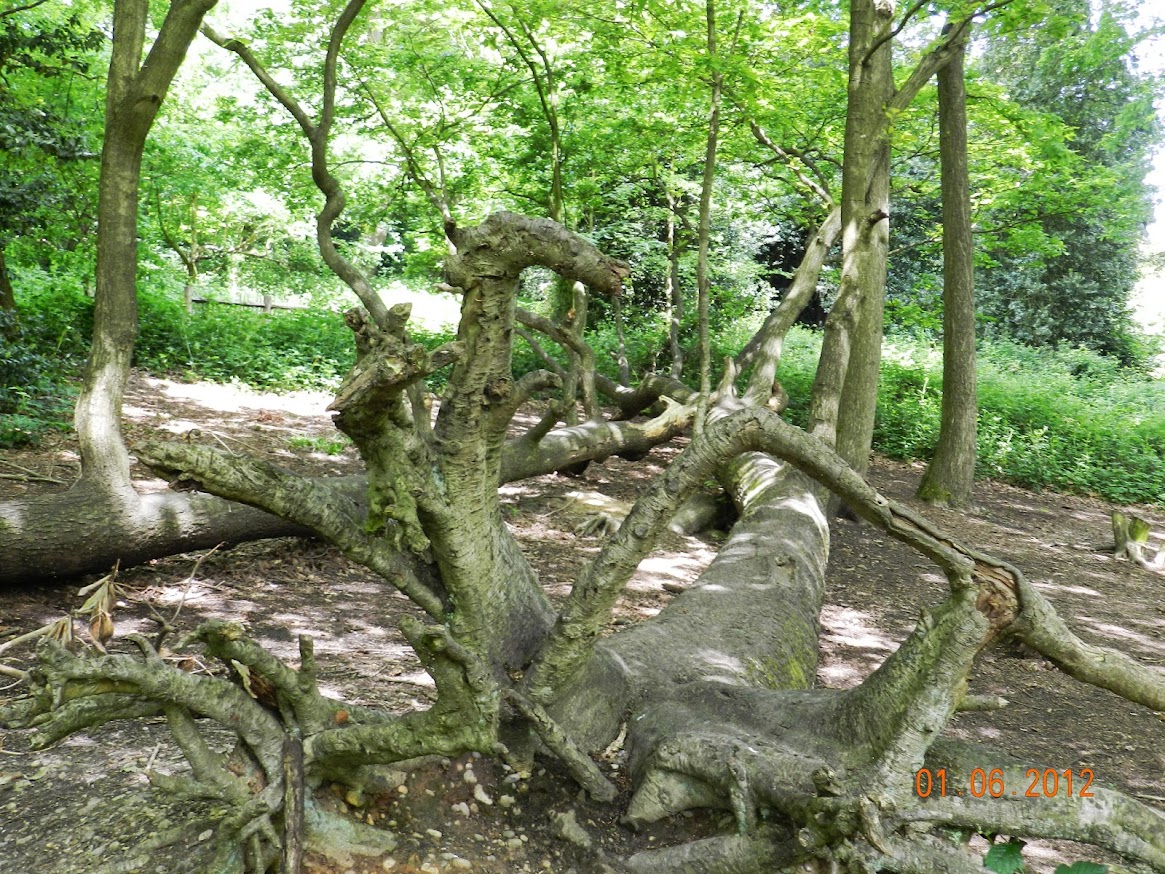 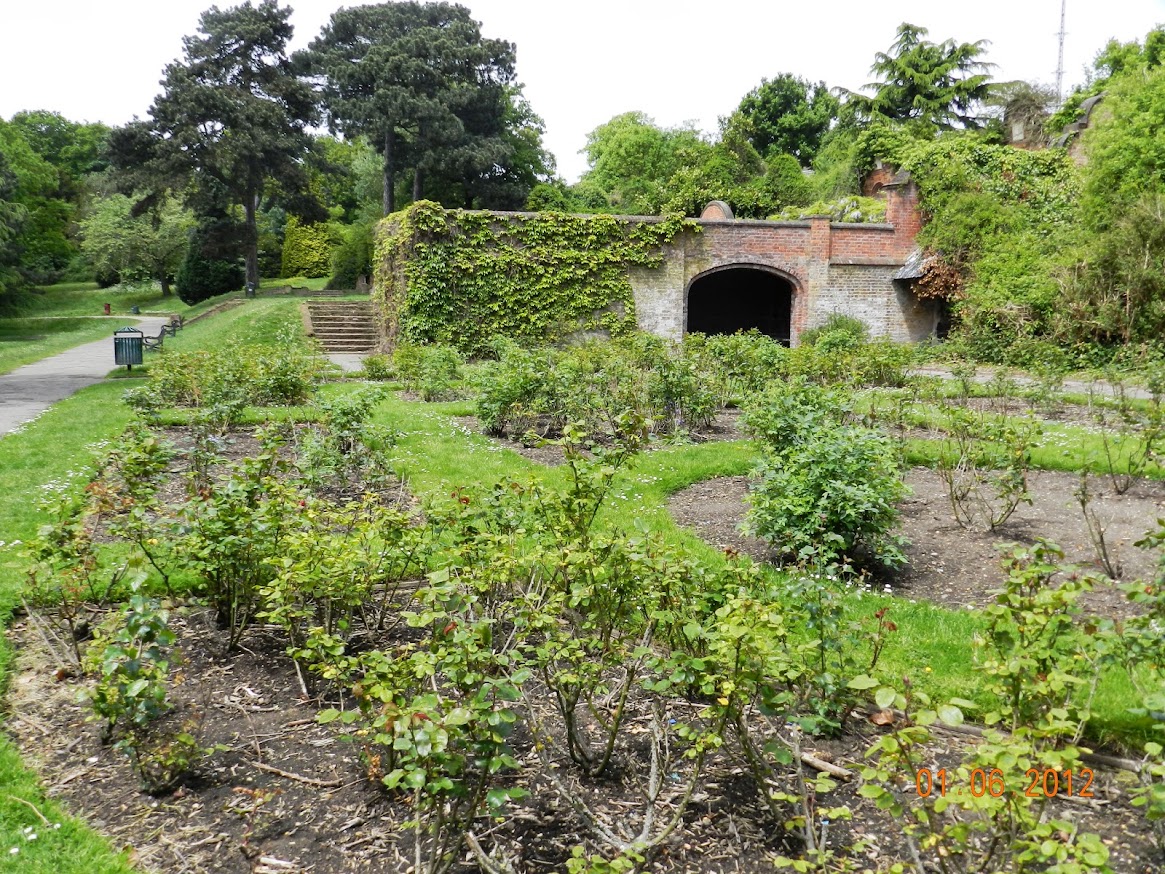 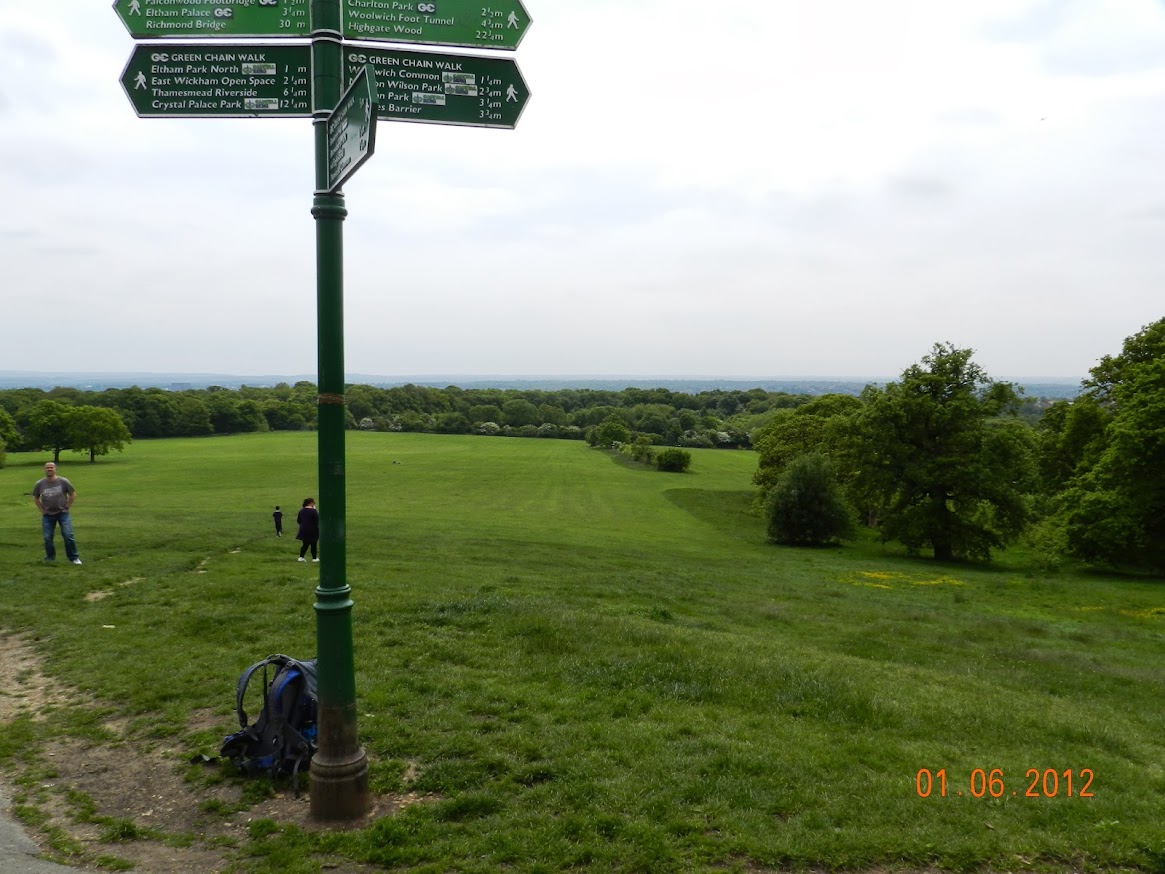 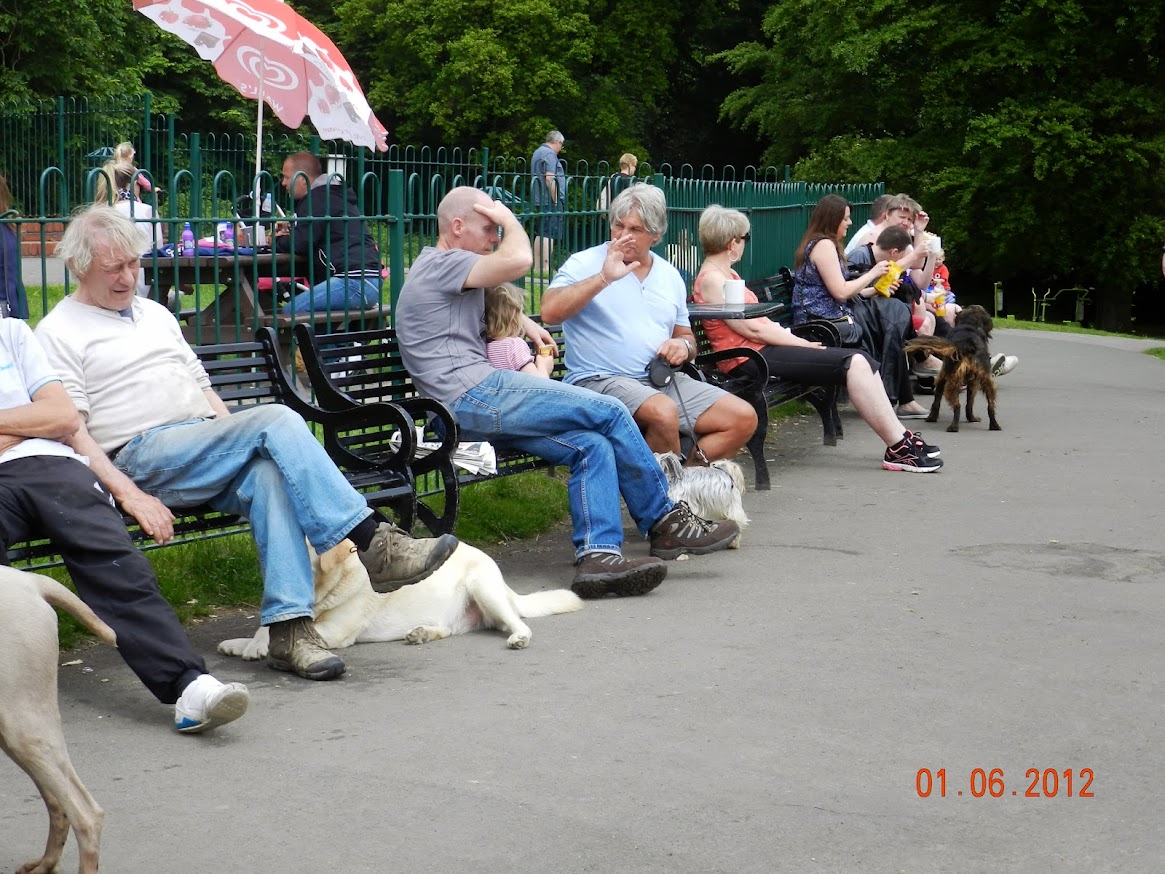 Continue on to Oxleas Wood and cross over Rochester Way and into the ancient Shepherdleas Woods, now part of Eltham Park North: 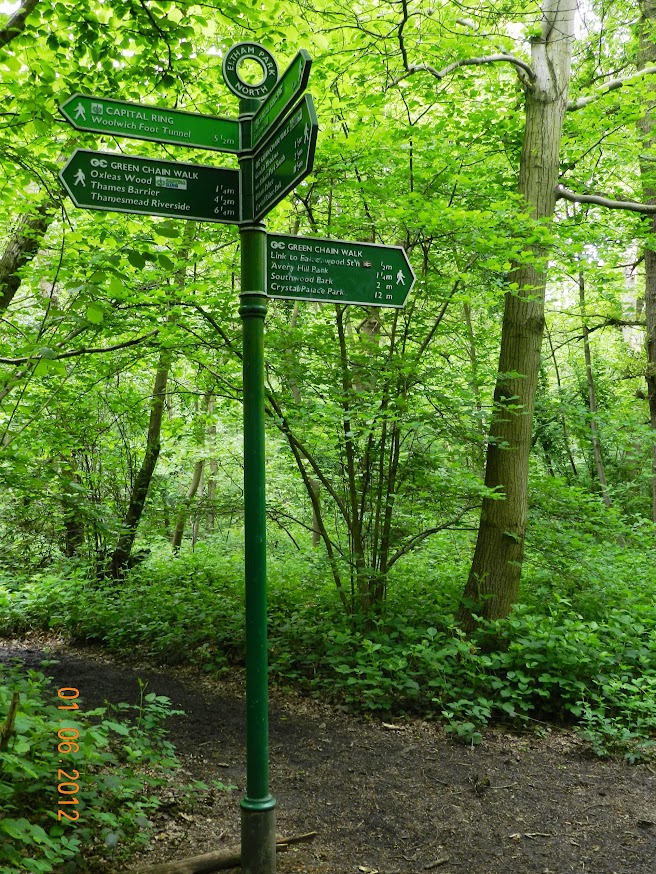 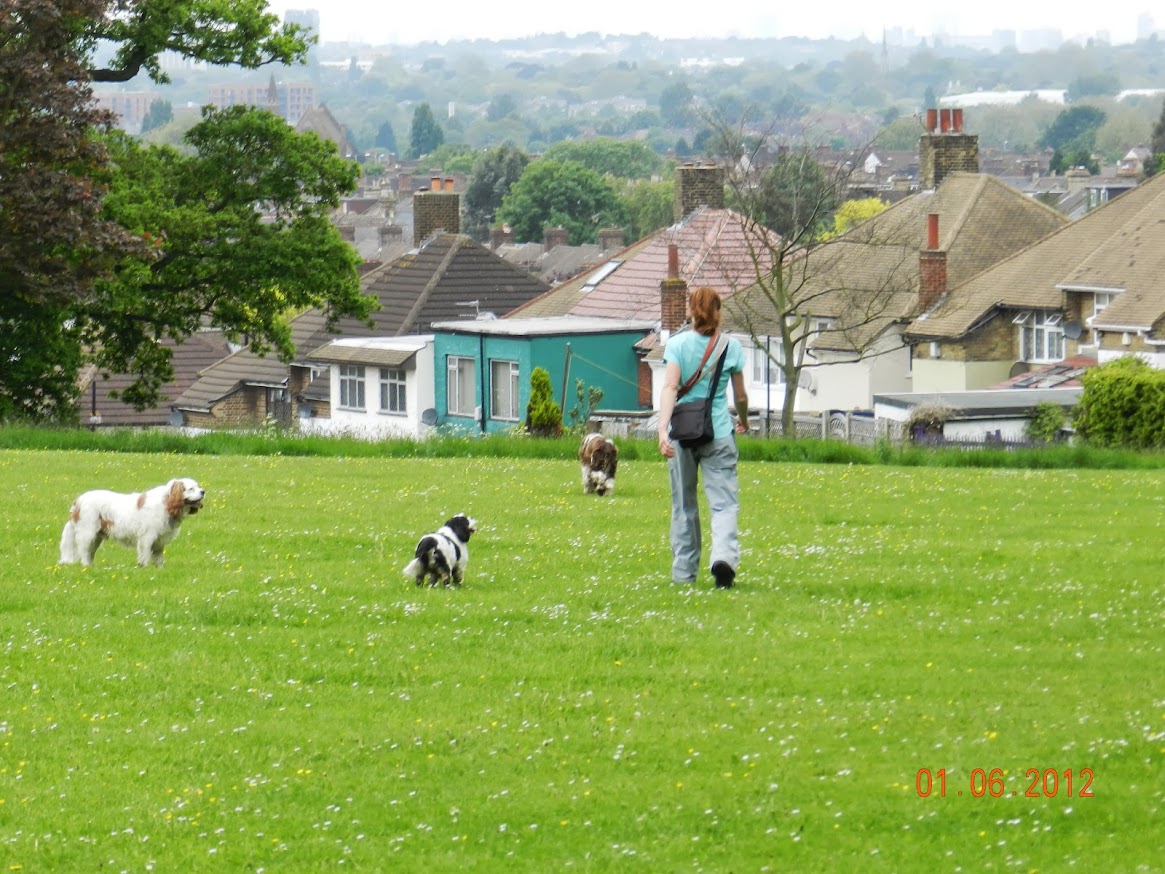 The last section of this walk follows a path through the trees: 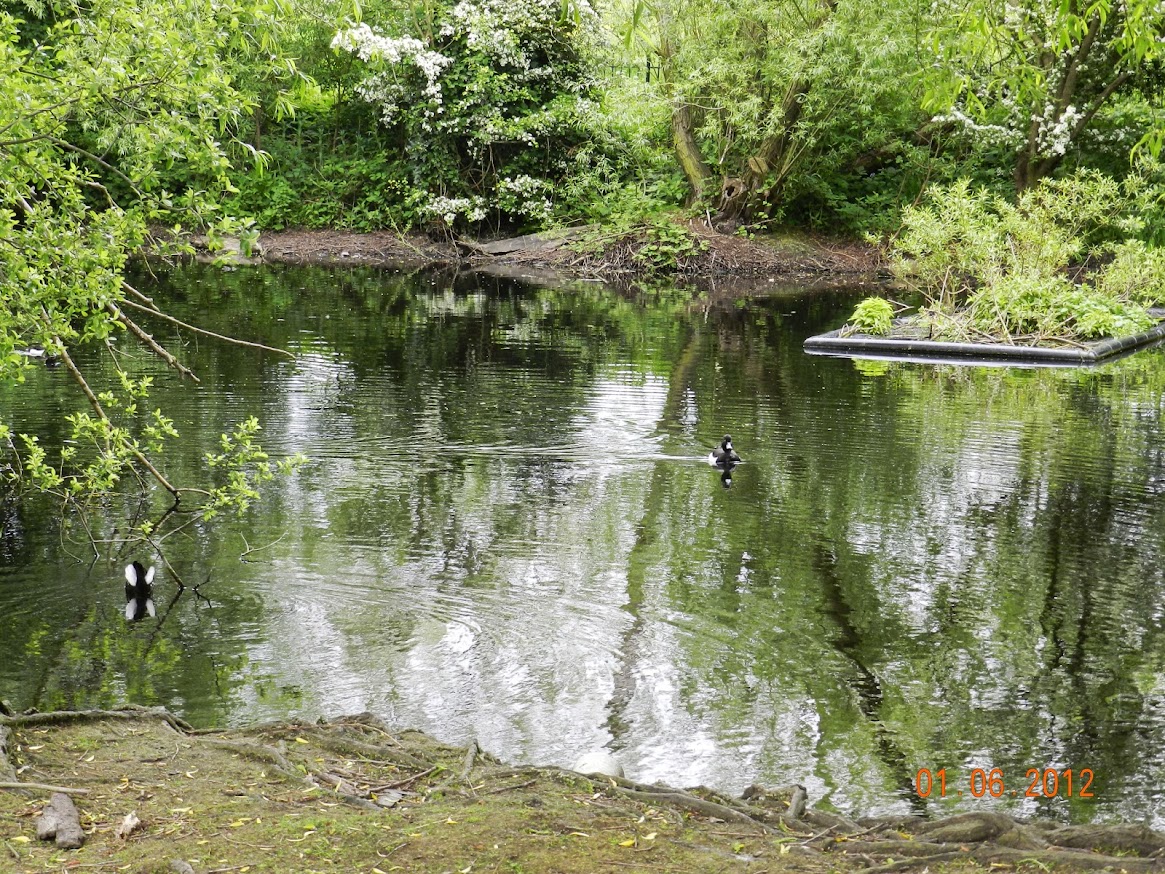 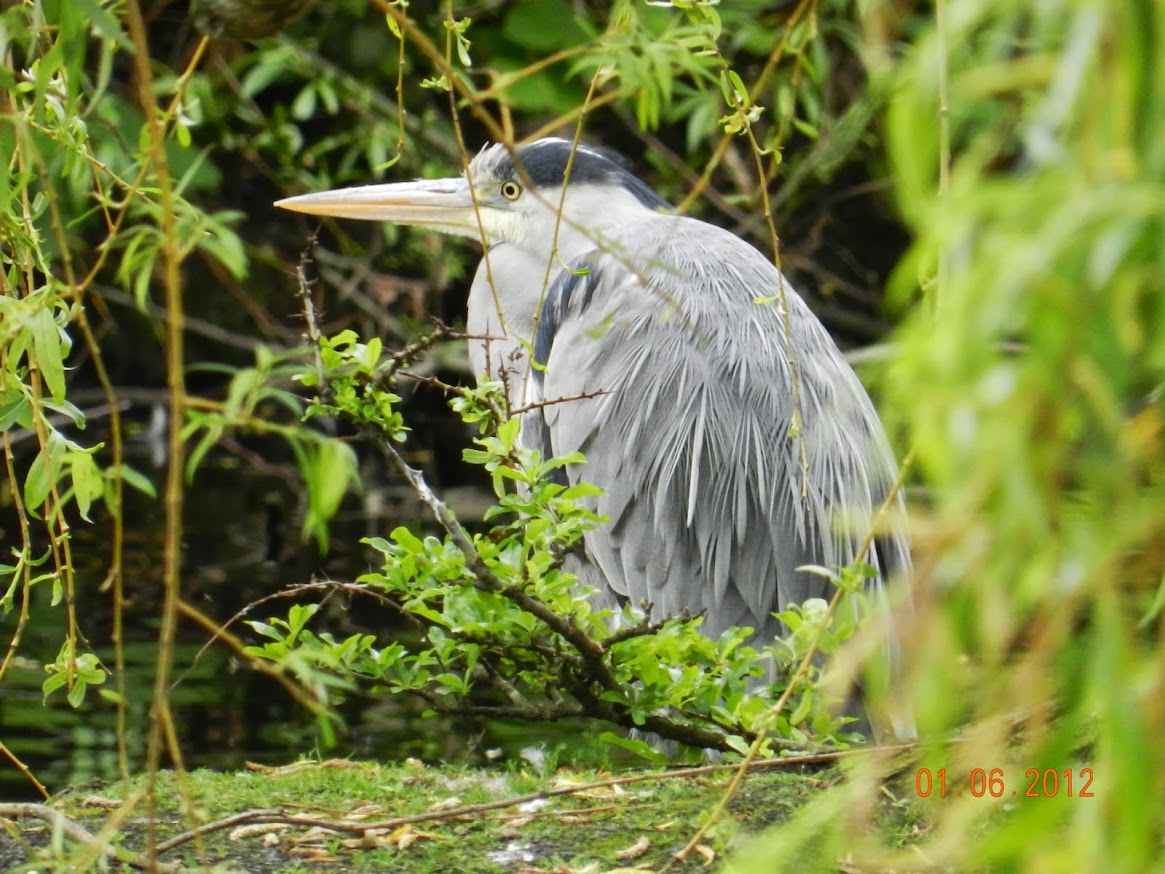 Here either turn right to cross over the road on Falconwood Bridge to get to the start of Section 2 of the Capital Ring or go on ahead to Falconwood Railway Station.