Directions: There are several ways to arrive to Greenwich (from Central London) - most of them are amazing.

1. Cruise - Join a boat of Thames Clippers (departure from London Eye or Westminster Bridge). A must ! The boat stops at North Greenwich (near the O2) or at Greenwich Pier - a few metres from all Greenwich attractions. There is a special Blog on this journey in Tipter unter this trip.

4. Come with the Natioal Rail train to Greenwich station. 15 minutes pleasant walk to the Cutty Sark and the other attractions through St. Alfege church and Greenwich High Street.

5. I recommend you a fifth way: From wherever you are, travel to Deptford Bridge DLR station (Bank - Lewisham DLR line). After descending Deptford Bridge DLR stn. steps - turn left and take a 53 bus heading to Blackheath Hill. The 53 bus runs every few minutes.You get off at Greenwich Park (one stop after Charlton Way). 5 minutes walk and you enter the park by the main entrance. Walk through the gates, famous as the scene of the start of the London Marathon, and walk straight ahead to the Rose Garden and other flowers beds.

This Tip sticks with the Direction 5... Greenwich Park is lovely (still recovering from the Olympic egames) with a wonderful view of Greenwich's historic waterside buildings and a panorama of London north of the river. Historically, it was the grounds of the royal palace and still a Royal Park. It is better to start with the park, on top of the hill and then, walk down the hill for the main attractions.

After passing te Golden Gates of the Greenwich Park, the Ranger House, the Rose garden and flower beds - you are now standing and gazing at one of the world's most beautiful views: fantastic view of Canary Wharf and the O2 from the famous hill of the park. Downstairs , that's Greenwich, the Thames and London. On a fine day most of London can be seen from here. 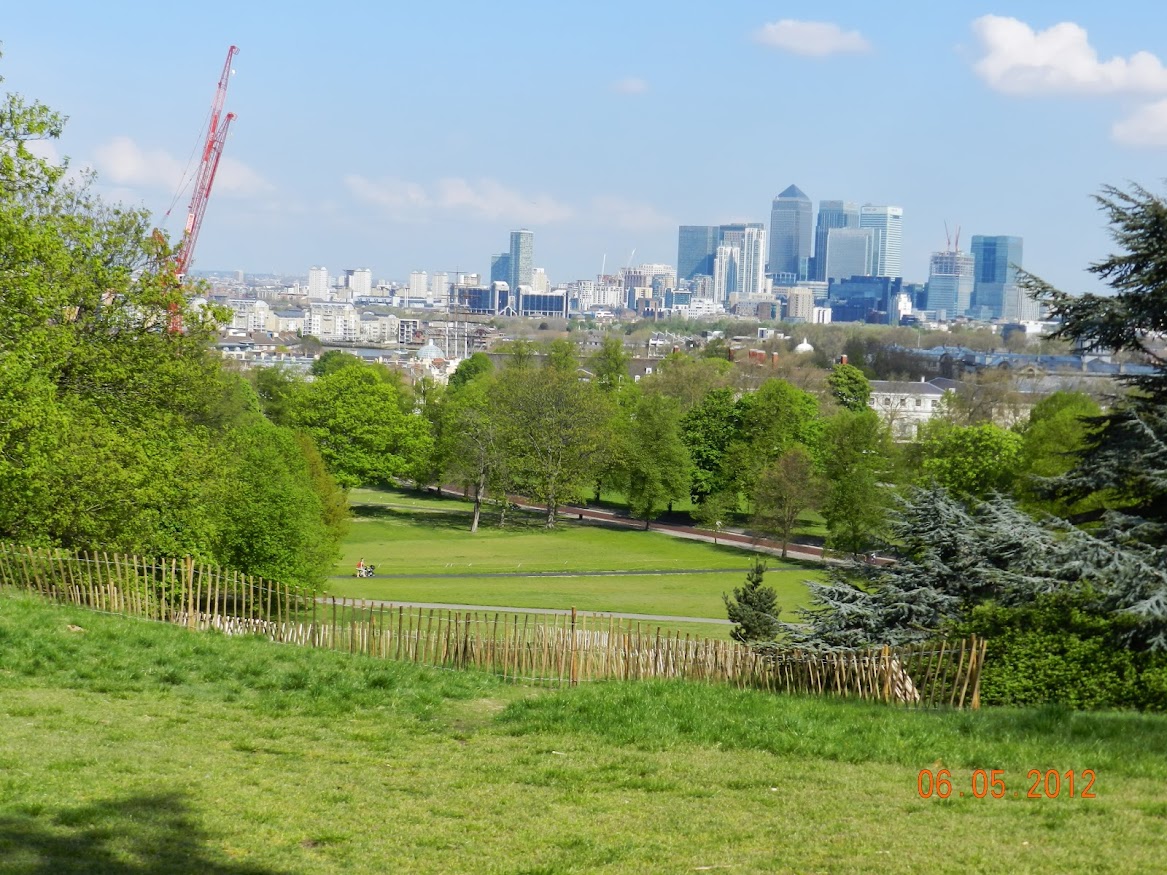 On top of the same hill with the wonderful panarama of London and the Thames is a statue of General James Wolfe, (1727-59) looking out towards the river. General Wolfe led the British forces at Quebec against the French and won a great victory, at the cost of his life. He was a resident of Greenwich and is buried in the parish church, St Alfege's. 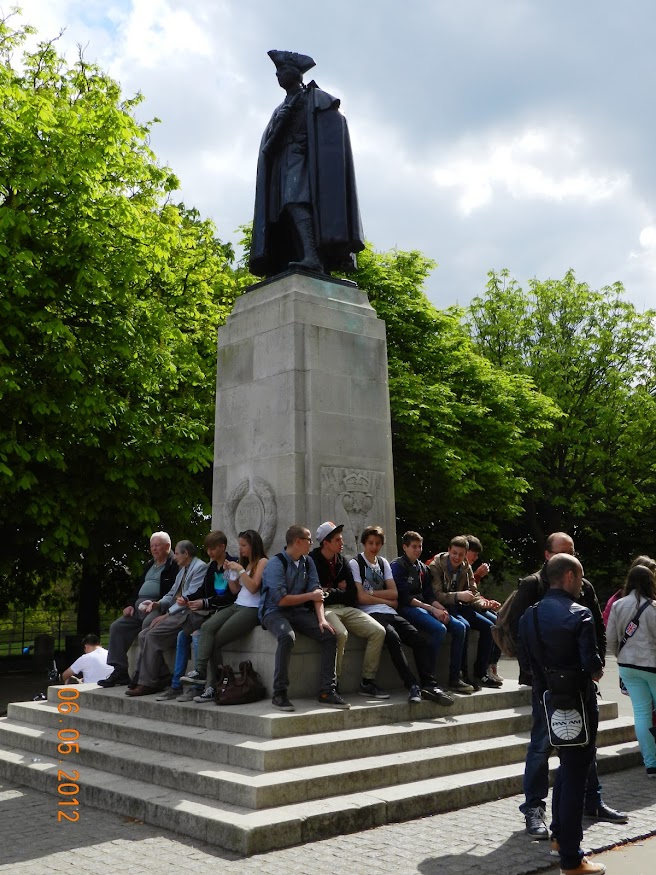 View of Greenwich, London and the Thames from the steps of the statue - 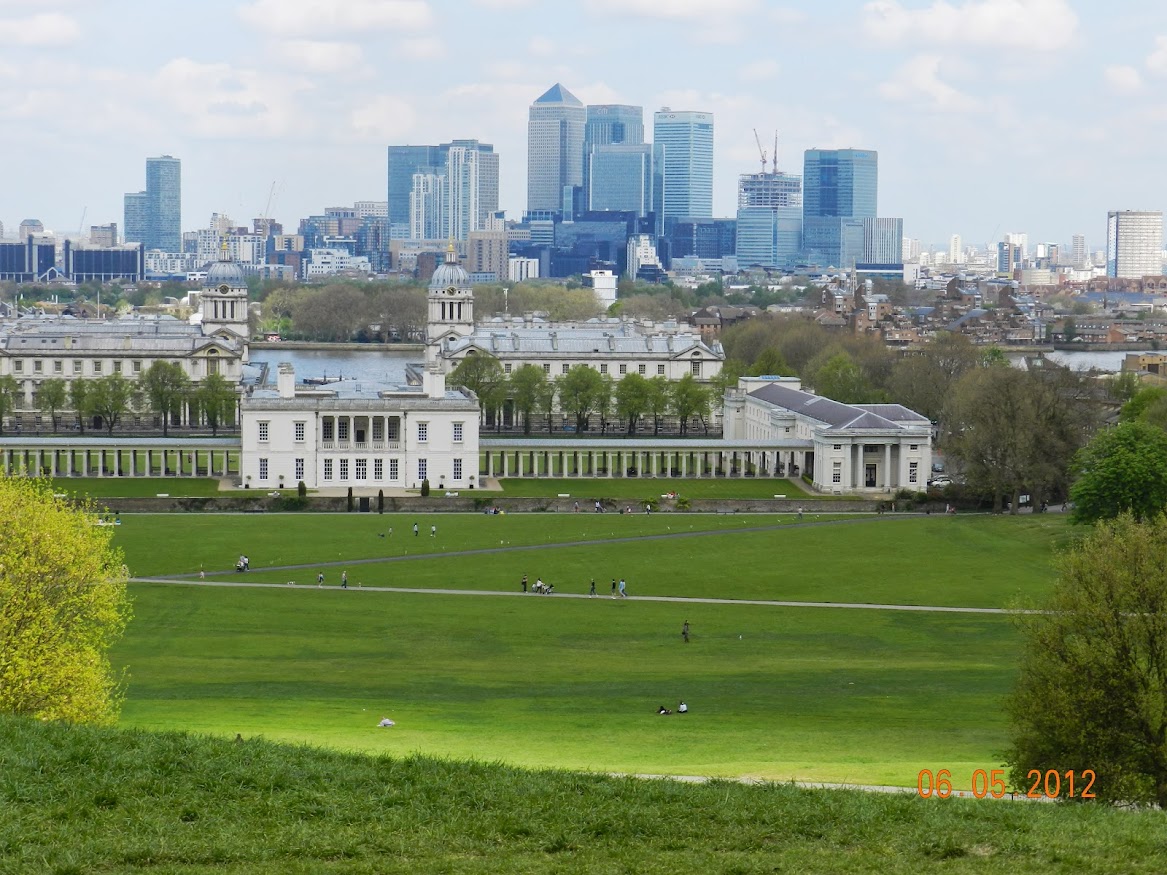 The Greenwich Royal Observatory was founded by order of King Charles II to study astronomy. The oldest in the group of buildings comprising the observatory is Flamsteed House. It was built in 1675. The time ball on the roof was first erected in 1833, providing the first public time signal. Opening hours: 10.00-18.00. Entrance to the Astronomy Centre: free, To the Flamstead Bldg. and the the Meridian Courtyard: 7 GBP. 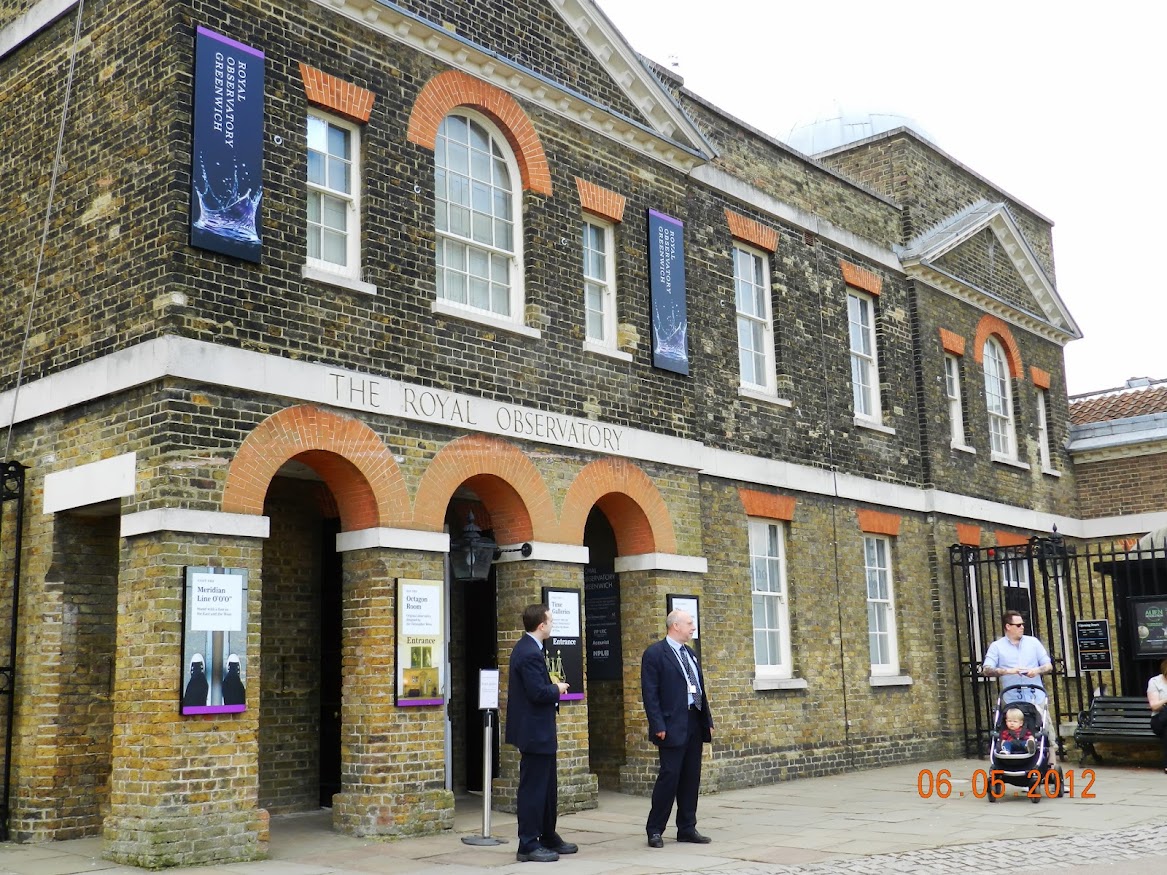 Other buildings include the Meridian Building, which is really three, built between 1749 and 1855, and the Great Equatorial Building with its onion-shaped dome. This was built in 1857, with a dome installed in 1893. The dome was severely damaged during the second World War, and the existing dome was erected in 1975. The meridian that divides the Earth's eastern and western hemispheres passes through here. Tourists aree photographed here standing with a foot on ether side of it. 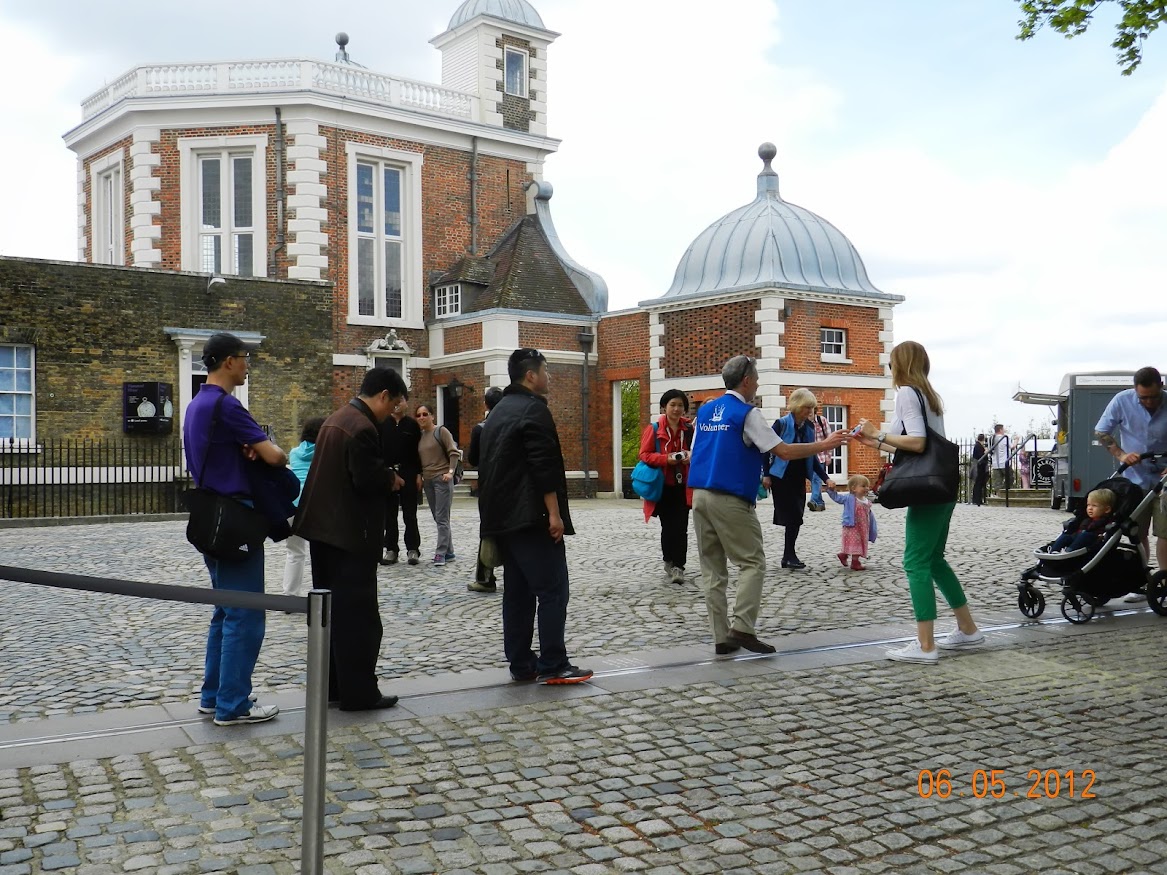 In year 1884, Greenwich Mean Time became the basis of time measurements around the globe. 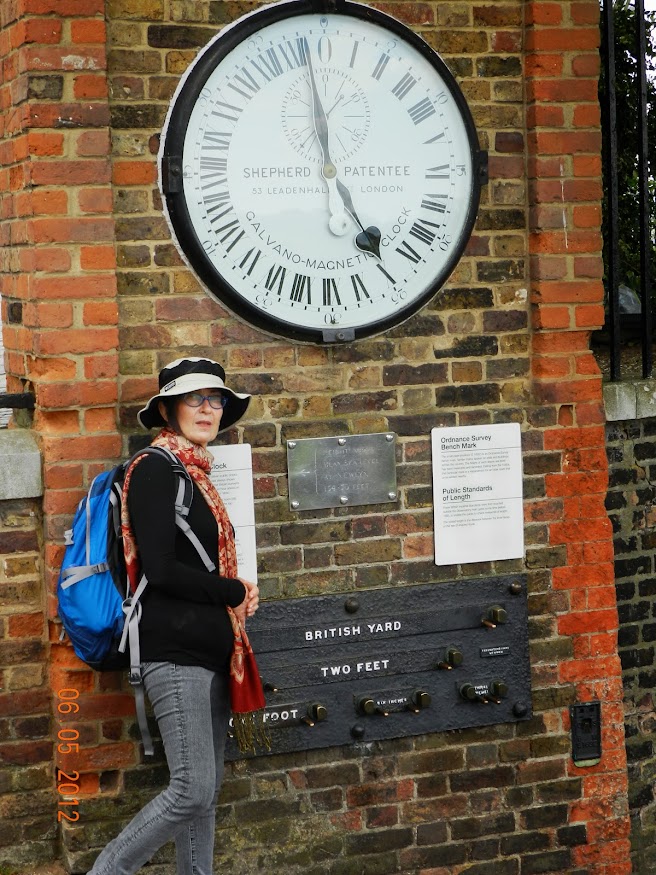 Next to the Observatory buildings is the new (opend in 2007) Peter Harrison planetarium which employs the latest space exploration technology. This is a state-of-art Planetarium - the only one in Londn. 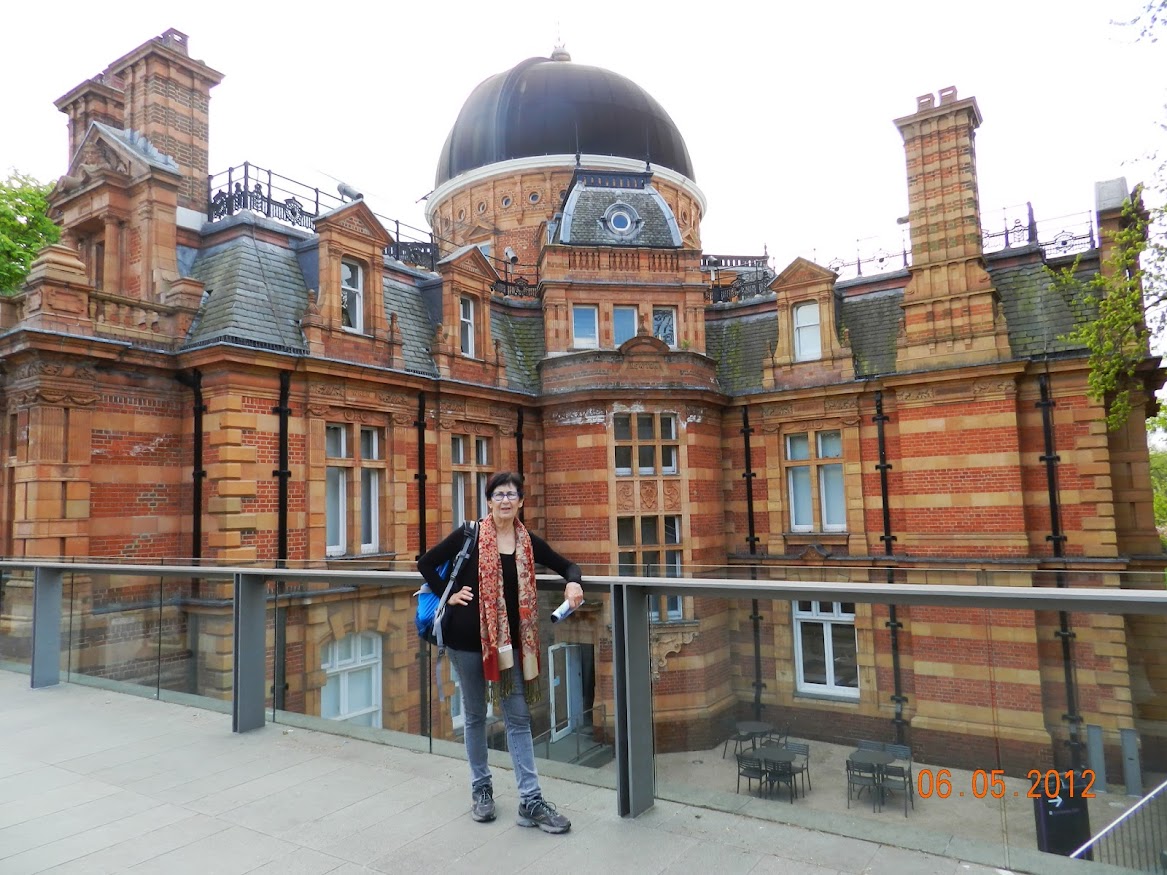 Now you walk downhill, through an impressive avenue of ancient trees - heading to the Maritime Museum. It is the world's largest maritime museum. Free admission. It includes a vast collection of everyting associated with the sea. Plenty of exhibition. Bright and airy museum with 3 floors of exhibits. 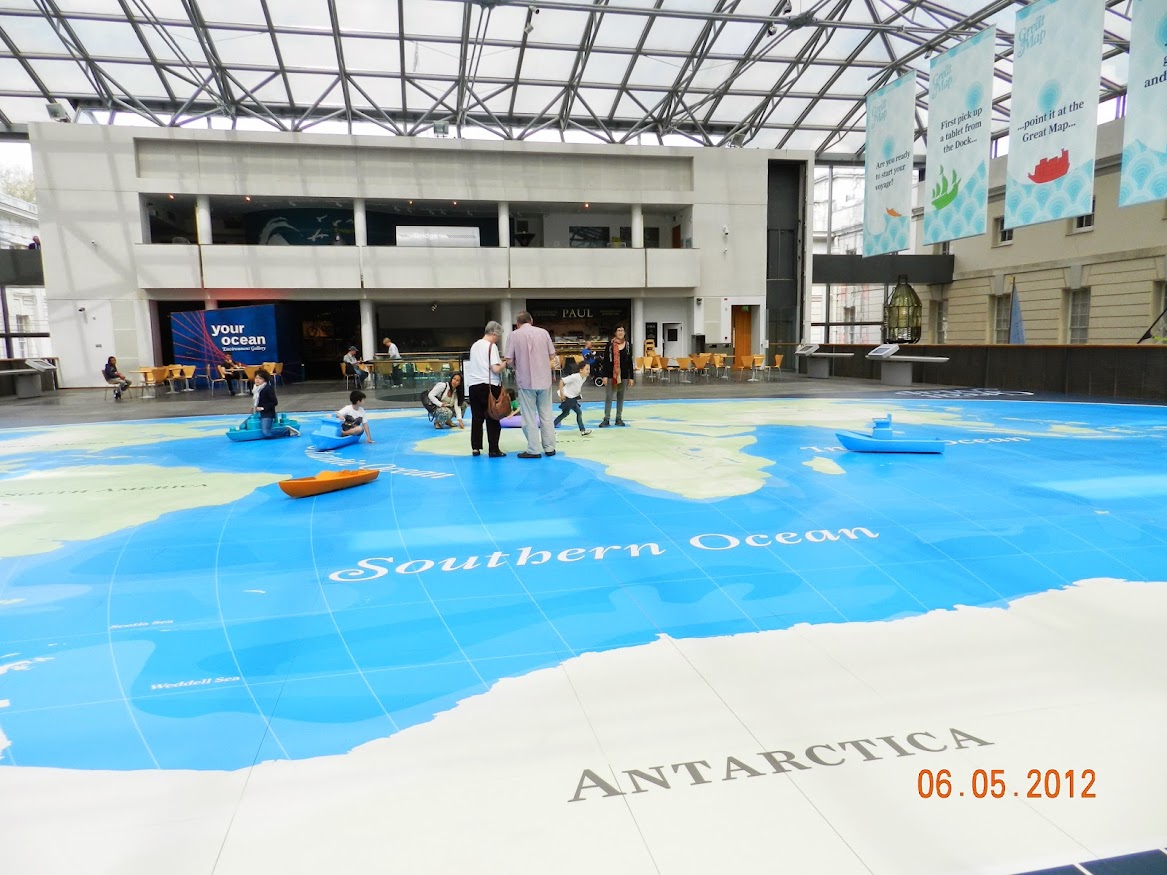 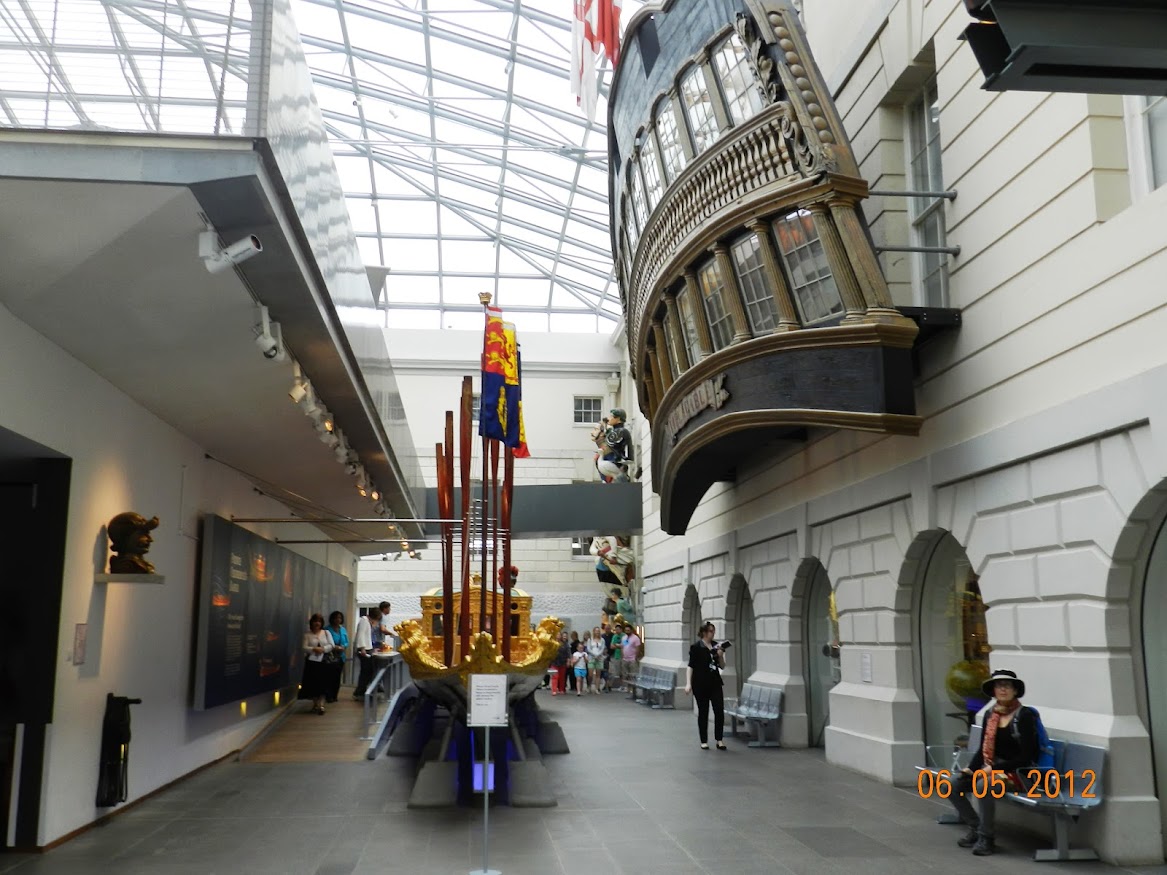 On permanent display, in front of the Maritime Museum is the Yinka Shonibare's "Ship in a Bottle". It has been moved from Trafalgar Square in April 2013. 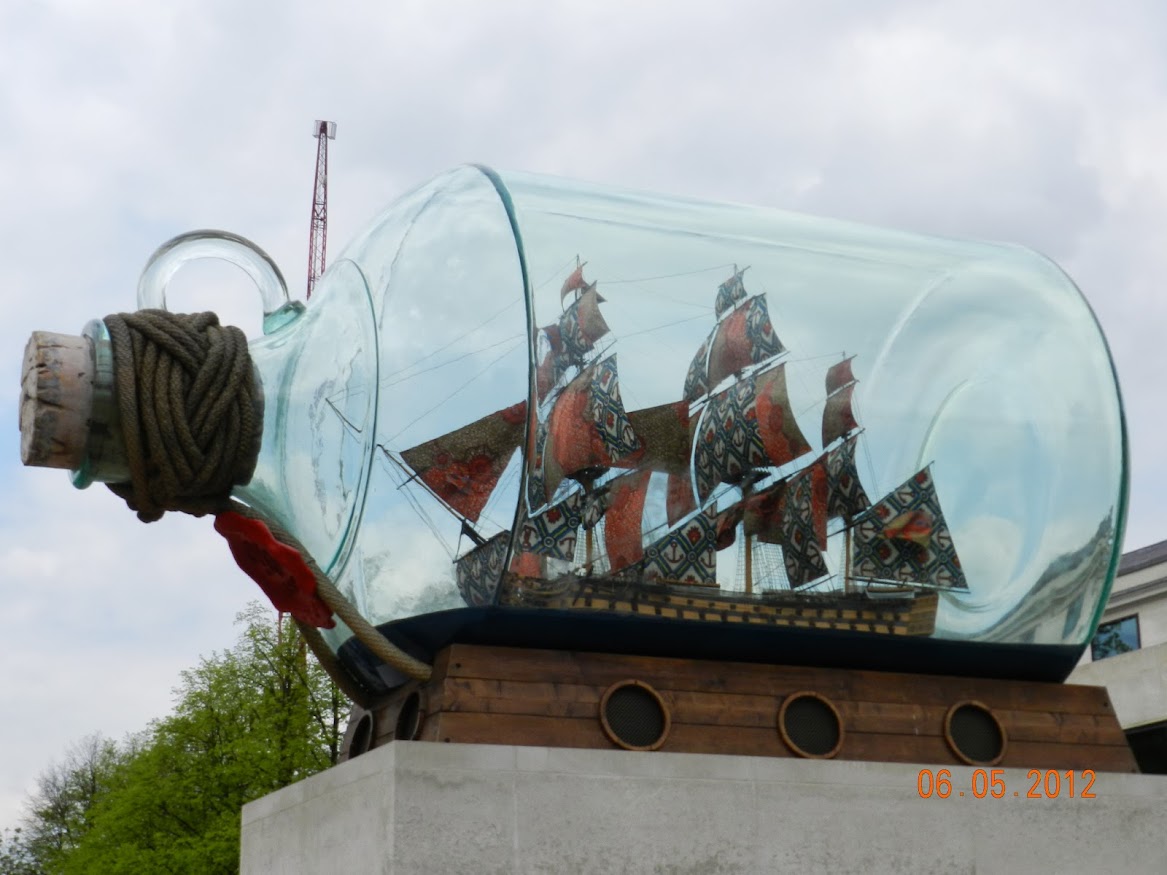 Greenwich Queen's House has less broad appeal than other Greenwich big hitters.  The Queens House has an interesting collection of paintings including one awesome Turner, famous portaraits of Elizabeth the First, Henry VIII, a couple of Van Dykes etc'., Do not miss the beautiful Tulip Stairs, and the lavishly painted Queen's bedroom and the geometric patterns in the cubical Queen's salon. Opening hourse: 10.00-17.00. Free. 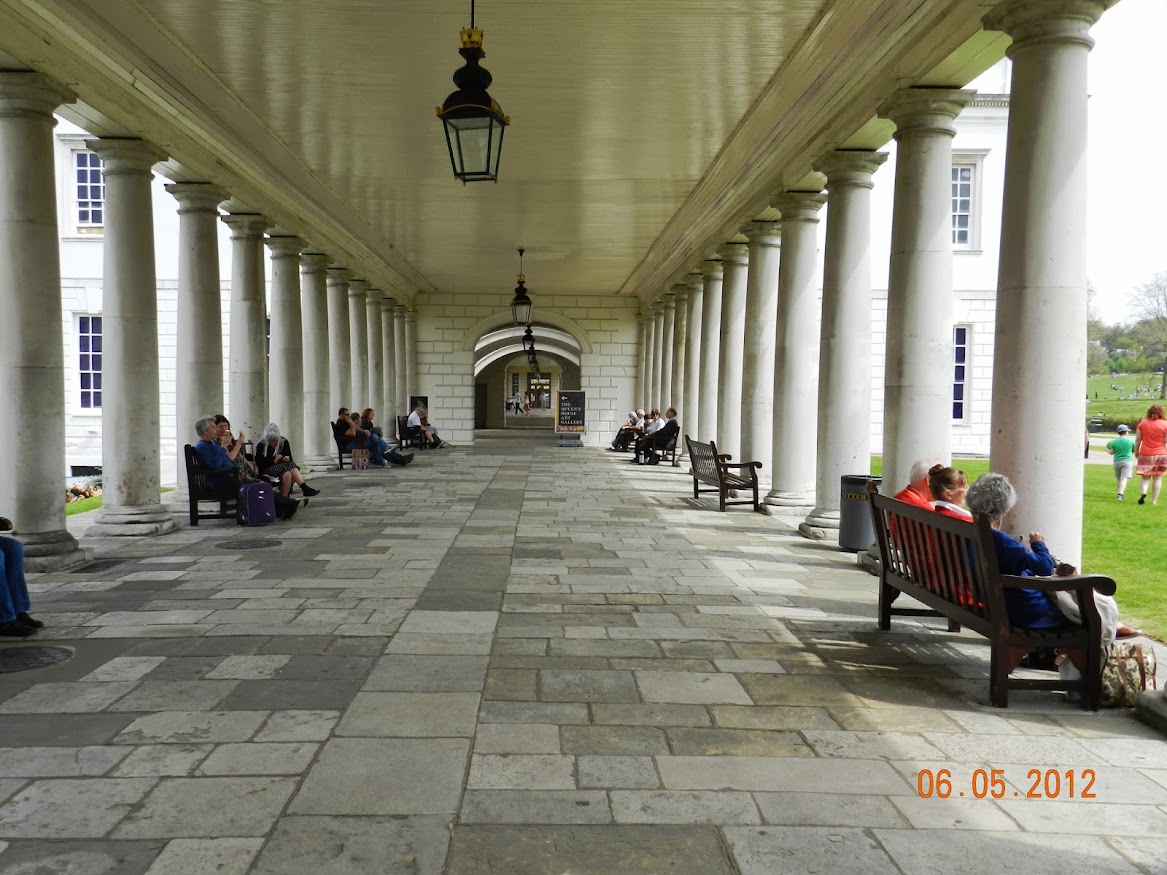 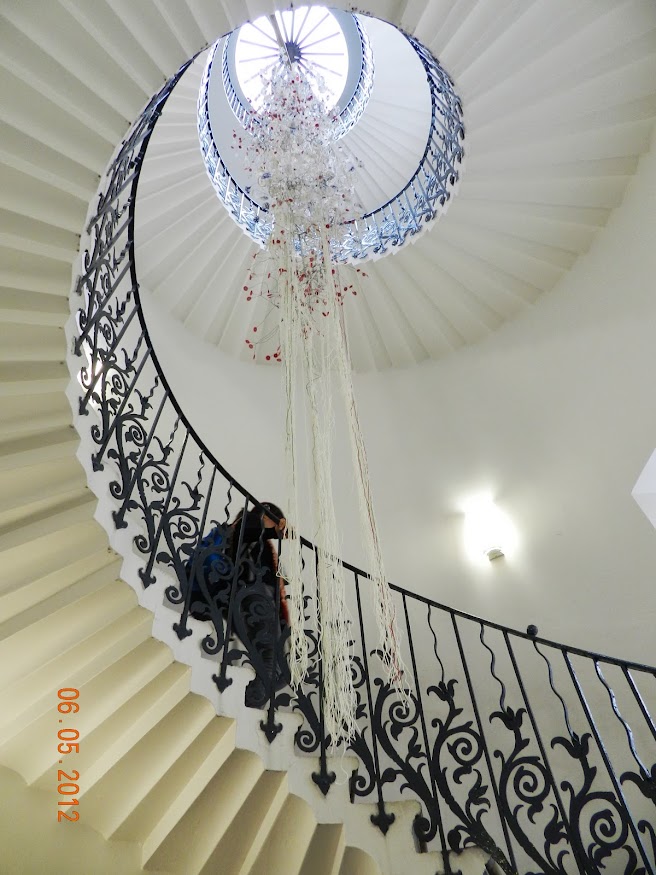 Now you approach King William Court with two buildings on both sides of the court: The Royal Naval College and the Chapel of St. Peter and St. Paul. For both of them - admission is free. Open daily 08.00 - 18.00

The Royal Naval College is an once-in-life experience: stunning architecture and breath-taking painted hall. The painted hall designed by Sir Christopher Wren in 1698, originally intended as an eating place for naval veterans. The interior was painted by James Thornhill. It took him 19 years to complete this masterpiece. In 1806, after the Battle of Trafalgar, the body of Horatio Nelson was brought to lie in state in the Painted Hall. A plaque marks the spot where his coffin was placed before it was taken for burial in the crypt of St Paul’s Cathedral. 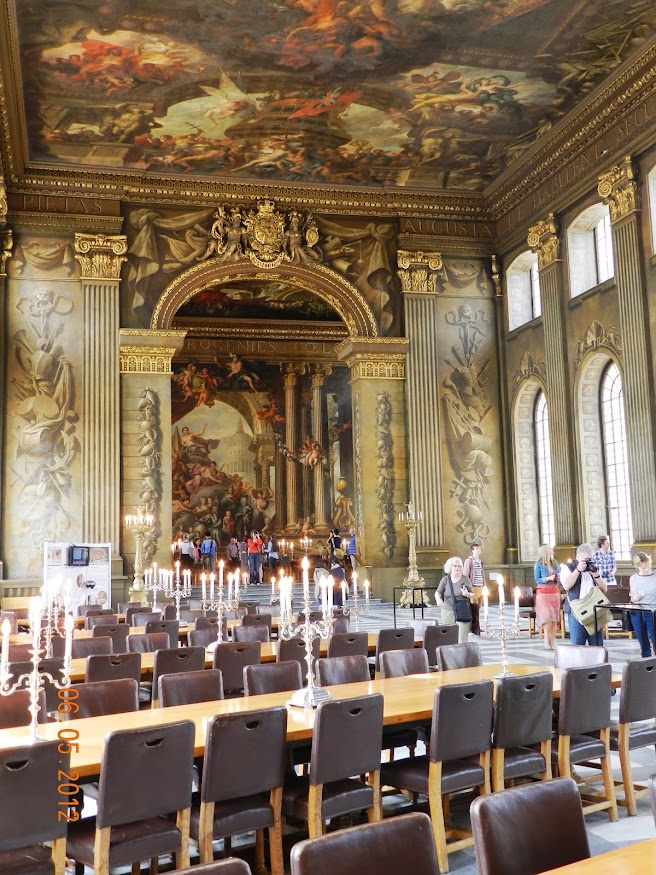 The Chapel of St. Peter and St. Paul was constructed by Thomas Ripley to the designs of Sir Christopher Wren. Originally, it was a major part of the Royal Hospital for Seamen to be built. Following a disastrous fire in 1779, it was redecorated by James ‘Athenian’ Stuart in the Greek revival style. Today it is a wonderful example of a complete neoclassical interior. The Chapel is often used for concerts thanks to its excellent acoustics of its glorious curved ceiling. 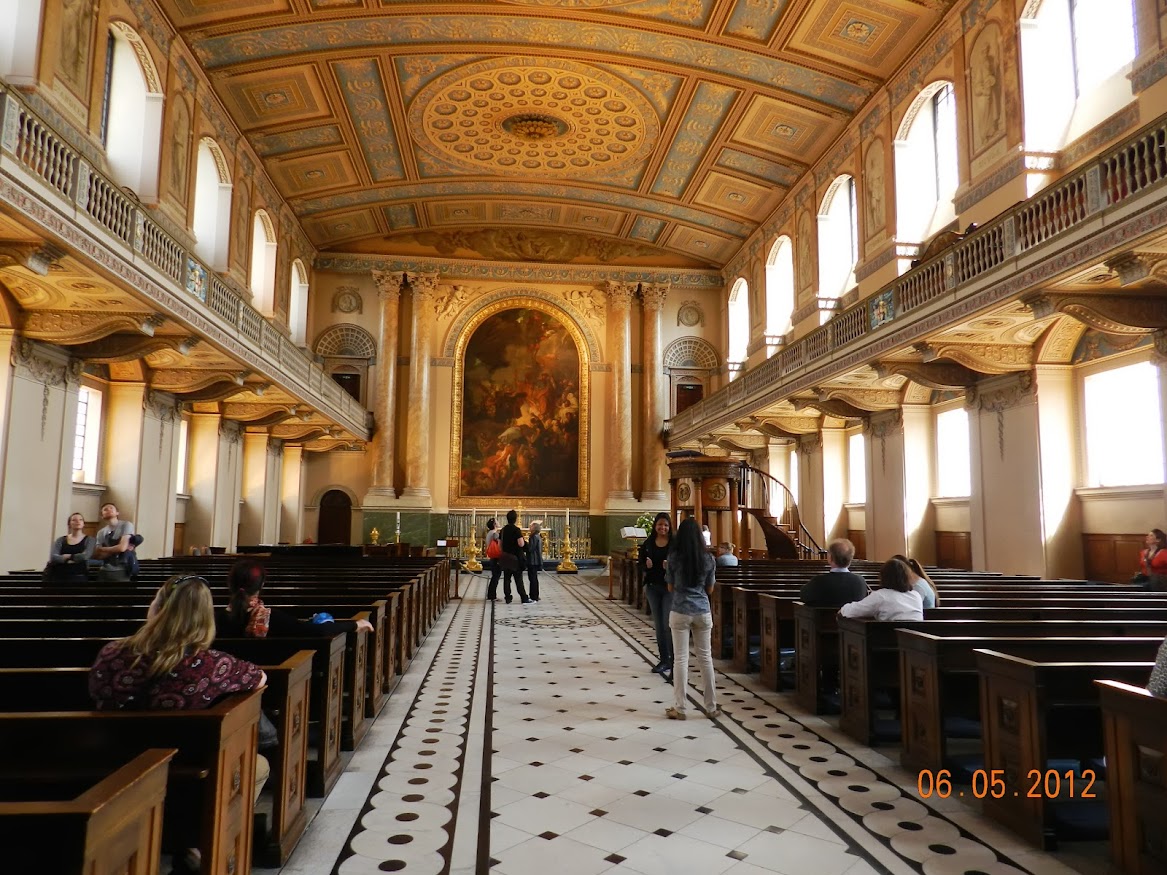 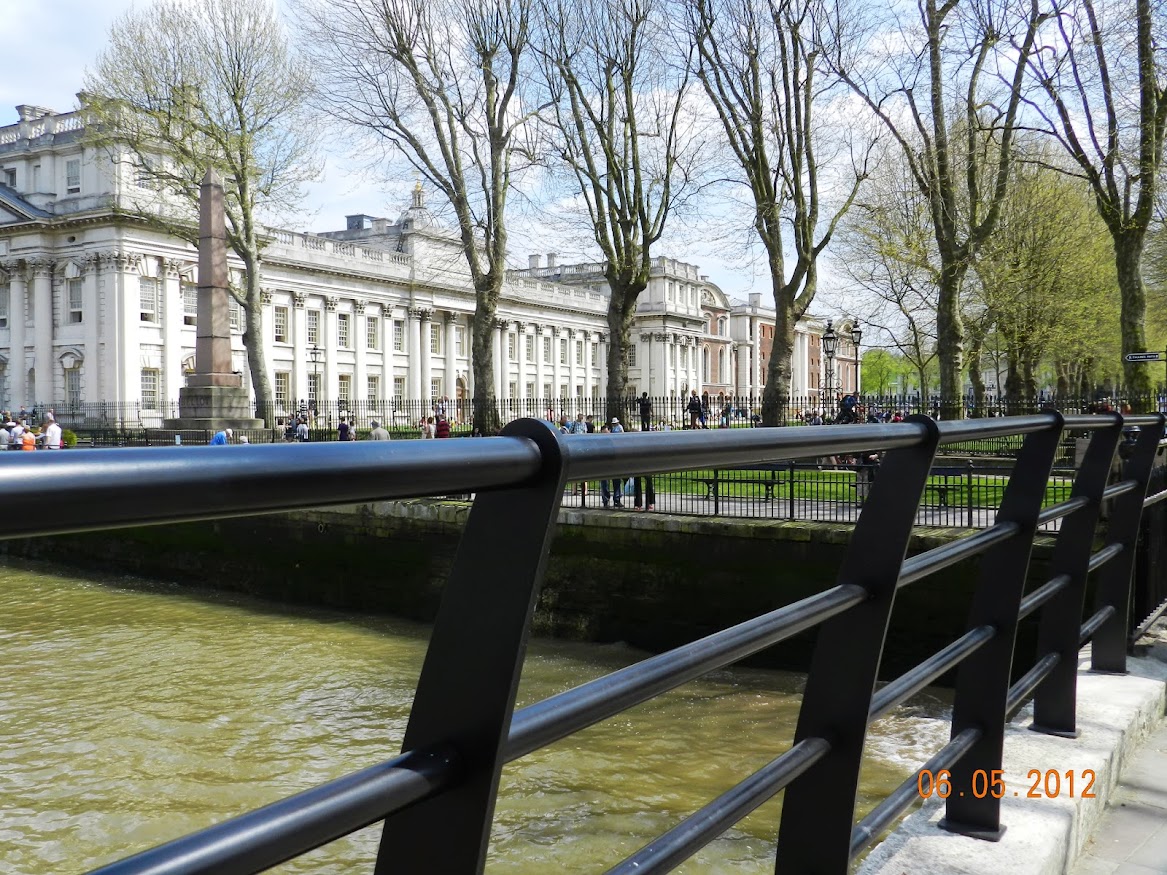 ...and from Nando's restaurant near the Cutty Sark: 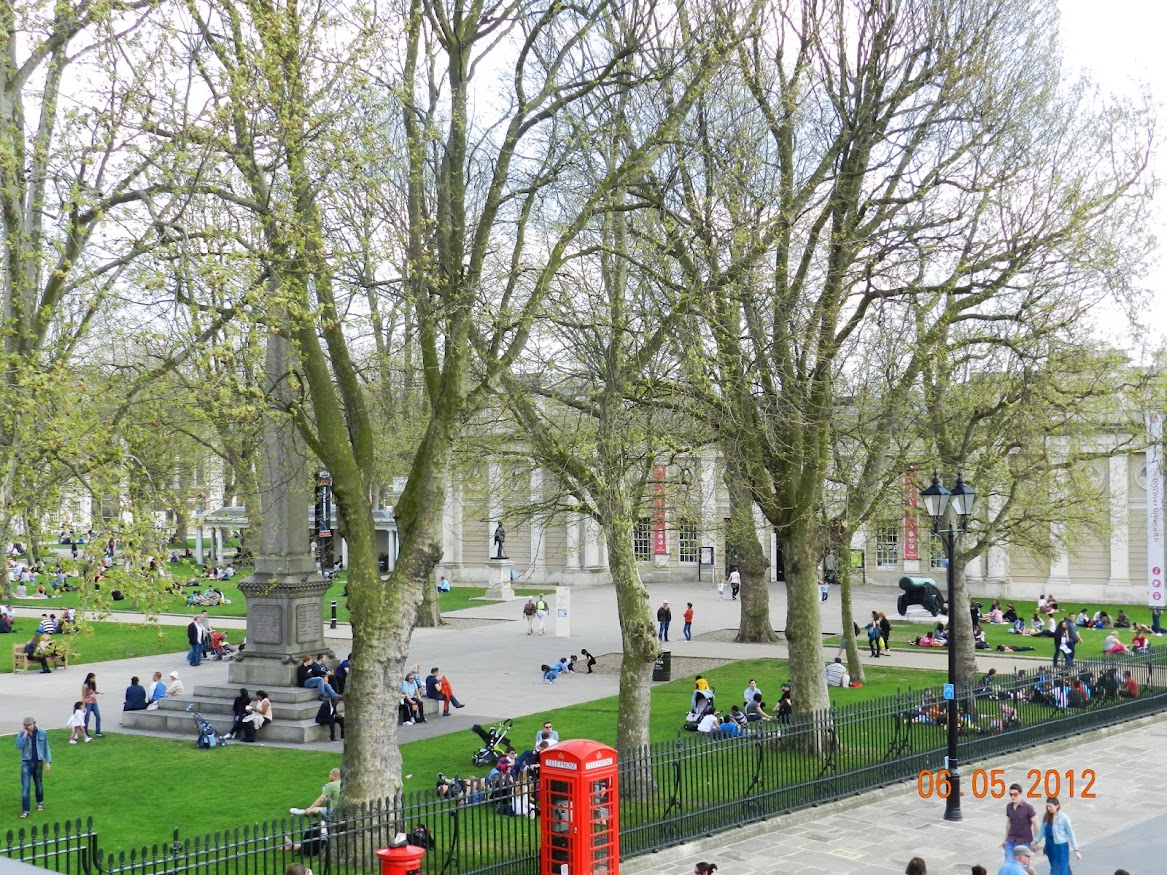 The Cutty Sark - The clipper built in 1869 gained its fame on the China tea trade. Later, it plied in the wool trade with Australia. It has been brought to Greenwich in 1954. The name "Cutty Sark" means "Short Shirt" derived from Robert Burn's poem. en: 11.00-17.00. 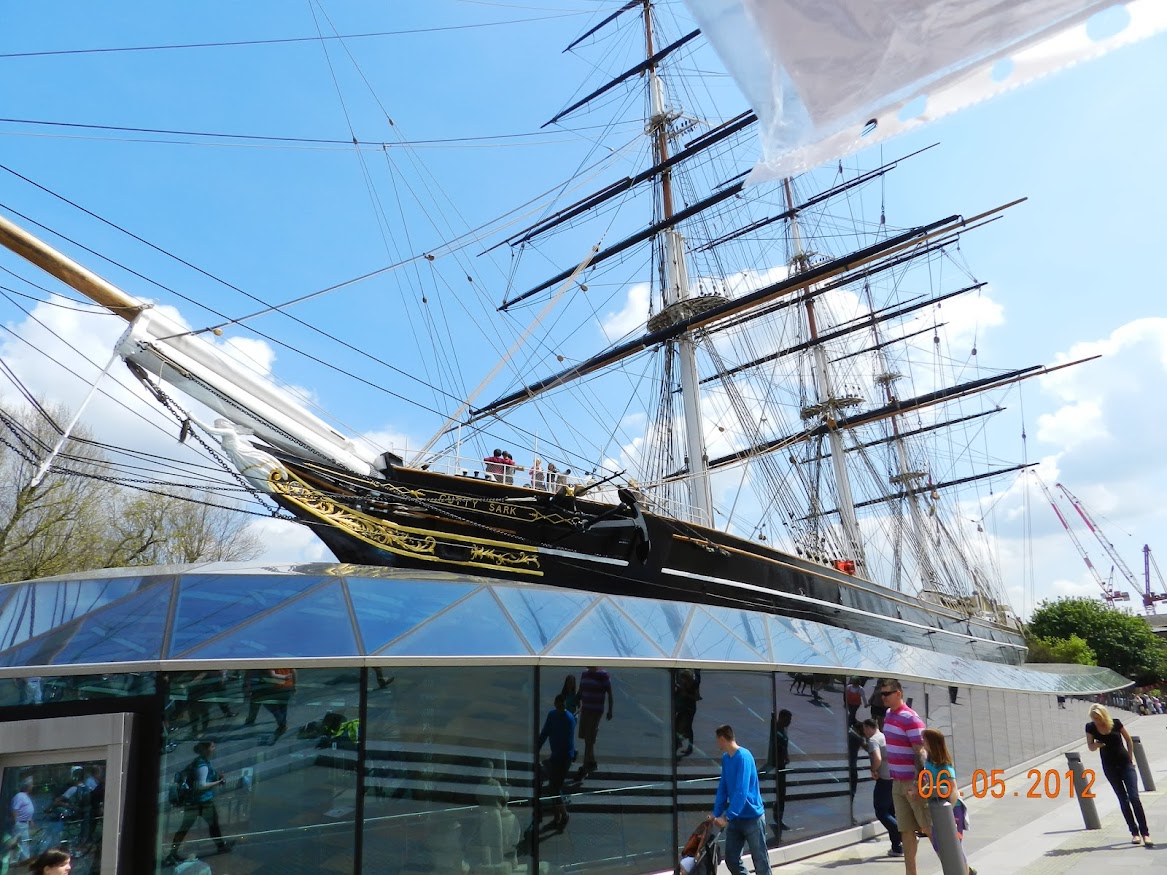 Well known for its designer makers and customers can found items that cannot be found anywhere else in the world. It is regarded as one of London's best markets. 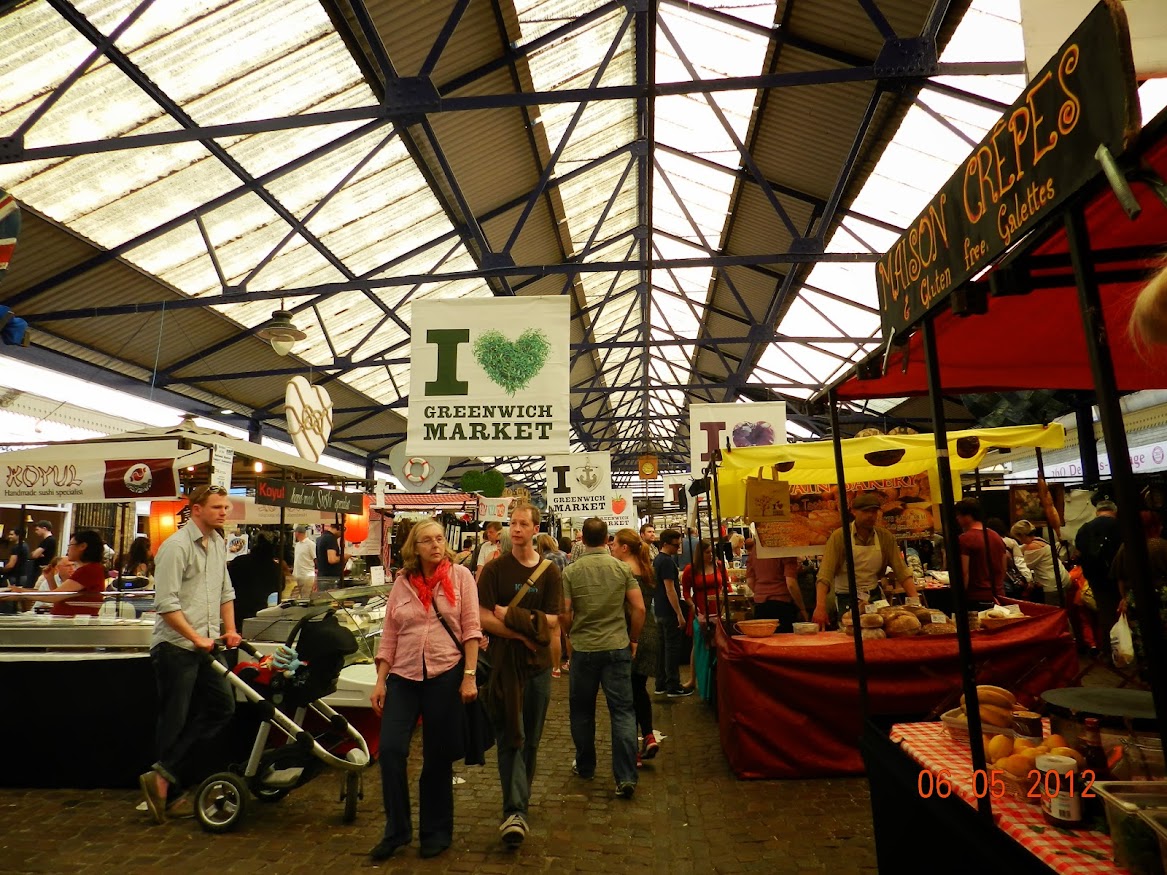 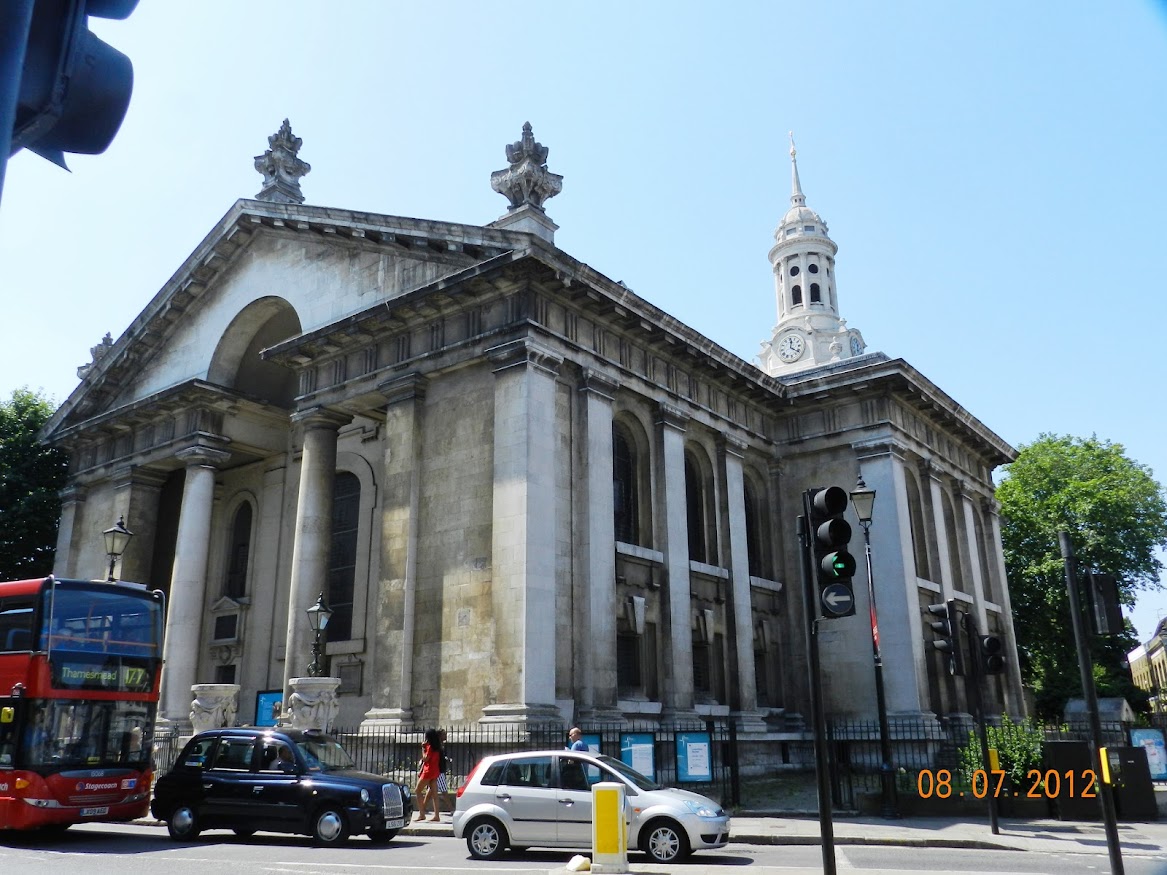 Located in a superb place on the riverfront by the Cutty sark clipper. Best in a British Spring or Summer day. Solidly-done food with no surprises. You sit on the roof terrace with stunning views of the Cutty Sark, Greenwich Universty grounds and the Thames riverfront. Chickens are tender and almost perfectly grilled. Generous portions. Very good service and staff members.