Introduction: This section starts at Priory Gardens, near Highgate Station. Although this is a densely populated area, surprisingly this walk is one of the greenest parts of the Capital Ring. This is largely achieved by following most of the Parkland Walk - London’s longest nature reserve - along a former railway line. It is easy walking on firm paths and pavements, with a steep climb including some steps at the start; this can be avoided on an alternative route. After the Parkland Walk, the route passes through the beautiful Finsbury Park, along by the New River – created as a canal four hundred years ago - past Stoke Newington Reservoirs, into the attractive Clissold Park and finishes at the fascinating Abney Park Cemetery. There are pubs or cafés at Highgate, Crouch End Hill, Finsbury Park, Manor House, Woodberry Down, Clissold Park and Stoke Newington. Public toilets are at Finsbury Park and Clissold Park.

Directions: From Highgate Station ticket office, take the Priory Gardens exit, follow the road around to the right, using the right hand pavement to join the Capital Ring on Priory Gardens. Turn right up a narrow footpath between house numbers 63 and 65. Follow the main path as it climbs up through Highgate Spinney, keeping close to the left edge of the wood. At the road (Shepherd’s Hill) turn right onto the main road (Archway Hill). Opposite lies the former Highgate Methodist Church, now a community centre with café and toilets. Turn left for 50 metres then left again down Holmesdale Road. Follow the left hand side of Holmesdale Road as it bears right. At the next bend, go through a gate on the left and down a steep slope to join the Parkland Walk: 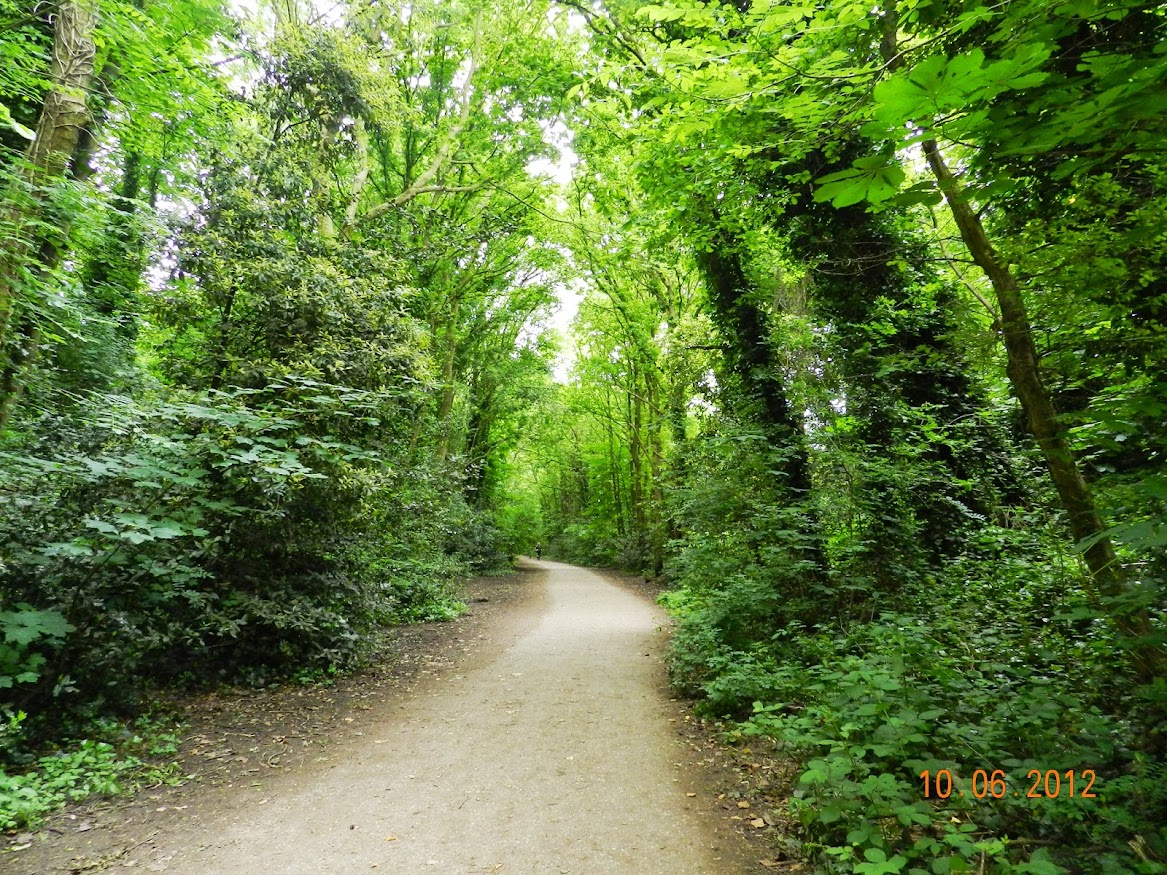 The railway line, now occupied by the Parkland Walk, ran from 1867 to 1970 from Finsbury Park to Edgware and Alexandra Palace. It is now a haven for wildlife with about 250 species of plants and the shy Muntjac deer living here. Follow the broad track ahead for the next two miles, crossing over or under several roads. At Crouch End Hill you encounter the eerie, deserted platforms of the former Crouch End Station. Continue under a bridge and on to some graffiti-covered arches: 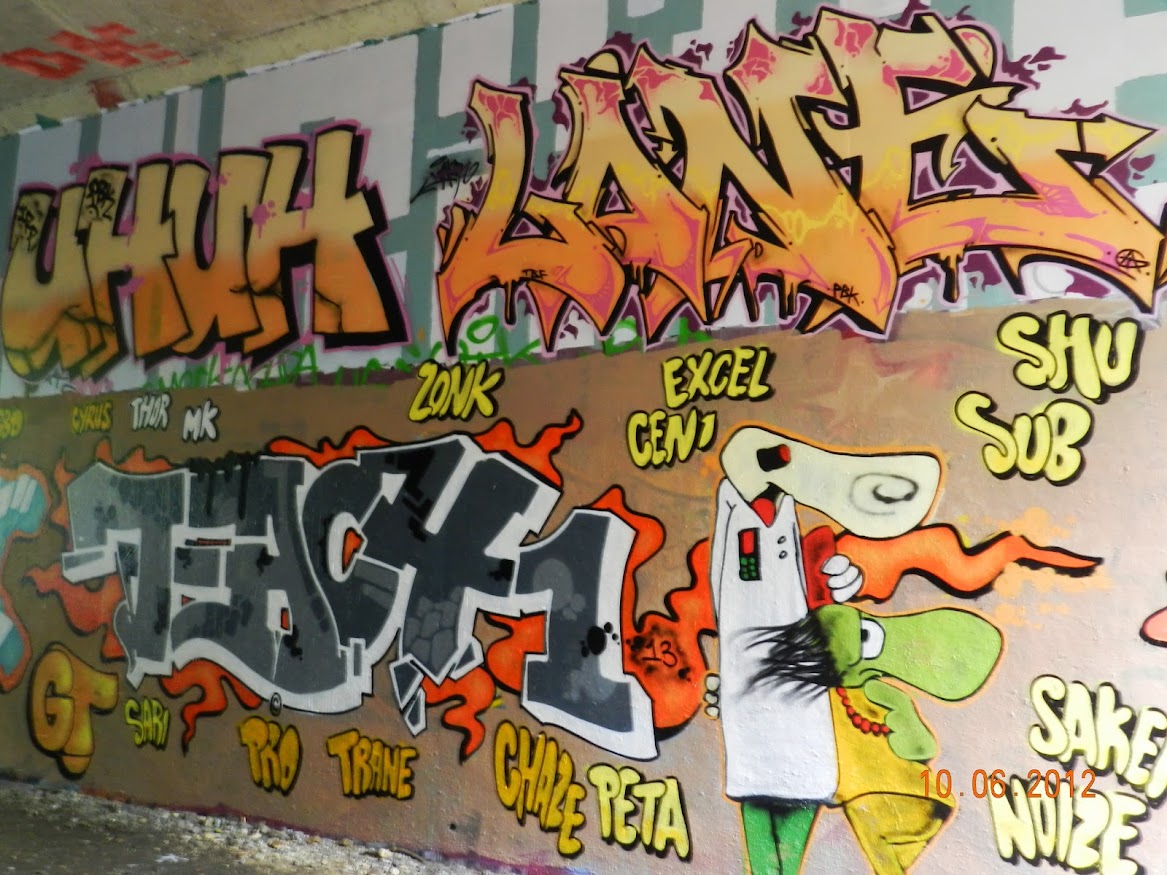 On the left, emerging from the brickwork, is the scary figure of a spriggan, a kind of goblin. Spriggans were grotesquely ugly, found at old ruins guarding buried treasure and generally acting as fairy bodyguards. They were also said to be busy thieves. Though usually small, they had the ability to swell to enormous size - they're sometimes speculated to be the ghosts of the old giants. They were said to steal human children and leave baby spriggans in their place. The route now passes the skateboard track of Crouch Hill Community Centre. There is a link here to Crouch Hill Station. Continue along the Parkland Walk, beside Blythwood Road, then past a grass-covered reservoir on the left at Mount Pleasant. The next bridge crosses Stapleton Hall Road. At the end of the Parkland Walk, turn left across the main East Coast railway line from London to Scotland. The link to Finsbury Park Station leads off to the right and ahead lies Finsbury Park. Cross the park's carriage drive. On the left is a café, with toilets and a picnic area. Follow the path ahead past a play area: 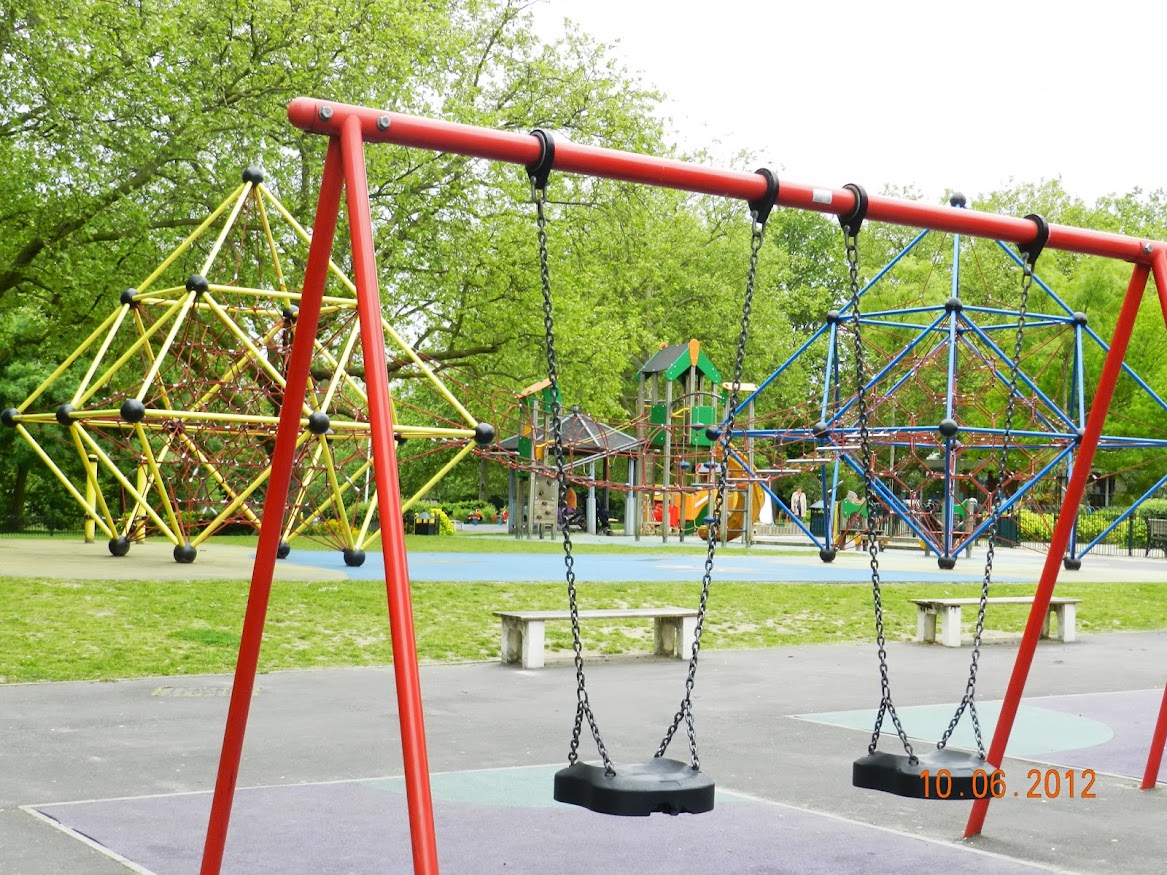 At the McKenzie Pavilion building turn left to enter a more formal garden. Keep ahead to the elegant wooden shelter with seats and the Capital Ring signpost. 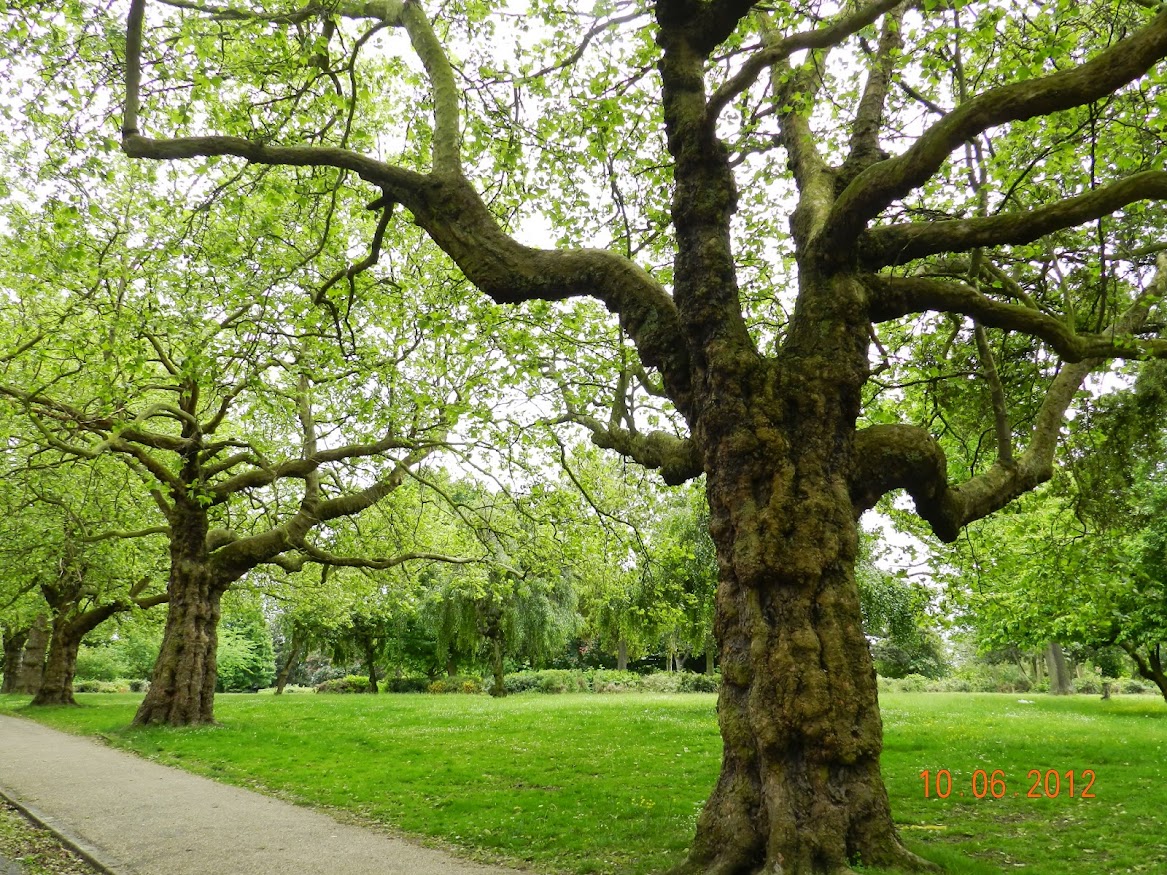 At this point there is a choice of routes to Clissold Park, either on the main route beside the New River, mostly on grass or earth with a short flight of steps, or more directly – saving 1 mile (1.6km) – on a level alternative route beside roads. For the alternative route, turn right at the signpost. Follow the path across the carriage drive again and go through the ceremonial gateway, with Manor House Station nearby. Turn right across Seven Sisters Road, then left across Green Lanes. Turn right to follow Green Lanes for 400 metres, rejoining the main route by passing The Castle. The main route continues ahead at the signpost. Shortly take the central path ahead and follow this across the carriage drive again. You leave the park on to Green Lanes, one of the longest roads in London at nearly seven miles. Originally Green Lanes, a former drover’s road, was made up of separate lanes that linked a series of villages, which is why the name is plural. Cross at the lights and turn left, then go through a bright green gateway on the right to join the New River Path; the surface is a bit uneven in places. The New River is spectacularly misnamed, as it is neither new nor a river — it’s nearly four hundred years old and an ingenious artificial watercourse: 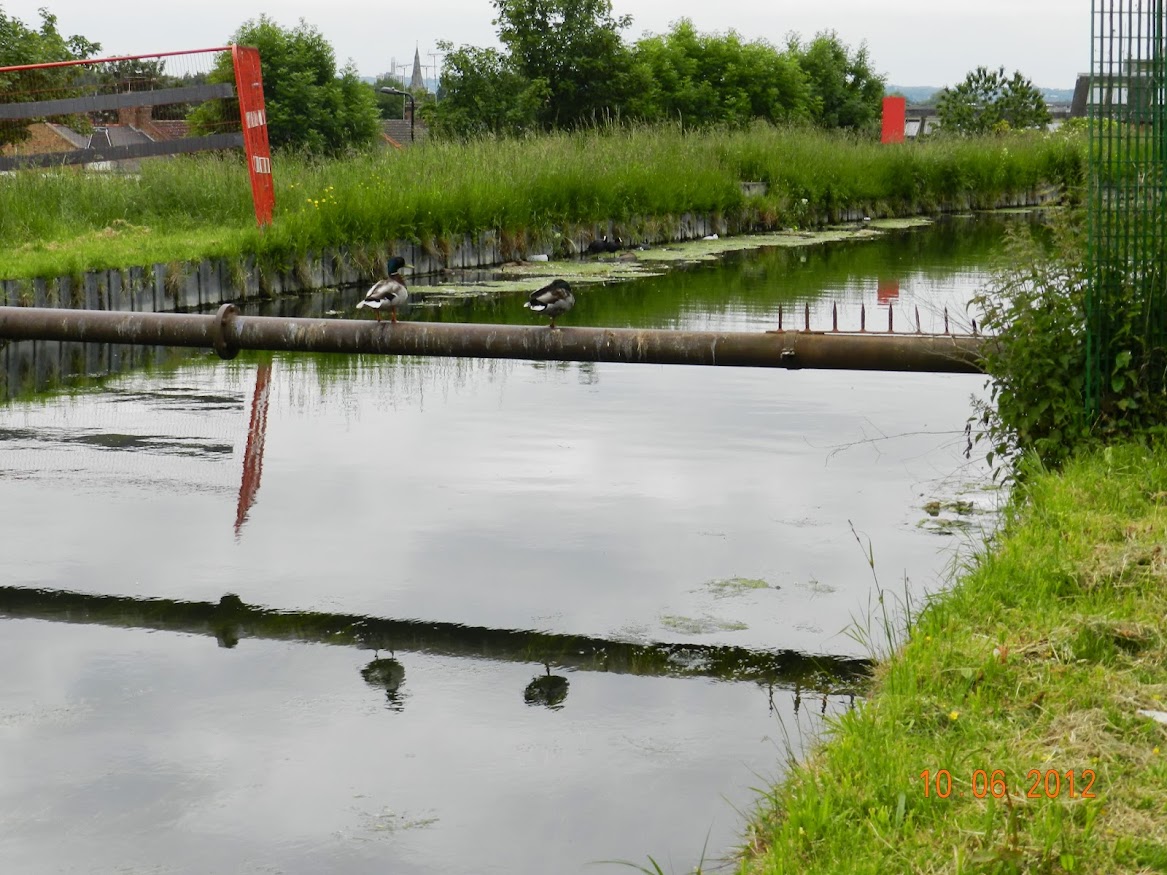 Built at a time when fresh water for London was in very short supply, it brought water 40 miles from springs in Hertfordshire to lslington. Following a very twisting route, the gradient dropped very gradually so that gravity pulled the water along; the canal dropped two inches every mile. There was considerable opposition from local landowners and it cost a fortune, but the entrepreneur and goldsmith, Sir Hugh Myddelton, pushed it through with support from King James I. Today the ‘river’ still supplies water to the capital. You can follow the river on foot for most of the way from Hertford to lslington. There is an industrial area to the left and on the right trees, birds and the residential buildings of the massive Woodberry Down Estate. With some 50 blocks this forms the largest council housing estate in Britain: 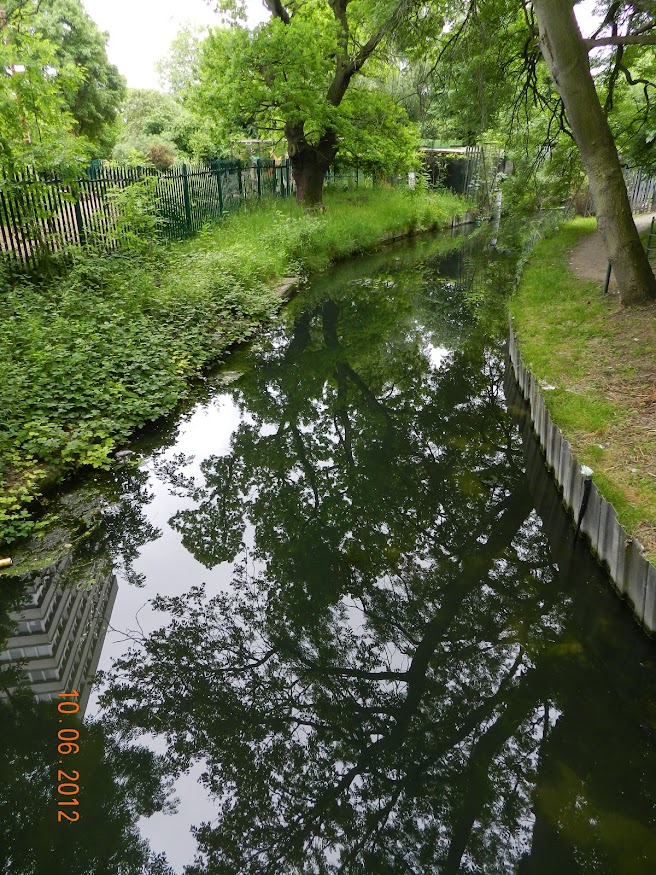 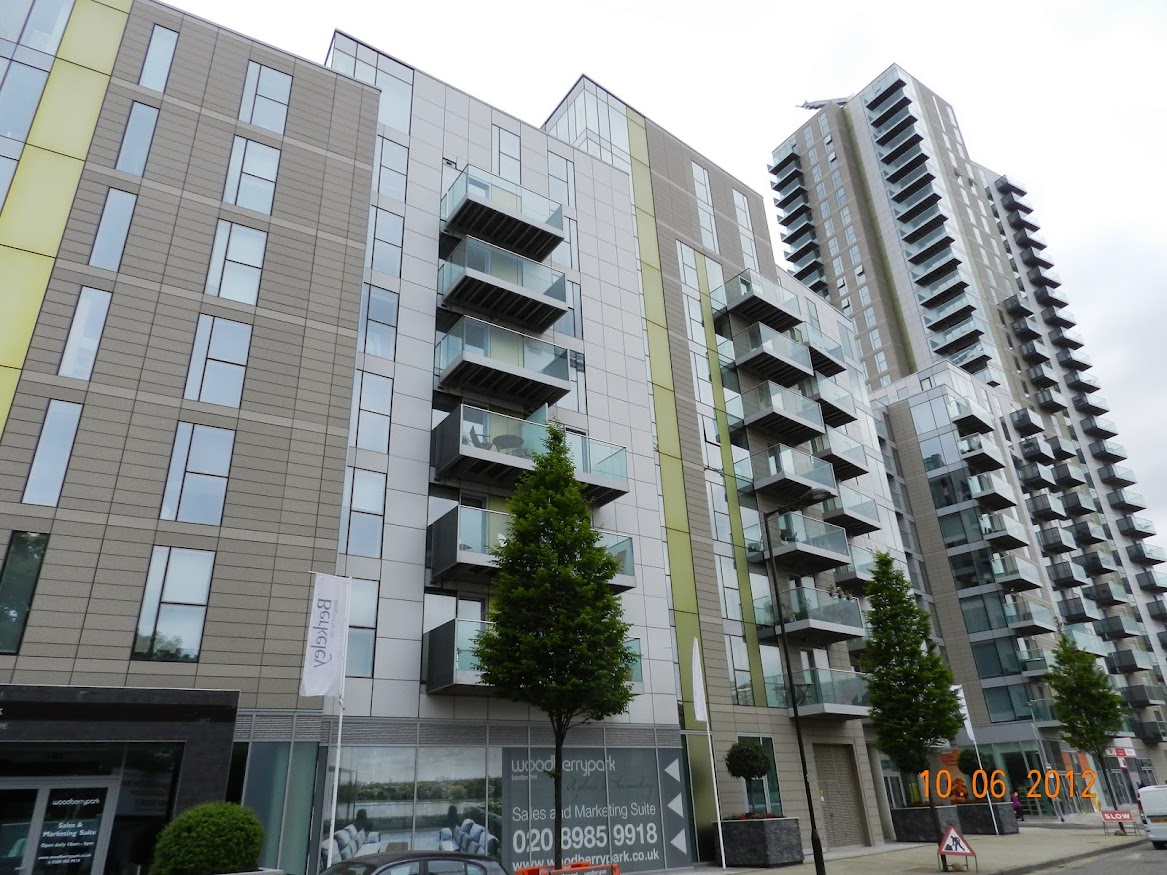 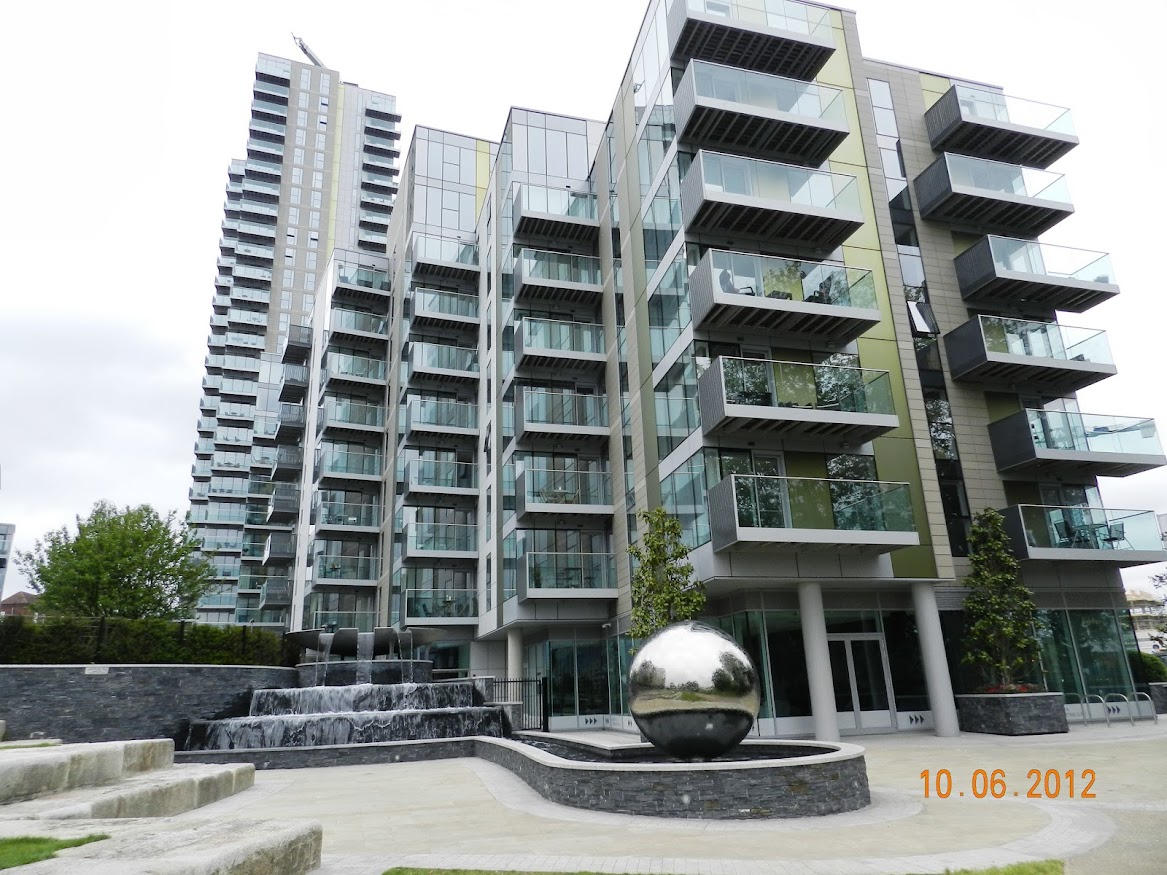 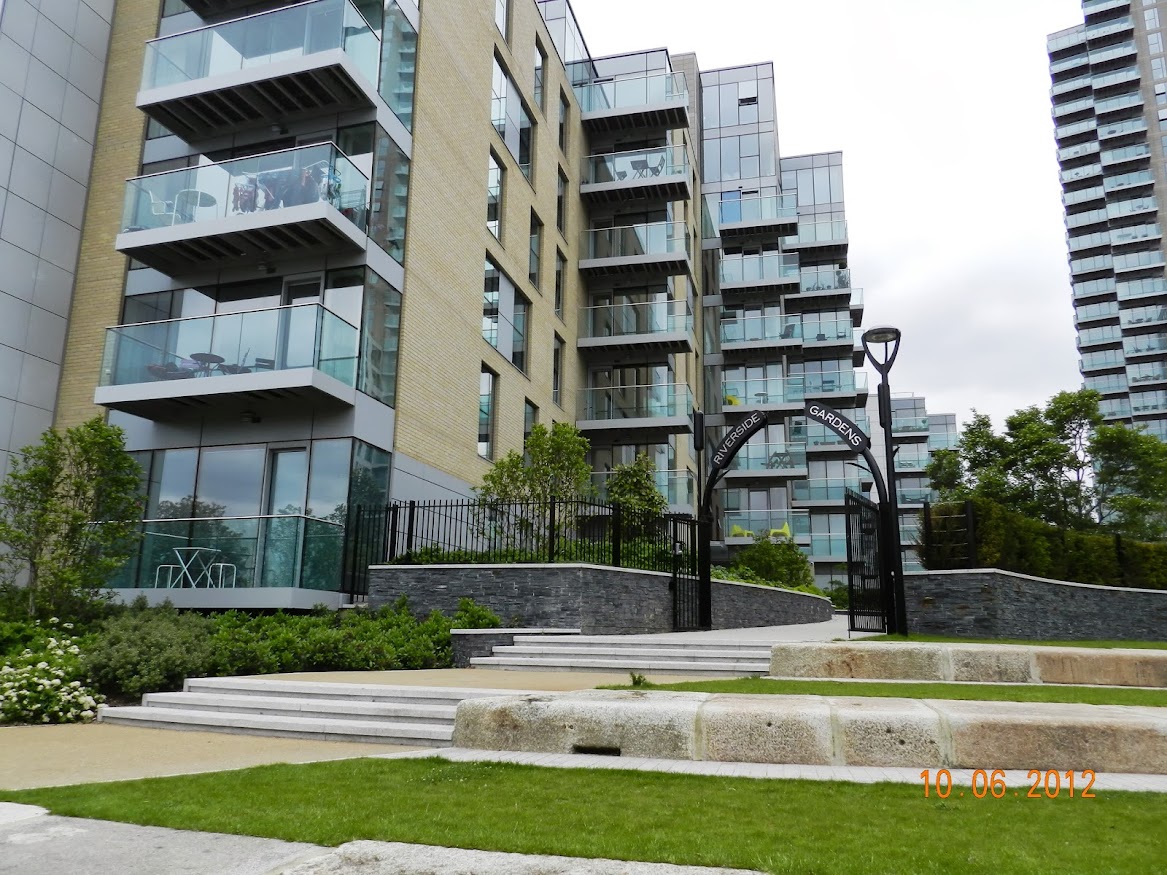 The route temporarily leaves the New River path to cross Seven Sisters Road, turn left to the controlled crossing, cross over, then go right to cross Amhurst Park road. Go to the right, parallel with Seven Sisters Road and watch out for the Capital Ring sign on the left. Go through a kissing gate and back onto the New River path. Walk alongside the river, passing a splendid large weeping willow tree dipping its branches into the water. 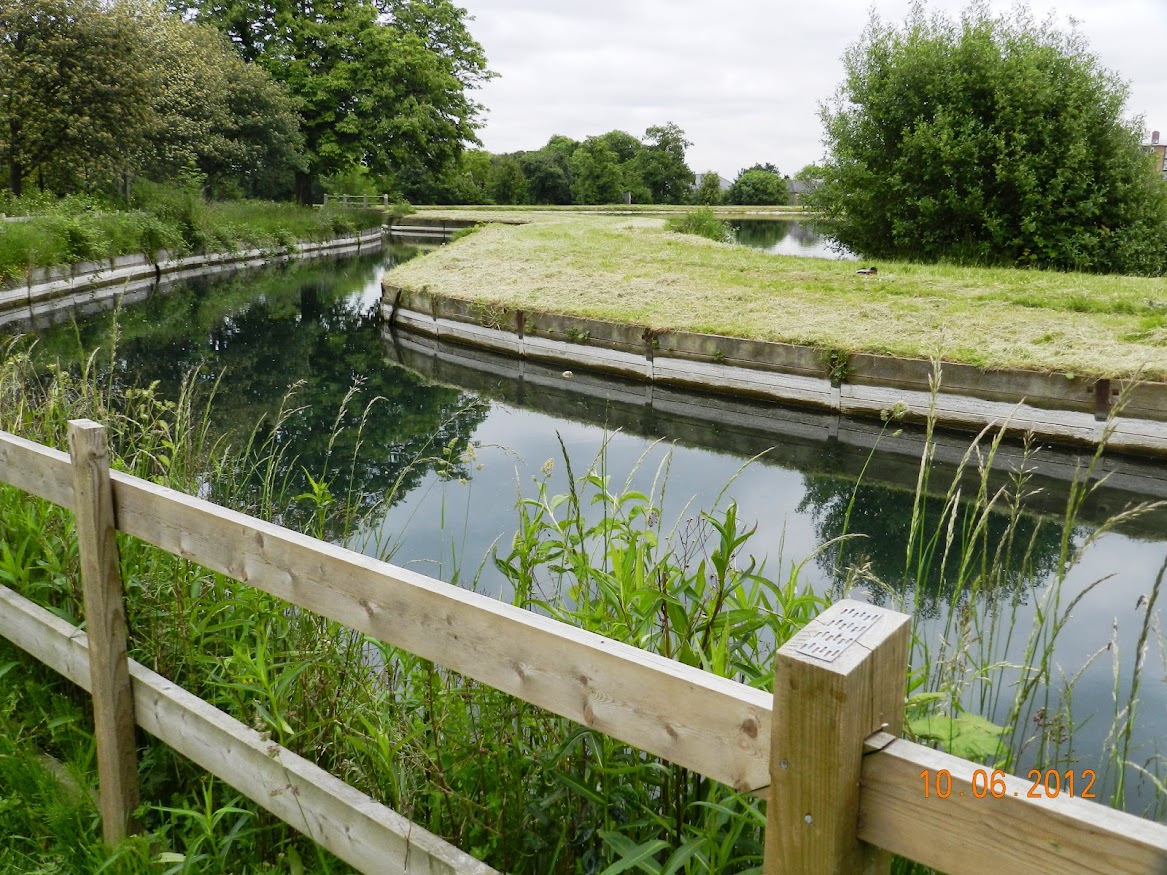 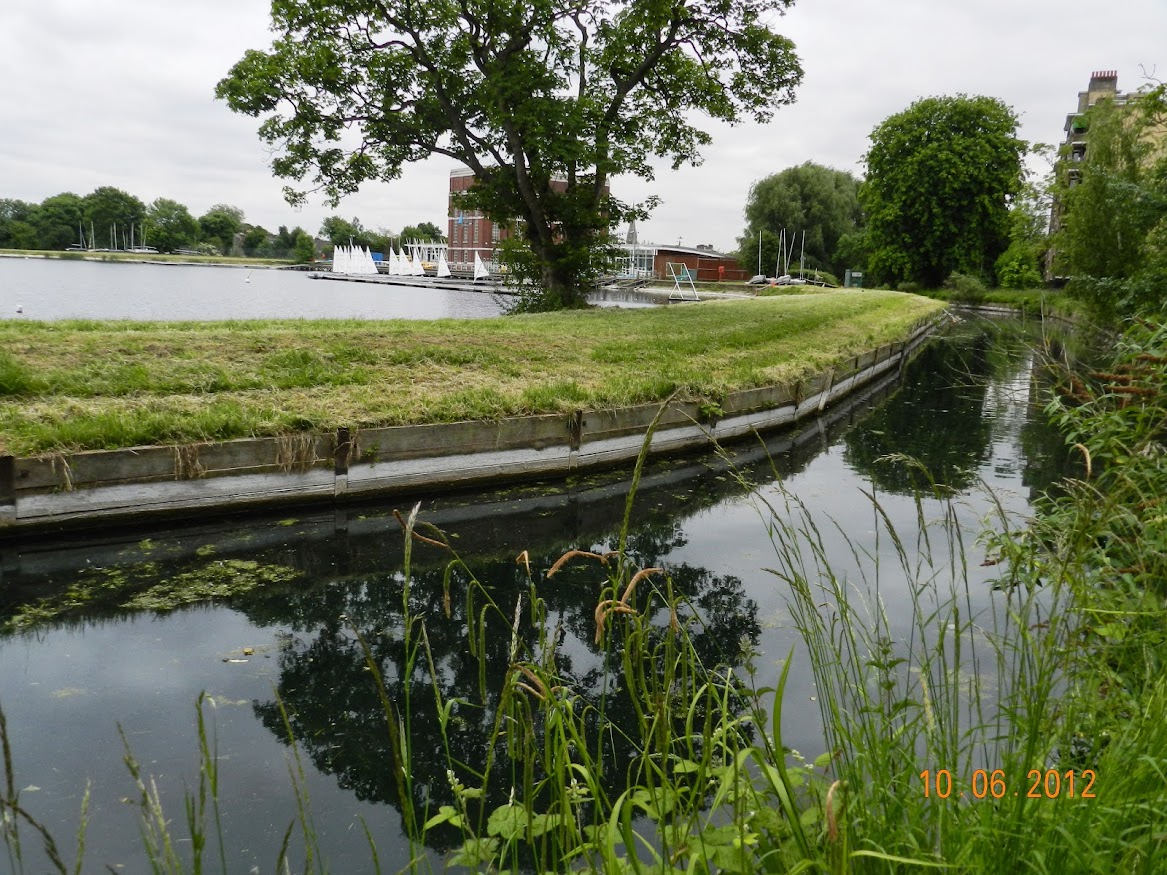 Go up some steps and follow it across a lane. Go down the slope and on past the East reservoir, on the left, where the flowing water of the New River comes to an end. Cross Lordship Road and continue ahead beside the West reservoir, which is now a nature reserve and water sports centre. At the end, cross a footbridge and turn right along a service road. To the left is the Reservoir Café, housed in the old filtration plant. On your left is The Castle, a fine example of the imaginative recycling of a utilitarian building. The former water pumping station’s brick walls and turrets now provide a large indoor climbing centre: 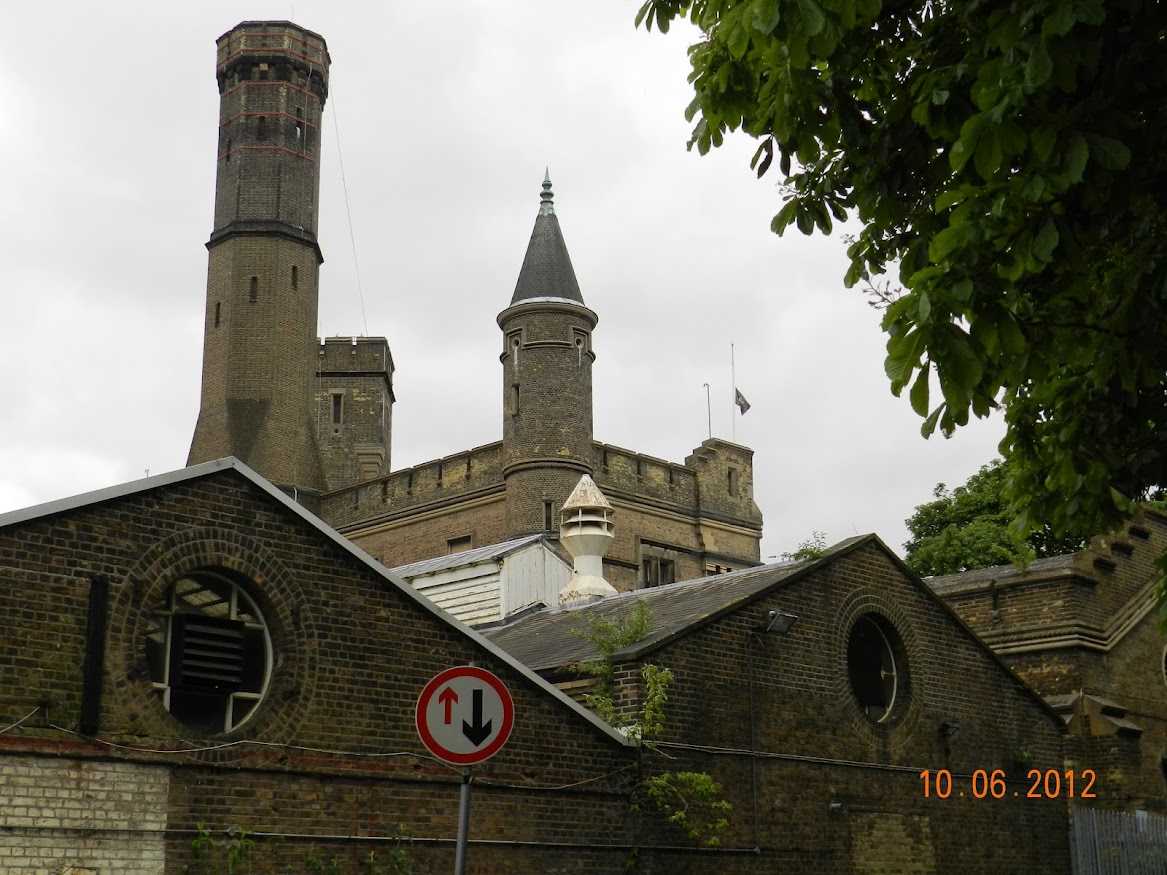 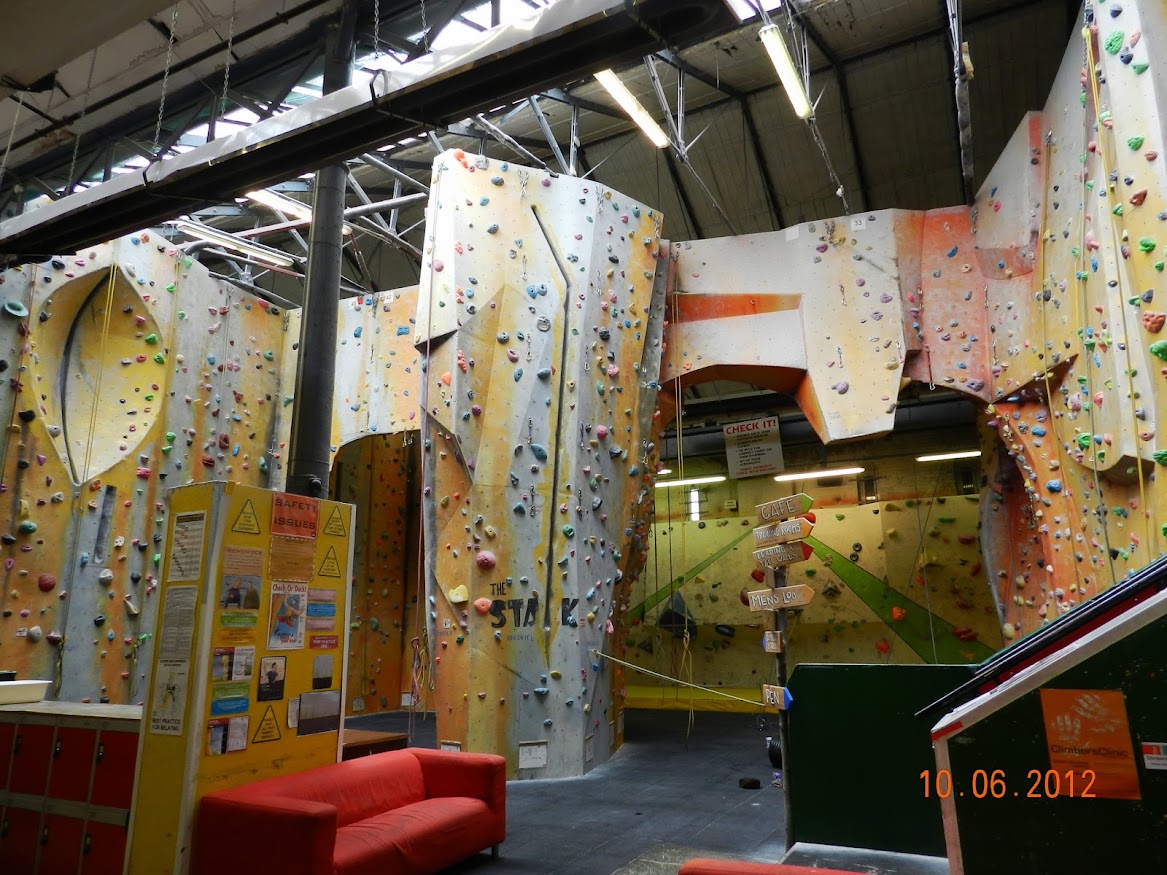 At the main road – Green Lanes, where the alternative route from Finsbury Park rejoins – follow the signs to Clissold Park. Once in the park bear half left to follow the right hand side of Beckmere and Runtzmere, the two small lakes that add to the attractiveness of Clissold Park; they are named after Joseph Beck and John Runtz, two campaigners who persuaded the Metropolitan Board of Works to buy the land and create a public park: 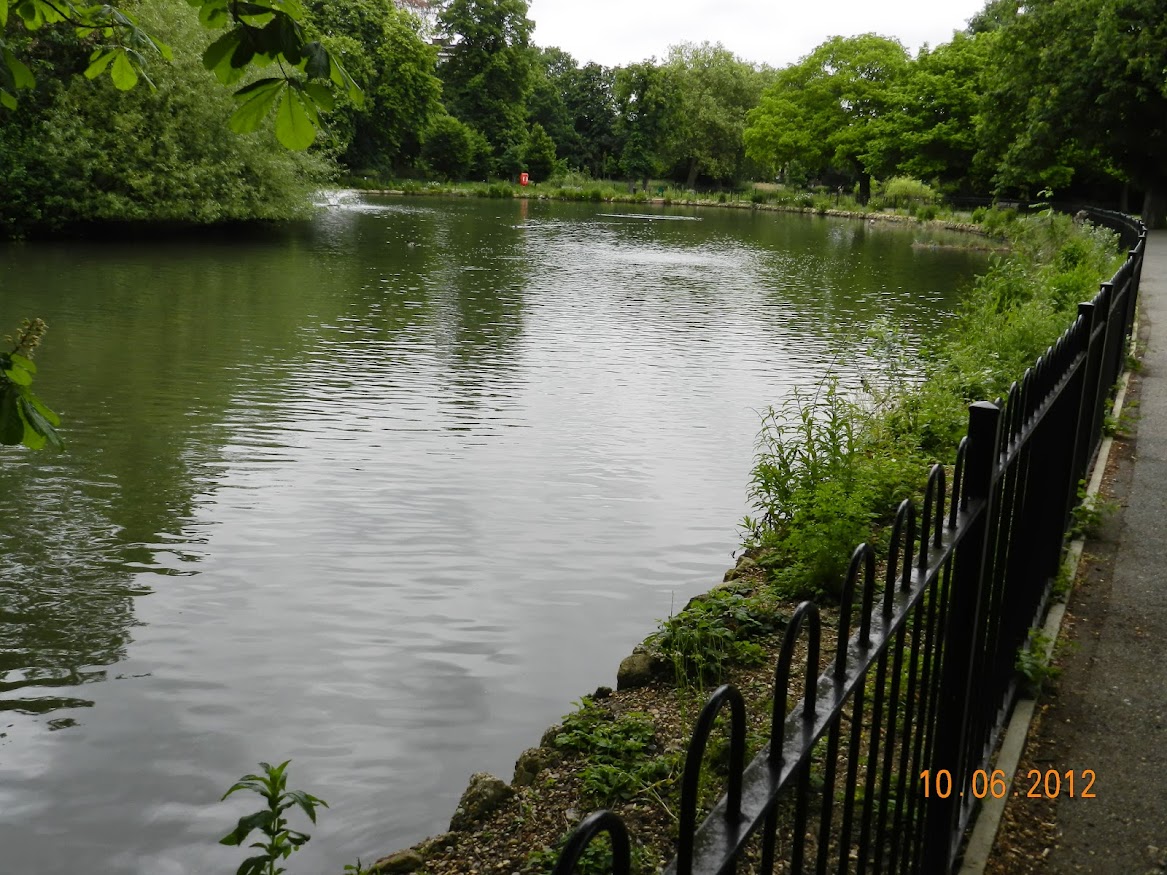 Just before the second lake turn right towards Clissold House, built in the 1790s for Jonathan Hoare, a local Quaker. In front of the house is a short stretch of water which was once part of the New River that you have just followed. An interesting inscription on a drinking fountain behind the house commemorates the three daughters of Wilson Yeates, Esq., apparently aged 134 years. A closer look reveals that the sisters sadly died at the ages of one, three and four. The monument was erected by their sister, Rose Mary Crawshay. Bear half left, between the mansion and a children’s playground and follow the signs to Stoke Newington Church Street. Pass the oldest church – known as The Old Church of St Mary’s – and go along a path through the graveyard: 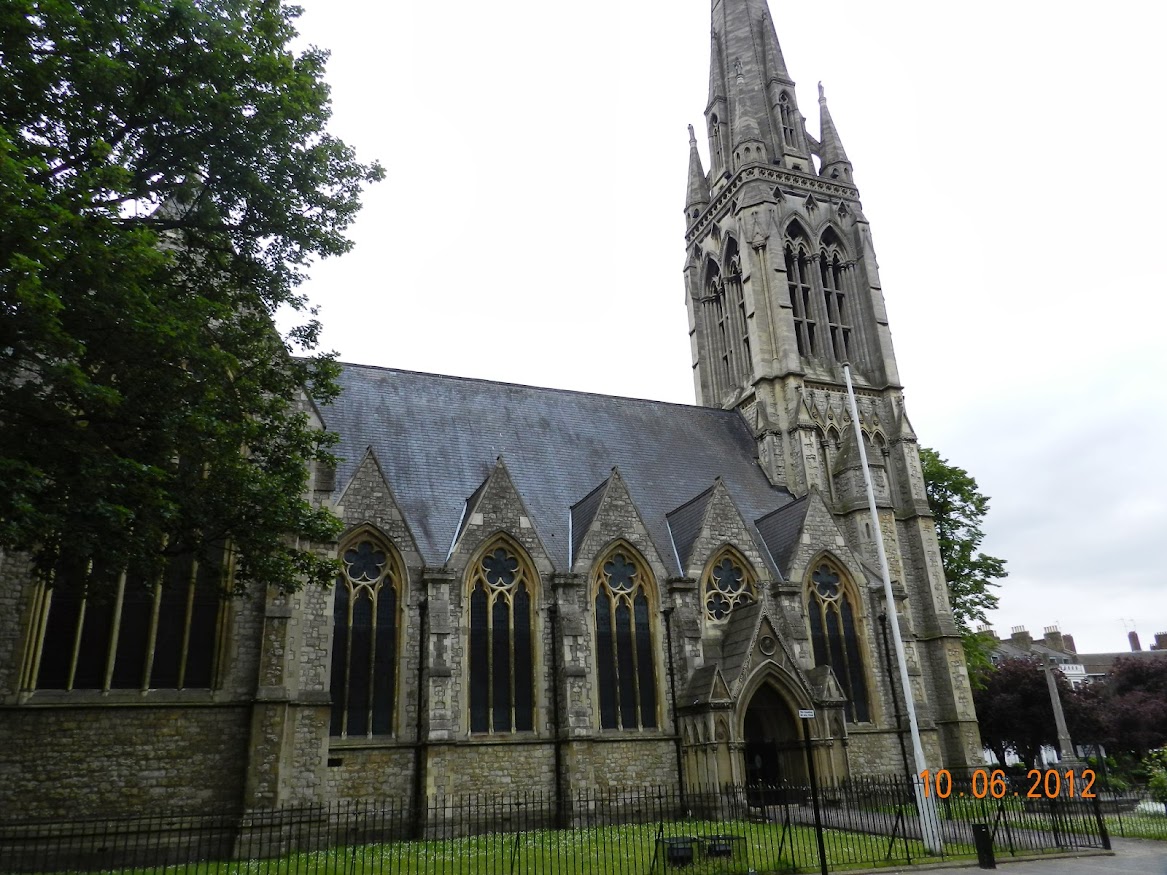 The church was built in 1563 and enlarged in 1829 by Sir Charles Barry, architect of the Houses of Parliament. It was bombed in 1940 and restored soon after. Opposite is the ‘new’ Church of St. Mary's which was built in the 1850s in response to the rapid growth of the population. The Rector, the Reverend Thomas Jackson, offered the site of the old rectory and garden for a new church to be built opposite the 300 year-old Old Church. Stoke Newington attracted non-conformist Christians of all kinds; one of these was Daniel Defoe, the author of Robinson Crusoe and Moll Flanders, who is commemorated by a local street and pub. Continue left along Church Street, passing the old Stoke Newington Town Hall, now a branch office of Hackney; it’s built on the site of Stoke Newington Manor House, 1500-1695. The route now passes through Abney Park Cemetery. To avoid the steps that lead into the cemetery continue along Stoke Newington Church Street and then turn left along Stoke Newington High Street to rejoin the route at the cemetery gate. with reception buildings, chapel and landscaping – to take a non-denominational approach with no separation between the graves of different religions; consequently there was no consecration of any part, except where individuals chose it for their plot. It’s now a very evocative site and nature reserve where over 300,000 graves have been laid since it opened in 1840; many notable people are buried here. Every path has a name and you will follow Abney House Corner, Lions’ Ride, Wilson Ride, Chapel Ride and Swayne Path. Inside the gate, take the left hand of two narrow paths leading between graves to join a wider path, where you turn left. Opposite lies the grave of William Booth, who founded the Salvation Army in 1865: 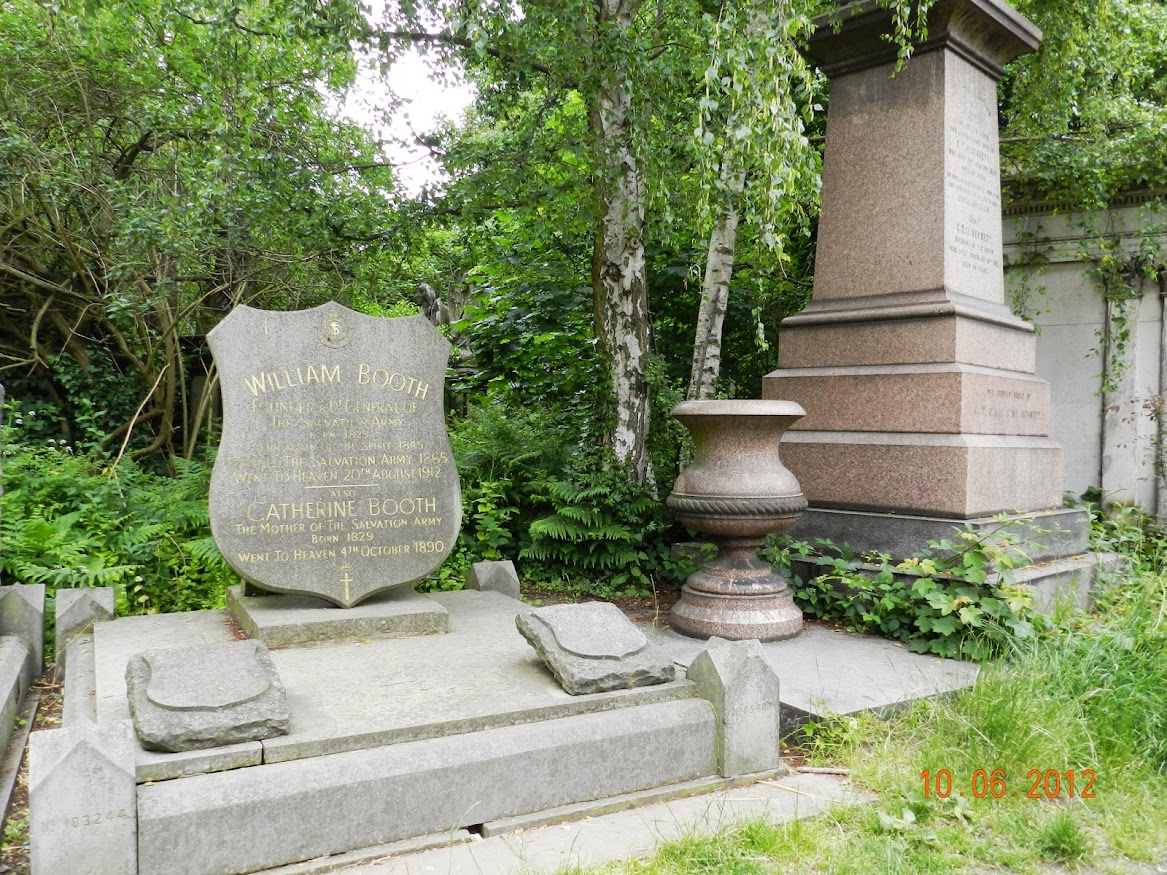 In 200m, at a major path intersection, turn right to pass the chapel. From the chapel, continue in the same direction past another path intersection until you come to a broad, paved avenue by a sundial; follow it to the main gate. The visitor centre contains a display about the cemetery’s history. Beneath your feet lies a plaque containing Egyptian hieroglyphics, translated as ‘The great gate of the mortal part of man’. Beyond the gate, turn left along Stamford Hill and shortly after cross over at the traffic lights to reach the junction with Cazenove Road, the end of Section 12. For Stoke Newington Station turn left for 120 metres. 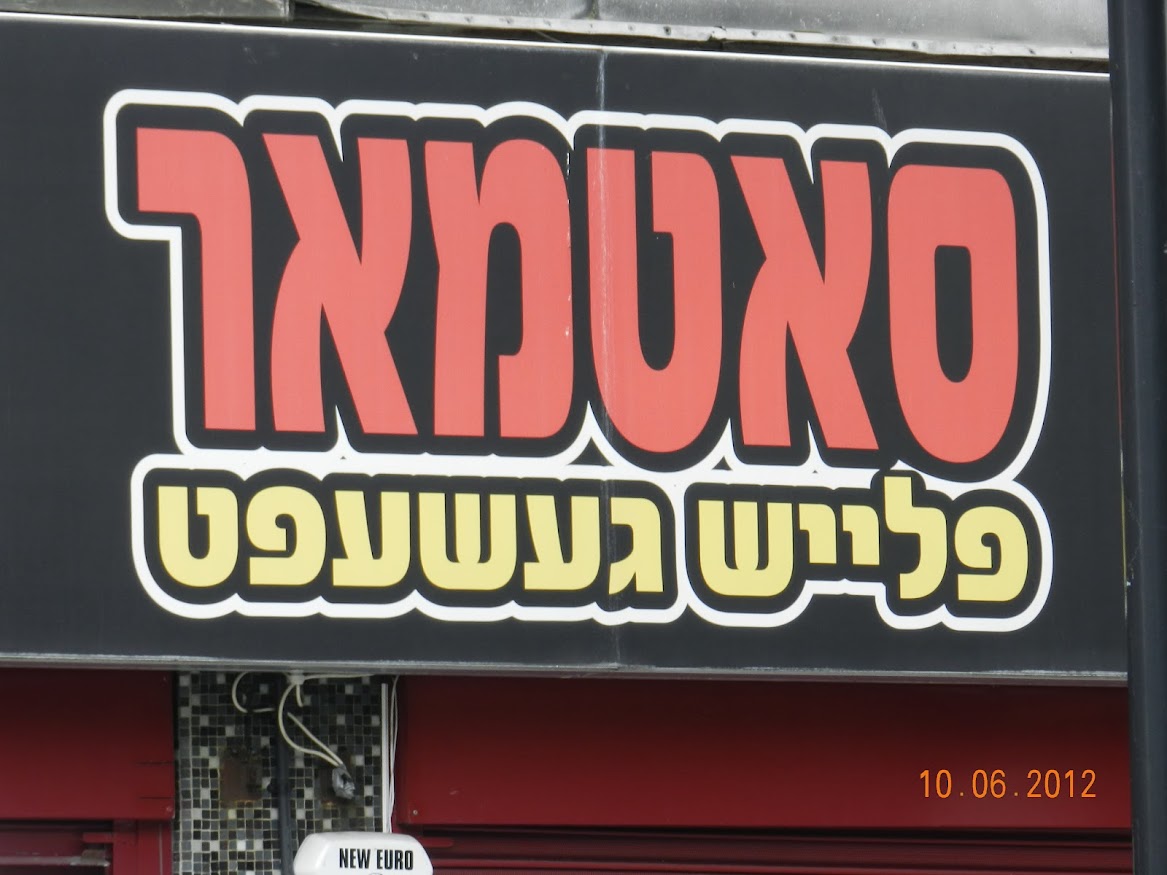 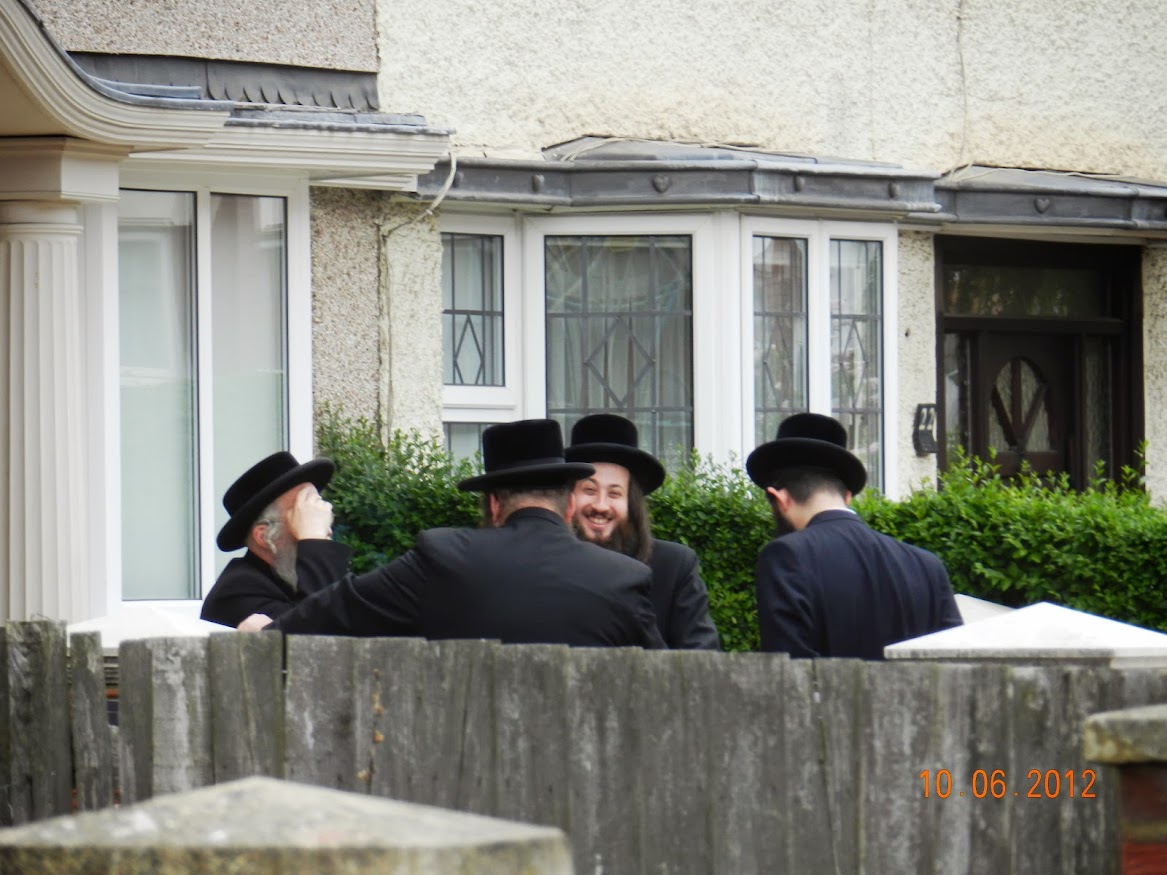 On the seveth road to the right - turn right to the Ravensdale Road to stroll along an elegant road with nice-looking mansions and houses - mostly populated by the Jewish community: 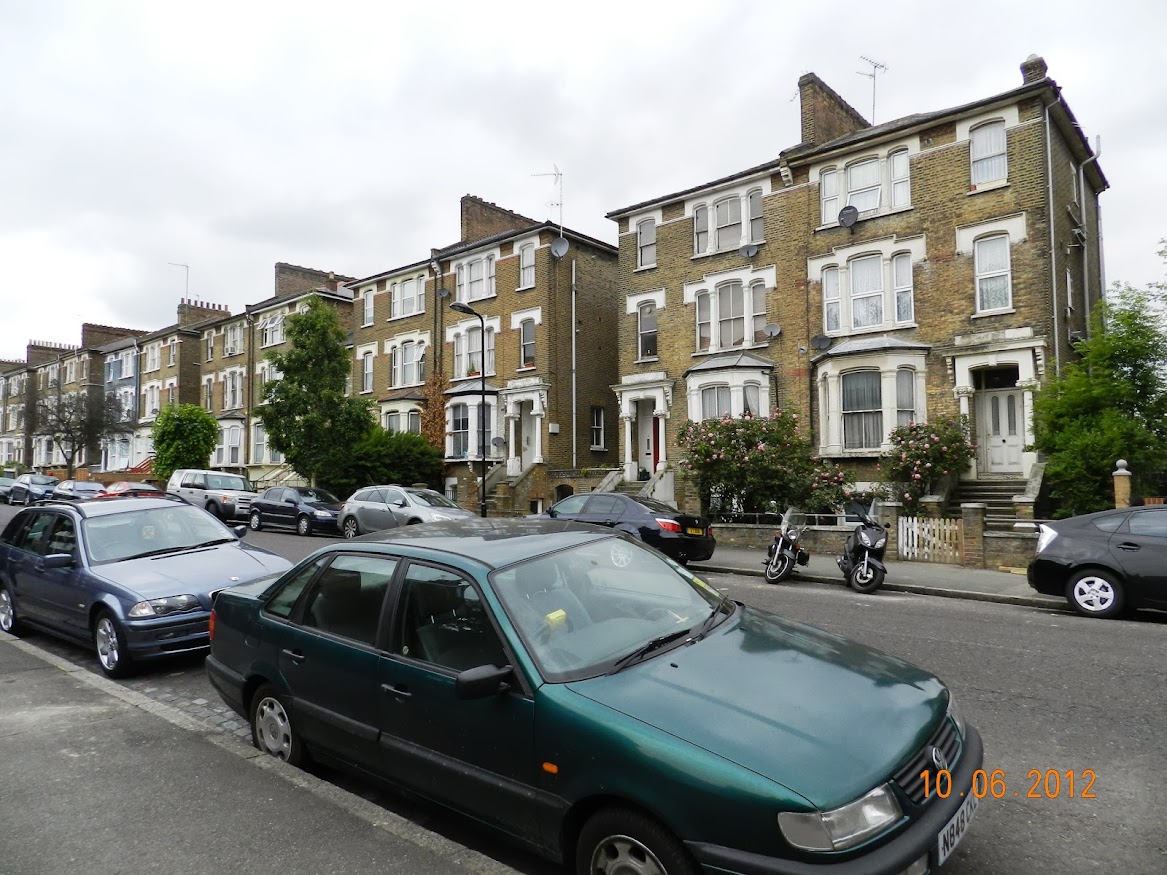 In the second right road - turn right to Leabourne Road: 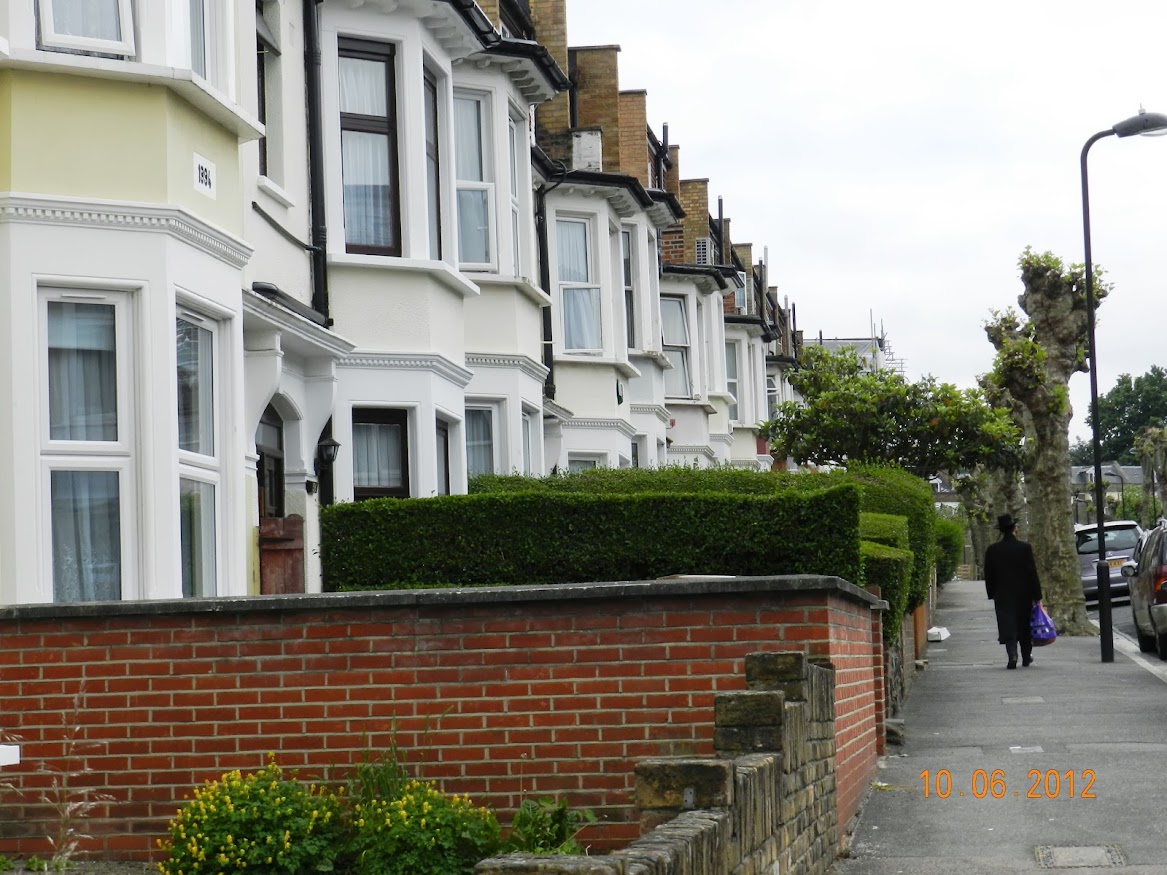