Practical note: in case you stay in Nice at least 4 days - buy a 7-day pass giving access to most Nice museums for €20. Great value ! Price: 10 euro fee entrance. If you have a museum pass it is worth calling in.

Another note: the museum entrance is quite tricky to locate. You have to go up ABOVE the street level  before you can enter. NO disabled access to this modern building ! Give the museum a chance in a rainy day. No cafe' or restaurant.

History: The Modern and Contemporary Art Museum of Nice was inaugurated on the 21 June, 1990. The first attempt to create a contemporary art museum in Nice was initiated in the second part of the 20th century:  proposing the restructuring of the Ponchettes' Gallery by Henri Matisse and Pierre Bonnard. That was the "first bird"  of  the Modern Art Museum of Nice. The second reincarnation was the construction of a modern wing in the Massena's Museum garden. The project was abandoned and a parking place was constructed instead. The vision was renewed in the middle of the 70's when Claude Fournet had been promoted as director of the Department of the Museums of Nice. Both of the establishments breath and kick in Nice. The Contemporary Art Gallery as well as the Ponchettes' Gallery are both popular showcases of modern art in Nice. In 1985, an accord was signed with the French state planning an exceptional five-year program of acquisitions of art works. The financial help of the state given at the beginning of these ambitious acquisitions will determine the future institution to be called "the museum controlled by the state". In 1987 was signed an agreement between the town of Nice and the state for switching to municipal financing of the architectural project of modern art museum buildup. It took only three years between the decision and the inauguration of the museum. The architects Yves Bayard and Henri Vidal proposed a very original arch with one part on a Paillon side and the other on the axe of the old National 7, between the harbor and the old city with districts developed during the 19th and 20th centuries. The architecture of the museum had to satisfy two components of Nice's characteristic ingredients : the unique urban planning and the exotic, romantic air of the "Belle Epoque".

Overview: The building that hosts the Musée d'Art Moderne et d'Art Contemporain (MAMAC), one of Nice’s architectural treasures, was designed by Yves Bayard and Henri Vidal. There is a total area of 4000 m2 on three levels with nine halls for exhibitions. The exhibition spaces are distributed on three levels and an extra one with terraces for public access. The first floor houses the temporary exhibitions, the second and the third one are reserved for the collections. On exterior of the complex has no windows, but all the halls are connected with glass-made footbridges. The round towers connected by the transparent, in between walkways provide interesting spaces for display.

The upper floor is actually open terraces which are used as panorama open spaces from where people can have a wonderful views of the town. In one of these, is presented "Le Mur de Feu"  of Yves Klein.The front entrance and the shop of the museum are at the same level with the esplanade, the auditorium and the gallery of the museum. There are esplanades connecting the museum to the municipal theatre on one side and on the other - to the Palais des Congres. The two esplanades offer the possibility of exhibiting monumental sculptures by: Alexander Calder, Mark Di Suvero, Barry Flanagan, Bernar Venet, Keith Haring, Sandro Chia and Niki de Saint Phalle.

Our opinion: intriguing exhibition - but, nothing breathtaking. There was not one item we had admired. The building itself is a piece of art and the roof is fantastic. Worth a visit if you enjoy modern art. Go for the roof, architecture and the museum's surroundings. Anything else is a bonus...

Keith Sonnier - Elysian Plain Series. Keith Sonnier was part of a group of artists who challenged preconceived notions of sculpture in the late 1960s by experimenting with materials as varied as latex, satin, bamboo, found objects, satellite transmitters, and video. In 1968, the artist began working with neon:

Yves Klein - Blue. Monochrome abstraction—the use of one color over an entire canvas—has been a strategy adopted by many painters wishing to challenge expectations of what an image can and should represent. Klein likened monochrome painting to an "open window to freedom." He worked with a chemist to develop his own particular brand of blue. Made from pure color pigment and a binding medium, it is called International Klein Blue. Klein adopted this hue as a means of evoking the immateriality and boundlessness of his own particular utopian vision of the world. Klein's pictures with the blue color are amazing and which photos don't do justice to and have to be seen to be believed:

Views from the MAMAC windows over Cimiez roofs:

View of Place Garibaldi and the surrounding hills from the rooftop terrace of MAMAC:

THE ROOF TERRACES ARE STUNNING !!! ONE OF THE HIGHLIGHTS OF NICE. The view from the museum roof  gives you a good sense of Nice's topography and size. Amazing on a sunny day, less so on a cloudy one. You arrive to the roof by climbing up the stairs designed by David Tremlett:

View of the Acropolis from the MAMAC roof:

View of the Jardin Maréchal Juin and the Cube. See Stelios Pamphilos' blog: Nice - From the Promenade du Paillon to the Castle Hill (Le Chateau):

View of the Jardin Maréchal Juin, the Cube and the Acropolis: 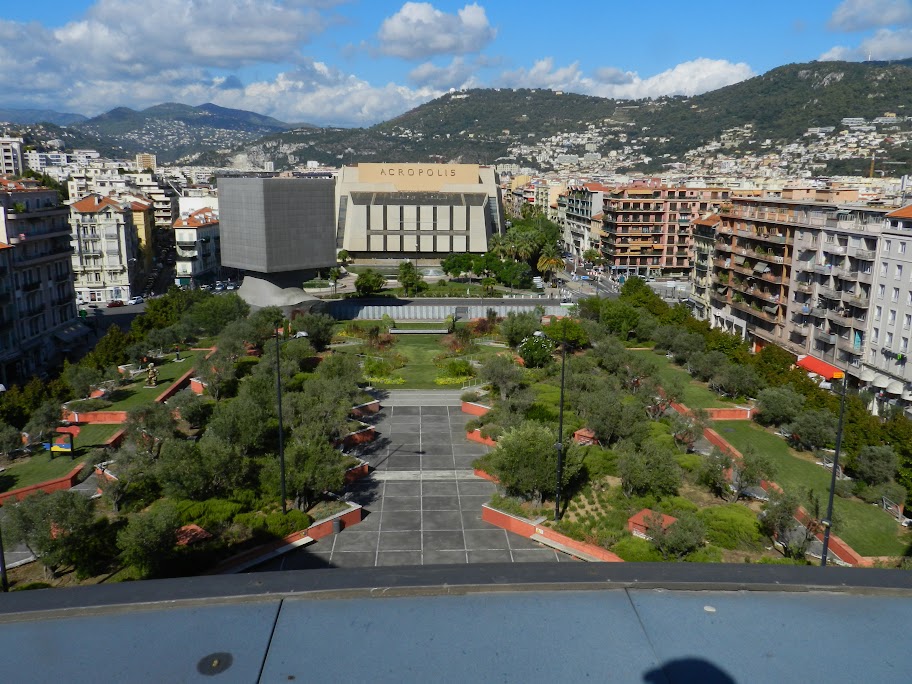 View of past Hotel Regina: