Half-day on the Griboyedov Canal Bridges: From the Palace Square we walk approx. 400 m. to our first destination - the Singers' Bridge. Head east on the Palace Square (пл. Дворцовая) toward the Moika (Moyka) river, 250 m. Turn right onto Pevchesky Bridge (пр. Певческий) and cross the Moyka river over the bridge, 150 m. We are in the Moyka reki Embankment (naberezhnaya Reki Moyki). The Pevchesky Bridge (Пе́вческий мост) or Singers' Bridge), is also known as the Choristers' Bridge or Yellow Bridge (Жёлтый Мост, Zholtyi Most). The bridge got the name Yellow from the color of the railings, and according to the tradition of color-coding the bridges crossing the Moika River (that already had the Blue Bridge, the Green Bridge and the Red Bridge). The bridge i, actually, a part of the Palace Square. It is the third-widest bridge in Saint Petersburg, after the Blue Bridge and Kazansky Bridge. The length of the bridge is 21 metres, and the width is 72 metres.  The first wooden bridge on the site was designed by the French architect Auguste de Montferrand (St. Issac Cathedral designer). It was inaugurated in 1834. The first pedestrians to cross the bridge were the troops marching to the parade celebrating the unveiling of the Alexander Column (also designed by Montferrand): 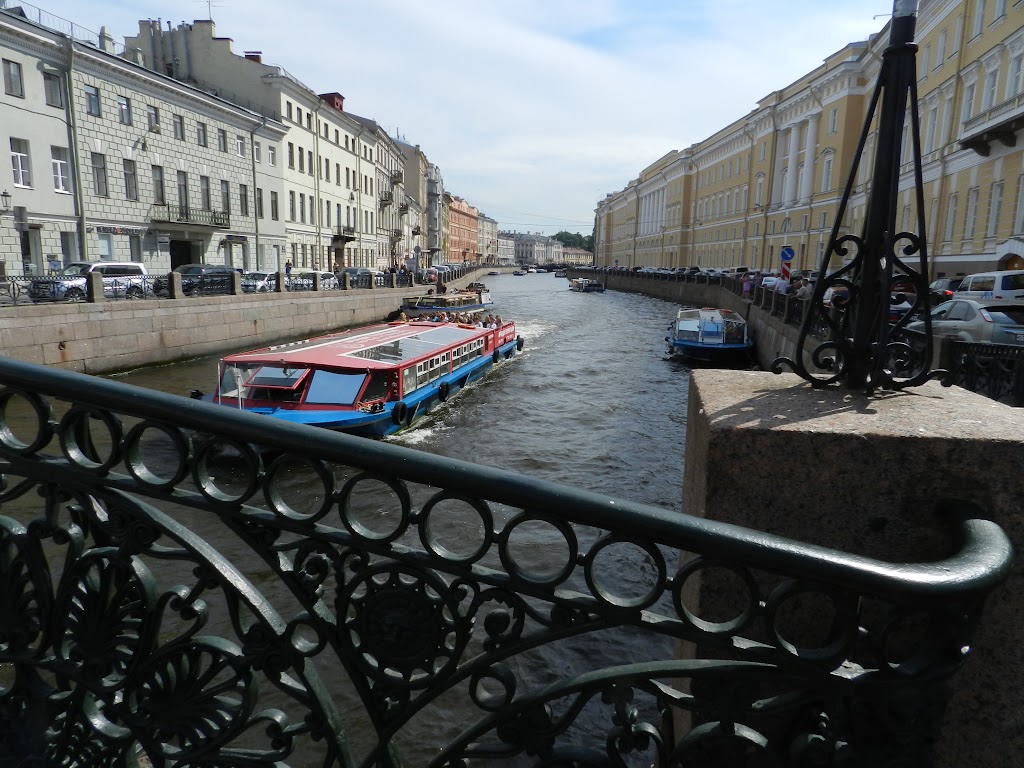 We continue northward along the Moyka river and the Pushka Inn hotel is on our right (east) - 130 north-east from the Singers' bridge. Continuing north-east, 350-370 m. further we face a couple of bridges - similar to each other. 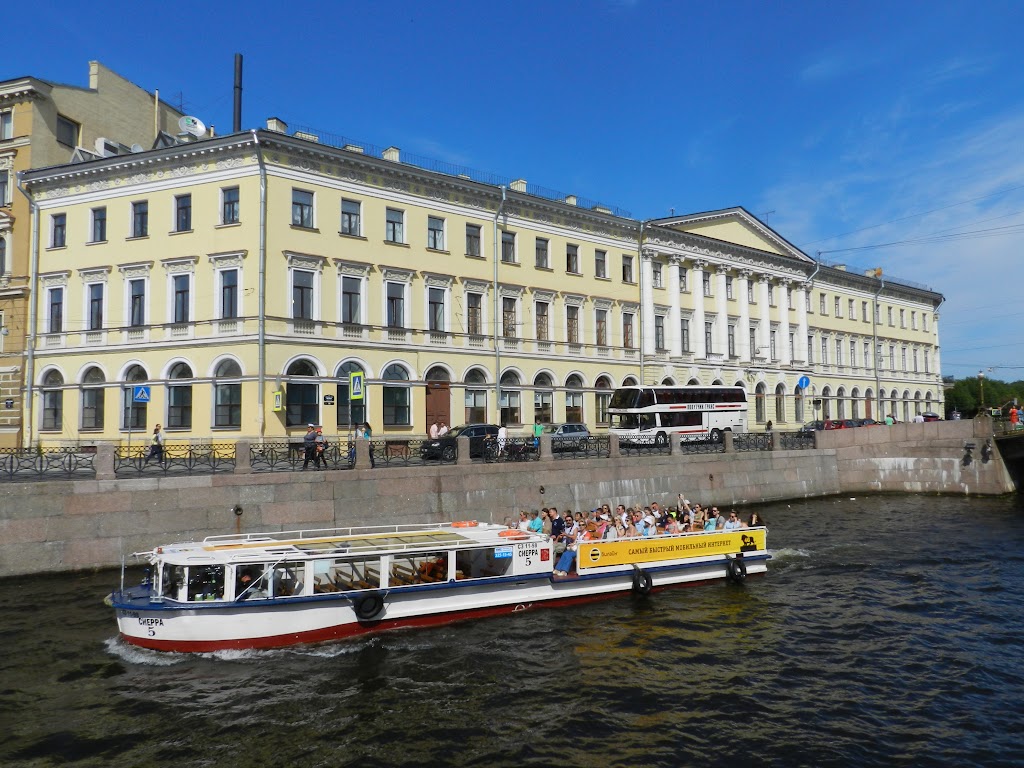 The more northern / western bridge is the Small Stables Bridge or Tripartite Bridge or Three-Arched Bridg (Malo Konyushenny most) and the next is the  Big Stables Bridge (Bolshoy Konyushenny most) or the Teatralny Bridge (see below) - both over the Moyka River. They are similar in design and decoration and situated perpendicularly to each other in front of the Church of the Savior on Blood. The bridges were first constructed in wood during the reign of Empress Anne. A century later, architect Carlo Rossi conceived to unify the structures facing the Michael Palace into a uniform Neoclassical ensemble. His plans were realized between 1829 and 1831 when the bridges were rebuilt and decorated with identical lamp posts and ironwork fences featuring palmettes, spears, and gorgons. Thanks to repairs undertaken in 1936, 1953 and 1999, the bridges remain in good condition, and are still open to road and foot traffic. The Tripartite Bridge (Malo-Konyushenny most, 1829–31, was designed by George Adam and Wilhelm von Traitteur): 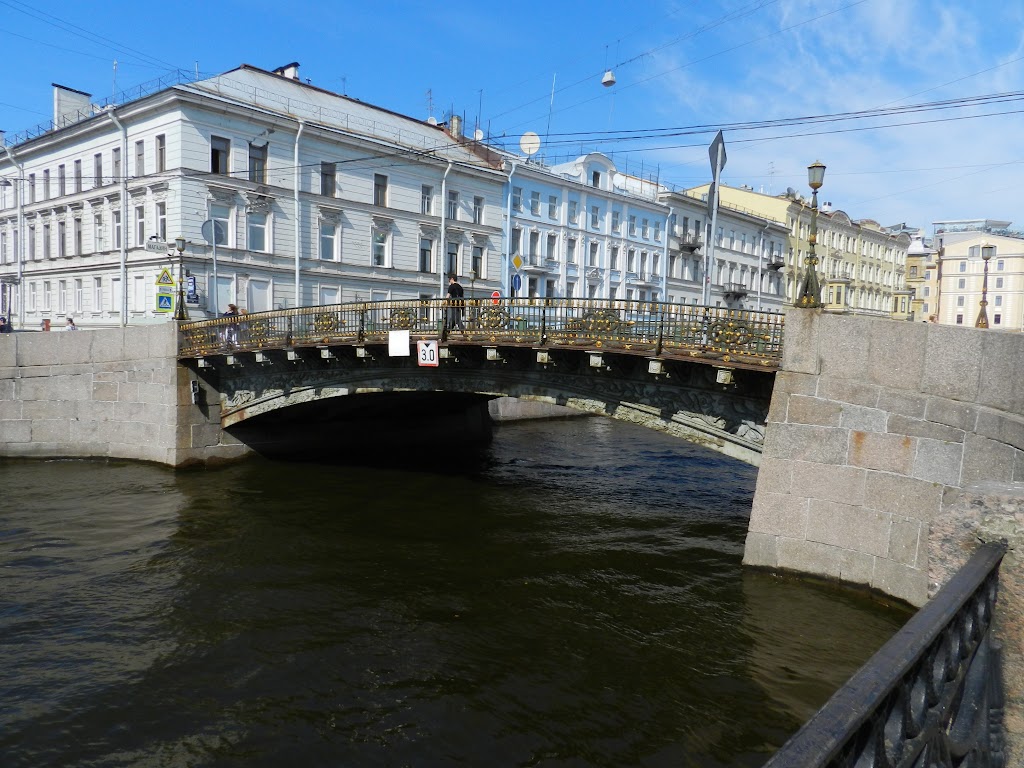 we find the Imperial Stables building - in the end of the Small Stables Bridge (Maloy Konyushenny most). Years of construction: 1817-1823
Architects: VP Stasov. The building resides among the Konyushennaya square, Konyushenny lane, Moika river and Griboyedov Canal. It is because of the existence of these stables courts - were named Konyushenny lane, Konyushennaya square, Bolshaya and Malaya Konyushennaya bridges. In 1816, VP Stasov was appointed chief builder of the stables and he drafted their restructuring. The work was conducted from 1817 to 1823 using the old walls. Following the restructuring was the main southern facade. The ground floor houses the studios, and secondly - Apartment officials. After completion of all construction work in 1823 building facades were painted light gray with white details. In 1917 the building of the stables accommodated the 4th Company of the Pavlovsky regiment, which is February 26 this year, led the fight with the police on the embankment of the Catherine Canal in the Konyushennaya square. Here is the State Automobile Inspection of Dzerzhinsky district. Currently the premises occupied by police control of St. Petersburg and Leningrad region. Church of the Saviour Not Made by Human Hand is built as the upper tier of this complex.It is an integral part of the architectural ensemble that once made up the Imperial Stables. The first wooden church was built on this site in 1737, while the current building was designed by Vasiliy Stasov and erected in 1817-1823. Significantly expanded and altered forty years later by the serf architect Pyotr Sadovnikov, the church retained its neo-classical grandeur, with soaring Doric columns and deep porticos beneath bas-reliefs depicting Christ's entry into Jerusalem and the bearing of the cross: 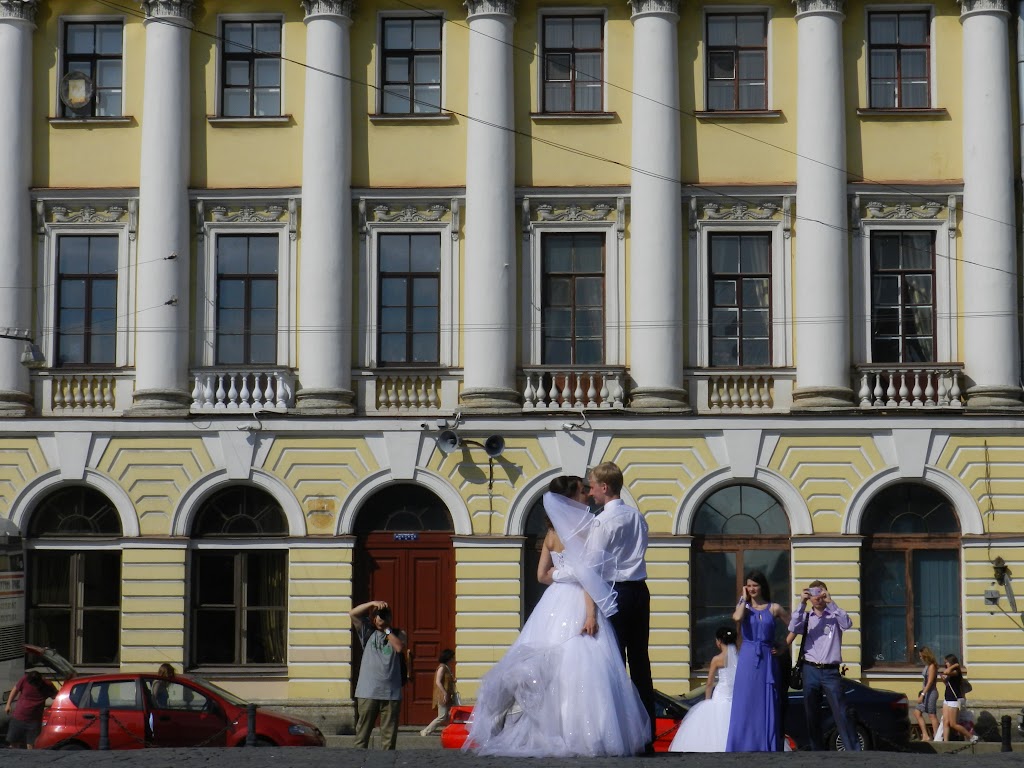 Stick on walking on the southern bank of the Moyka (Moika) river. Walk approx. 400 m. further eastward along the Moyka - until you hit its intersection with the Griboyedov Canal. Here, you meet the Teatralny Bridge. This is a group of very decorative connected bridges that cross the point where the Griboedov Canal flows out of the Moika River east to Konyushennaya Ploshchad and west to the Church on the Spilled Blood. Teatralny Bridge(s) take(s) its (their) name from the Free Russian Theatre, which stood nearby at the end of the 18th century. The Teatralny Bridge (Bolshoya Konyushenny most, 1829–31, was designed by George Adam and Wilhelm von Traitteur:

Along Griboyedov Canal - north of The Church of Our Savior on Spilled Blood: 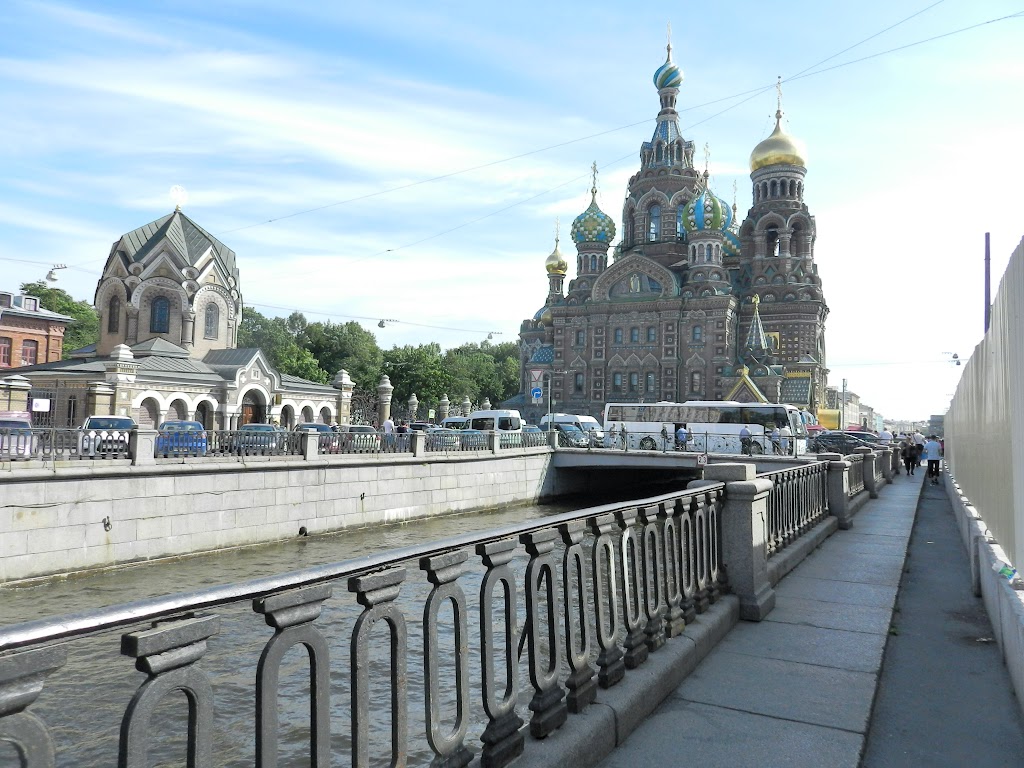 Along Griboyedov Canal - east of The Church of Our Savior on Spilled Blood: 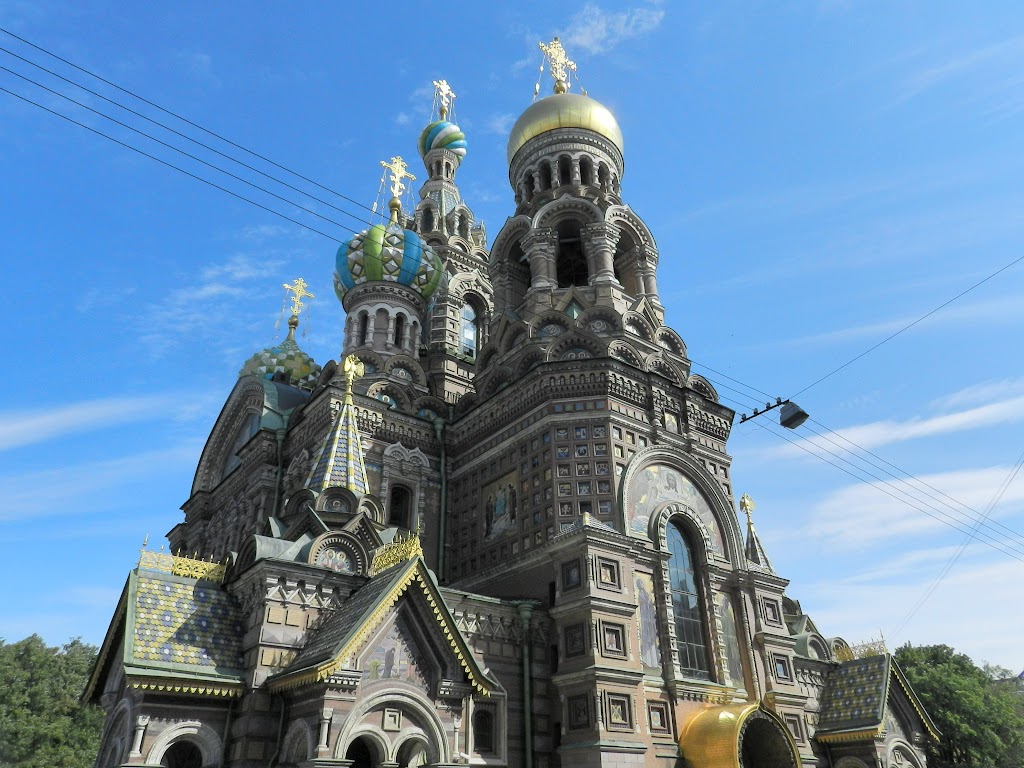 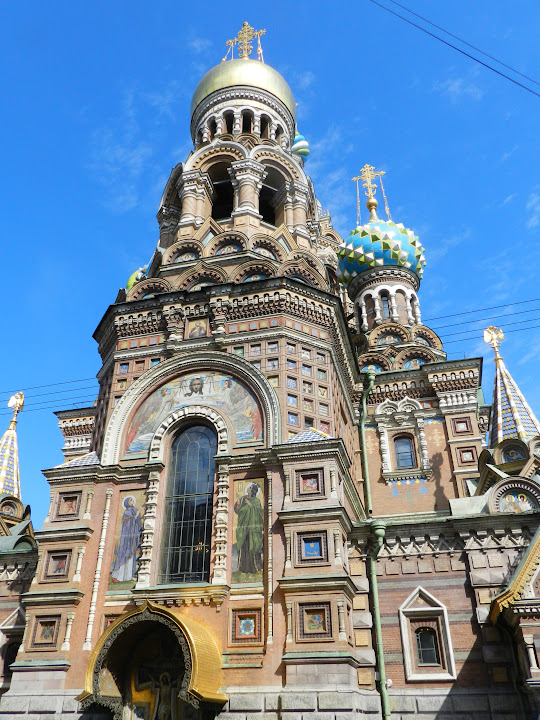 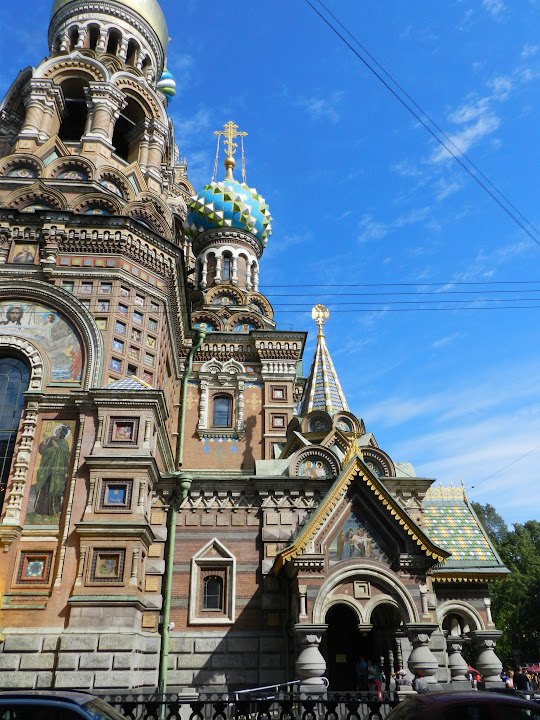 In Nevsky Prospekt - turn right (west) and cross the bustling avenue - heading to the Kazan Cathedral.

Alternative route from the Savior on the Spilled Blood Church to Nevsky Prospekt (for those who already beated the Griboyedov Canal: from the church  - head north along Griboyedov Canal Embankment (наб. канала Грибоедова), 100 m. Turn left and cross the canal over the bridge, 40 m. Continue onto Konyushannaya ul. (пл. Конюшенная), 200 m. Turn left onto Bolshaya Konyushannaya ul. (ул. Большая Конюшенная) and walk 600 m. along Bolshaya Konyushannaya ul. - until you hit Nevsky Prospekt. Here, turn left (east) and cross Nevsky Avenue - heading to the Kazan Cathedral. We've already visited the Kazan Cathedral during our "Along Nevsky Prospekt" blog. We recommend returning to this church, during the bright afternoon hours - to catch, once more, the sight of Singer building under the sun rays of the late afternoon hours: 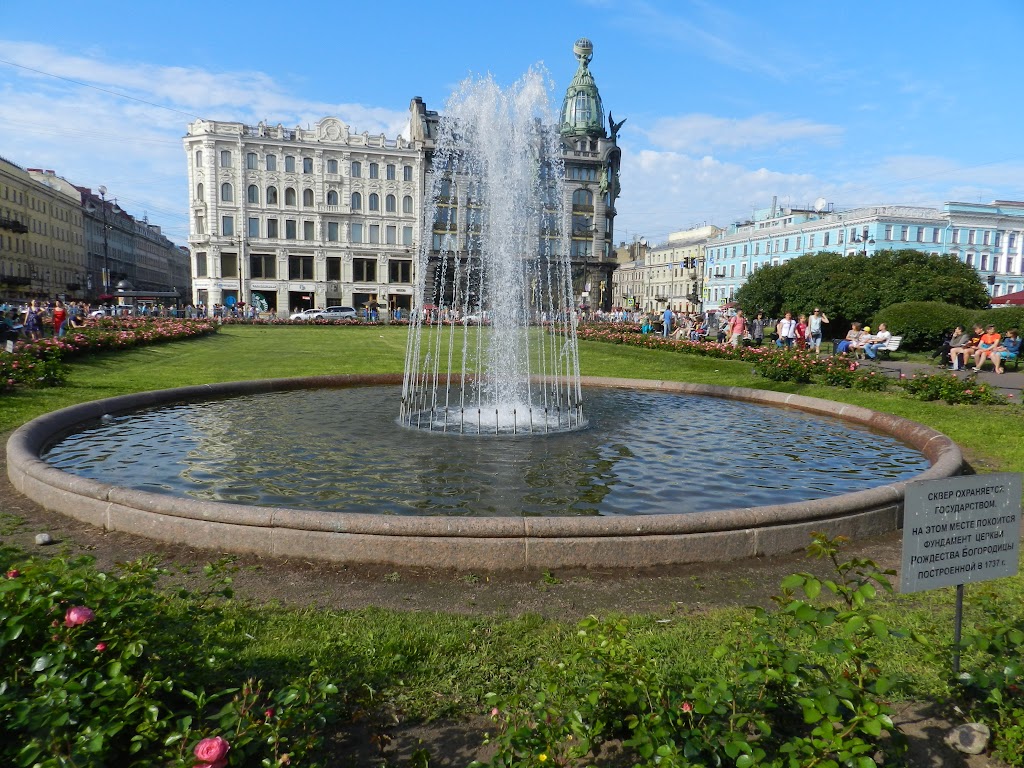 View of Kazan Cathedral, Singer Building and Nevsky Prospekt - under the sun rays of the late afternoon hours: 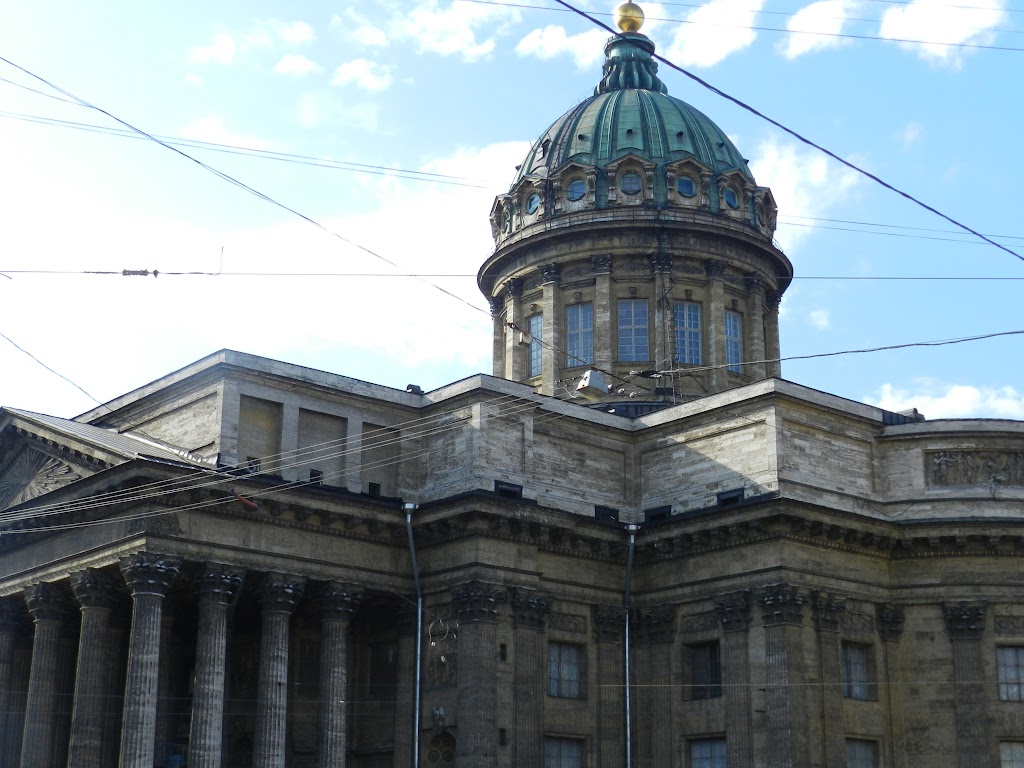 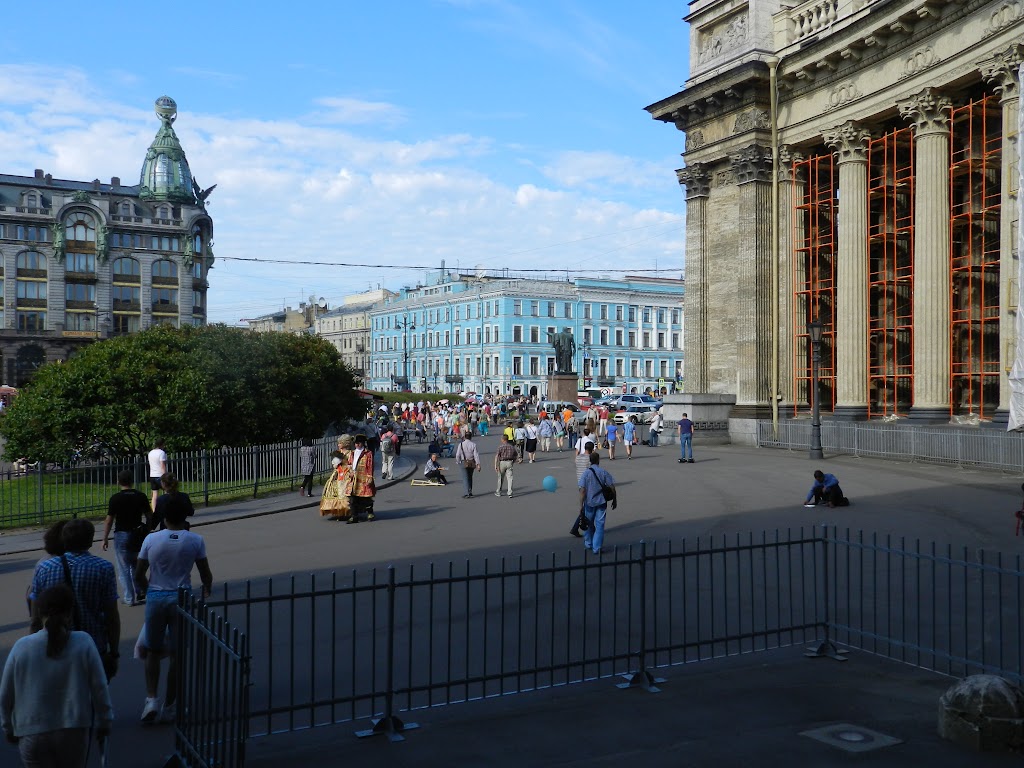 We already browsed the cathedral in the "Along Nevsky Prospekt" blog. We'll take the chance to visit, once more, its magnificent interiors. The afternoon hours are wonderful time to sample this church. Very few visitors, no tourist groups, natural afternoon lighting: 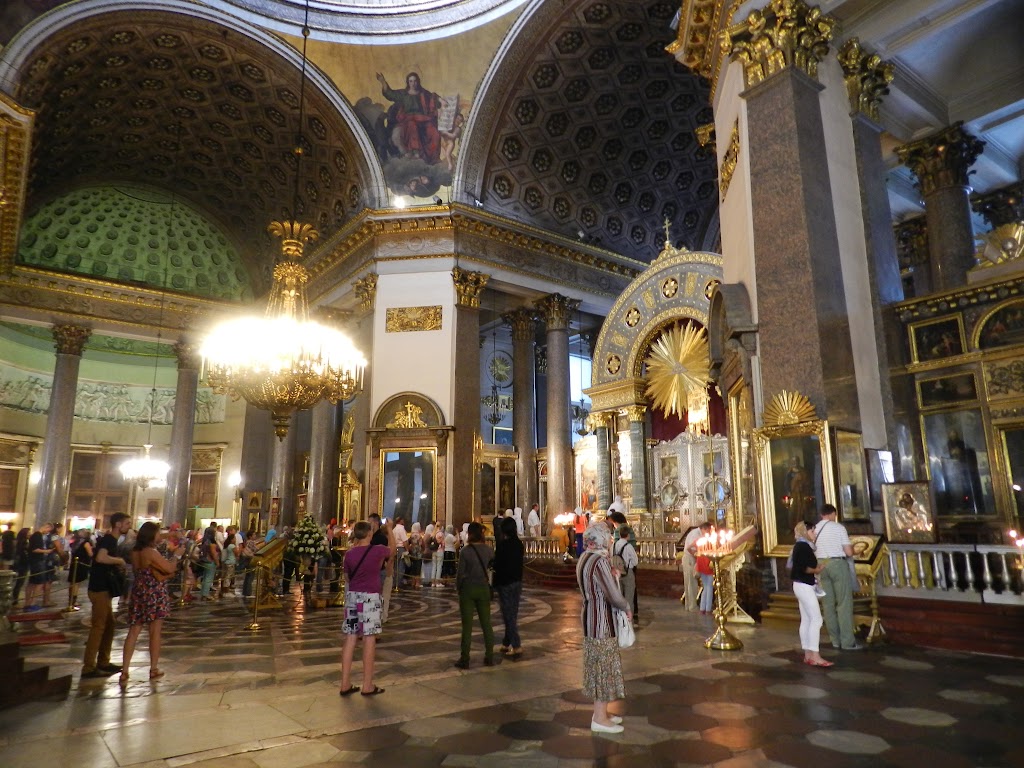 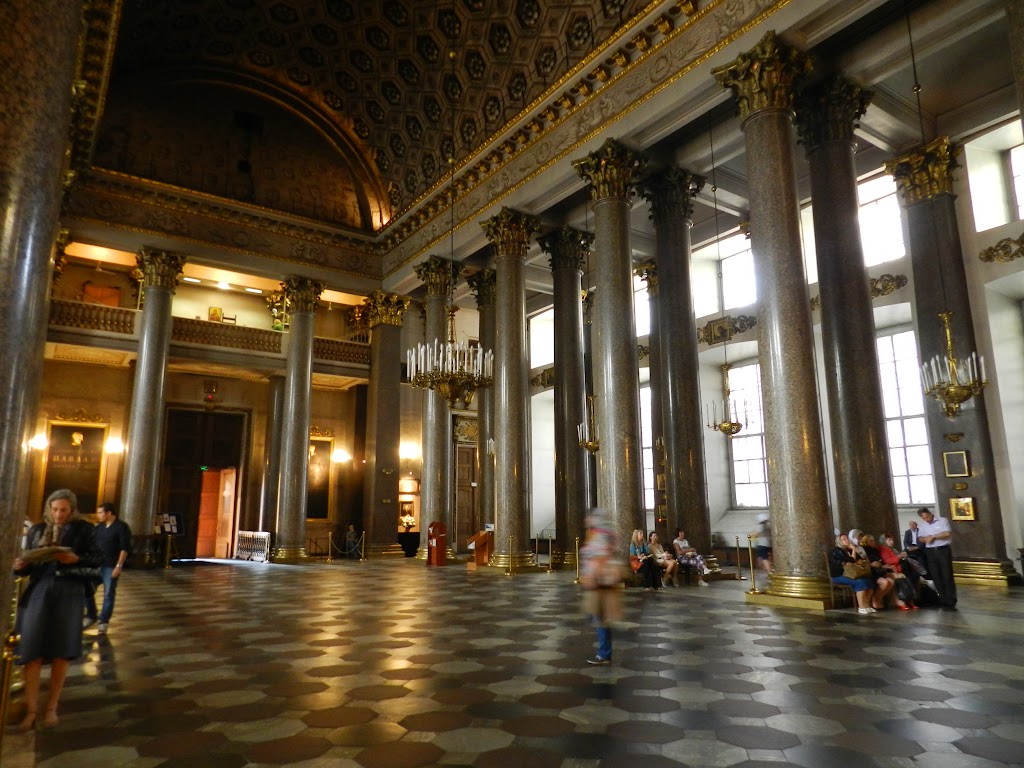 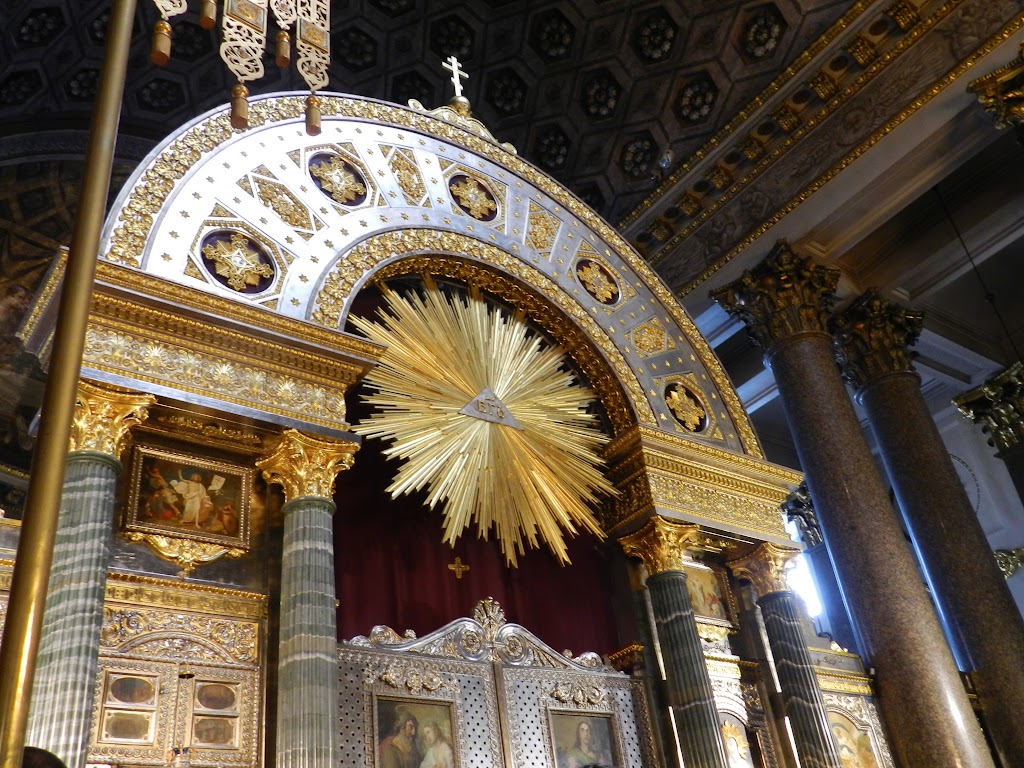 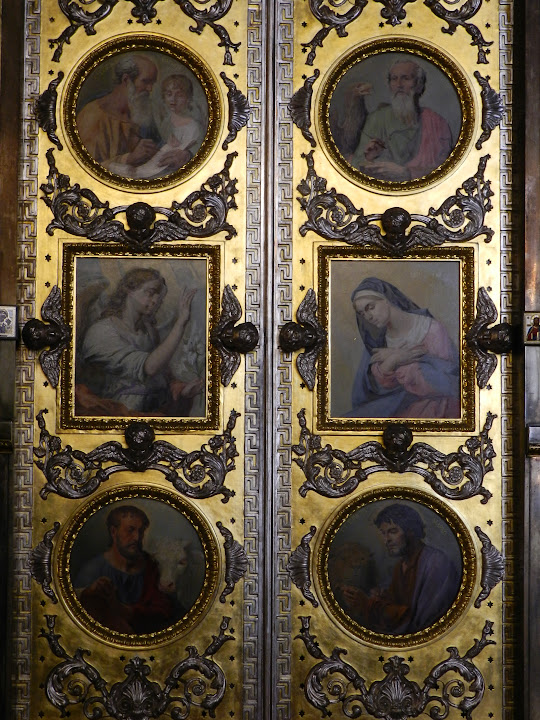 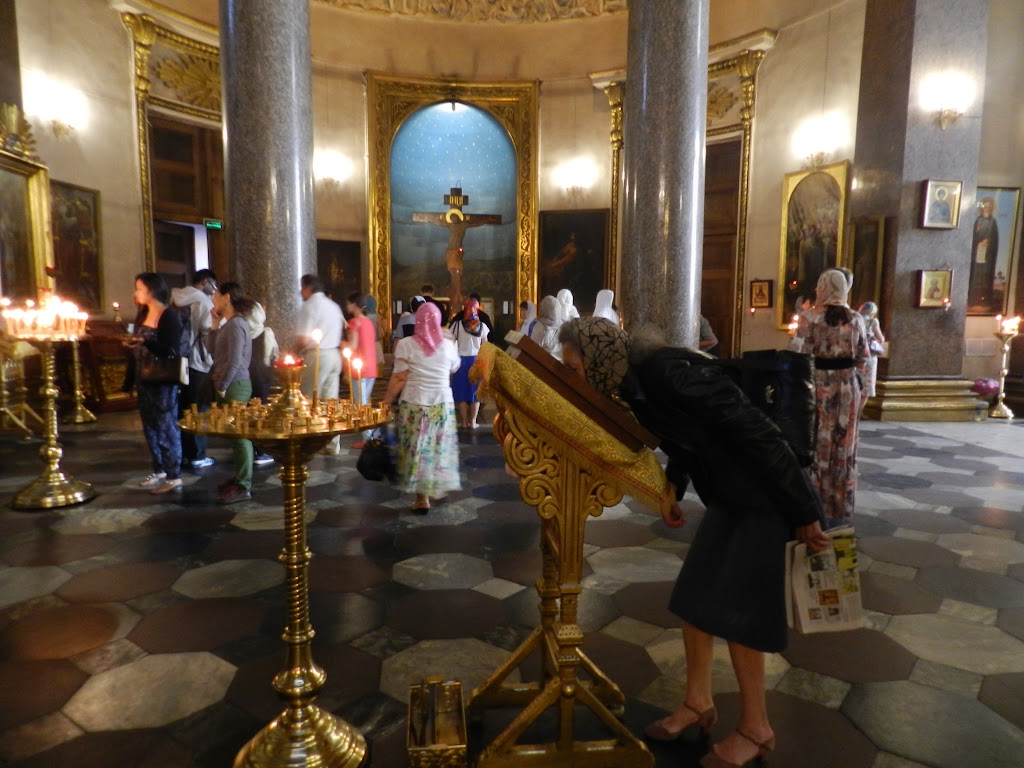 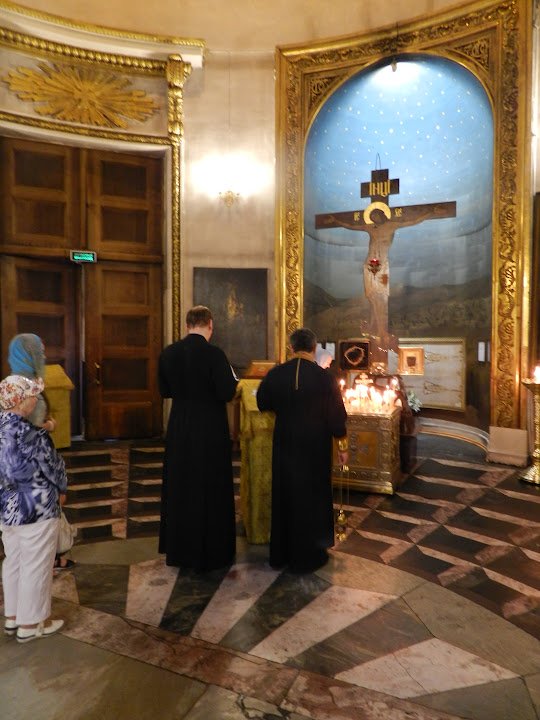 We shall leave the Kazan Cathedral and walk, along the EASTERN side of the church and, again, along the Griboyedov Canal - from north to south (better, along its west bank). As we start to walk down south - stands Kazansky Bridge on our left (east). The kazansky Bridge resides opposite the east colonnade of Kazan Cathedral. It, actually, carries Nevsky Prospekt across the Griboedov Canal. It was built in 1765-66 on a wooden bridge that had been standing since 1716. It is only 17.5 meters long. It has 95 meters width: 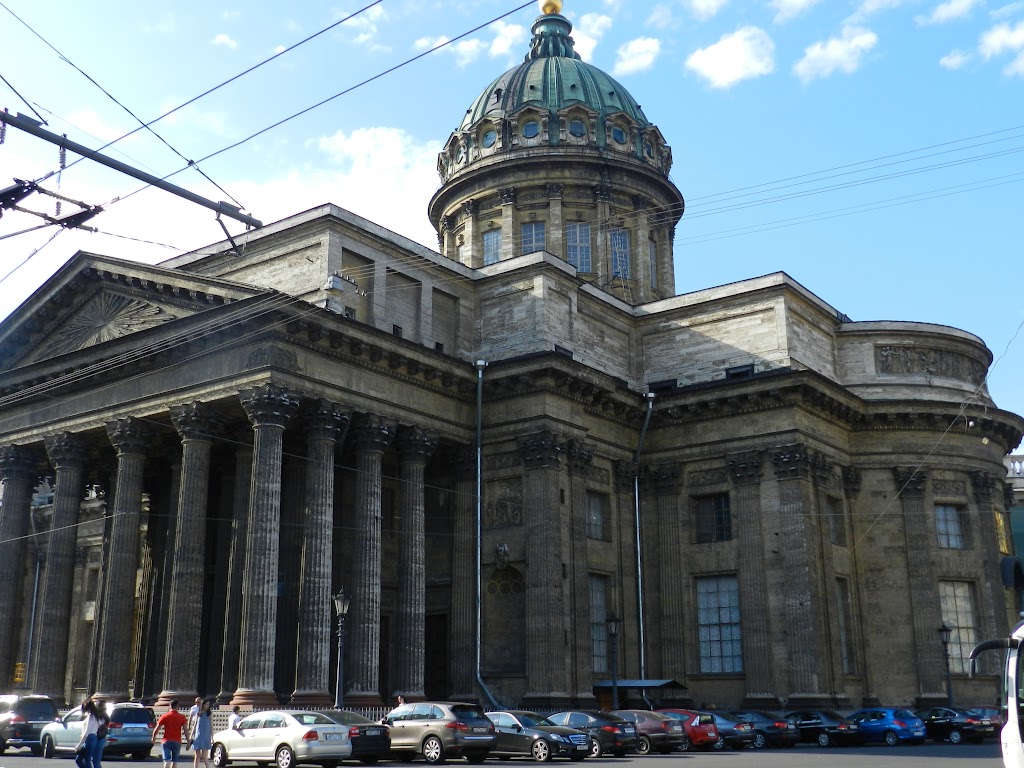 It is , approx., 350 m. walk from the Kazan catedral, along Griboyedov Canal Embankment - until we arrive to The Bank Bridge. An architectural gem. Like many of the bridges across the Griboedov Canal, Bank Bridge (Bankovsky most, Банковский мост) was built in 1825-26 to a design by German-born engineer Wilhelm Von Traitteur. He was an engineer who also built other bridges over the Griboyedov Canal, Fontanka and Moika. It is a 25-m-long pedestrian bridge. At 1.85 meters, it is also the narrowest in St. Petersburg. The Bank Bridge is one of the world's most beautiful pedestrian bridges, thanks to the wonderful sculptures of golden-winged griffons by famous local sculptor Pavel Sokolov. Sokolov was a graduate of the Imperial Academy of Art, who was most famous for his sculpture Milkmaid with Broken Pitcher in the Catherine Park at Tsarskoe Selo until, in 1825, he was commissioned to design not only the griffons for Bank Bridge, but also the lion statues for the Lions Bridge, and the sphinxes for the Egyptian Bridge. The griffons, with their strict classical form augmented by golden wings and beautiful curved golden lamp brackets, are, especially, magnificent, under the afternoon hours' sun. There is a legend still propagated among the citizens that if you rub a lion’s paw, you will inevitably make a fortune: 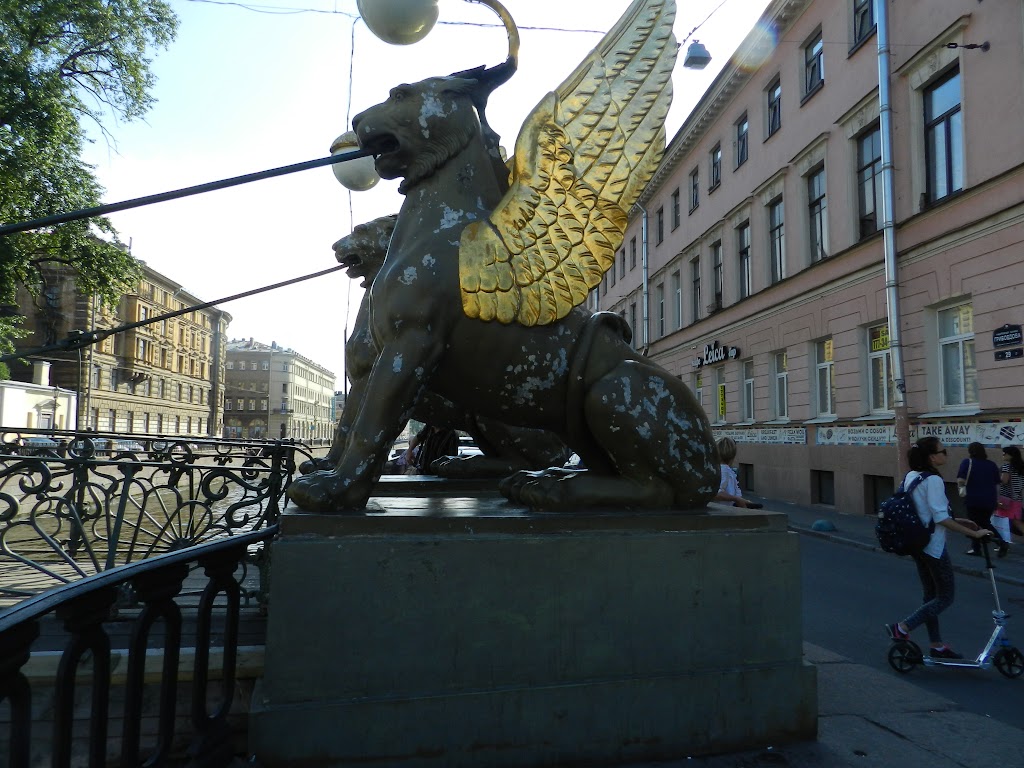 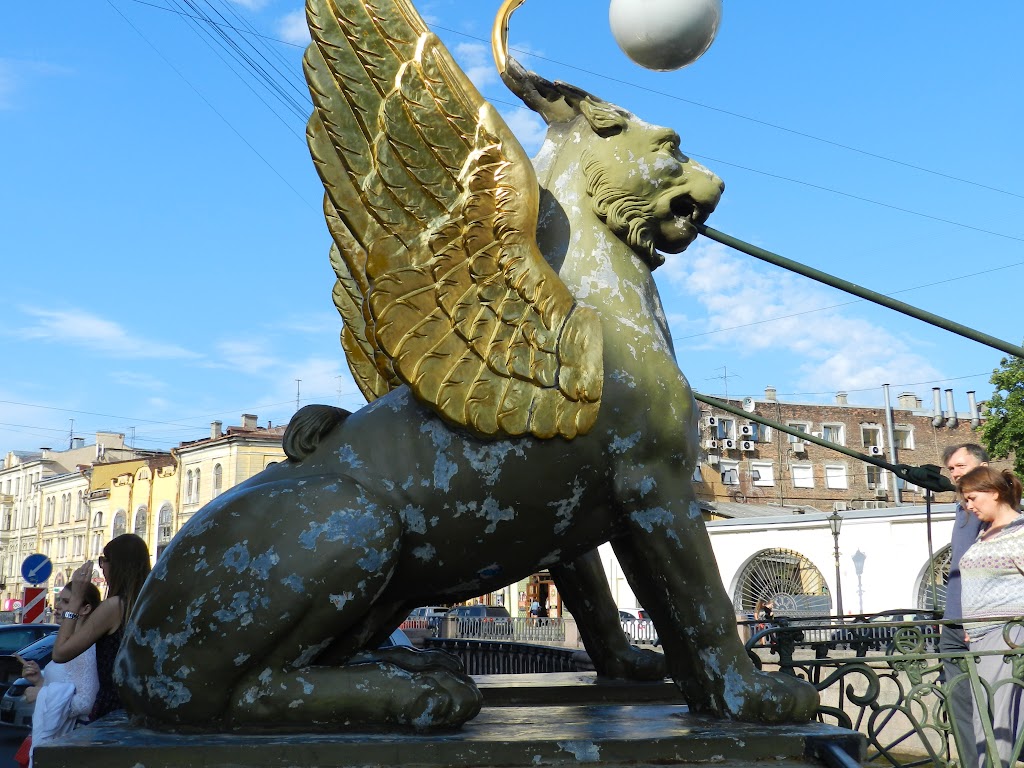 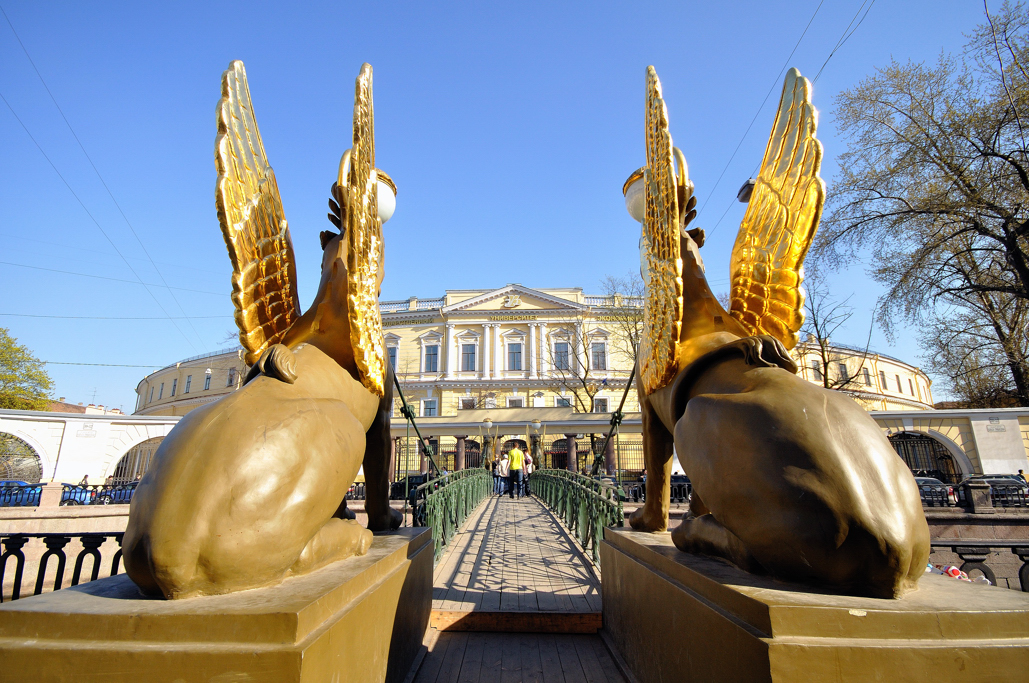 The deck of Bank Bridge is wooden, keeping the structure relatively light, and it has been replaced several times in nearly two centuries. As well as the griffons, Bank Bridge features beautiful cast-iron railings, notable for their ornate, palm-frond design. The original railings were removed at the beginning of the 20th century, and the current railings were installed in 1952, recreated from the original designs.

The bridge takes its name from the Assignation Bank, one of Russia's first public banks, which was housed in the beautiful neoclassical mansion WEST to the bridge, now, home to the St. Petersburg State University of Economics and Finance. 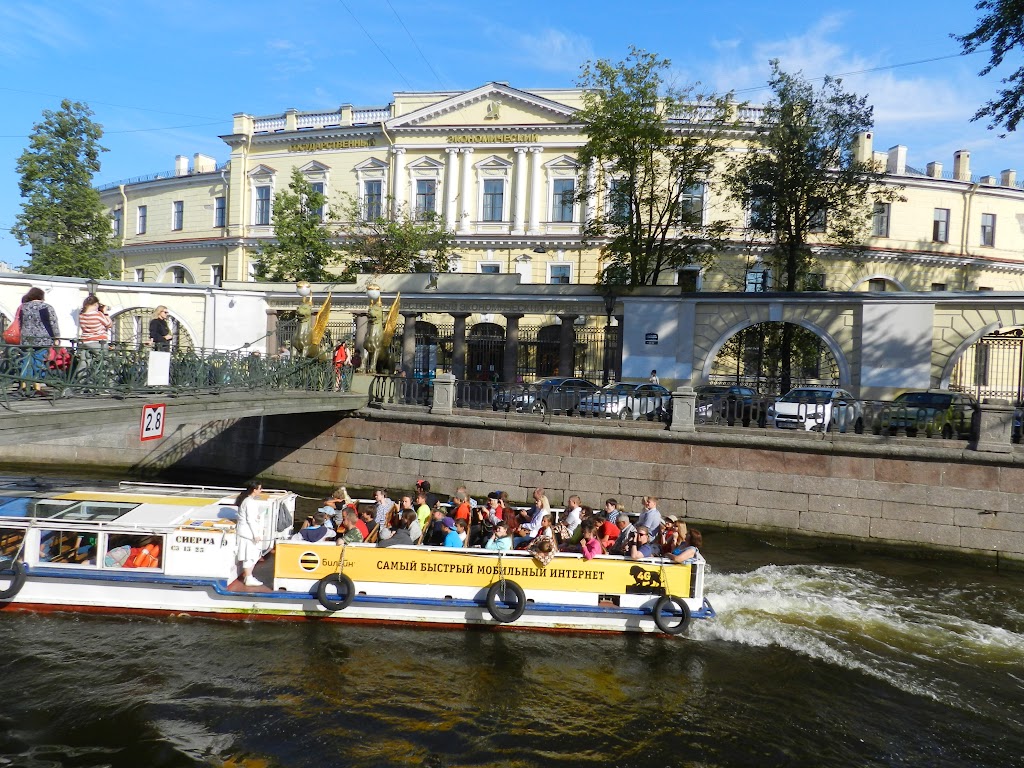 Turn your head back to the north: view of Kazan cathedral and the Church of Our Savior on Spilled Blood (and the Griboyedov Canal) from the Bank Bridge: 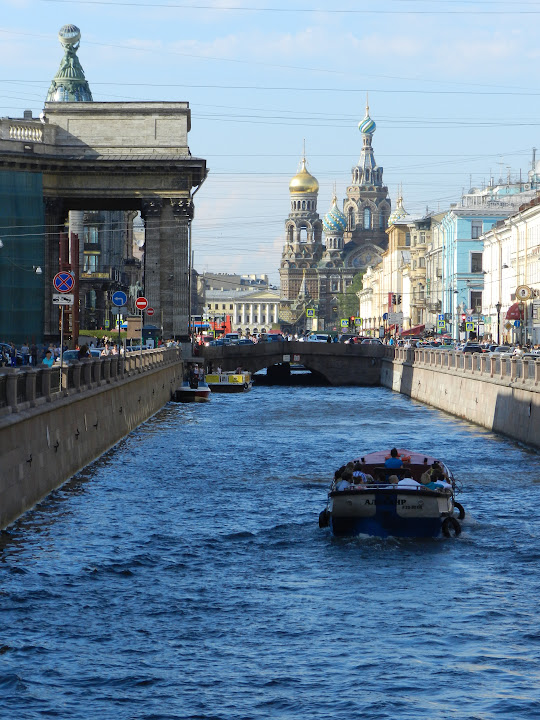 Continue 250 m. further south along the Griboyedov Canal and arrive to the Muchnoy Bridge. Again, we have elegant pedestrian bridge which slopes down to the two opposite banks of the Griboyedov Canal in a picturesque corner of central St. Petersburg near the Apraksin Dvor market. The name comes from the flour ("muka" in Russian) warehouses that stood nearby in the 18th century. The first wooden bridge was built here in 1931. Twenty years later, it was replaced with the current  single-span steel bridge, which is light enough to rest on the embankments without extra reinforcement: 450 m. further south is the Demidov Bridge. It carries carries Grivtsova per. from south-east to the north-west. Demidov Bridge dates back to the 18th century, when a wooden bridge stood at this site. The current iron bridge was designed by engineer E.A. Adam, and erected in 1834-35. Its name comes from a wealthy mining family of the 19th century whose Petersburg estate stood nearby. The Demidov Bridge was fully restored in 1999 and upgraded with charming lamps:

The last bridge in our short route is the Sennoy Bridge - 180 m. south to the Demidov bridge. This small bridge stands whre the Griboyedov Canal is in a tight curve - slighting south-west from this point. It was built in 1952 and, replacing a wooden predecessor of 1931. Next to the bridge, the rows of marshrutka minibuses provide a convenient means of getting from the metro to the Mariinsky Theatre. 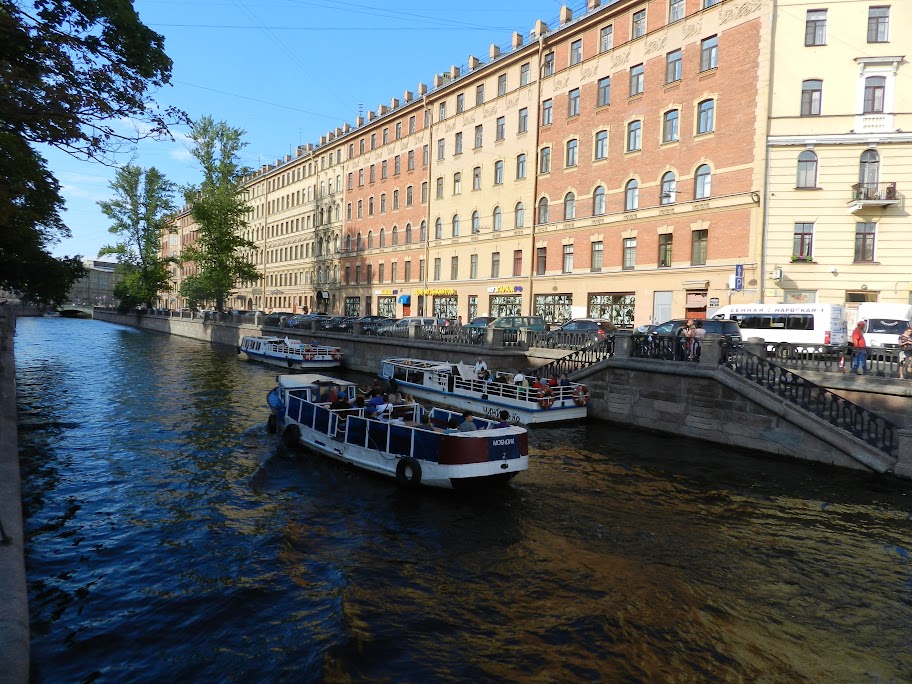 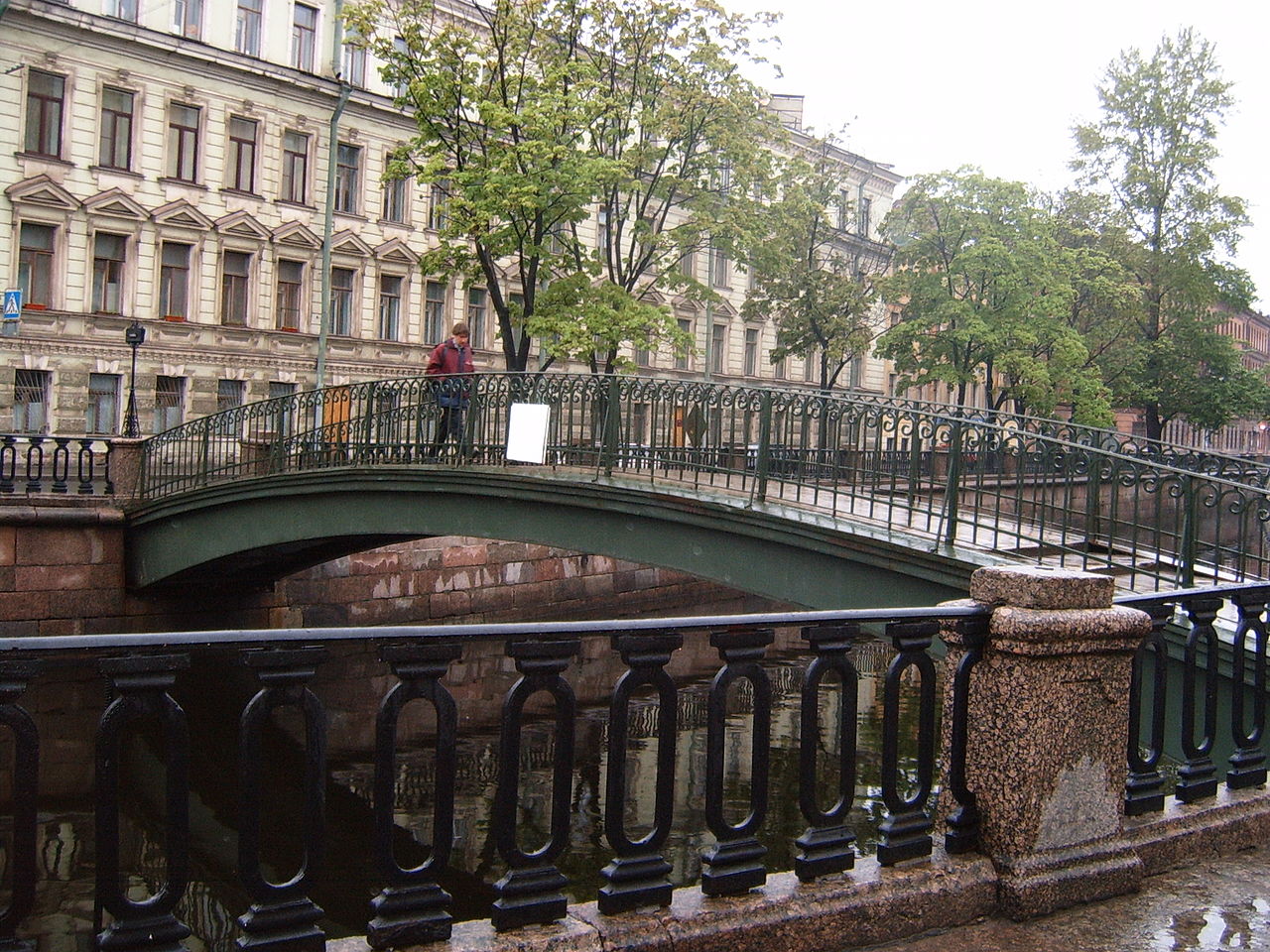 Cross the Griboyedov Canal from west to east over this bridge, continue 150 m. eastward and you face the Sennaya Square with its Metro stations: 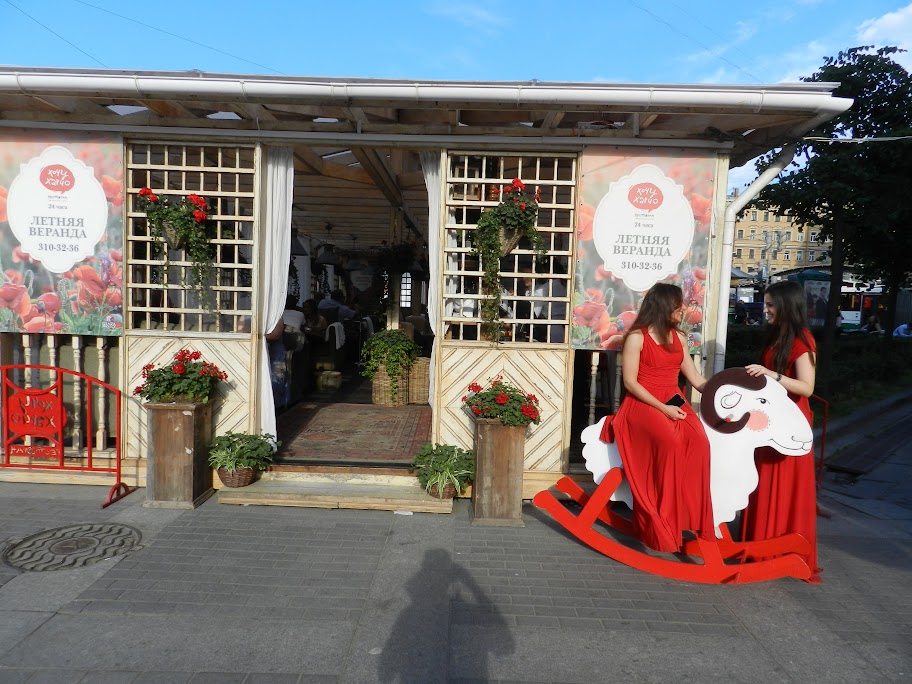