I'll take you, step by step, to a memorable day along the Thames along one of its unknown, but, still, beautiful sections. Full with nice views, modern architecture. Its last section from Putney Bridge to the Imperial Wharf is totally hidden from the herds of tourists and one of the best experiences I've seen in London !!!

Lunch: 5-10 minutes walk from Putney Bridge tube station - there are 3-4 restaurants. Other options are dining in one of the restaurants along the Thames in Fulham or around Fulham Football Club.

Arriving to T junction, turn LEFT (Huntington Avenue) heading to Chiswick Bridge (attention: turning right will bring you to the opposite direction, to Kew Bridge !).

Walk 8-10 minutes until you see Cavendish Road on your left. Turn RIGHT to a small alley with nice houses. When this alley starts to bend leftward, you'll see a small signpost of the "Thames Path" pointing to the RIGHT to a small path leading to the Thames. After walking 5 minutes you arrive to the Thames. Turn left, walk along the river in the direction of Chiswick Bridge. 300 meters before the bridge you have to bypass a group of houses to return to Chiswick Bridge.

DO NOT PASS THE BRIDGE. Find the stairs down to the river, on your right, just in the beginning of the bridge. Continue along the river (starting from a small boats' dock). (Note: you may pass half of the bridge to take photos of the river and the new residence projects of Chiswick). 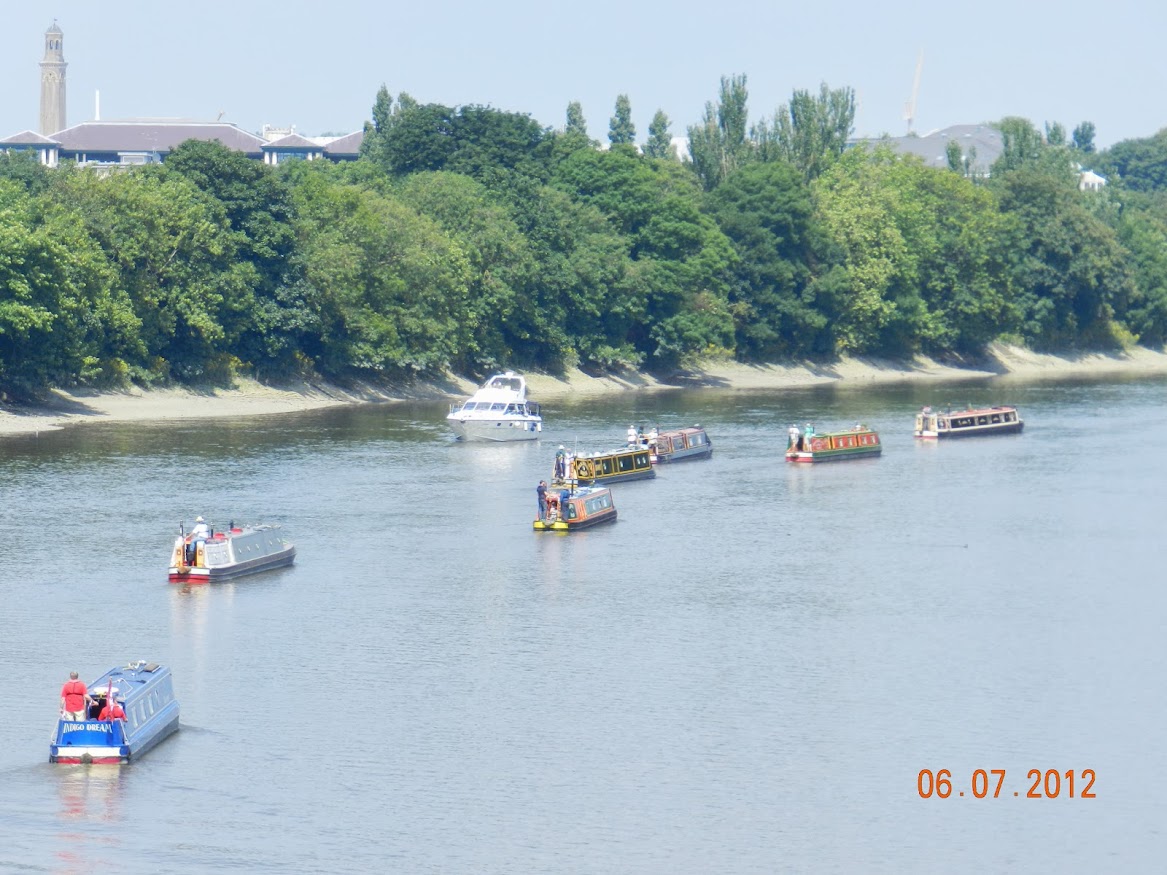 On your right, along the river bank, you'll see many nice houses: 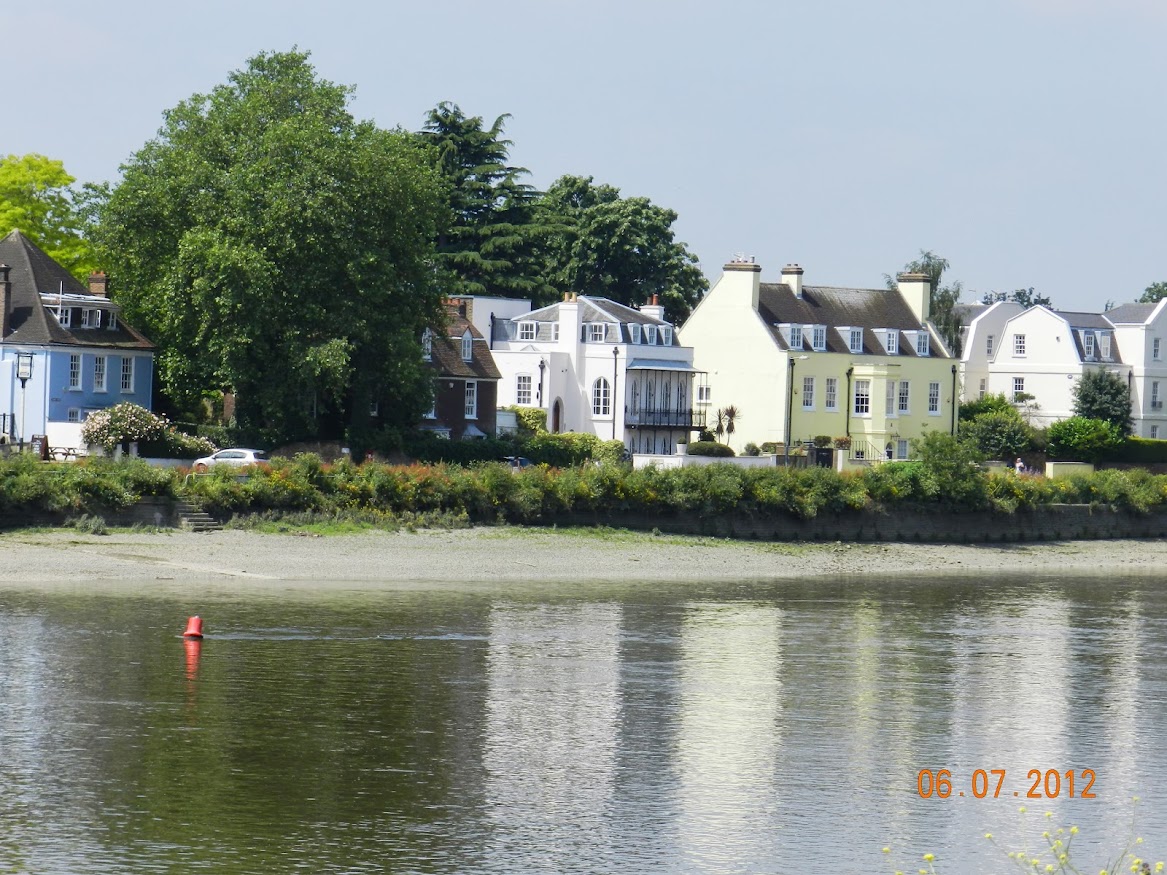 Walk along the river - either in a tarmac walking path or along the asphalted path for cycling. After 1 km. walk you arrive to the Chiswick Boat House. Here you have another BIG bypass. Walk along the road, passing the Rugby, Football Health & Racquets Club and Chiswick House Sports grounds. You return to the river exactly where the Emmanuel School Boat Club stands on the river's bank. You'll find yourself behind the Barnes Bridge (the bridge is on your back).

Walk along the river with nice houses and mansions on your left (Duke's Meadows and Cornish Pier Estate projects) and the Chiswick Pier and the Thames on your right: 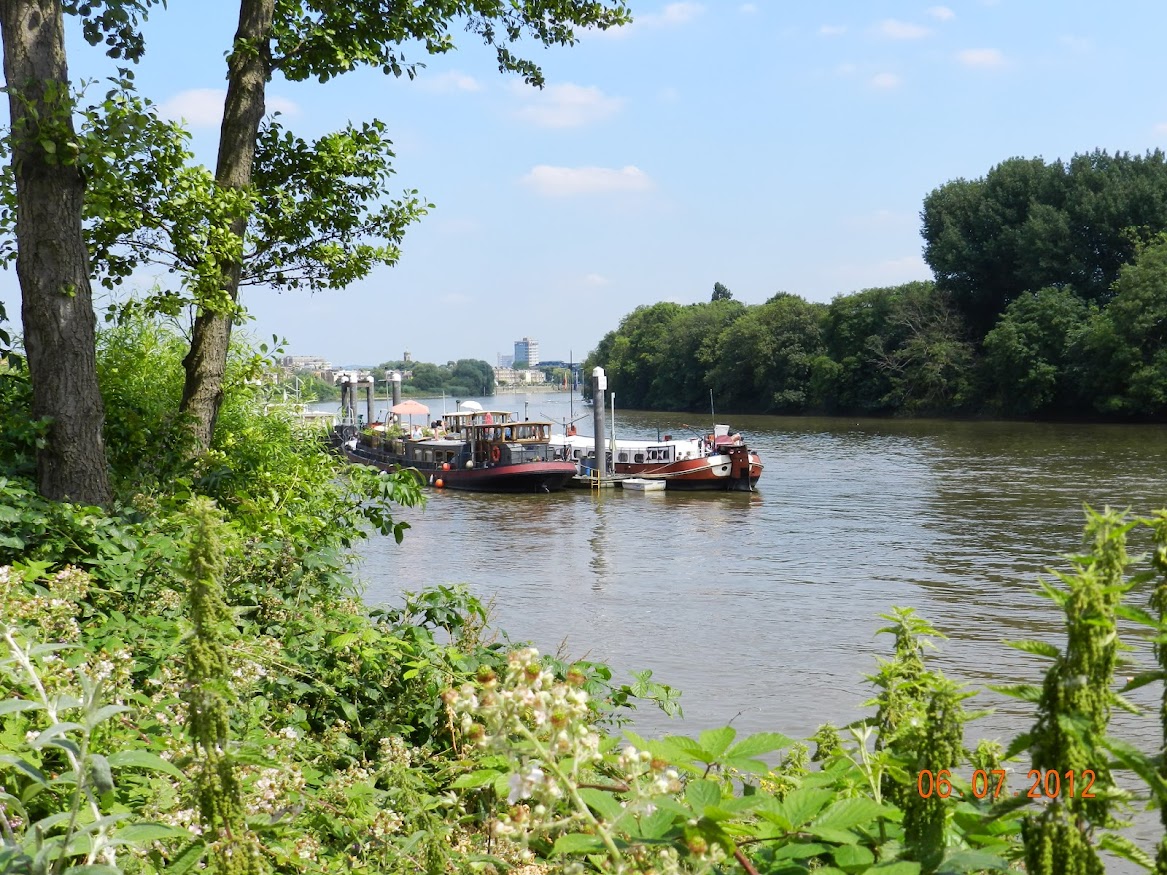 Cornish Pier Estate houses in Chiswick along the Thames: 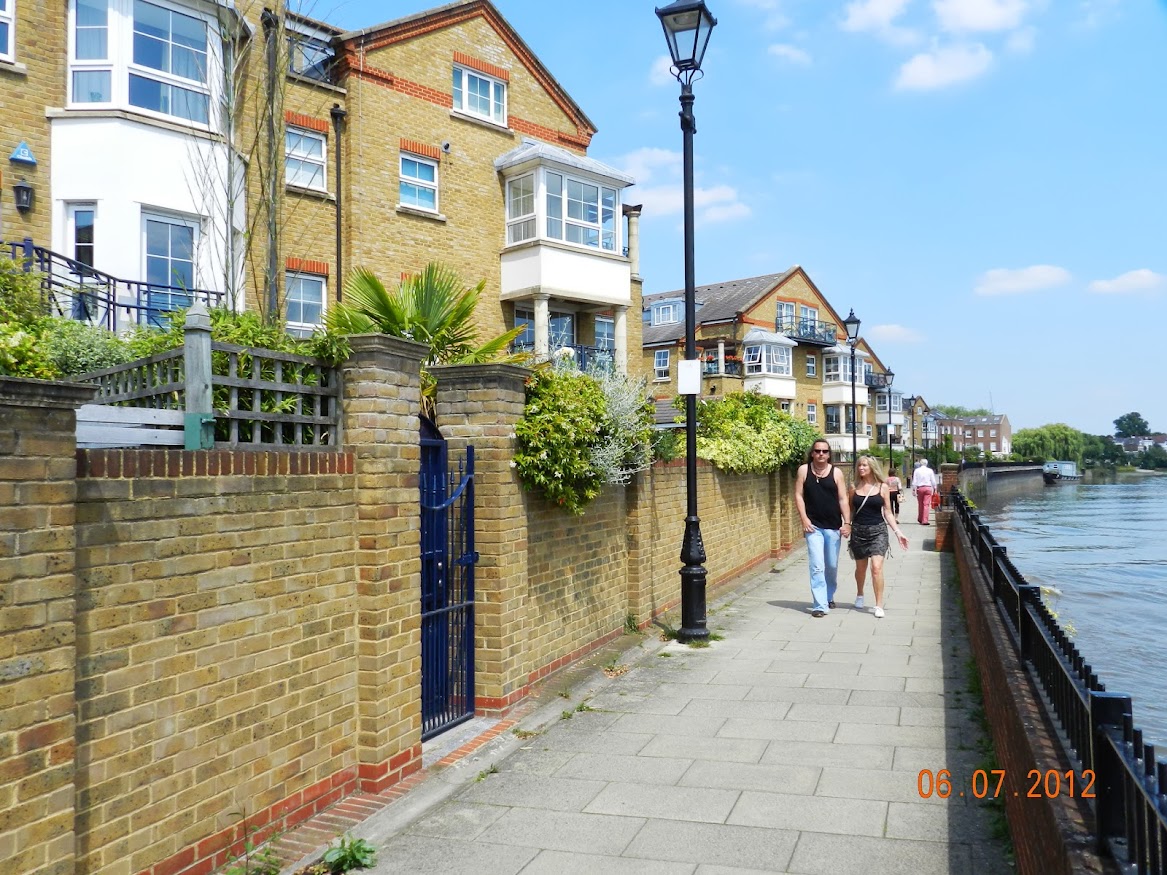 Now, you face another big bypass. Leave the river and walk along the long Chiswick Mall road with its aristocratic mansions until you arrive the Black Lion pub. Here you return to the river. Continue to walk along the Thames heading to Hammersmith Bridge. 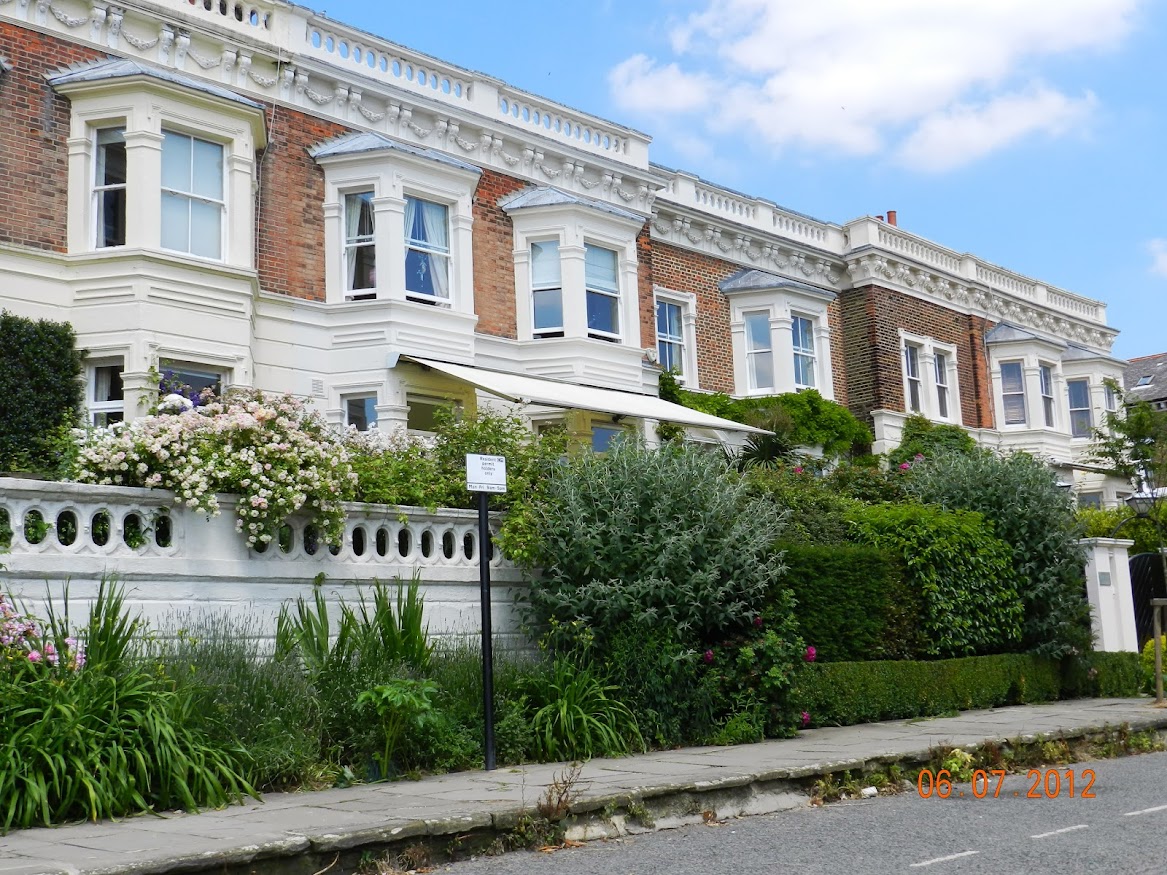 The Rutland Arms Pub near the Hammersmith Bridge: 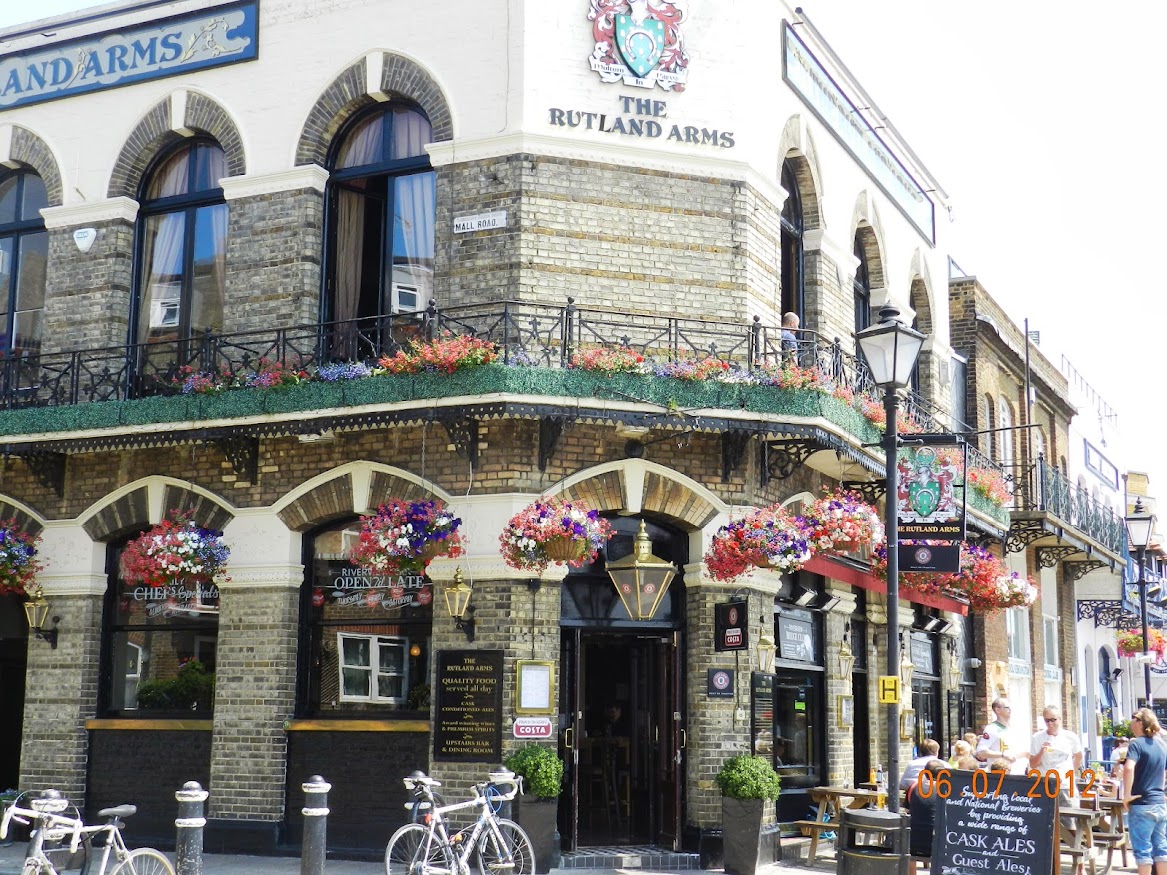 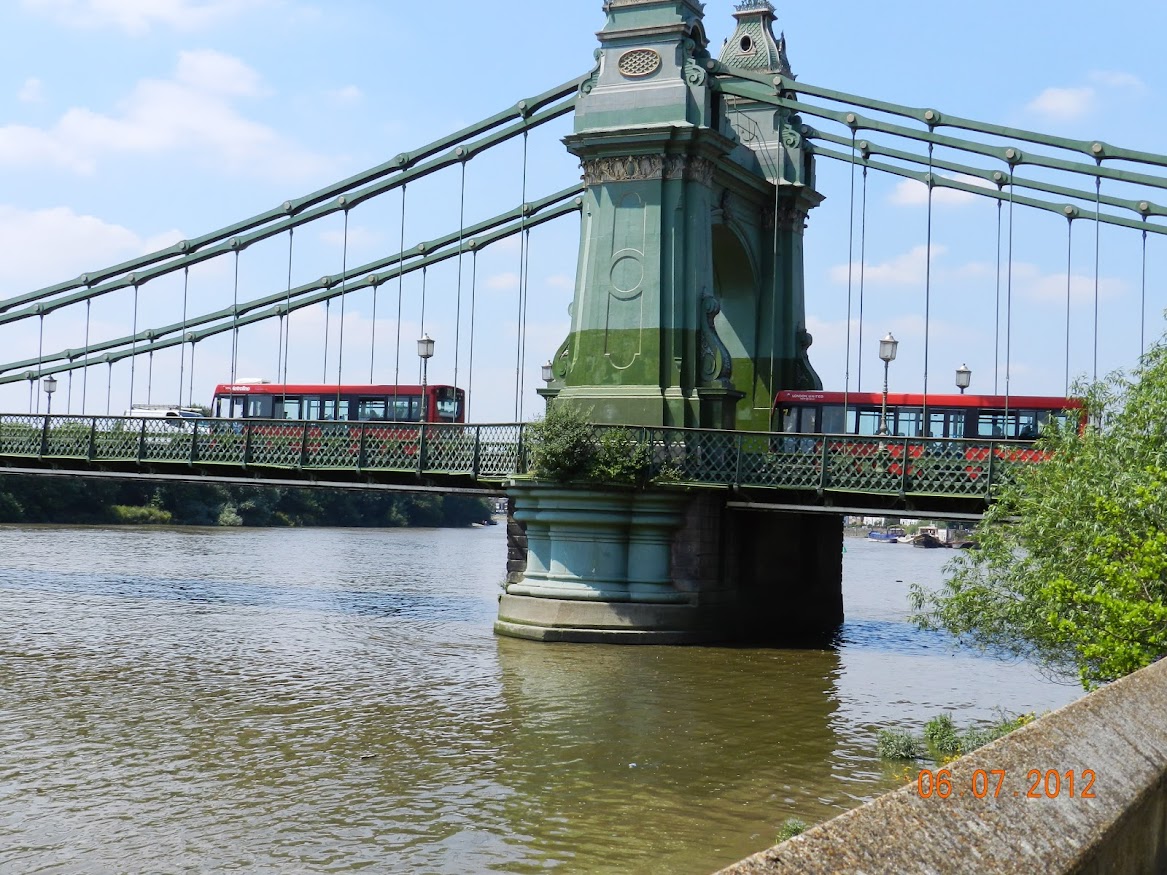 A house along the Thames - near Hammersmith Bridge: 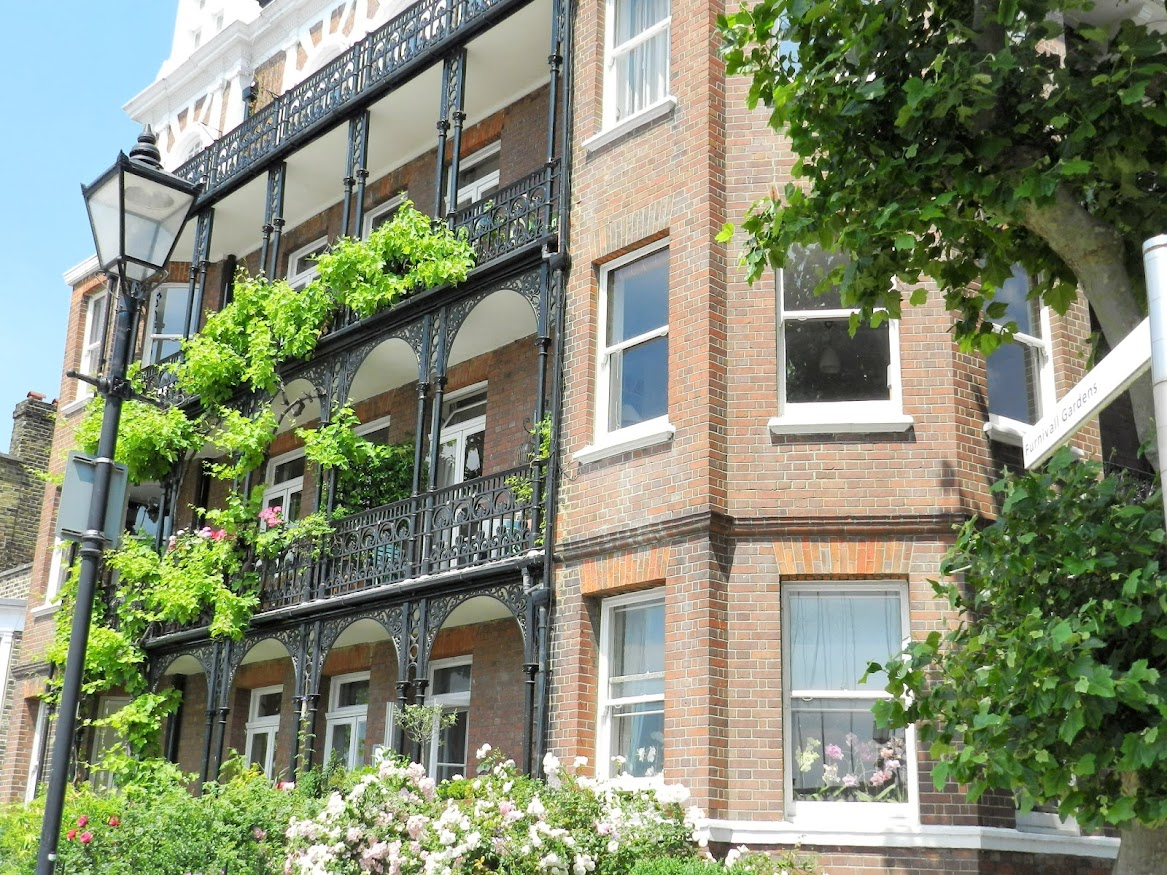 Passing to the left of Hammersmith Bridge you face another bypass of the Thames: you take the Criep Road and the St.George's Vision 2000 project is on your left. You meet, again, the Thames in Fulham and continue along the Thames with on an attractive promenade. 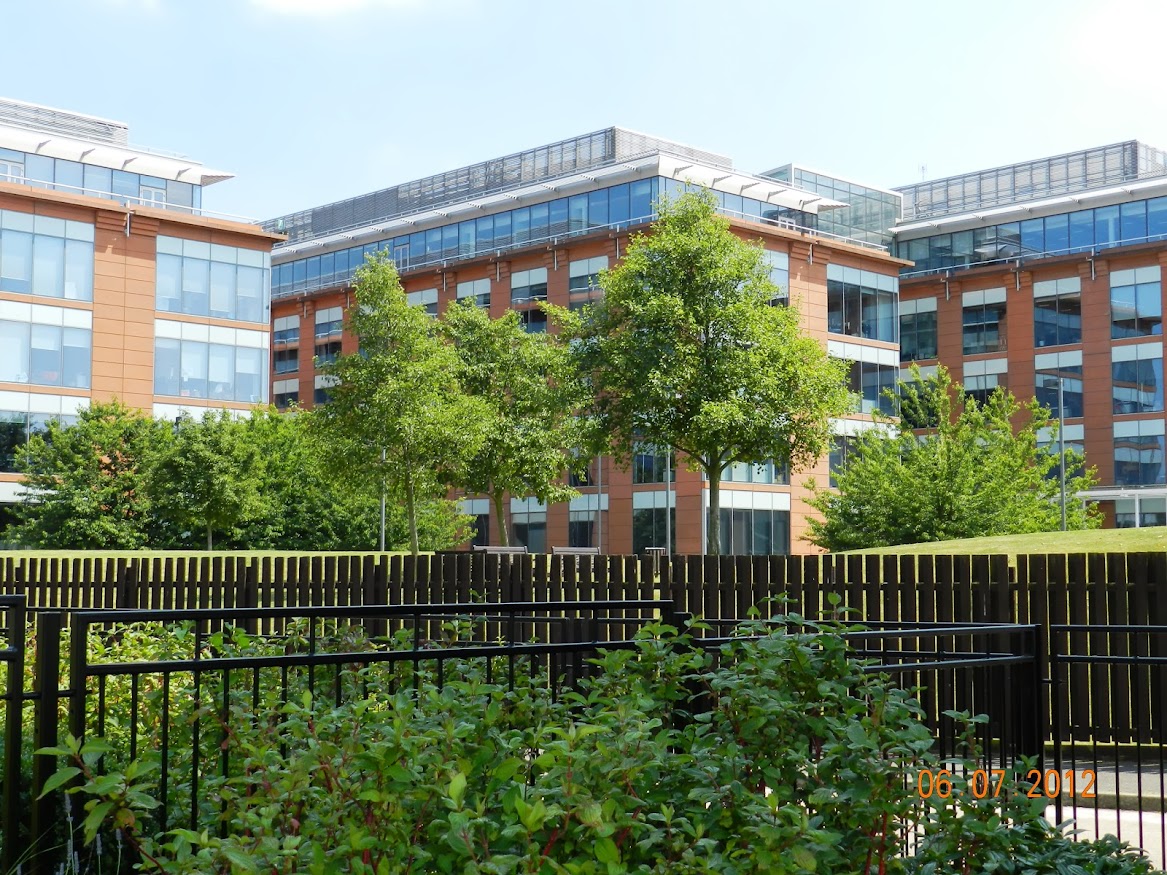 Continuing along the promenade you pass through other attractive, completed buildings on your left (the northern bank). 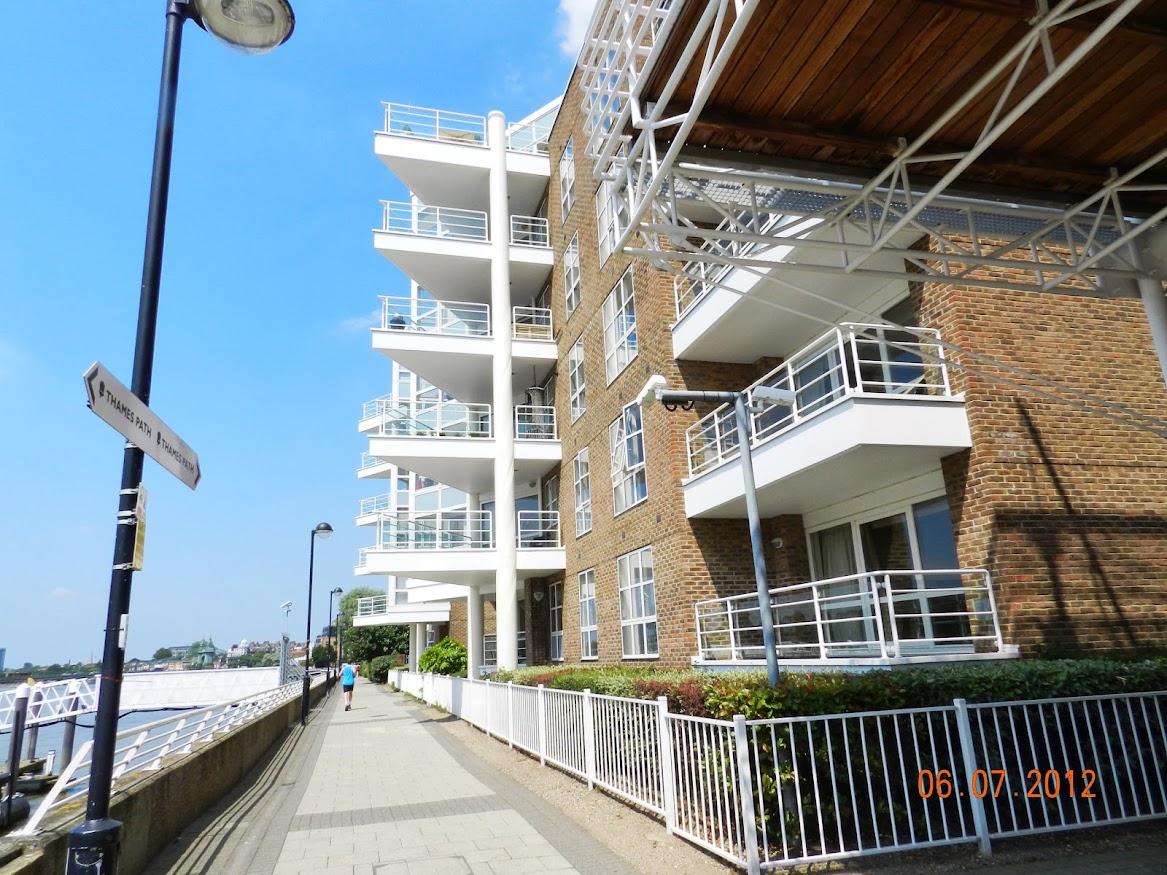 On the opposite bank you'll note the decaying Harrods Furniture Depository. 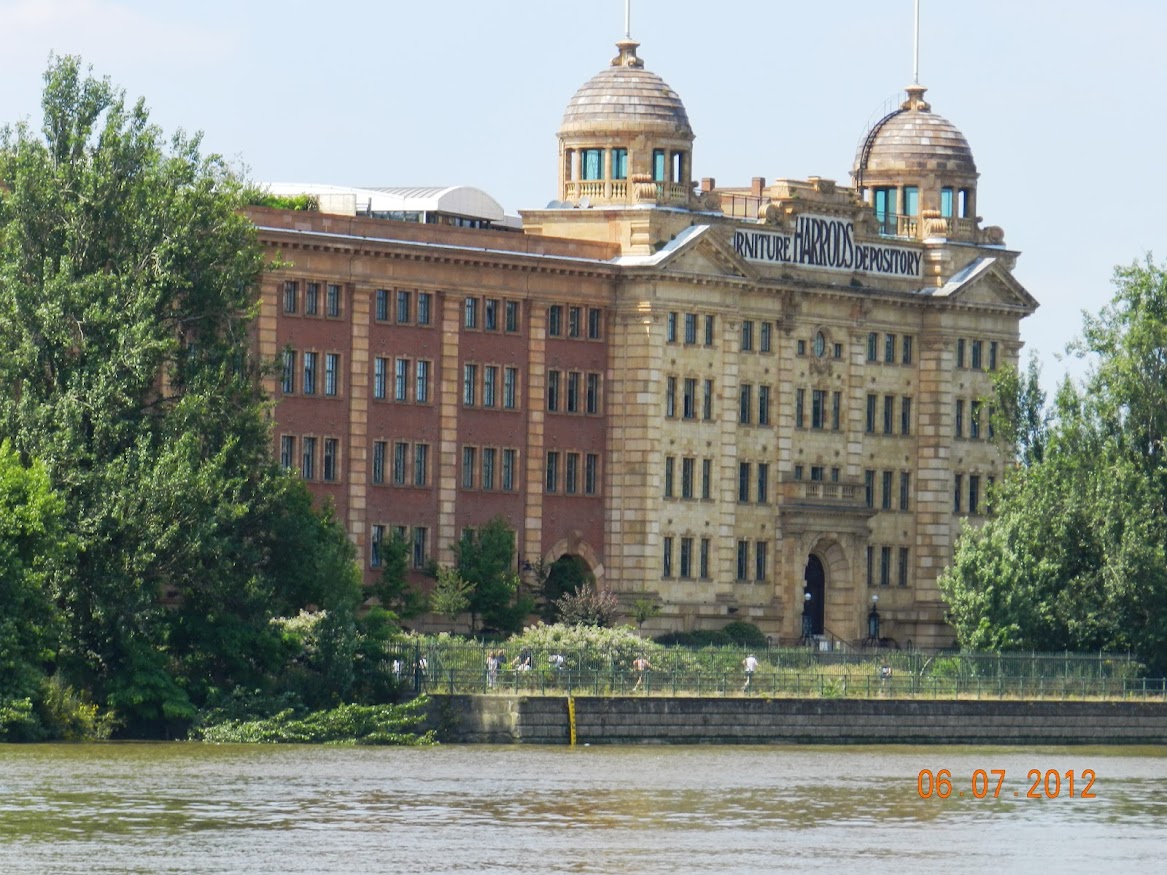 On the mid-way between Hammersmith Bridge and Putney Bridge - there is another small (50 metres) bypass. You return to the river through Adam Walk road (signpost may be misleading !). You meet the river, again, in the Rowberry Mead Gardens. Near Stevenage Park (with black metal gates) you are forced to bypass the river, just near the black walls of the Fulham Footbal Club (FFC) premises. Continue walking until the (eastern) end of FFC stadium. 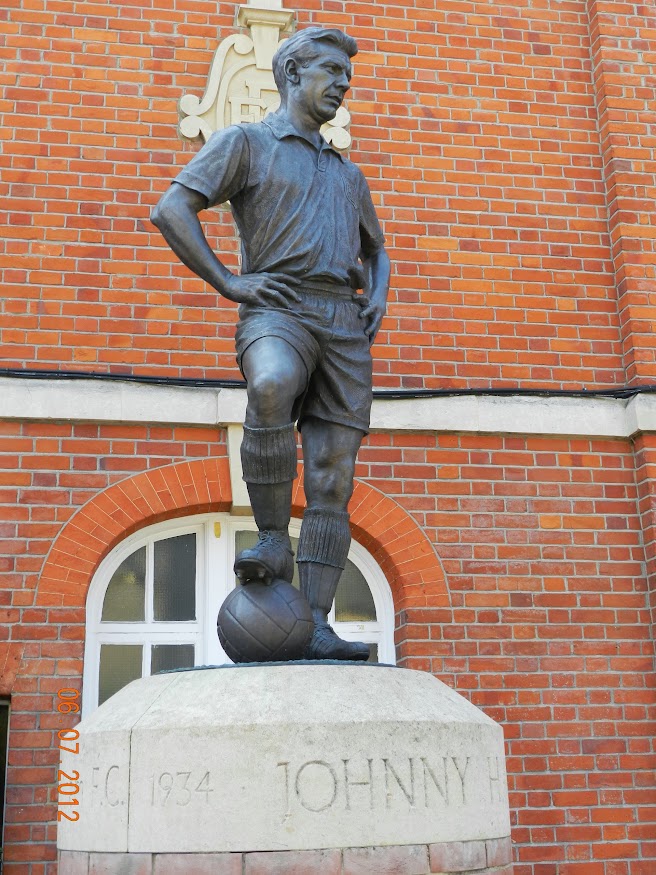 Returning to the river  - you'll see the Bishop's Park and Fulham Palace on your left. A special Tip is devoted to the Fulham palace and Bishop's Park. Please allow 1.5 hours to these attractions. At this point, we recommend that you keep walking along the park fences above the Thames bank - until you arrive to the park exit. Another 50 metres and you face the Putney Bridge tube station. 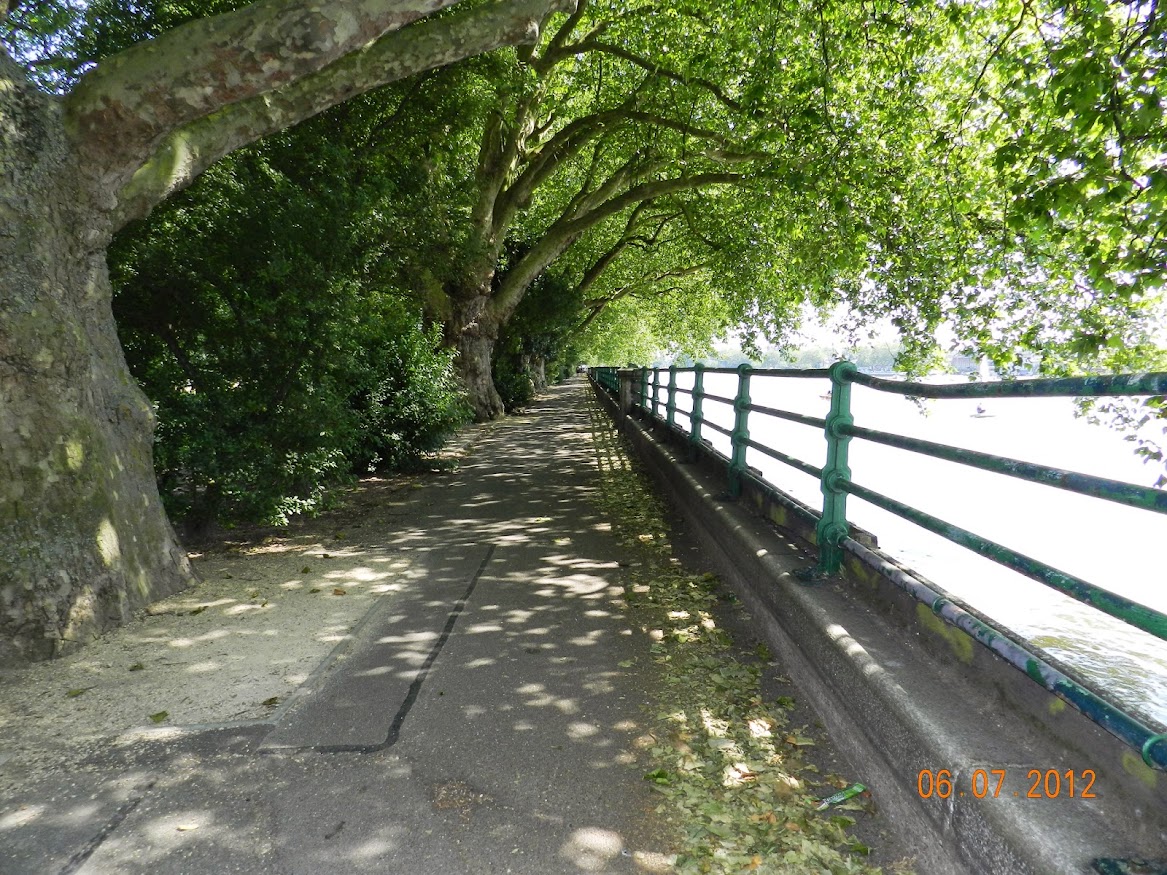 I bet that 99.99 percent of London tourists never heard about the Imperial Wharf area, or, at least, never visited this area. I think that the IW district is one of the three or five most impressive sites in London or around it. It is located between Putney and Chelsea. Unless you are a local (even if you are as well!) it is not going to be that easy to find. This is unforgettable area !

Leaving the Imperial Wharf overground train station - head westward (to the new buildings/marina) in the river direction. The station is 200 metres from the river. 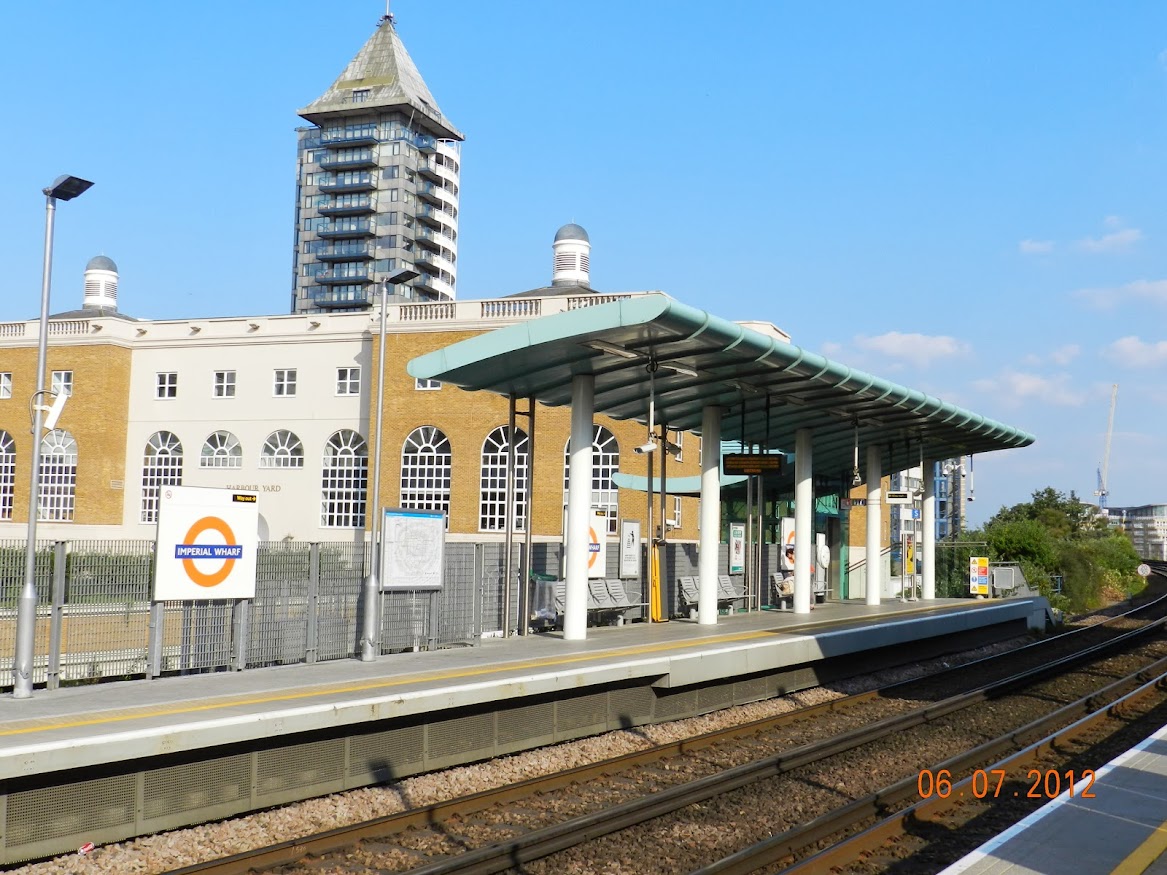 Enter the luxury Wyndham Hotel (after getting permission from the security staff members): 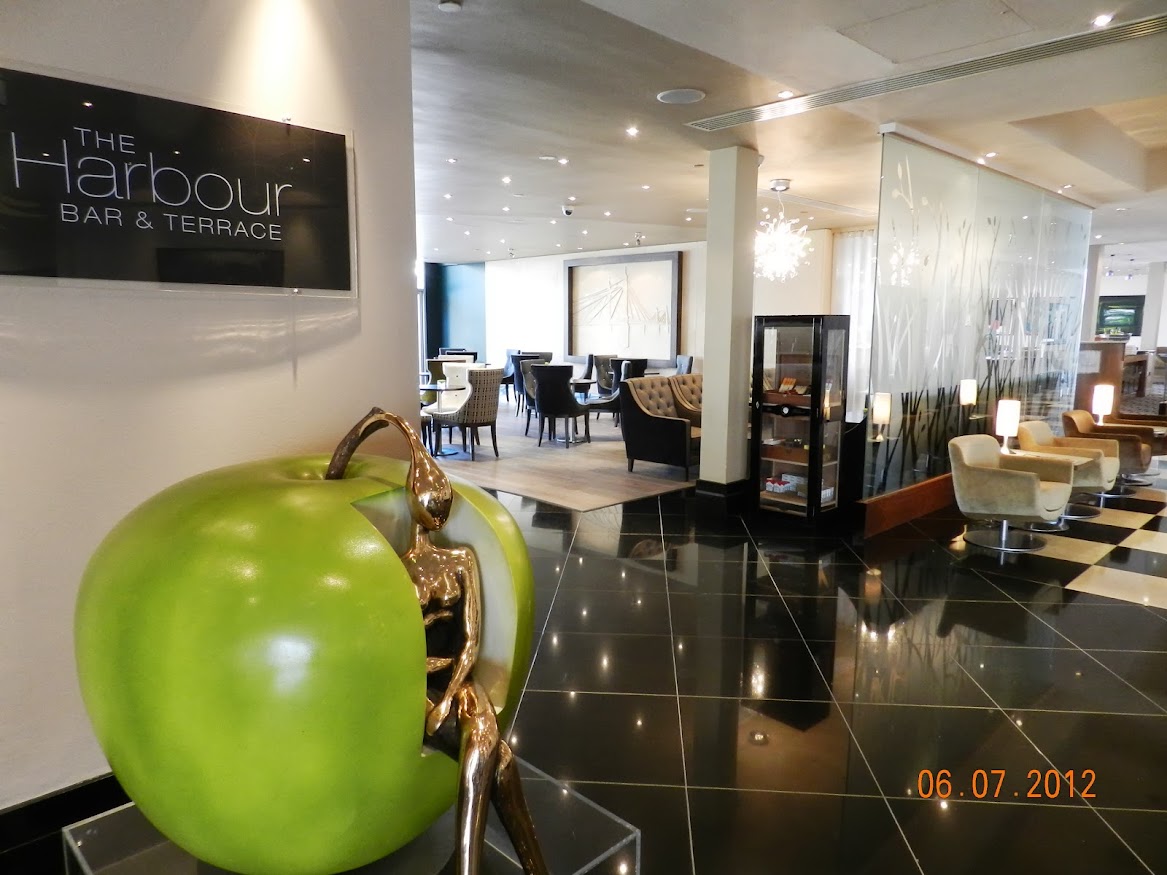 After poking the hotel lobby and restaurant - continue to the hotel's terrace to take photos of the Imperial Wharf Marina. The surrounding and athmosphere are very posh and aristocratic: 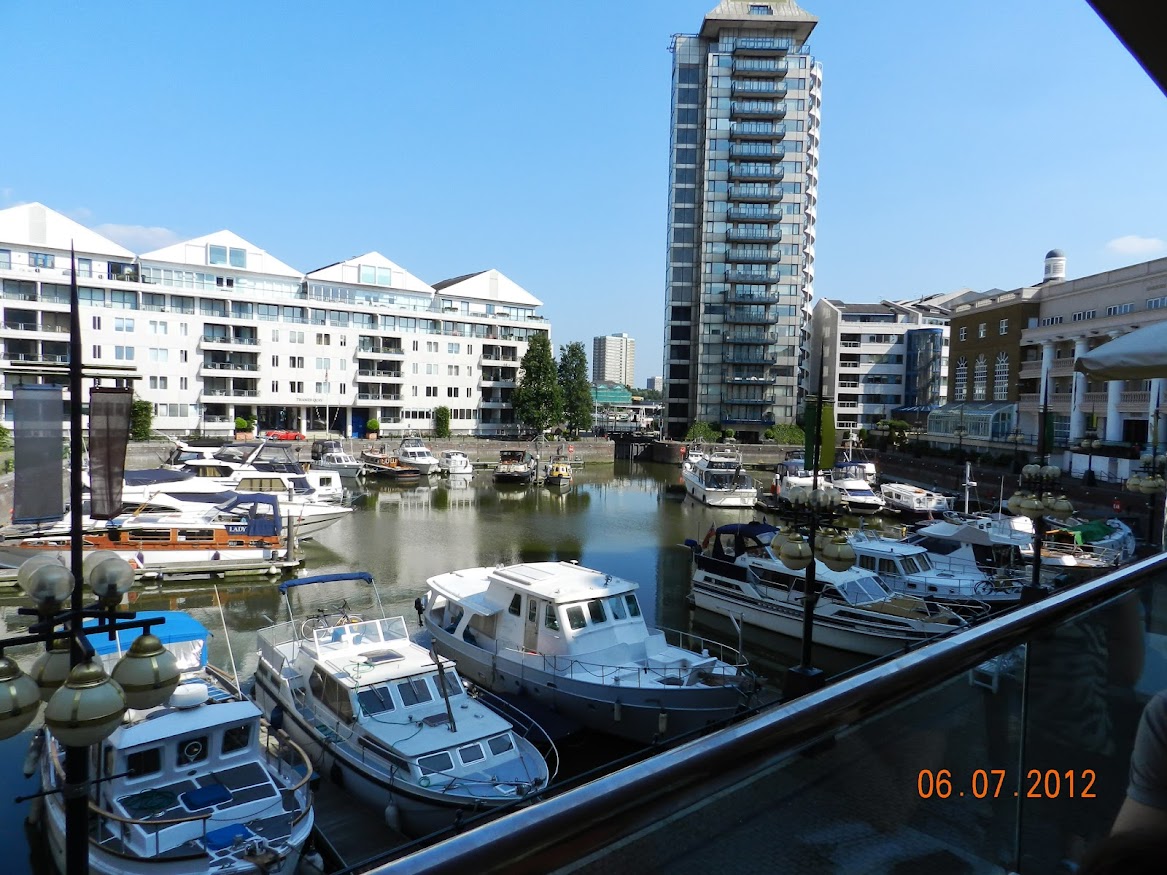 The section of the Thames beneath the Imperial Wharf station is called Chelsea Harbour. Walking along the pier, in this part of the river, will leave you breathless. Come during the afternoon hours of a bright day and you'll agree with me that the scenery along the northern (opposite) bank is astonishing. Let the pictures speak for themselves: 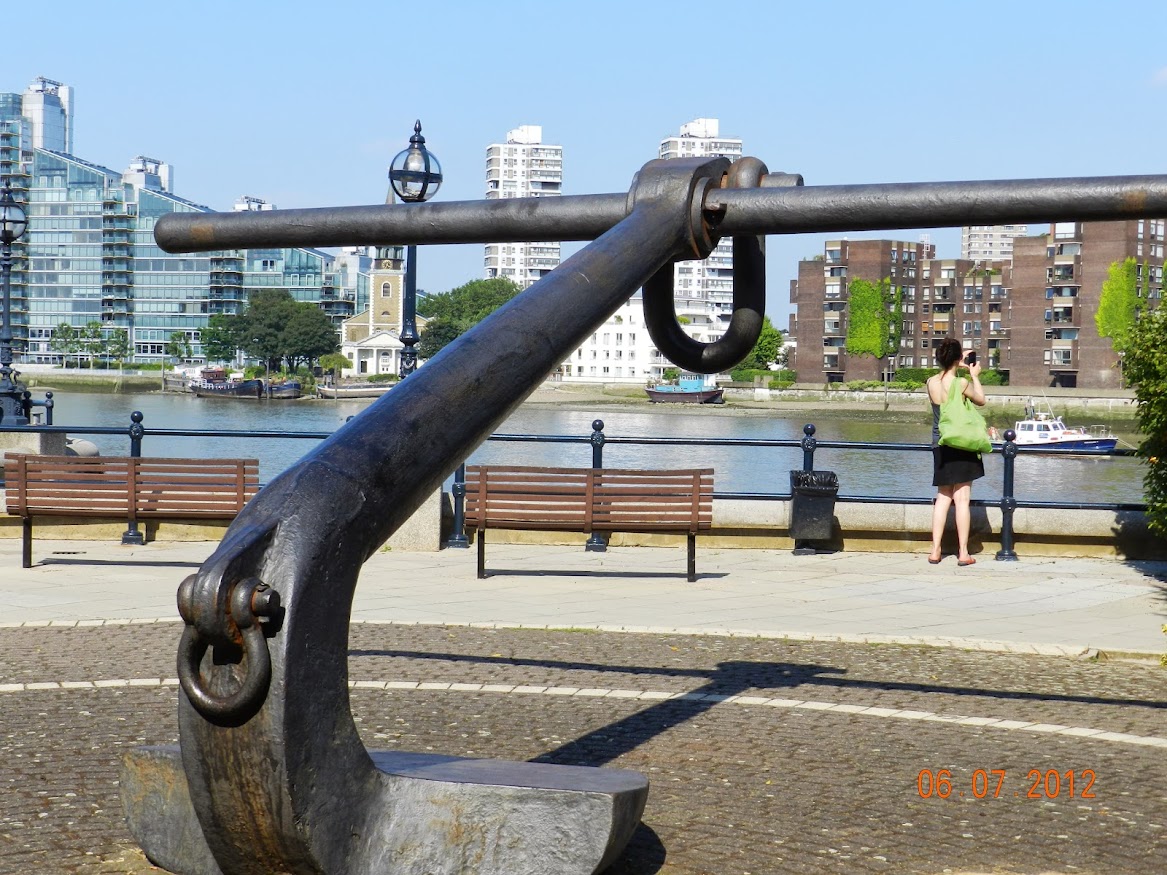 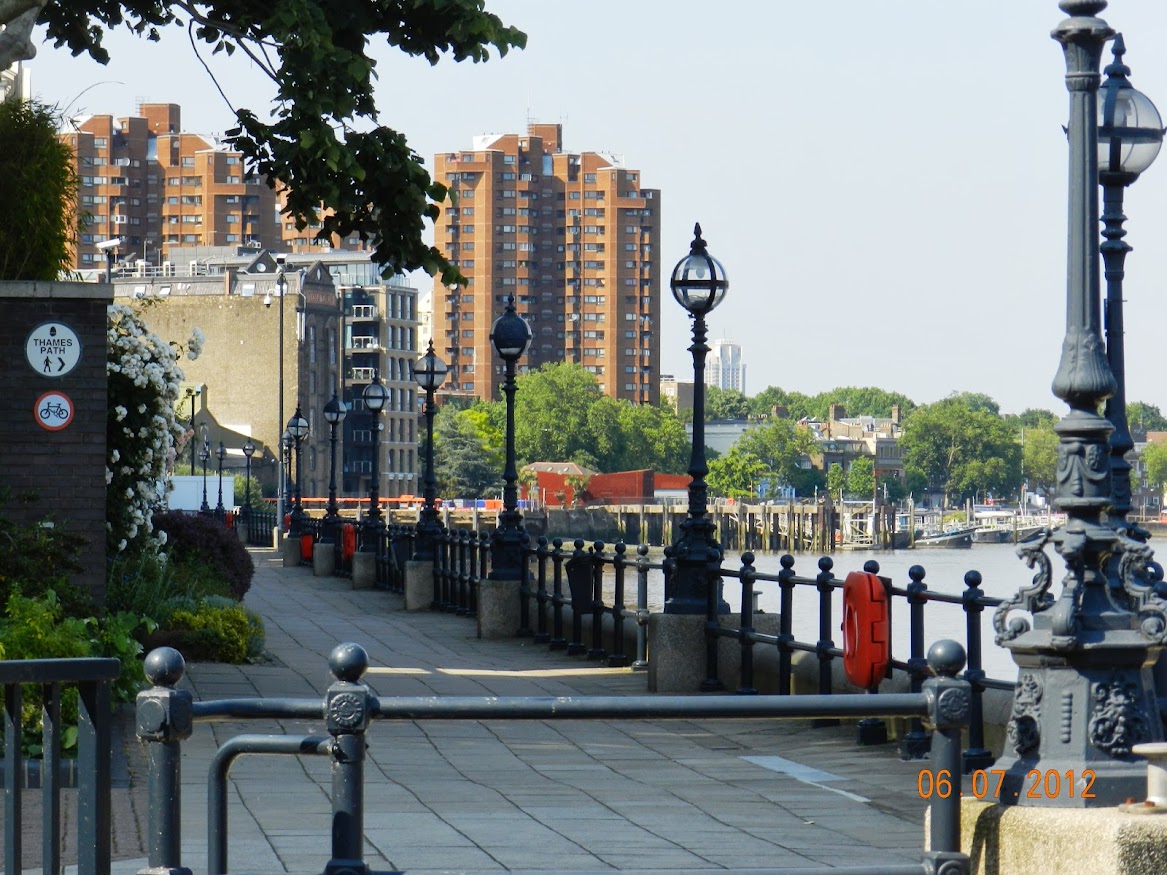 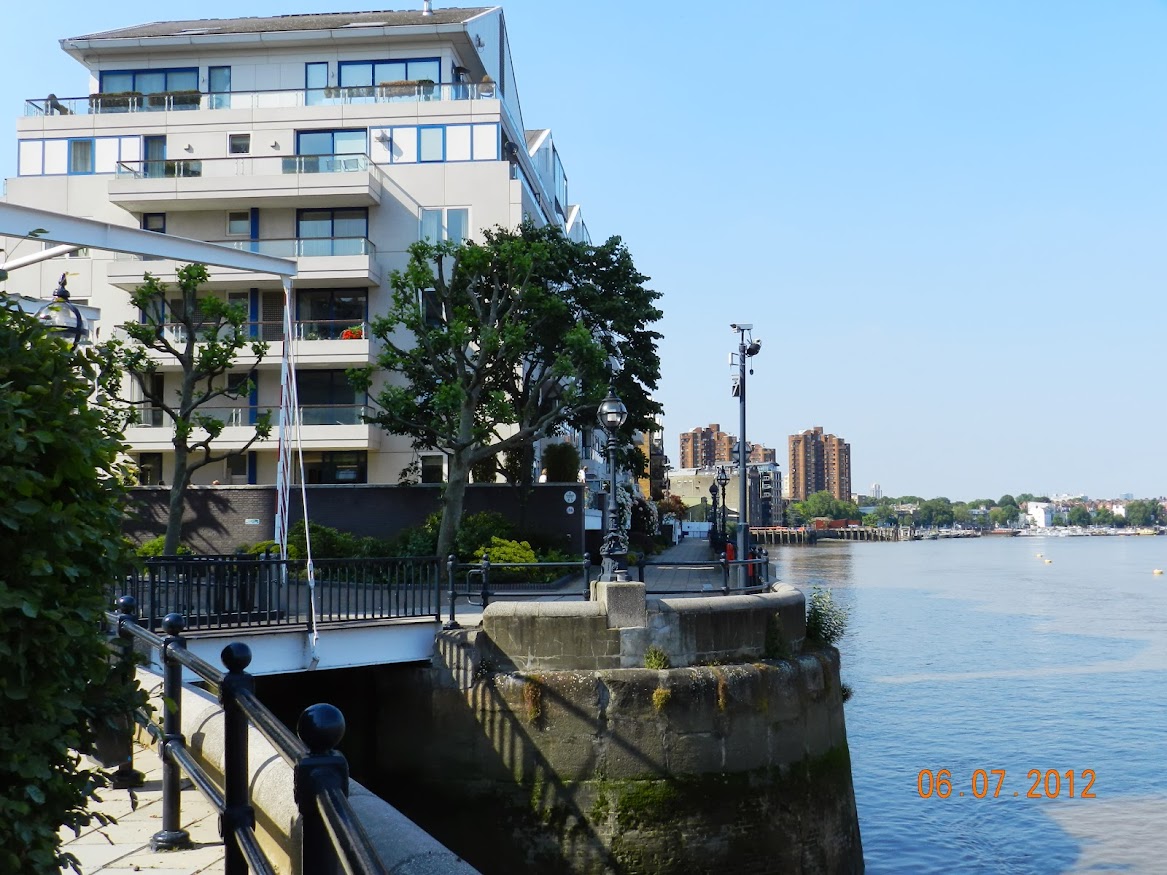 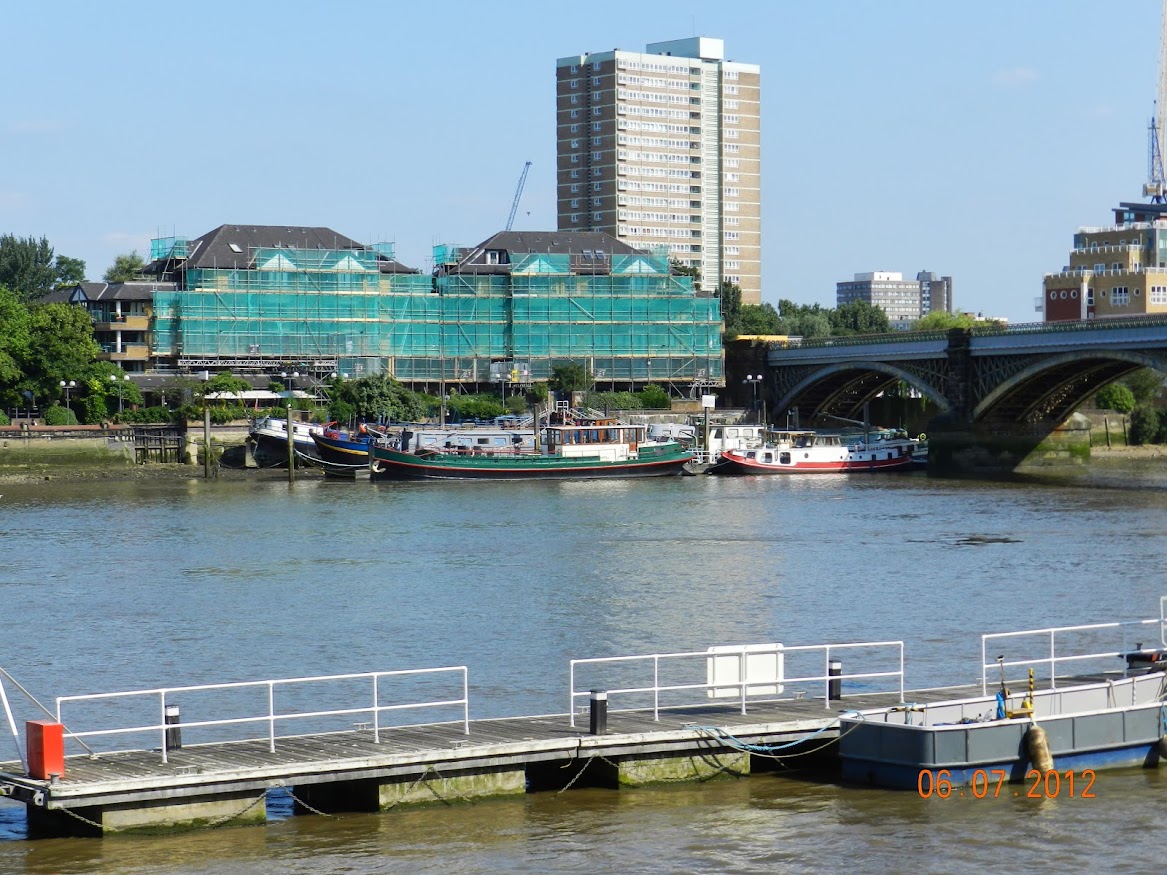 There are great views over the Thames: 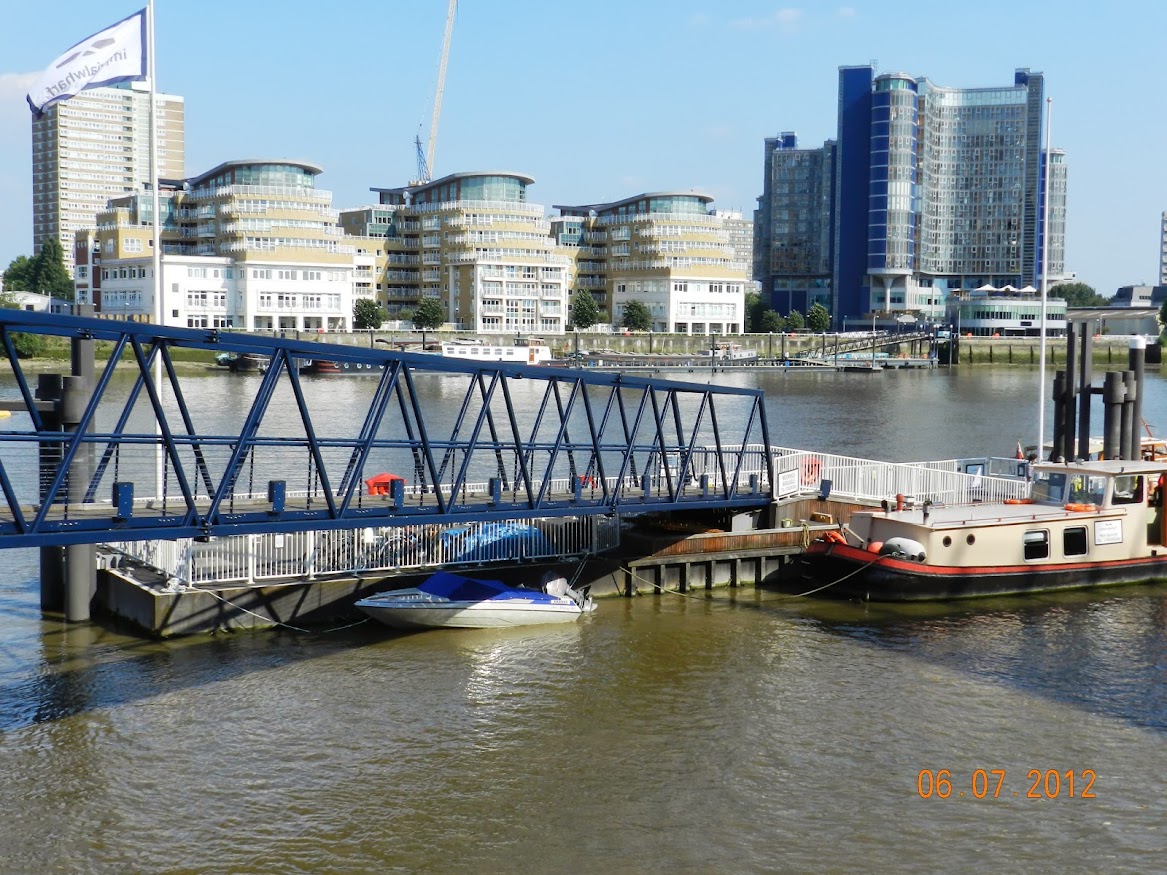 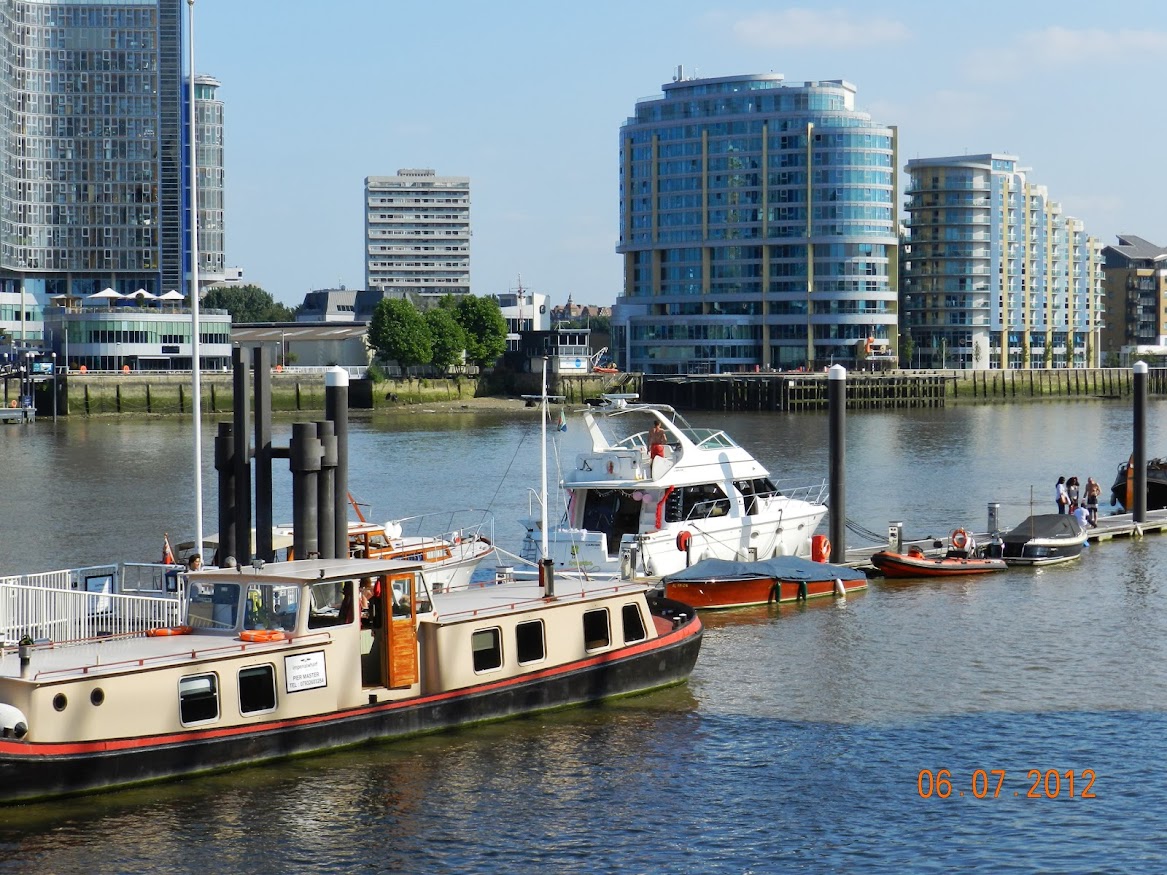 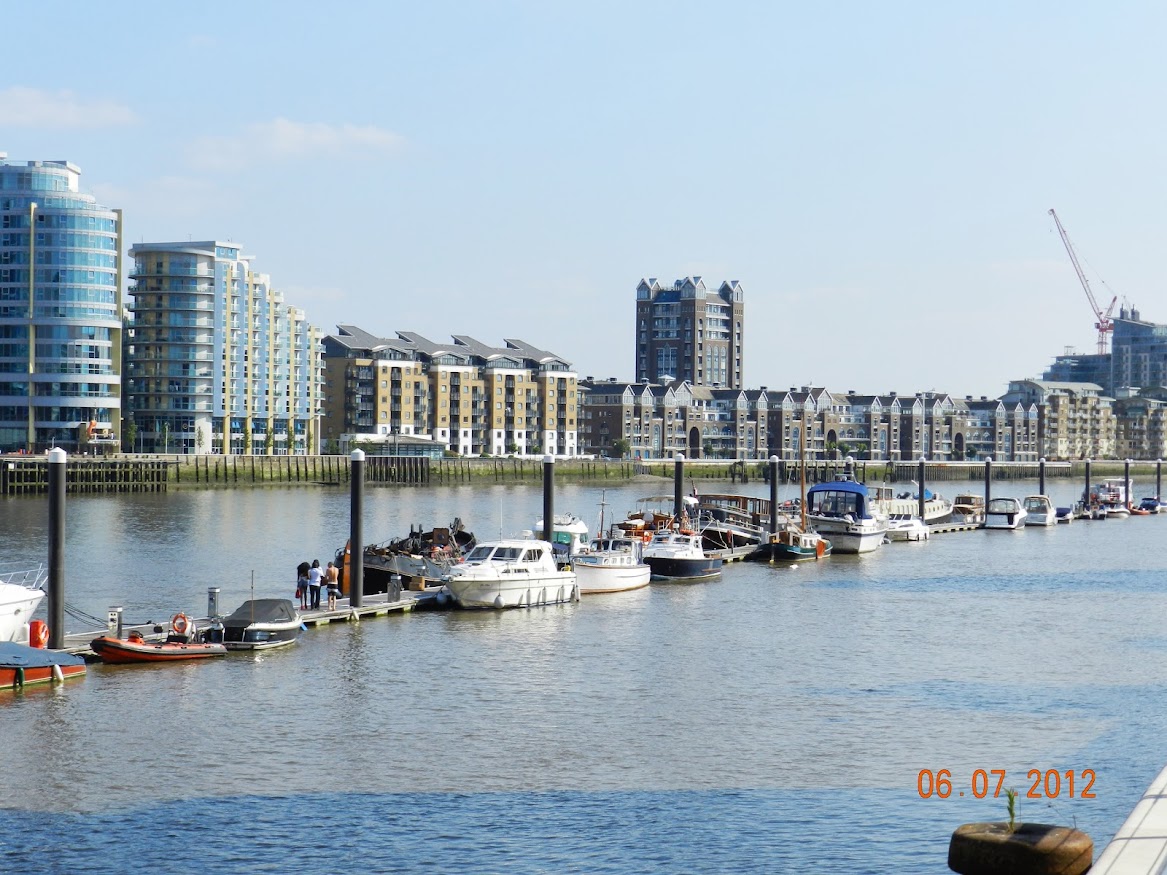 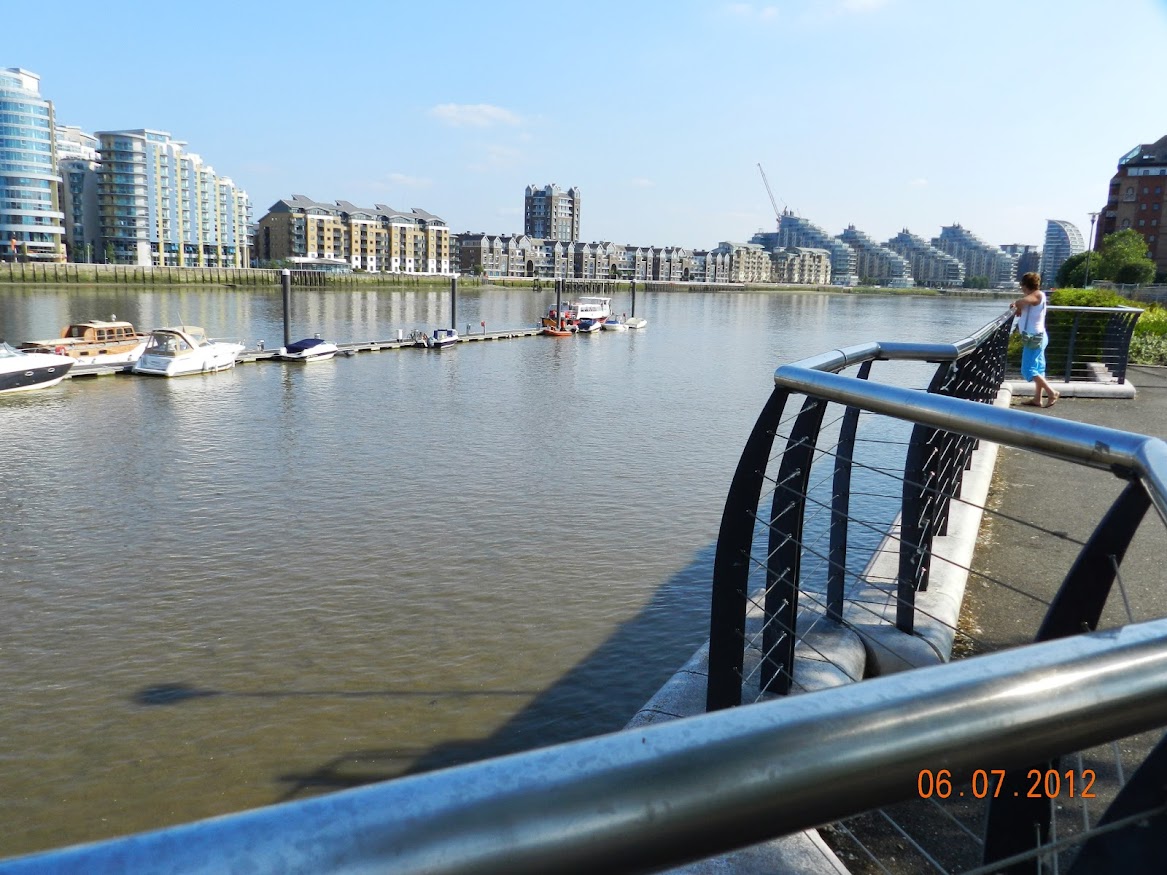 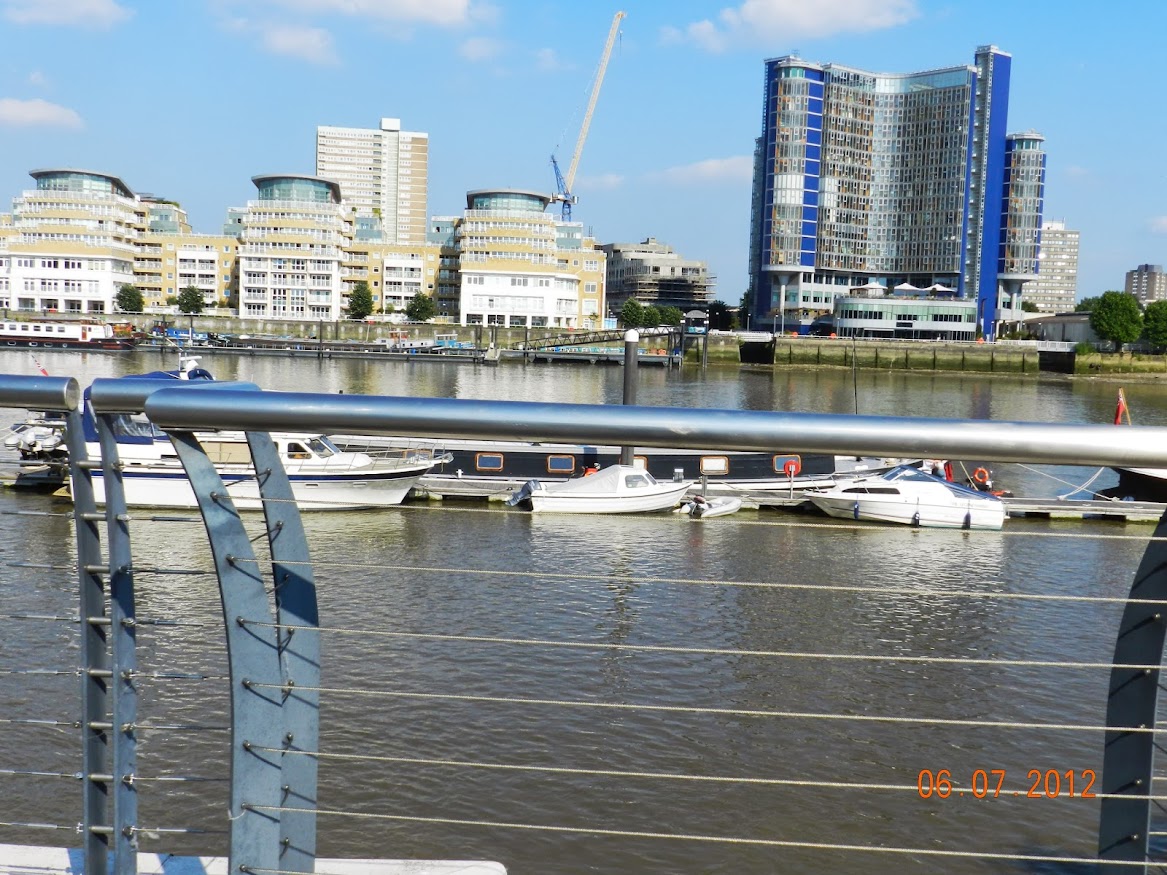 Battersea Bridge is adjacent to the Chelsea harbour pier: 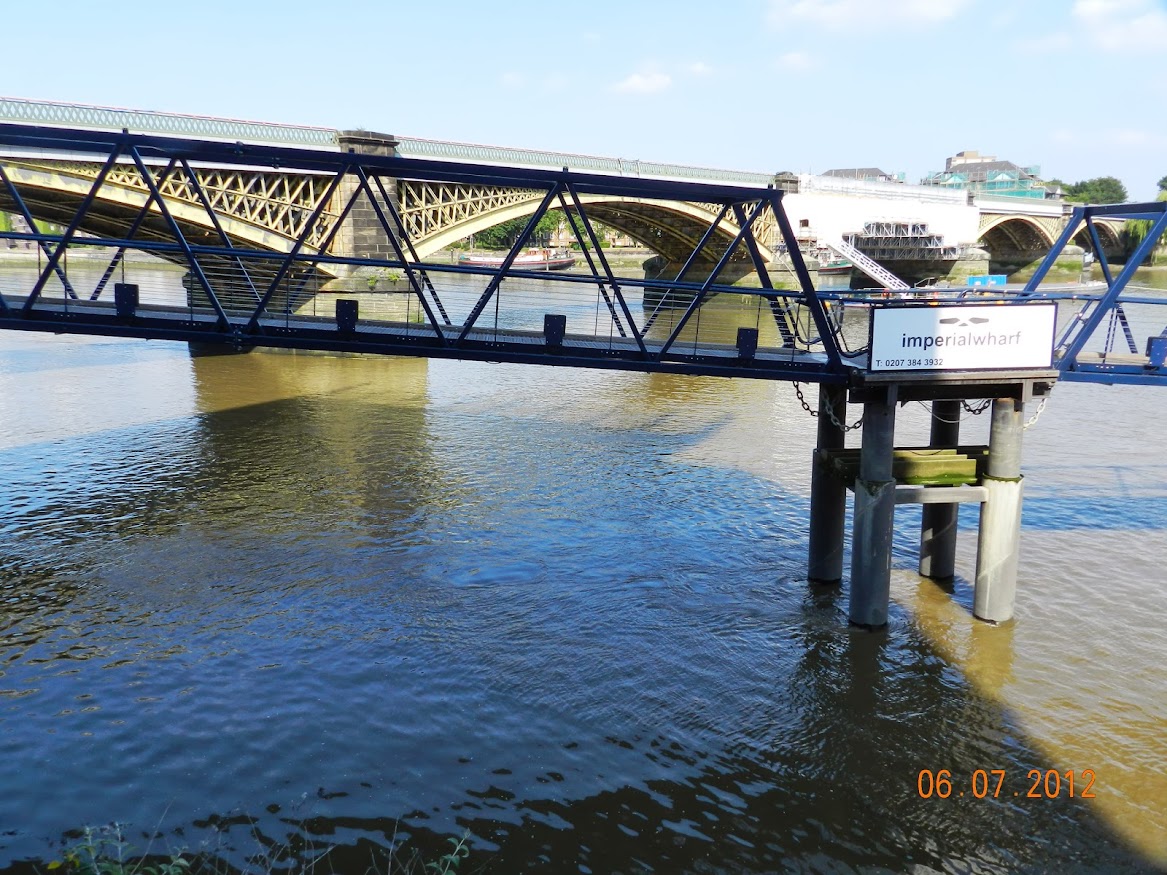 However there is something oddly sterile about the buildings, which all look like they are all flat-packed: 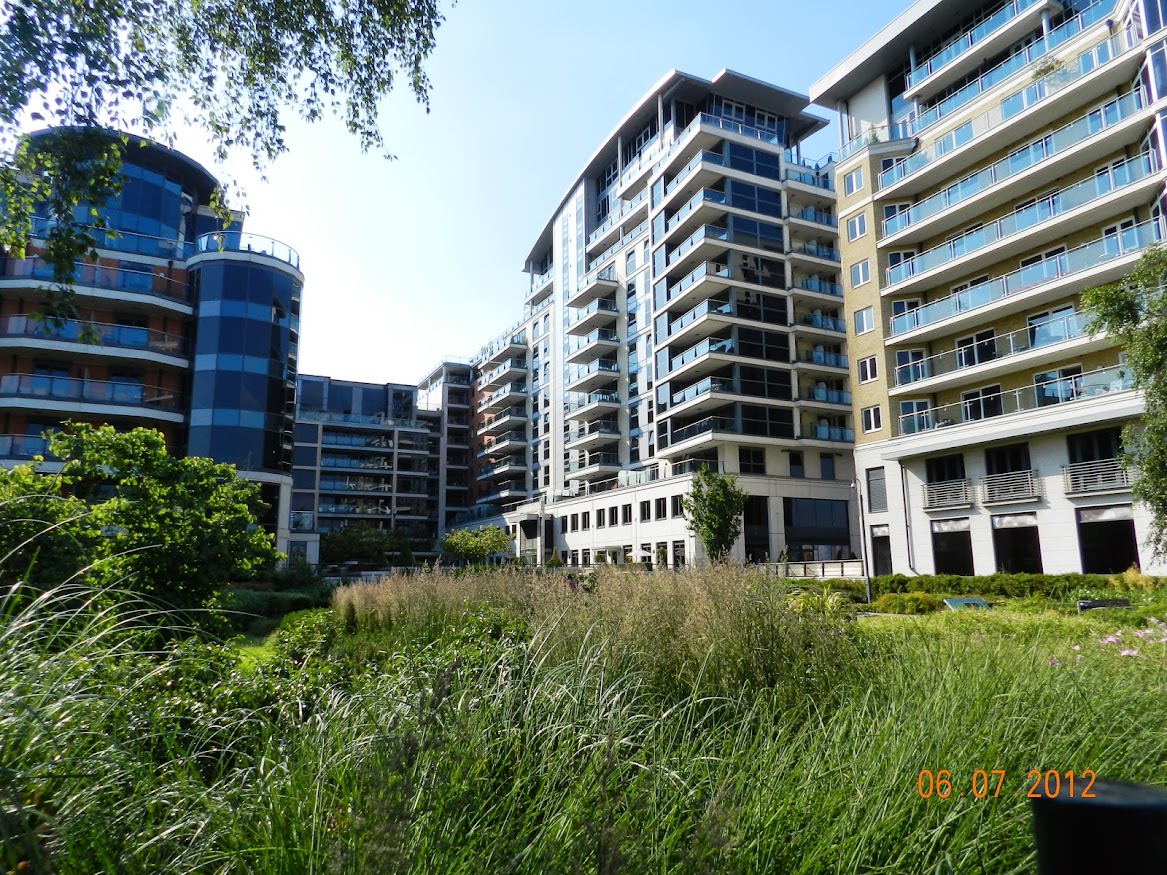 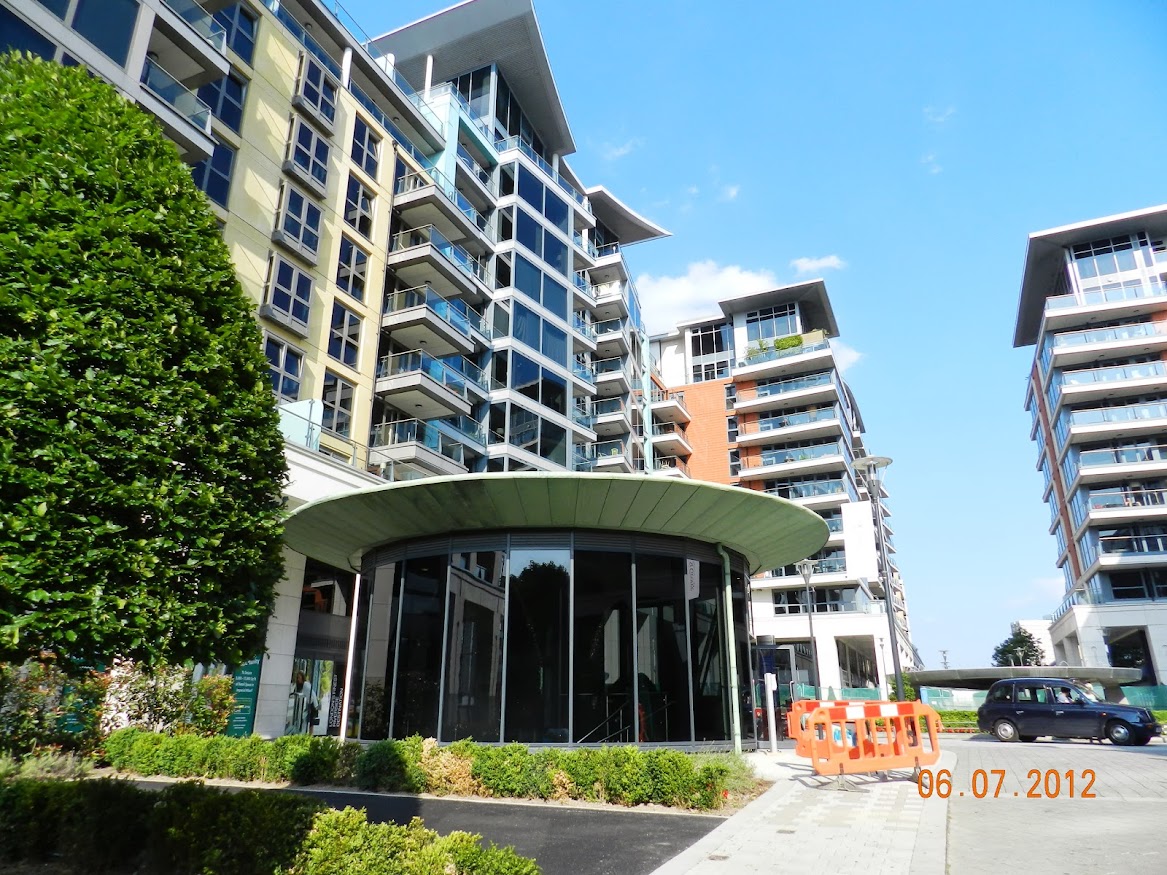 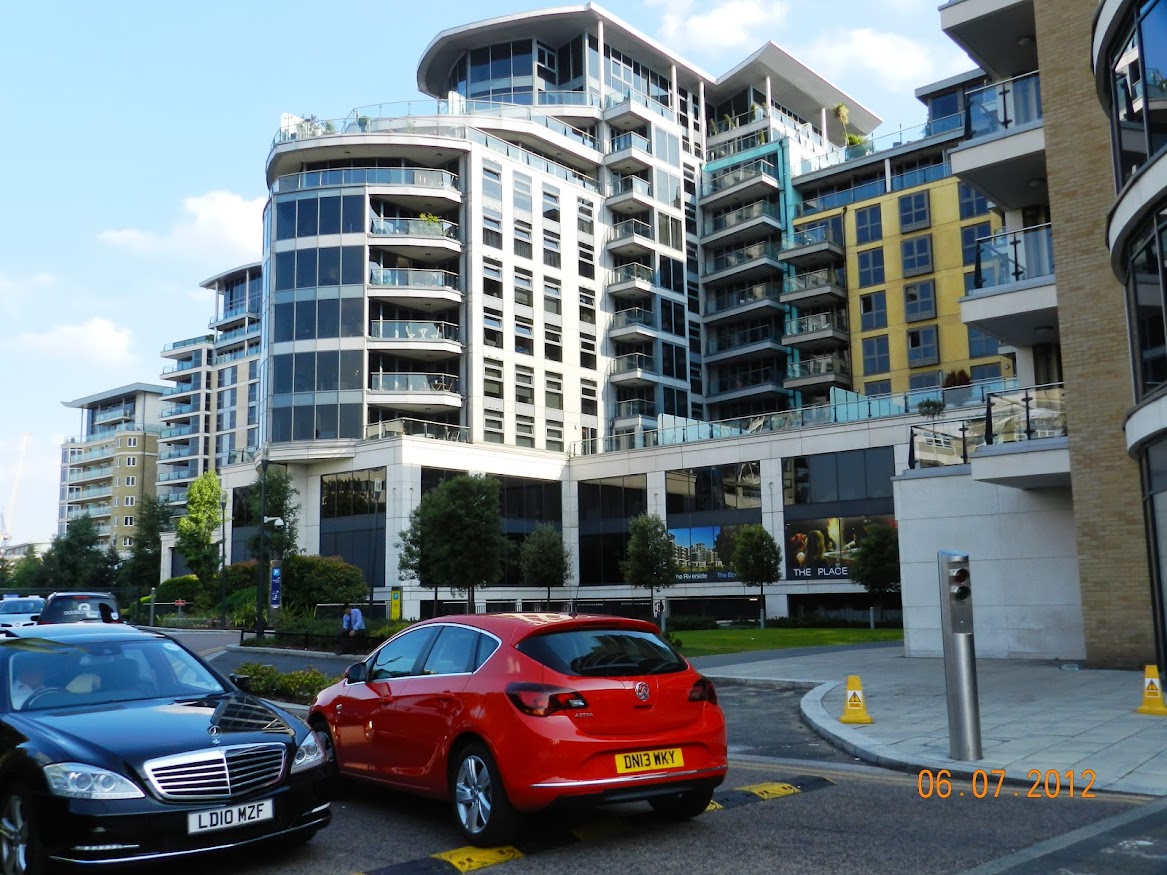 The Imperial Wharf Parkland or Sensory Gardens are designed to stimulate the three senses. Divided into three uniquely planned spaces and dedicated to the senses of Aroma, Sight and Touch. The Sensory Garden is one of the best gardens I've seen in the UK: full with discipline, talent and quality. 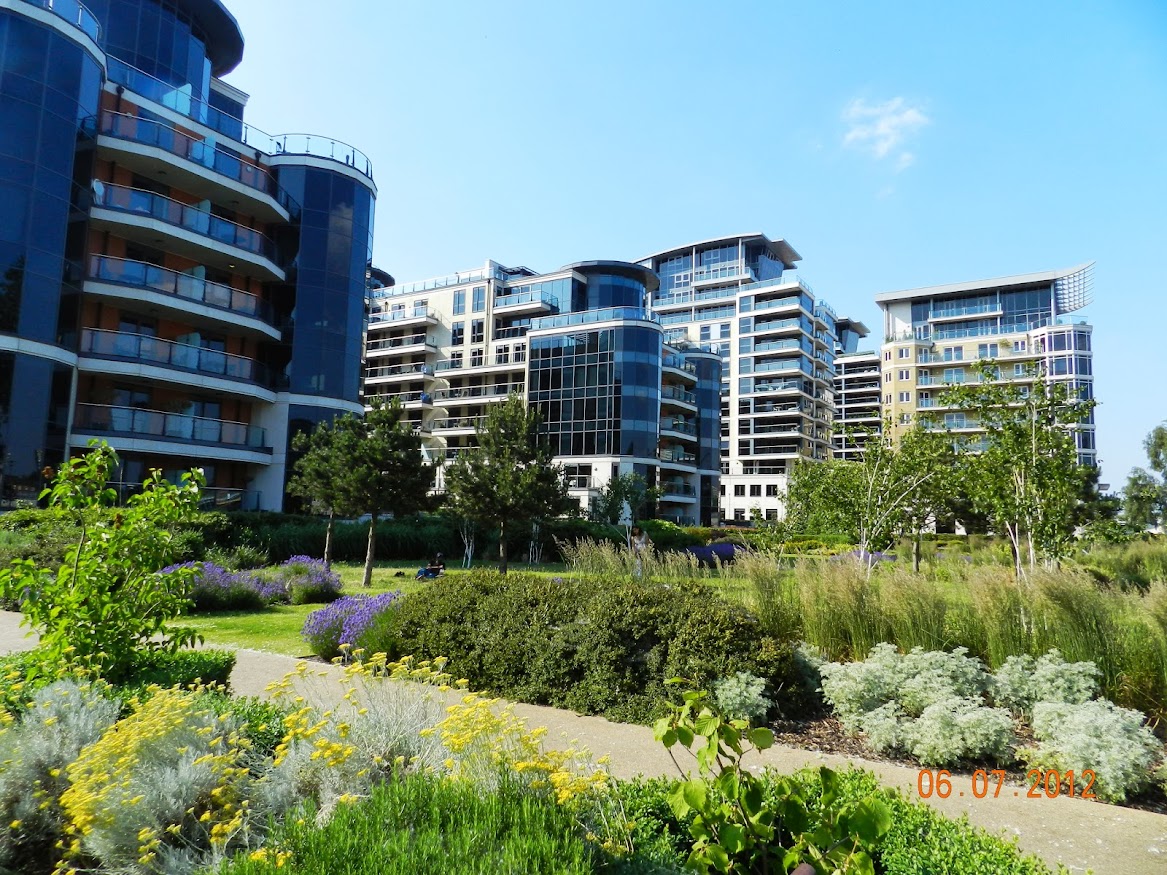