Paris - A morning in Montmartre :

Introduction: Montmartre means climbing in steep sloping roads. During the hot season - PLEASE reserve this quarter for the morning or late afternoon hours.

Our daily itinerary: We start with an "half loop" of Avenue Junot. We head, first to Dalida bust (Buste de Dalida) in Place Dalida, Montmartre. You get out from the Métro station and face Place Pecqueur. Head south on Place Constantin Pecqueur toward Rue Lucien Gaulard, 70 m. Turn right to stay on Place Constantin Pecqueur, 15 m. Turn left onto Rue Girardon. Take the stairs, 65 and you face Place Dalida and Bust of Dalida.  Dalida (her real name: Yolanda Gigliotti) (1933-1987) was a legendary Italian/Arab singer who gained a huge popularity in France during the sixties and seventies. She sang, mainly, in French and Arabic but, recorded songs in 10 languages. The most famous French female singer is almost unknown out of the French-speaking countries. Dalida's Parisian home was in Montmartre. She died aged 54 during the night of 2 to 3 May 1987 committing suicide. She is buried in the Cimetière de Montmartre. After her death the city named this square after her and installed this bust of her here. The bust is bronze and natural sized and was sculpted by the French artist Aslan. Many local and foreign fans  pay tribute to Dalida. The square is idyllic and surrounded by houses with nice courtyards: 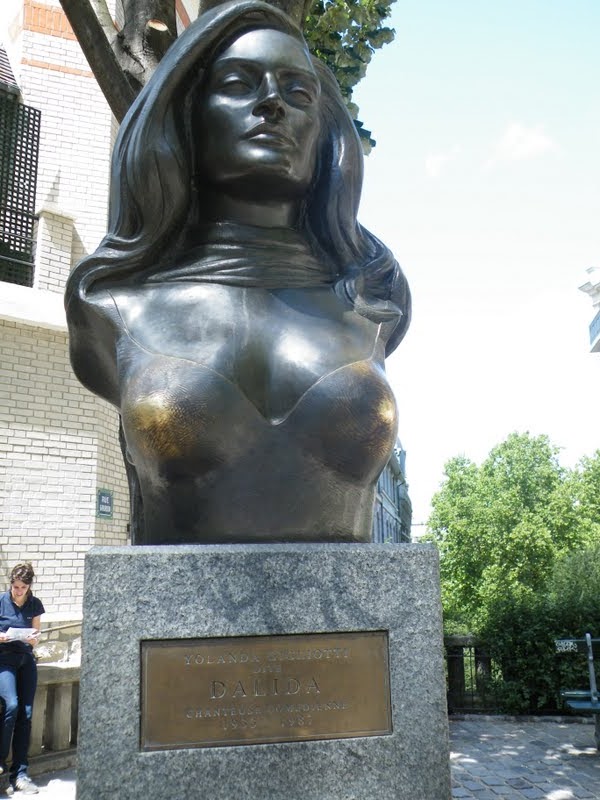 From Place Dalida we head WEST to Rue Simon Dereure. We walk 110 m. along this road to meet the steep climbing Avenue Junot (tree-lined, so it is quite shady...). Turn LEFT (south) to Avenue Junot and climb 30 m. to see Cafe Marcel on your right. On this side starts a pretty ally, Villa Léandre, with English-style cottages and mansions:

We continue with our loop of Avenue Junot. Continue walking south-east (now,down) along this tree-lined, aristocratic avenue.  40 m. south-east from the intersection of Avenue Junot x Villa Léandre - we see, on our right the Maison de Tristan Tzara, 15 Avenue Junot. This modern house, which is closed to the public, was built in 1926 for the poet and writer Tristan Tzara, founding father of Dadaism, by the Austrian architect Adolf Loos. It's very simple and minimalistic. It is decorated with samples of African art:

Head southeast on Avenue Junot toward Hameau des artistes, 140 m.  You may see, on your right, the windmill of Le Moulin Radet (see Tipter blog "Paris - 9th arrondissement and Montmartre"). 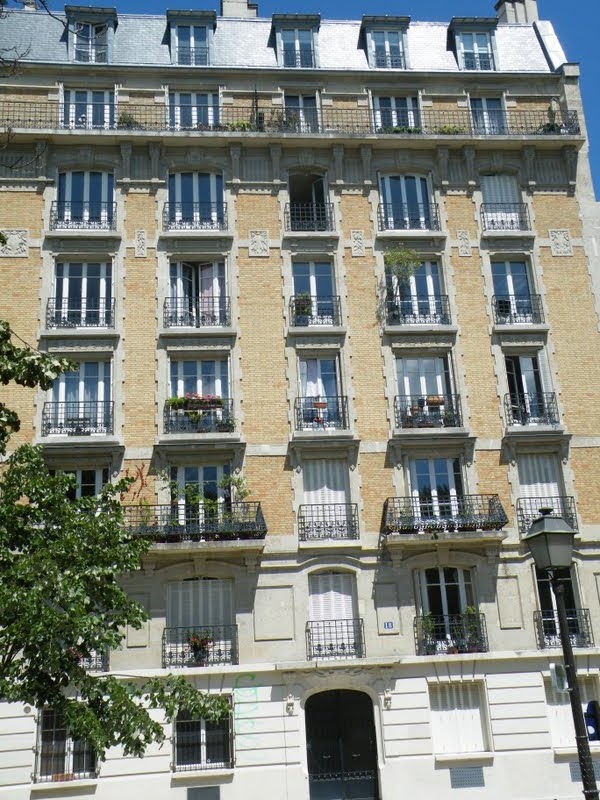 Turn right onto Rue Lepic, 80 m. At the intersection of r. Girardon and R. Lepic - is the best sight of the Moulin Radet windmill. This section of Rue Lepic, we climbed up in the former blog. Turn left onto Rue Tholozé. Take the stairs, 95 m. Turn left onto Rue Durantin. It is one of the few streets of the hill Montmartre that does not climb ! At #22 note the shop of restoration of musical instruments. At #40 try to get a glimpse inside the buildings - an amazing courtyard on two levels:

From the fabolous courtyard of 40 Rue Durantin - we continue walking southeast on Rue Durantin toward Rue Tholozé, 140 m. Continue onto Rue Garreau, 90 m. Turn left onto Rue Ravignan and we face, 60 m. further the charming Place Émile-Goudeau on our right. Metro: Anvers (line 2) Abbesses (line 12) or Lamarck-Caulaincourt (lines 4, 12). Place Emile Goudeau is a charming, picturesque square shaded by horse chestnut trees. The Wallace fountain refreshes the many visitors who flock to this romantic square. It pays homage to the poet, journalist, novelist and singer Emile Goudeau (1849- 1906) founder of the literary club of Hydropathes (of who the water makes sick).

At #13. the Bateau-Lavoir ("The Boat Wash-house") was rebuilt on the site of the former house destroyed by a fire in May 1970. The building was dark and dirty, almost seeming to be scrap pile rather than a dwelling. On stormy days, it swayed and creaked, reminding people of washing-boats on the Seine River, hence the name. It is very famous as the residence and meeting place for a group of outstanding late 19th and early 20th-century artists. Kees van Dongen and Pablo Picasso took up residence between 1900 and 1904. After 1904 more artists and writers moved in, including Otto van Rees, Amedeo Modigliani, Pierre Mac Orlan, Juan Gris, André Salmon, Pablo Gargallo, Max Jacob and Pierre Reverdy. While residing at the Bateau-Lavoir Picasso painted works such as Garçon à la pipe (Boy with a Pipe) in 1905, and one of his most noted works, Les Demoiselles d'Avignon in 1907, considered by art historians as a proto-Cubist painting (the precursor of a movement that became known as Cubism). Following the outbreak of World War I in 1914, creative artists living at the Bateau-Lavoir and in the neighborhood began moving elsewhere, mainly to Montparnasse:

After leaving the station you have to deal with endless flights of stairs and it is complicated (no signage) to find your way to the Sacre Coeur. Your best bet is taking the Funiculaire (might be very crowded). This is the closest metro to access the Funiculaire de Montmartre which takes you from the bottom of the hill to the Sacre Coeur. Anyway, take photo of the Art-Nouveau metro station:

Le Saint Jean de Montmartre Art-Nouveau church stands in the west side of Place des Abbesses. FREE. Get serenity in this lovely church without the herds of tourists. Almost empty. Guided tours of the church on every fourth Sunday of the month at 16.00. Built from 1894 through 1904, it was designed by architect Anatole de Baudot and Henri Labrouste. Brick and ceramic tile-faced facade. The locals call this church: "Notre-Dame des Briques". Beautiful Art Nouveau stained- glass windows executed by Jac Galland according to the design of Pascal Blanchard. Interior sculpture was by Pierre Roche. It is an austere church without posh marbles, golden decorations and remarkable paintings.

This church, in the west side of the Place des Abbesses is in total contrast to the Le mur des je t'aime - in the east end of the square. Le mur des je t'aime or The I Love You Wall is a is a must-see for couples from all over the world visiting Paris. It is, actually, Jehan Rictus square within which is a small park displaying this wall.

A work of Frédéric Baron and Claire Kito. The wall, covering a surface area of 40m², is composed of 612 plates of the title "I love you" in 250 languages. The splashes of red on several plates represent cases of a broken heart, symbolizing the human race which has been torn apart and which the wall tries to bring back together. Fantastic, moving, unusual monument, dedicated to love. Touching the wall with both hands, make a wish about a true love! Once-in-life experience. The place is packed with (young) visitors. Quite difficult to get a clear picture of the WHOLE wall:

Turn left onto Rue la Vieuville, 120 m. Turn left to stay on Rue la Vieuville, 30 m. Continue onto Rue Drevet (a narrow lane of old stairs of the Three Brothers and the old rue du Poirier). Take the stairs, 90 m. Turn left onto Rue Gabrielle, 150 m. A quaint and atmospheric small road. Turn right onto Place Jean-Baptiste Clément, 55 m. This path/square bears the name of Jean Baptiste Clément (1836-1903), author of the song Le "Temps des cerises". Turn right to stay on Place Jean-Baptiste Clément, 70 m. Rue Norvins start on your right. Take the steps down the rue Norvins to where it intersects rue des Saules. Follow this road downhill and you will begin to enter the most interesting streets of historic Montmarte filled with narrow cobblestone streets and sometimes beautiful private gardens.

Now you realize why this was truly considered a village once, set outside the city limits. At that time it was covered with vineyards and gypsum quarries and was a real working class neighborhood to which the artists came for cheap rent and tax free wine. Head east on Rue Norvins toward Place Jean-Baptiste Clément, 30 m. Turn LEFT (north) onto Rue des Saules, 95 m. Turn left onto Rue de l'Abreuvoir, walk 55 m. north-west and if you would like to see Renoir's house it's at # 6 Rue de l'Abreuvoir which is also lined with other houses some very fortunate Parisians get to live in.

RETURN to Rue des Saules and continue descending northward until the next intersection with rue Saint-Vincent.

Here, at #22 rue des Saules - stand Au Lapin Agile Cabaret. Au Lapin Agile Cabaret ("The agile rabbit") is a legendary cabaret, once frequented by the likes of Pablo Picasso, Maurice Utrillo, and Toulouse-Lautrec (all of whom have paintings hanging inside). The cabaret has been churning out live entertainment since the turn of the twentieth century, keeping the artistic heritage of Montmartre  alive and, for ever. Live performances - every night at 21.30. The cabaret currently charges an entry fee of €24 per person, which includes a glass of the cherry house wine. Pure French chansons oldies. Crowded. For French-speaking or French-loving elders: