With our back to the Radcliffe Camera and our face to the St. Mary Church we walk southward from Radcliffe Square - heading to the High Street. There, we turn LEFT (EAST) and the rest of our second day in Oxford is devoted to the High Street section between St. Mary Church and Magdalen Bridge. Our direction of walk is from west to east. A small section of 700 m. of High Street - but full with colleges, green areas, water and... history. The real retreat for hungry stomachs lie in the eastern end of High Street - where it diverges into St. Clement Street and Cowley Road: full with budget and quality restaurants and cafe's. In part 1 we recommended on 2 restaurants: Greyhound and Nando's - located, respectively, in these two roads. Geographically, this area of eateries lies in THE END of our route. Another good option: dine at the Queen's Lane Coffe House. They have Grills Menu, traditional British hot portions.

Usually, closed to the public. You can appoint a visit through the local tourist information office. FREE. The College Chapel holds a number of public services, and during term there are frequent public concerts and recitals - these are your opportunities to sample this wonderful classic-style college. They have regular recitals on Wednesdays during term time. There's an excellent college choir as well. Choral Evensong at 18.15 on Wednesdays, Fridays and Sundays.  This college is unique: unlike its Gothic-style neighbours, Queen's is a stunning example of classical architecture. The Chapel is magnificent and has one of the finest organs in Oxford.

The Upper Library at Queens College: 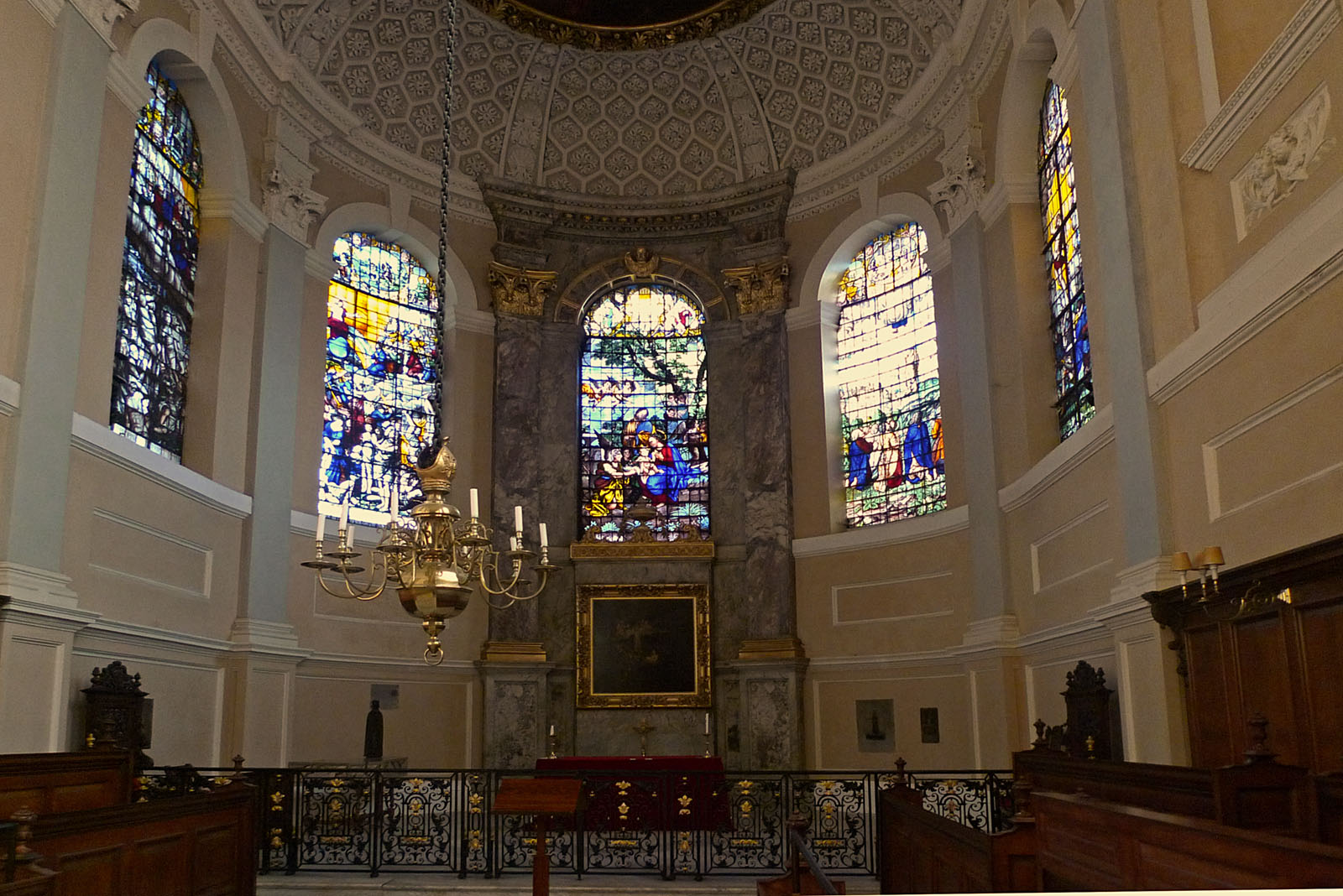 Opposite, at the east side of Queen's Lane is the entrance to St.Edmund Hall: 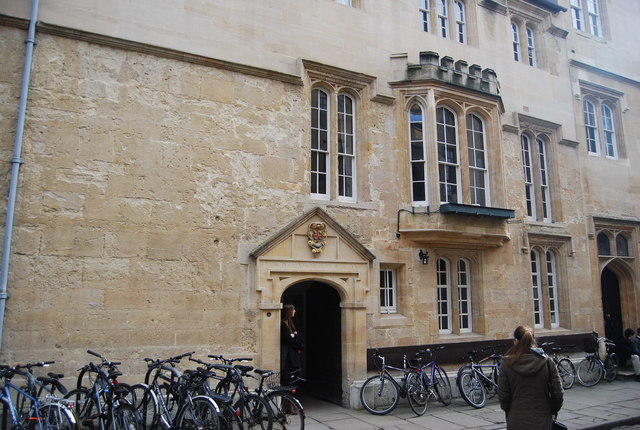 St Edmund Hall (commonly referred to as of "Teddy Hall"). Its estimated date of founding is year 1236. The college claims to be "the oldest academical society for the education of undergraduates in any university". The college has a reputation for being a informal, young, vibrant, friendly college with a wide range of extra-curricular strengths in areas such as creative writing, drama, sport and music. The main building of "Teddy Hall" is the only medieval academic Hall to still be called such (instead of 'college'). Teddy Hall got college status in 1957.
Open: Daily, 10.00 - 16.00. FREE. Wheelchair friendly:

We return back south to High Street. In the corner of Queen's Lane and High Street - stands the Queen's Lane Coffee House. It changed its name to QL several years ago. Try their Custard Tarts, waffles and their teas. Good portion sizes for good value for money. Claims to be the oldest coffee house in world. Established at 1654. 362 years of history.... Avoid during the busy hours: 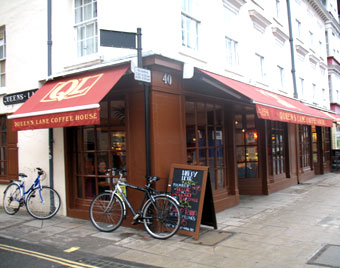 300 m. further east, still on the north side of High Street stands the Magdalen College (pronounced "Maudlin"). The college is absolutely stunning. Opposite the college entrance, on the south side, is the Botanical Garden - our last destination of this route (see below).Please allow 2-3 hours for visiting the Magdalen College. A very big place. You cannot imagine the size from outside. The principal areas of the College that are normally open are the Hall, Chapel and Old Kitchen Bar. In addition the gardens, grounds and parkland, including the water walks beside the River Cherwell are open. The Deer Park can be viewed from the path. Open: January to late June: 13.00 to dusk or 18.00, Late June to the end of September: 12.00 - 19.00, October to December: 13.00  to dusk or 18.00. Prices: Adults £5.00; Over 60s, children, students £4.00; Family ticket (2 adults and up to 3 children aged 7 or over) £14.00. Children under 7 years of age are free of charge.

Entrance to the college is through an inconspicuous porter's lodge on the High Street, which leads into the irregularly-shaped St. John's Quadrangle.

Founded in 1448, Magdalen College has some of the most beautiful buildings in Oxford, many of which are adorned with an array of interesting stone-carved characters. Beautifully located just off the river, the college is set in extensive grounds (most of which can be accessed by the public) and has a variety of buildings in different architectural styles. The college is situated amid superbly maintained woodlands, riverside walks, gardens and amazing Deer Park. BE PREPARED TO STAY, HERE, AT LEAST TWO HOURS. History meets natural beauty and it really just has to be seen to be believed! After enjoying the amazing architecture take a walk along the Cherwell river and its surroundings. Be ready to walk through long paths and around huge meadows. So close to city centre and you feel like being in the countryside in the middle of nowhere! So, better, dine beforehand !

Magdalen College was founded in 1458 by William Waynflete, a high-ranking churchman who went on to become Bishop of Winchester and Chancellor of England. Construction began only in 1467, when the charter was confirmed by King Edward IV. Magdalen was at the forefront of the revival of Classical learning from its early days and in the early 17th century it was strongly Puritan for a time. Nevertheless, it supported Charles I and the Royalists.

Most of the College's quadrangles are full of quirky statues. On the right/east is the great west window of the chapel (1480); on the left/west is a gate leading to St. Swithun's Quadrangle (by Bodley and Garner 1881-85) and the early 17th-century Grammar Hall.

The High Street side of St. Swithun's Quad:

Straight ahead (north) is the attractive, neo-Tudor President's Lodgings (1881-85). In the southeast corner of St. John's Quad is an outdoor pulpit, from which a university sermon is preached on the Sunday nearest St. John the Baptist's Day (June 24). The small Chaplain's Quad runs from here past the chapel and hall to the Great Tower:

sculpture of St Mary Magdalene on the gate leading into St John's Quad:

Magdalen's Perpendicular Gothic Great Tower (1492) is perhaps the most beautiful in Oxford. Magdalen's bell tower, the tallest medieval tower in Oxford, was constructed in 1492, six years after Waynflete's death. The resulting ensemble was as impressive then as it is today; King James I (r.1603-25) pronounced Magdalen College "the most absolute building in Oxford.". Bring binoculars or a zoom lens to see the amusing stone characters that decorate the top of the tower. All are modern and many are clearly caricatures of real persons: The beautiful chapel (1474-80) has the traditional Oxford T-plan, with just a chancel (or choir) and an ante-chapel. It has been much changed since it was first built; the present interior mainly reflects the restoration by L.N. Cottingham in 1830-35:

Hanging over the entrance, DO NOT MISS the near contemporary copy of Leonardo de Vinci's 'The Last Supper' (c.1510-14), on loan from the Royal Academy. Its rich coloring provides a good sense of what the faded masterpiece in Milan originally looked like:

The chapel's chancel has five bays with projecting buttresses surmounted by pinnacles and a finely carved parapet string. The stained glass is Victorian, placed here at the expense of the Earl of Selborne, once a Fellow and later Lord Chancellor. As throughout much of England, the original glass was destroyed during the Reformation and the Civil War. The grisaille glass in the ante-chapel is by Richard Greenbury (1632) and the west window is filled with a lovely 18th-century painted glass version of Michelangelo's Last Judgment, in gentle sepia tones. The College Choir gives worship performance every day of the week in Full Term (except Mondays) at 18.00, and every Sunday morning in Term at 11.00. On Saturdays, the men of the Choir are joined by female undergraduates from a number of Oxford colleges. Magdalen College Choir Hall. DO NOT MISS Evensong at Magdalen College: beautiful choral music in a beautiful setting, perfect acoustics.

In 1982 N P Mander Ltd were commissioned by the College to design and install a new organ, better suited to the high musical standards of the College's Chapel Choir and the architectural character of the historic building. The organ screen and choir stalls are by Cottingham (1830-35); the organ itself is by Noel Mander and the case by Julian Bicknell (1986). The sculptures on the altar screen (reredos) are all from 1864 by Earp. The altar painting of Christ Carrying the Cross is by the 17th-century Spanish artist Valdes Leal. The organ was completed in 1986 and is frequently used for BBC broadcasts:

A broad flight of stairs in the southeast corner of the Great Quad leads to the amazing Great Hall (not usually accessible to visitors), where a portrait of William Waynflete stares down upon the tables at which famous students - such as Cardinal Wolsey, Chancellor of England under King Henry VIII, the notorious Irish play writer and aesthete Oscar Wilde, and the Physicist Erwin Schrodinger - all tucked into their bacon and eggs. The Hall has early 16th-century linen fold paneling and a set of ornate early Renaissance carvings, five of which depict the life of Mary Magdalene:

The Old Library (no admittance to visitors), in the west range of the Great Quad is NOT open to visitors.

in 1474 work began on the Cloisters, with their Chapel, Hall and Library. These were largely finished by 1480. The lovely cloister of the Great Quad (1474-80) with its stone creatures is one of the best in the UK:

Now, another wonderful bonus is waiting for us: go for a nice walk around the meadow behind the college. Magdalen's famous Deer Park, also known as Magdalen Grove. Magdalen's extensive grounds include one of the best walks in Oxford, Addison's Walk. It is named after the great essayist Joseph Addison, who was a Fellow of Magdalen for 22 years, and takes about 30 minutes to walk its mile-long circuit. Very enjoyable wander around these beautiful surroundings. The path passes along the River Cherwell, meets huge old trees, and follows the edge of a great meadow. The meadows are wonderful, during the spring, when the Fritillarias are in bloom. You will see, along the path, rowers taking their first go on the Cherwell river from the adjoining hire point. This walk was a favorite of C.S. Lewis when he was a professor here. About halfway around the meadow is a plaque inscribed with a poem written by Lewis. In the end of the circular path waits, for you, the College bar, open to the public, serving decent food at a very good price, if you want to grab a drink or something to eat. It is a lovely spot to sit outside by the river on a sunny day.

The Magdalen College Tower from the Botanic Garden: