From Carfax Tower, Queen Street - we head west on Queen St toward New Inn Hall St, 120 m. We turn right onto New Inn Hall St., 250 m. Turn right onto George St, 30 m. Turn left onto Gloucester St., 70 m. Slight left onto Gloucester Green, 150 m. Turn right onto Worcester St. walk 45 m. and Worcester College will be on your left. Worcester College is one of the most charming of Oxford colleges, with a blend of ancient and modern: from medieval cottages to modern students' accommodation completed in the last decade. Worcester College premises include award-winning gardens, wooded grounds, a lake and sports fields. Worcester College is, actually, in the centre of Oxford on the junction of Worcester Street, Walton Street and Beaumont.  It is just across the road from the main bus station, and is a 15 minute walk from the railway station and 5-7 minute walk from the main shopping areas of Oxford Centre. Open: every day from 14.00 - 17.00 (except some public holidays and during the College's Christmas closure period). Free of charge. All visitors are asked to report to the Porters' Lodge, on the right just inside the main entrance. Occasionally the College may be closed for private functions. The college was founded in 1714 (young - compared to other Oxford colleges) by the benefaction of Sir Thomas Cookes, a Worcestershire baronet, with the college gaining its name from the county of Worcestershire. Its predecessor, Gloucester College, had been an institution of learning, college for Benedictine monks, founded in 1283 that had been dissolved (dissolution of the British monasteries) in 1539 by King Henry VIII. The buildings served as palace and then entered 150 years of decline. An endowment came to their rescue in 1714. Sir Thomas Cookes, a Worcestershire baronet, left the money for the founding of a college.

Looking down into the main quadrangle from the entrance through the main building, to the right is an imposing eighteenth century building in the neo-classical style:

To the left a row of medieval buildings known as "the cottages", which are among the oldest residential buildings in Oxford. These cottages are the most substantial surviving part of the former Gloucester College: Presently, Worcester College is near the centre of Oxford. But, it was on the edge of the city in the eighteenth century. This has proved a benefit in the long run, since it has allowed the college to retain very extensive gardens and sport/playing fields (including a lake). The gardens have won numerous awards, including the Oxford in Bloom college award every time they have been entered for the competition. Worcester College has more applicants per place than any other Oxford college !

A walking path out the back takes you along a waterway and there is a lake. The extensive gardens are open to the public - all free: The 18th century main building. Above the arcade is the Old Library; behind the arcade are the main entrance to the College (centre) and the entrances to the Chapel (left) and the Hall (right):

The Worcester College chapel holds regular services during term, many of which are sung by the home chapel choirs. Do not miss the dome and the mosaic floor of this fabulous chapel. Try to  attended a stirring Evensong program there one late afternoon on weekdays: 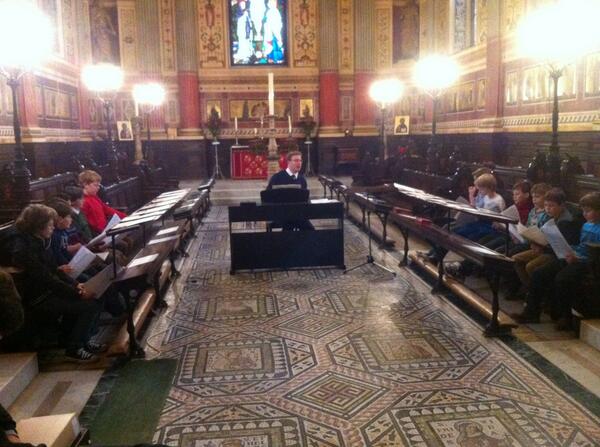 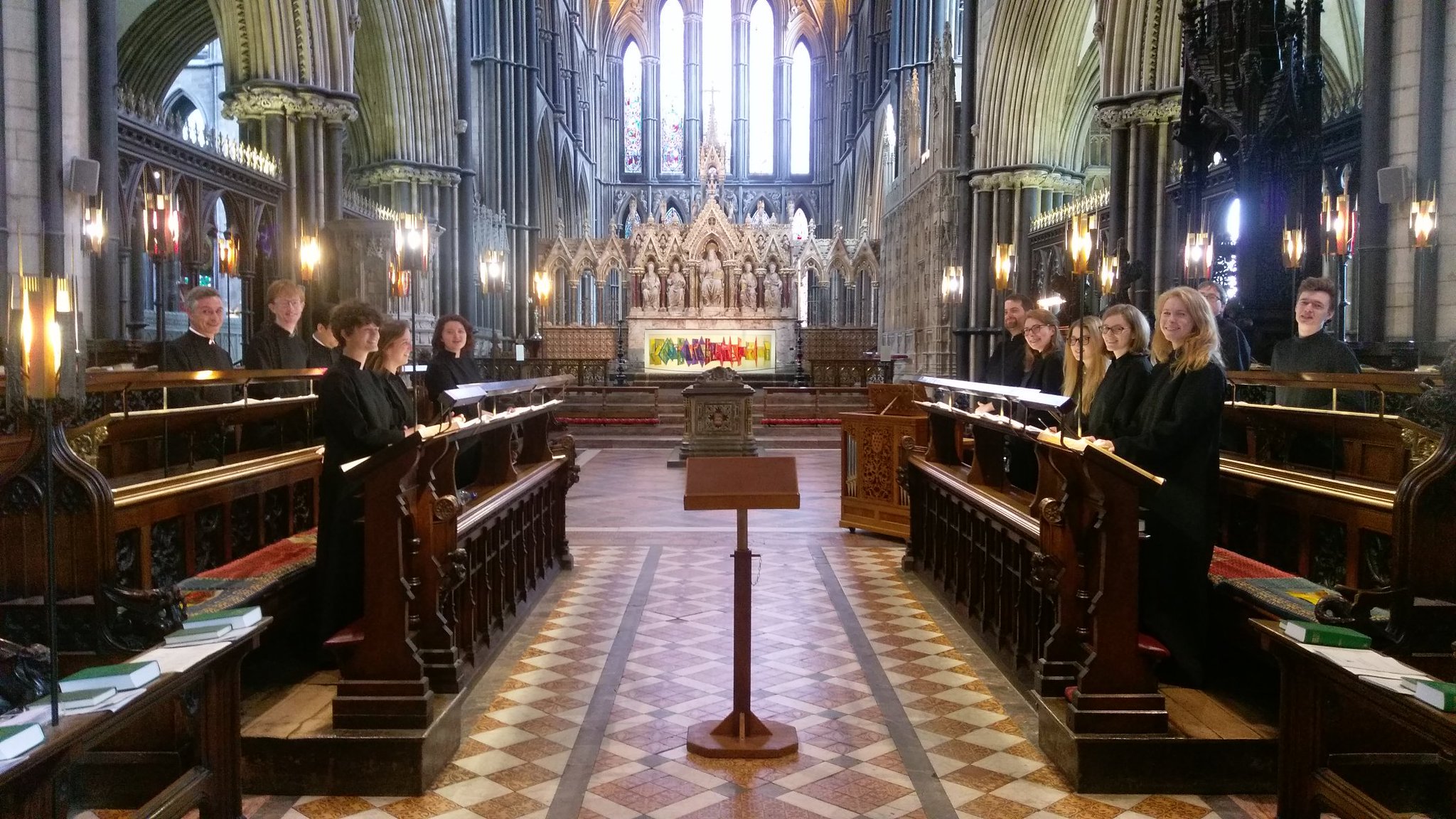 The Blavatnik School of Government in the south west corner of North Oxford, is standing opposite the slightly alarmingly Soviet-alike of the 1830 complex of Oxford University Press. It was opened in November 2015. Although the Blavatnik School of Government building is located in the Radcliffe Observatory Quarter (ROQ) on Woodstock Road, however its main entrance is on Walton Street. The building has been designed by internationally renowned Swiss architects Herzog & de Meuron. These architects were responsible for the conversion of the Bankside power plant to Tate Modern in London (year 2000). The Blavatnik School of Government is part of Oxford University’ - an academic institute of public policy and government around the world. The building is taller than Carfax Tower in the centre of Oxford, thus it had sparked disputes and caused opposition to the scheme by local residents in the Jericho district and all around Oxford. But, near its completion, in 2015, the building was described as "the latest striking building nearing completion in Oxford". In June 2016, the building received a national Award of the British Association of Architecture (RIBA). In July 2016, the building was shortlisted for the Stirling Prize for excellence in architecture.

The interior recalls the spiral staircase of New York’s Guggenheim Museum. The interior, grandiose space bright, airy with a lot of glass all around. With vast sheets of glass plates - you feel being into the street, with no frame between you and the Radcliffe Observatory Quarter: 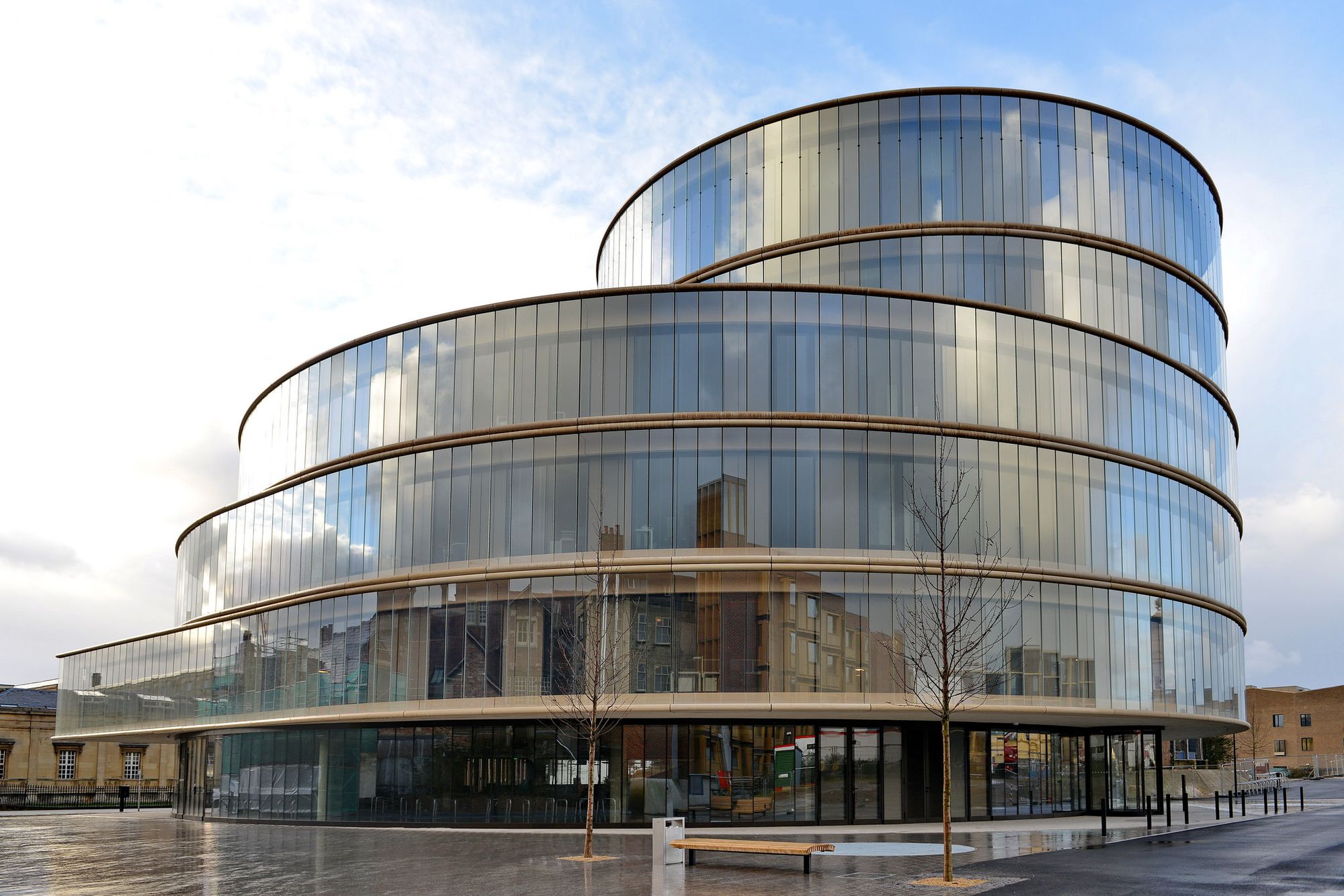 Opposite the Blavatnik School of Government (to the north-east) is the Radcliffe Observatory building - recently acquired by Green Templeton College. In 1772 building began on the Radcliffe Observatory, which was the astronomical observatory of the University of Oxford from 1773 to 1934, and is now in the grounds of Green Templeton College. Because of the viewing conditions, weather, urban development and light pollution at Oxford, the observatory moved to South Africa in 1939. It seems that this building is an ever intriguing source of inspiration to artists and continues to provide a truly unique host for the development of both academic and artistic projects in the Jericho and ROQ quarters. Beneath the Tower itself are rooms at each of three levels: the ground floor is now the College dining room, the first floor, originally the library, is now used as the Common Room, and on the top floor is the magnificent octagonal observing room. On the first floor there are also the Fellows' Room and the William Gibson Room, a small private dining room for up to 14 people.

Statue of Atlas on top of the observatory:

Nowadays, Green Templeton is formally Oxford’s newest College, founded in 2008. This college (graduates-only) is, actually, a merger of Green College (specializing in medicine, health and the social sciences) and Templeton College (in business and management):

The Andrew Wiles Mathematical Institute building was formally opened on 3rd October 2013 and is located, immediately, south to the Green Templeton College. A striking building. Architectural masterpiece. One of the leading mathematics departments in the world: 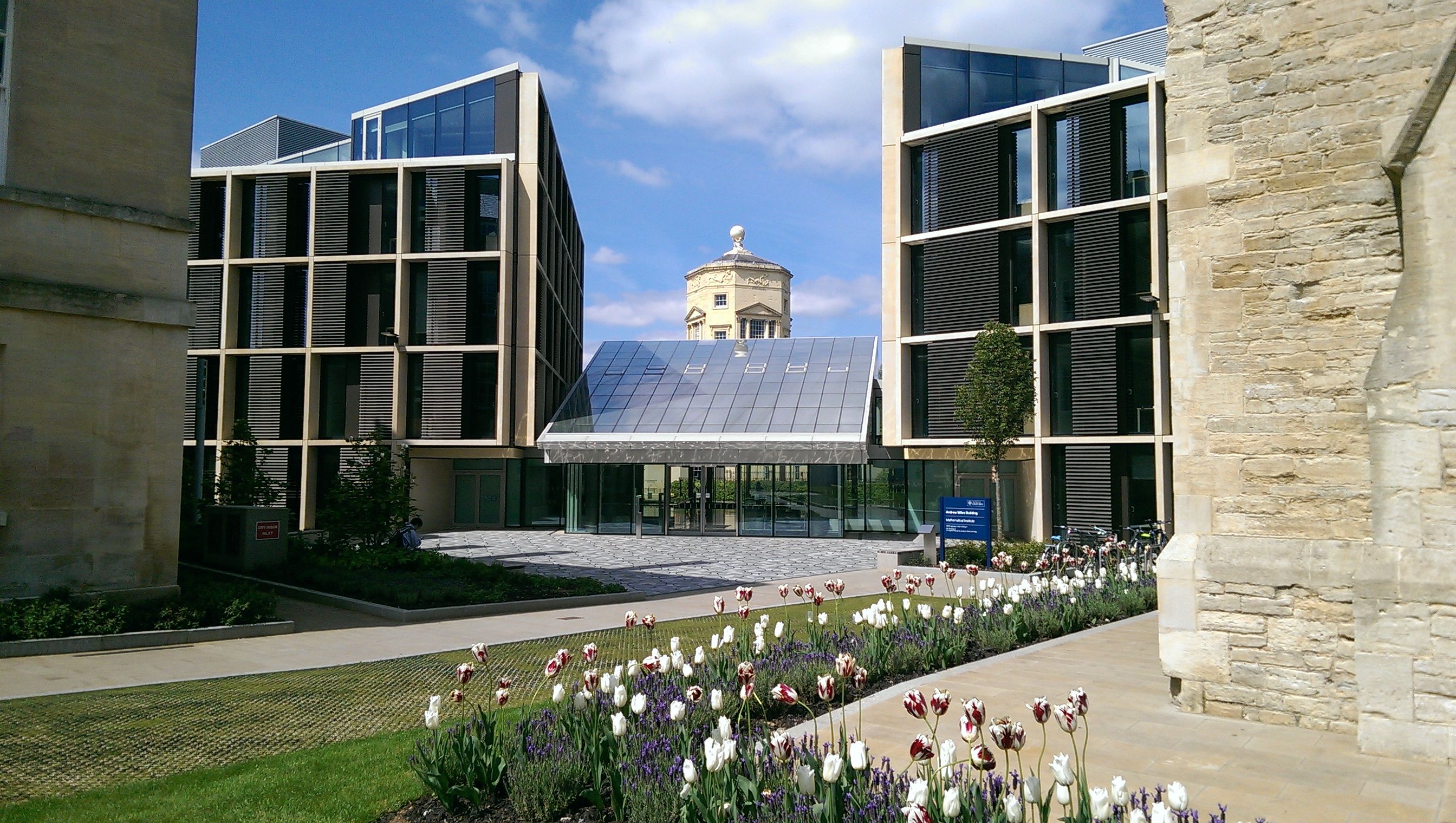 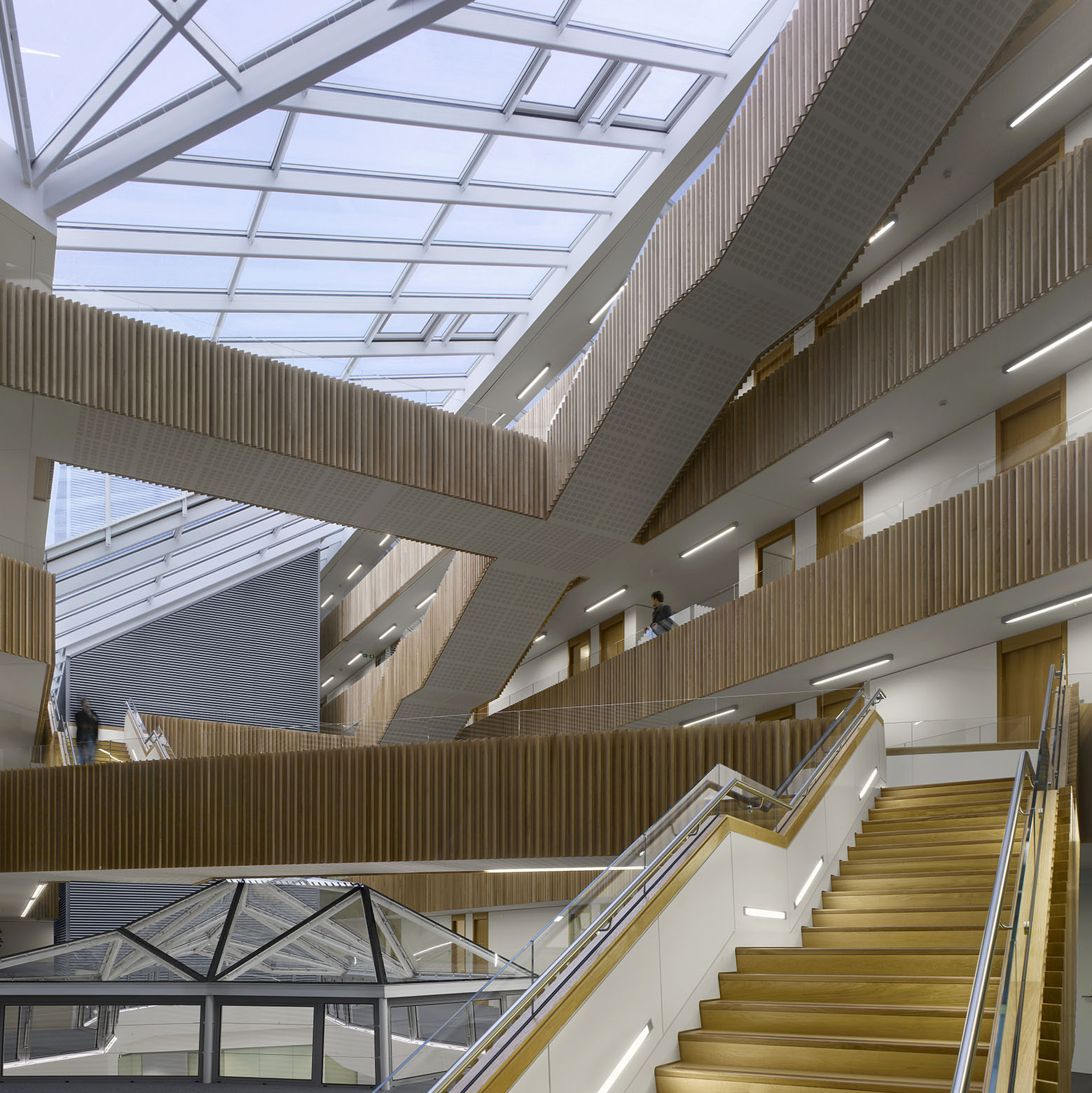 Several steps further south is the Somerville College, Woodstock Road. It was created, in year 1879, for women when universities refused them entry (the college has admitted men since 1994,), and for people of diverse beliefs when the establishment religion was widely demanded - two policies previously unknown in Oxford colleges. Today, around 50% of students are male. The college was named after the eminent scientist and mathematician Mary Somerville (1780–1872). Presently, Somerville is home to around 400 undergraduates and 100 graduate students. The college and its main entrance, the Porters' Lodge, are located on Woodstock Road. The front of the college runs between St Aloysius Church and the Faculty of Philosophy. Somerville has buildings of various architectural styles, many of which bear the names of former principals of the college. The first buildings, in the ROQ regeneration project, to be completed were new student accommodation blocks for Somerville College which opened in September 2011. Past PM, Margaret Thatcher was a famous alumni member of this college: From the Humanities Office - head north on St Giles toward Woodstock Road, 75 m. Turn left onto Little Clarendon St, 220 m. Turn right onto Walton St. for 300 m. and the Jericho Health Centre is on your right. The Jericho Health Centre relocated to Radcliffe Observatory Quarter on Walton Street in July 2012. This building provides the local community with modern, flexible space for three GP surgeries and their associated health care facilities. The offices above the Health Centre are used by Oxford University Press and the University’s Department of Primary Care Health Sciences. The building is owned by Oxford University and the ground floor is leased to the National Hospitals Service (NHS).

Opposite, to the north of the health centre is the  Freud café (opposite the junction of Great Clarendon Street and Walton Street, north to the Blavatnik School of Government). It is housed in the former St Paul's Church, a majestic building designed in 1836 by Henry Jones Underwood. The church construction was triggered by an outbreak of cholera in the area in 1831. The building has an imposing portico with Ionic columns. The architect Edward George Bruton added the apse in 1853 and Frederick Charles Eden remodeled the interior in 1908. In the 20th century, the building became a redundant church and was closed in the late 1960s. The building was bought by the Oxford Area Arts Council and used as a theatre and arts centre venue for more than 20 years. A café/bar was opened in 1988 by David Freud, who has an interest in buildings and their interaction with people. From time to time there are performances of live music such as jazz or blues. David Freud was one of the bitter opponents to the new building for the Blavatnik School of Government of Oxford University on the Radcliffe Observatory Quarter in 2015. The interior setting is very unusual, strange and quirky with the huge pillars, high ceiling and  the holy drawings of the stained-glass windows.  Its main pro is the great expanse of the old, former church. A bit dark inside. Another plus might be the bohemian, respectful clientele. A different experience ! 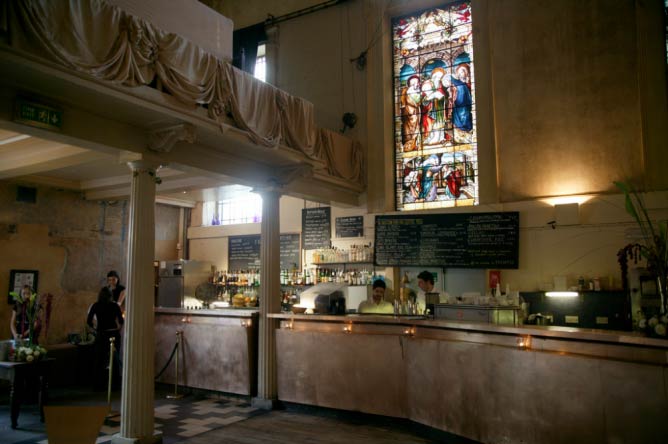 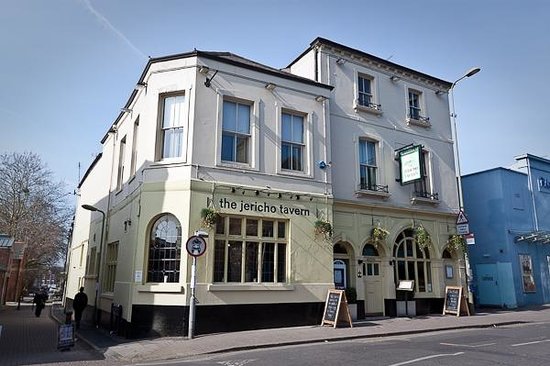 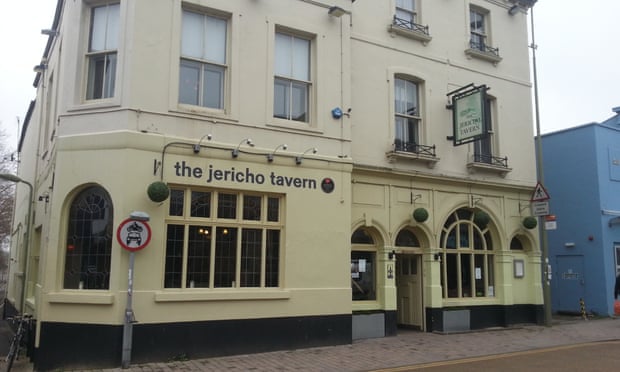 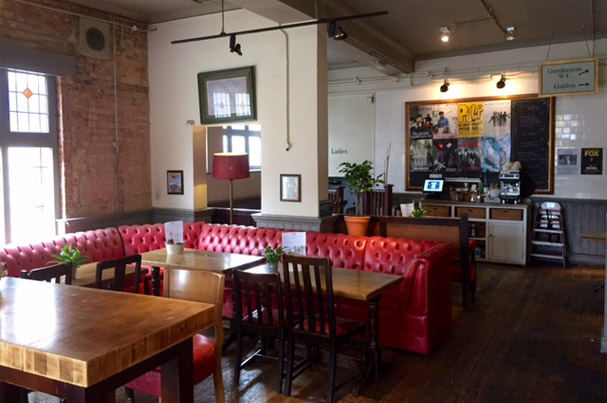 From The Jericho Tavern we head northwest on Walton St toward Cranham St, 220 m. At the roundabout, take the 1st exit onto Walton Well Rd, 230 m. Slight right onto Rutherway, 150 m. The road slights northwest. In its beginning, on your LEFT (south) - raise your head and you'll see WONDERFUL porticoes and friezes on top of one of the long block houses. It is almost on the banks of Oxford Canal (RutherWay).

Noah and the Pigeon from the Old Testaments:

Jacob's Dream from the Old Testaments:

From Rutherway we find the stairs leading down to the Oxford Canal. In this route - we only SAMPLE the canal and walk along a small section of it from south to north: from Walton Well Rd to Aristotle Lane - short (15 minutes walk), beautiful, quaint and inspiring. We devote a special blog to the Oxford Canal.  We stress the point that you can walk ONLY along the western bank of the canal - in this section.  it is a beautiful part of oxford away from all the historical building and worth either a boat ride or a walk by the river. Very relaxing. On your left (west) is the Aristotle Recreation Ground and on your right: houses, gardens, mooring boats, wild flowers, water meadows and wildlife.  Breath, look, listen, smell and admire the nature in its beauty.  Walking along the western towpath - be careful of cyclists. You can carry your trolly luggage while walking along this section. It is whole asphalted and very convenient for canal-side walking. Very pleasant in the right weather !

You can finish the canal-side walk in Aristotle Lane (there are stairs leading to this pretty lane). After climbing the stairs - turn RIGHT (east) to Aristotle Lane and enter The Anchor pub in the junction with Hayfield Road. Excellently prepared, presented and served food. Very reasonable prices although the menu is quite limited. Two dining halls. The first is a standard bar and the other one is more elegant and demanding to impress. They have a seating outside for fine days. Staff is polite, efficient and friendly. Might be very busy (even noisy) in the weekends. Open: MON - FRI: 9.00 - 23.00, SAT - SUN: 10.00 - 23.00:

From here - it is a 20-25 min. walk back to the city centre, or - take bus no. 6 back from Woodstock Road to the centre.  Another option: continue walking east along Aristotle Lane and catch bus S3/S2 to George Street/Carfax Tower in the city centre.