Can be combined with the itinerary of lambeth and the Archbishoph's Park route.

From the Waterloo TUBE station turn left on Waterloo Rd. Head up Waterloo Road, past the Old Vic and crossing The Cut. Go under the railway line, cross Exton Street and enter St John the Evangelist Church churchyard through the large metal gates to the right of the church. The church was designed by Francis Bedford and is one of several churches built in 1822-4 to commemorate Wellington’s victory over Napoleon at the Battle of Waterloo. The church was badly bombed in WW2 and in 1951 was restored. Walk around the gardens to the left and exit through a small metal gate into Secker Street. Turn left and then right. Turn left into Cornwall Road. Walk to the end of the road and turn right into Stamford Street. Cross the road via the controlled crossing and turn left into Coin Street. On the left is the Coin Street Neighbourhood Centre: Look out for the ITV building at the end of the street. Turn right, into Upper Ground, and follow this street, passing upper Ground Market Place on the left. Walk into the Spain Gardens on the right. 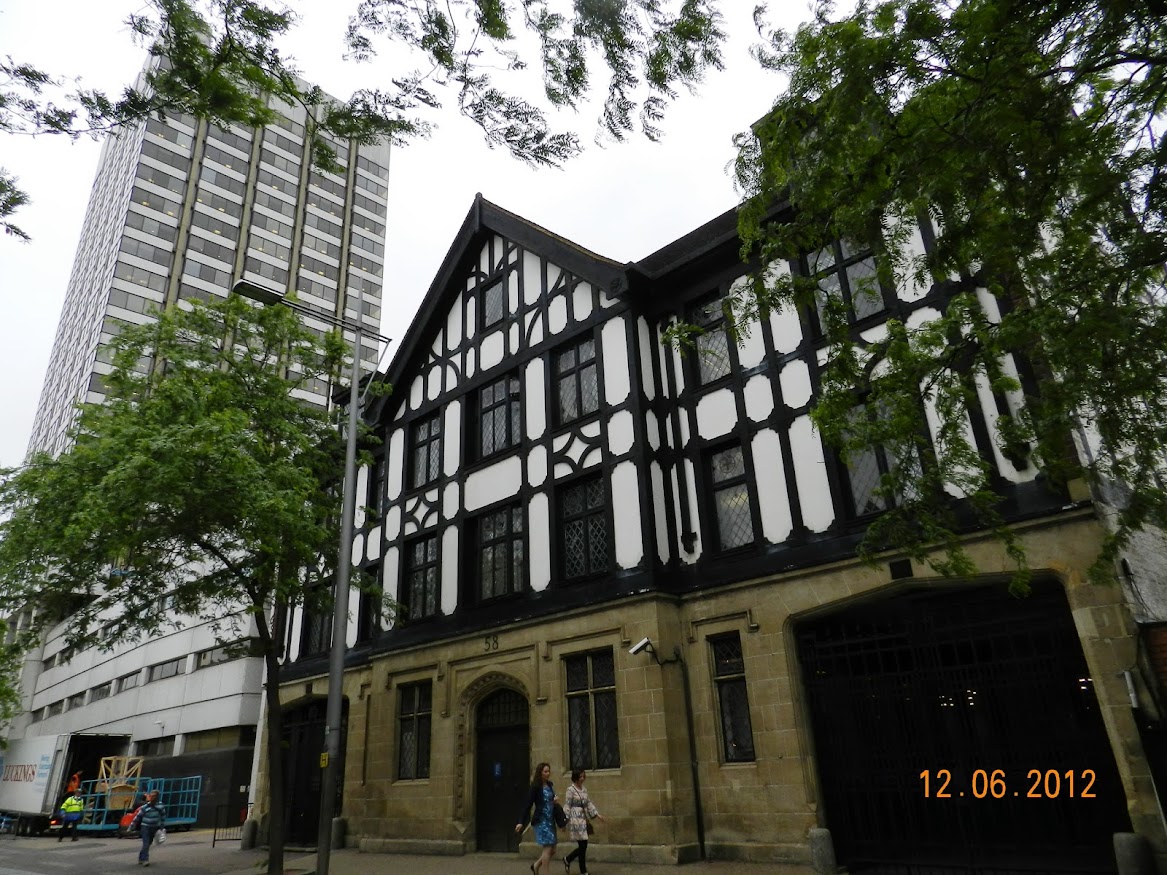 This garden is named after local resident and campaigner Bernadette Spain. These gardens occupy the site of the former Eldorado Ice Cream Company premises. 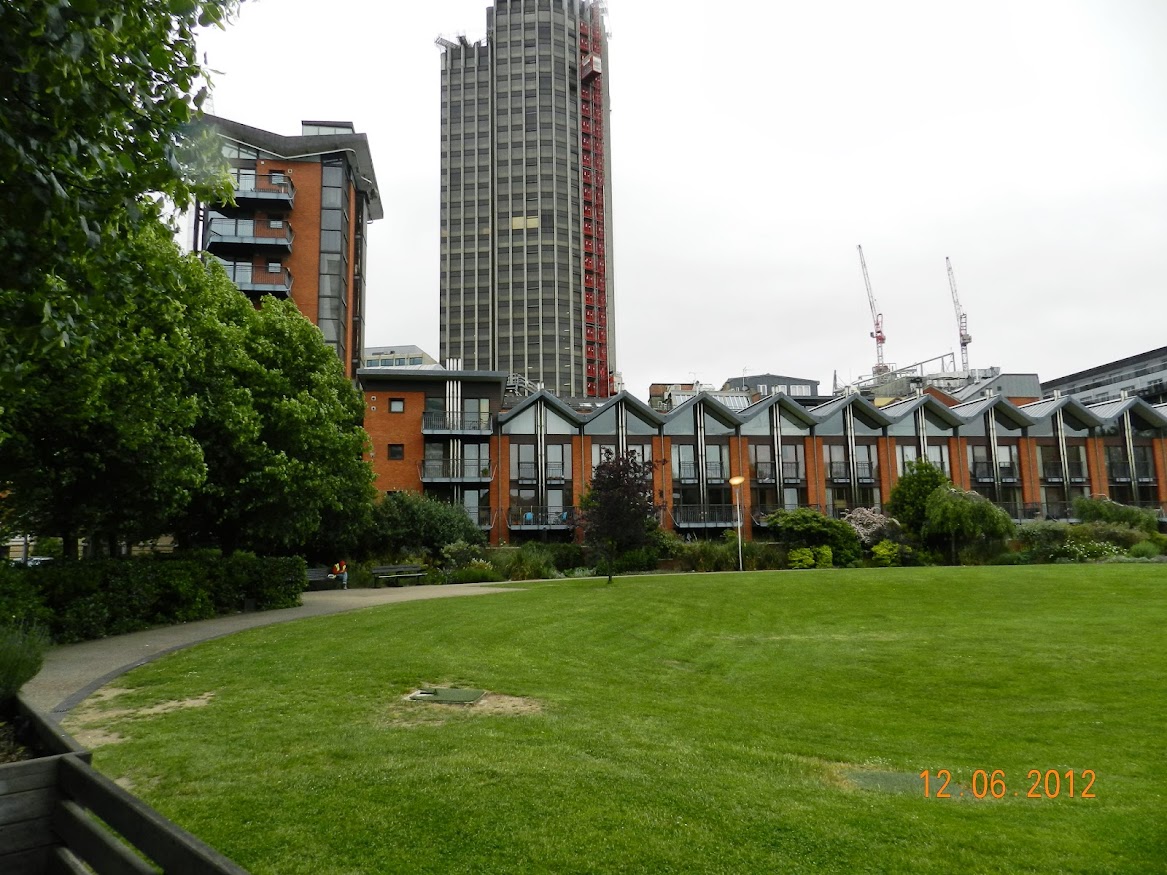 Walk to the left around the gardens. Where the path turns to the right, take the exit on the left and exit via a small metal gate. You are now in Stamford Street. Do not miss the impressive pillared building on your way (Stamford Street 57): 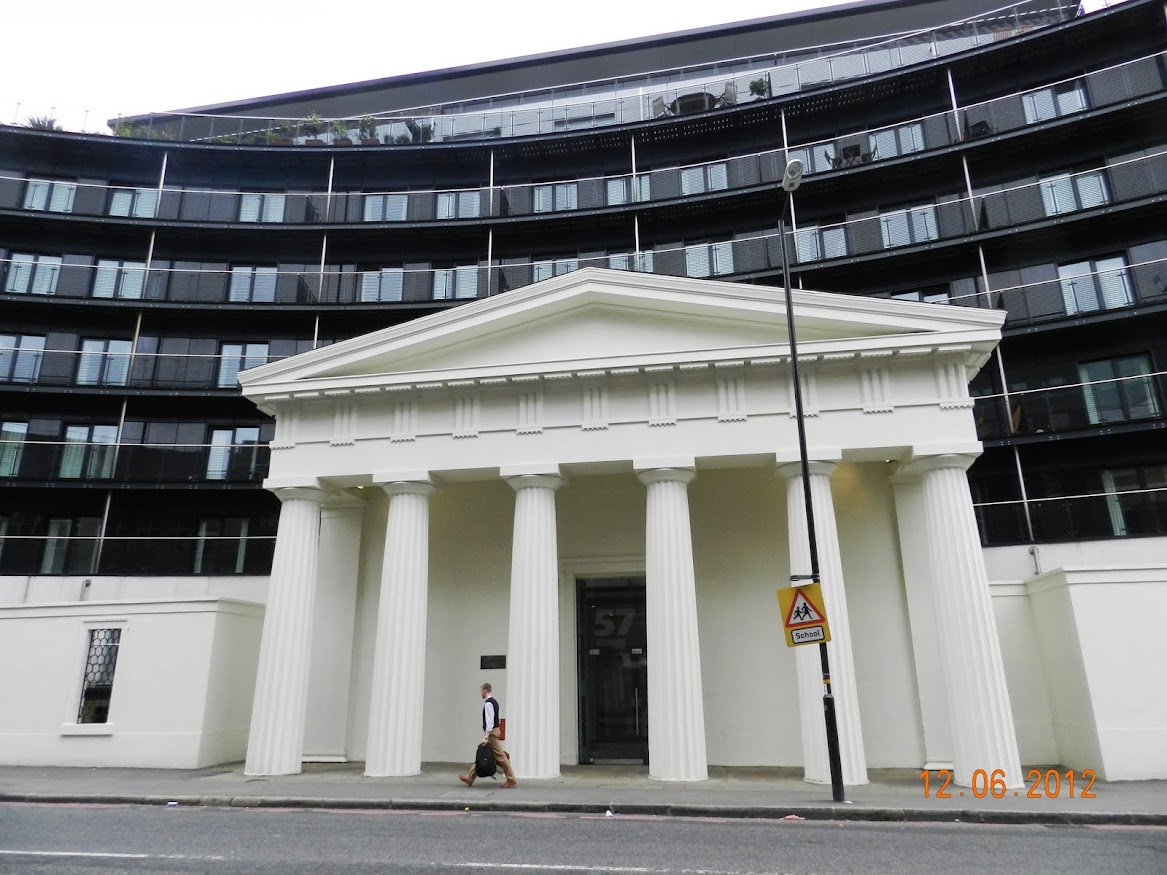 Cross Stamford Street using the zebra crossing and enter Hatfields. In the days of rural Lambeth, there were fields here where beaver skins were prepared for hat manufacture. On the right, there are enclosed sports pitches and next to them a grassed area with trees, Hatfields Green. Beyond this a small enclosed garden, which is visible on the Peabody Estate. Turn left into Meymott Street, then left at Colombo Street and left again into Paris Garden (sadly, there is no actual garden here today) next to the Rose & Crown public house. Spain Gardens which are on the right. Turn right into Christchurch Gardens behind the Rose and Crown; to gain access, you have to walk through the pubs beer garden. Walk past the church so that it is on your right hand side. Turn right immediately after the end of the church and exit into Blackfriars Road immediately opposite some railway arches across the road. Turn right until you reach a controlled crossing. Use this crossing to cross Blackfriars Road and turn left and then right into Burrell Street, next to the railway arches. Walk under the railway arch and at the end of the road, you will see a Holiday Inn Express Hotel. Cross Southwark Street using the controlled crossing and turn left and then right into Hopton Street. A short distance down on the right-hand side of Hopton Street are Hopton’s Almshouses. The Almshouses were founded by fishmonger Charles Hopton. The 26 Almshouses for ‘poor decayed men’ of the parish were erected in 1746-9 and opened in 1752.  Re-trace your steps back to the Holiday Inn Express Hotel on the corner of Burrell Street. Walk past the hotel and turn left into Bear Lane. Walk down Bear Street until you reach the White Hart public house and turn right into Dolben Street. If Bear Street is still blocked, then turn right into Treveris Street. Walk under the railway arch and turn left until you reach Gambia Street and turn left. Walk under the railway arch and turn left into Gambia Street. Walk down Gambia Street under another railway arch until you reach Union Street (there is no evident road sign but you will be opposite the Lord Nelson Public House): 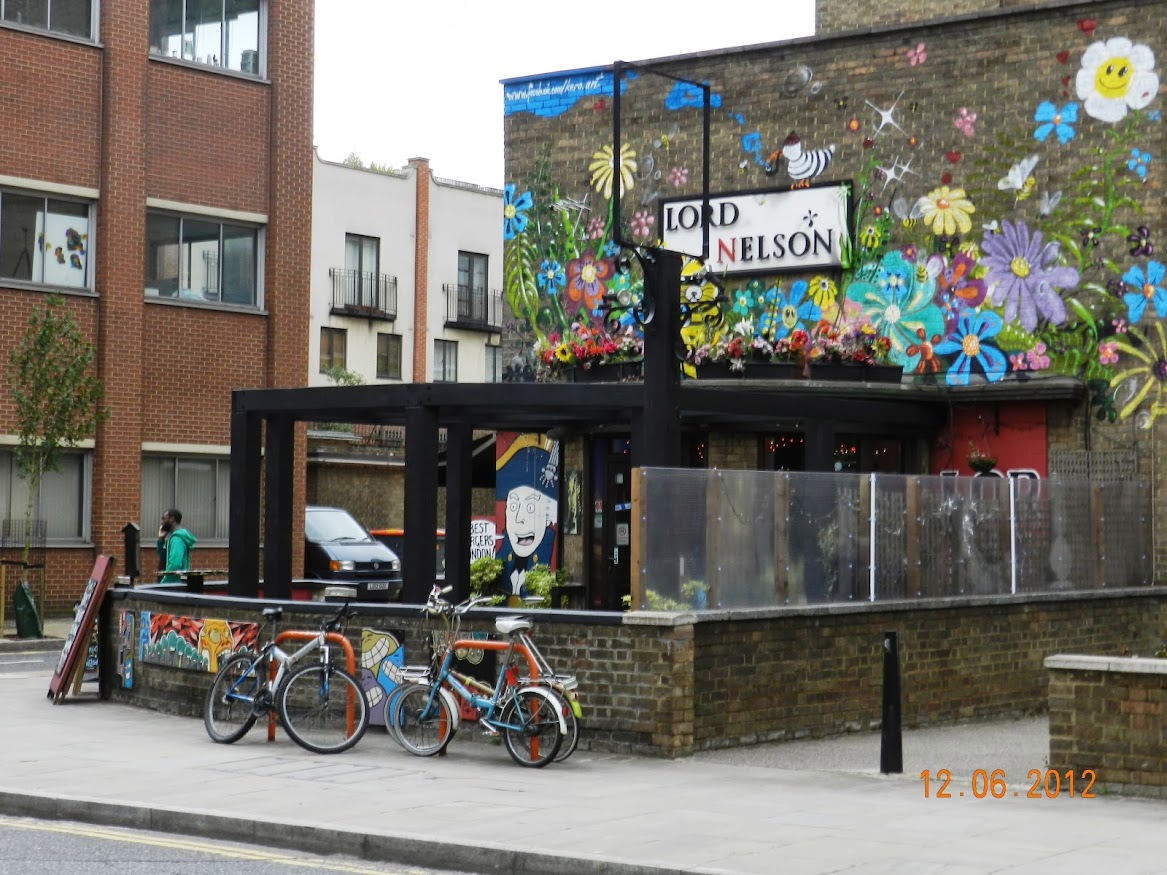 Walk down beside the Pub, to reach Nelson Square. The gardens here were originally for the use of residents of the square, but in 1903, the owner Viscount Halifax gave the site to the London County Council. Enter the gardens through the grey gates immediately opposite. Walk around the garden to the right, passing a blue sports pitch. Enter the rose garden between two low walls and head for the exit in the far bottom left hand corner. Exit the square through a small path between a white painted building and a block of flats. You are now back in Blackfriars Road. Cross Blackfriars Road using the island crossing immediately on your right, watching out for traffic. (If necessary walk further down the road and use the controlled crossing). Turn left and immediately right into Ufford Street, which boasts some very attractive buildings: 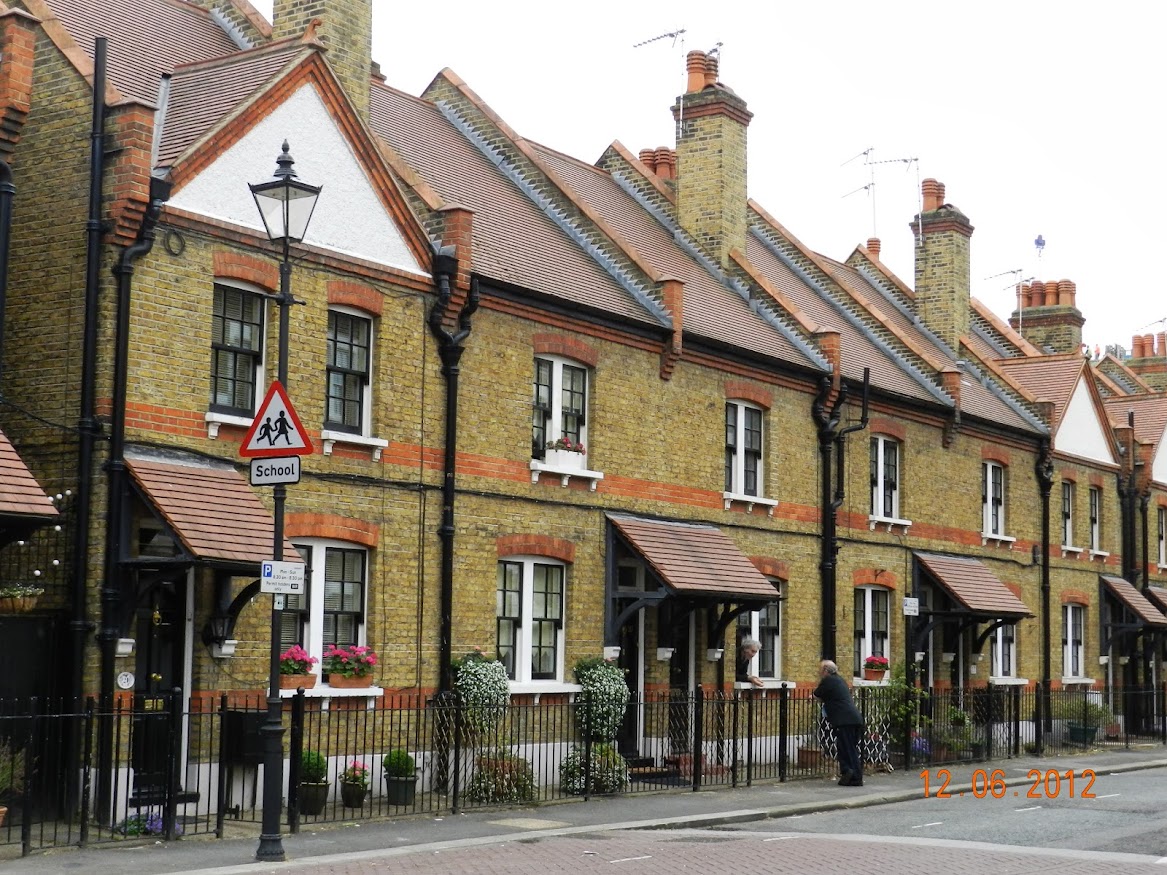 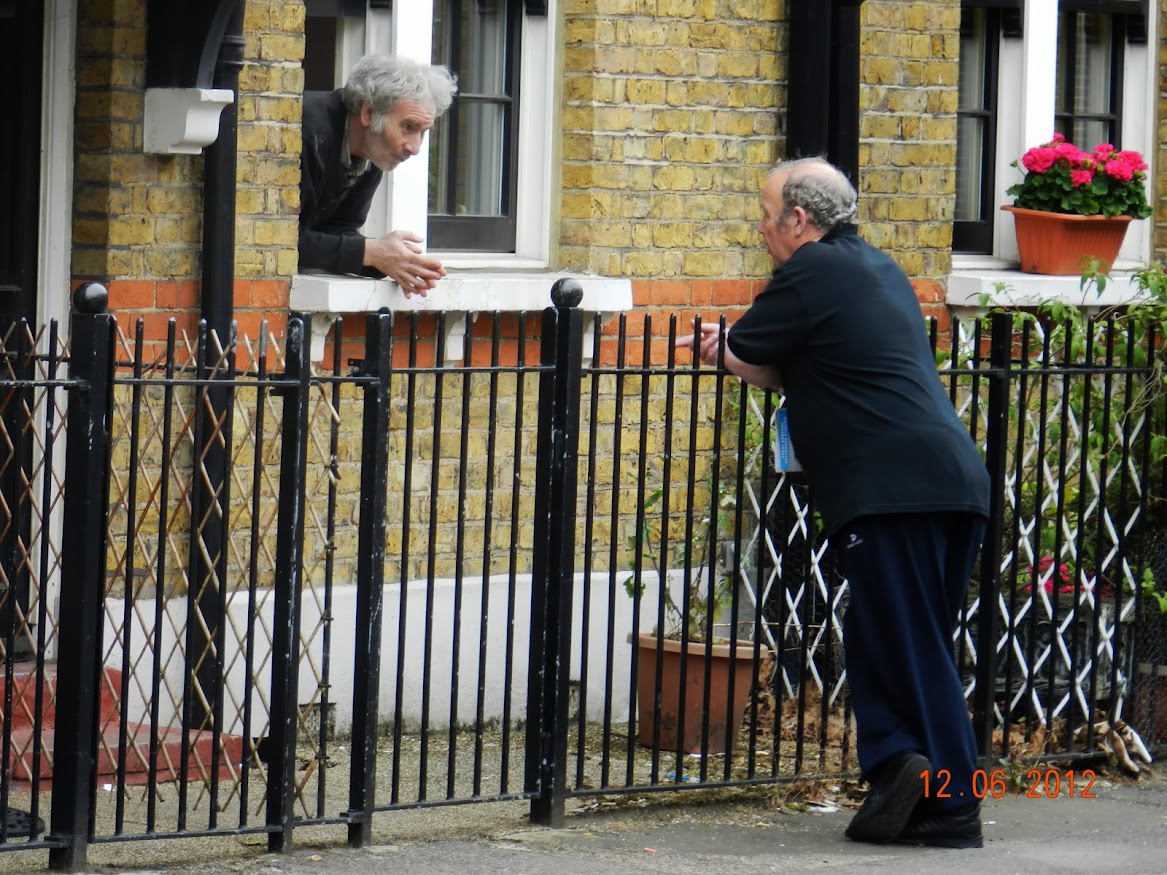 Walk up the street and cross Short Street. Shortly on your right will be the entrance to a recreation ground, Ufford Street Recreation Ground. Walk through the recreation ground and exit at the other side. You are now in Mitre Road. Turn left and walk to the end of the road and cross to the other side of Webber Street and turn right and then left at the Old Vic Theatre. The Old Vic was opened in 1818 as the Royal Coburg Theatre and changed to the Victoria Theatre in 1833. In 2003, Hollywood actor Kevin Spacey was appointed artistic director. Re-trace your steps back in Waterloo Rd. to the Waterloo Tube Station.