Introduction: This walk passes through many green spaces and ancient
woodlands on firm pavements and paths. The walk is mainly level but there some steep ups and downs and rough ground, especially at the end towards Highgate Station. This may be difficult for wheelchairs and buggies but it can be avoided by taking a parallel route. Interesting things to see along the way include the lake in Brent Park, once a duck decoy, the statue of ‘La Delivrance’ at Finchley Road, Hampstead Garden Suburb dating from 1907, the distinctive East Finchley Tube Station opened in 1939 with its famous archer statue and the three woods – Cherry Tree, Highgate and Queen’s Wood – all remnants of the ancient forest of Middlesex.

From Hendon Central Station turn left and walk along Queen’s Road. Cross the road opposite Hendon Park gates and enter the park. Follow the tarmac path down through the park and then the grass between an avenue of magnificent London plane and other trees. At the path junction, turn left to join the main Capital Ring route. 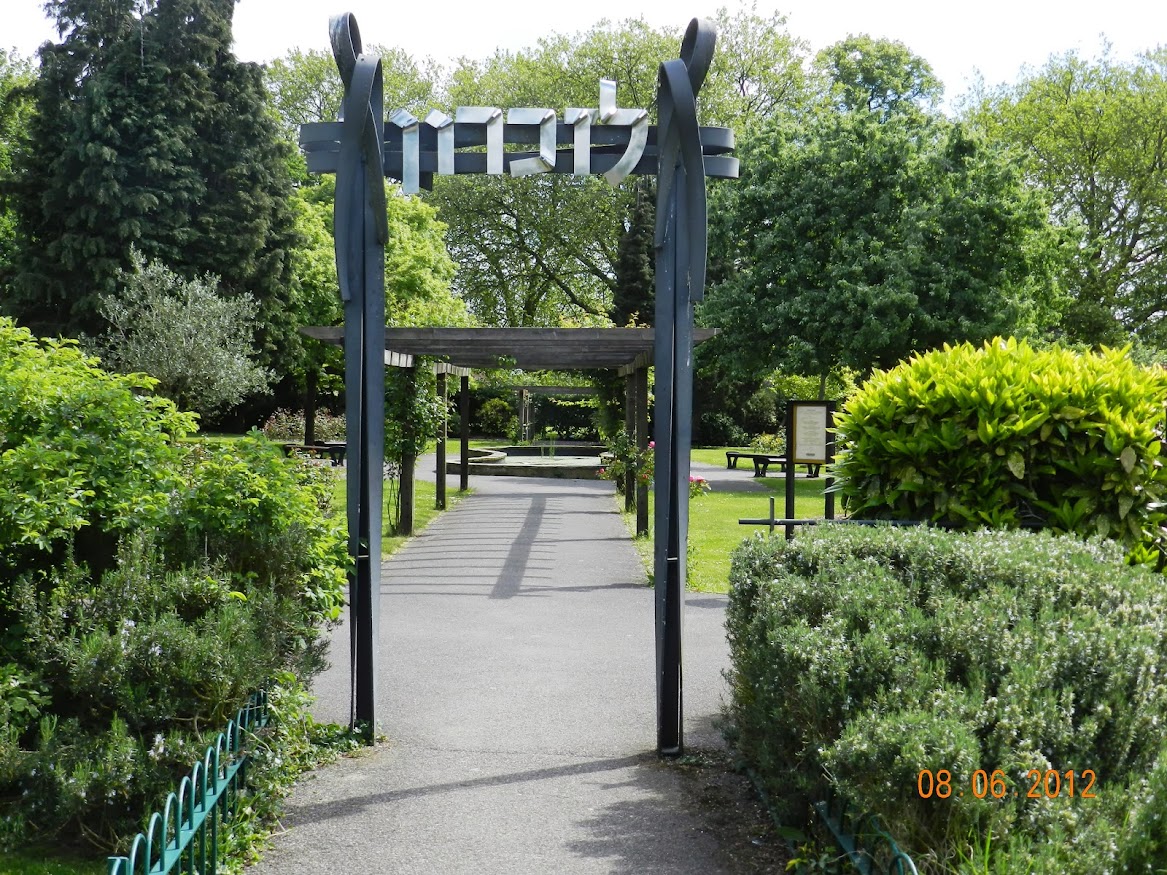 Turn right along Shirehall Close and then left into Shirehall Park. Follow the road around the corner and turn right towards Brent Street. Cross Brent Street, turn right and then left along the North Circular road. After 150m enter Brent Park down a steep slope. The route now runs alongside the River Brent and runs parallel with the North Circular for about a mile. This was built in the 1920s and is considered the noisiest road in Britain. The lake in Brent Park was dug as a duck decoy to lure wildfowl for the table; the surrounding woodland is called Decoy Wood. Brent Park became a public park in 1934: 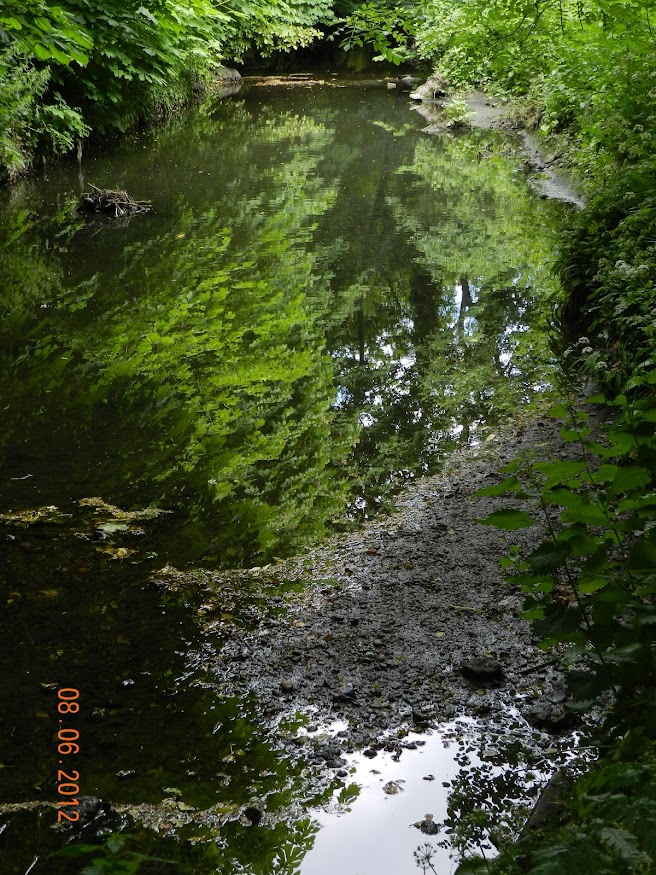 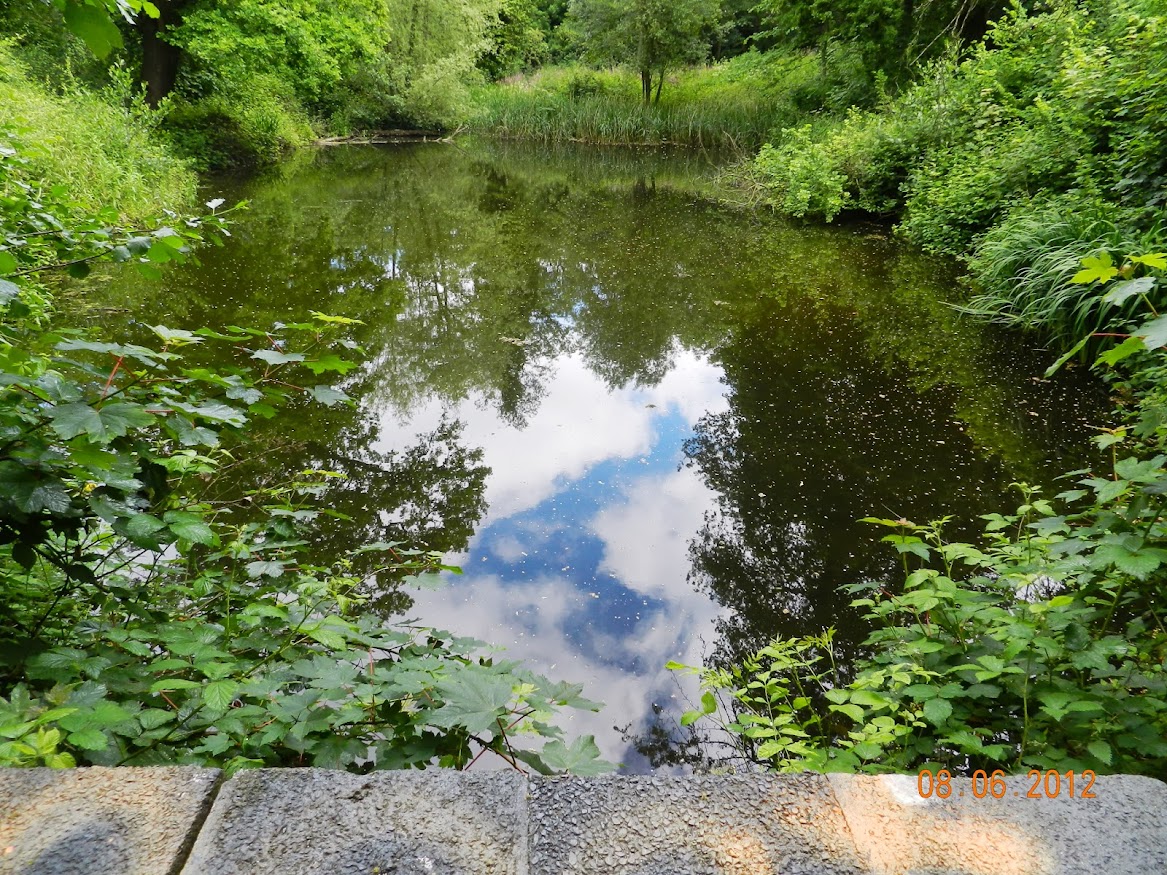 Leave the park turning left into Bridge Lane, cross over and turn right before the bridge into Brookside Walk. The path might be muddy and slippery in wet weather. Where Mutton Brook joins Dollis Brook to form the River Brent, turn right and follow the path alongside Mutton Brook, through the subway and straight on. You are now on part of the Dollis Valley Greenwalk. Keep on until you reach Finchley Road, where there are bus stops. Finchley Road was built around 1826. Just visible on the green, north of the North Circular Road, is ‘La Delivrance’, a 16-foot statue in bronze of a naked woman holding up a sword. It is the work of the French sculptor Emile Guillaume and has a number of local names including ‘Dirty Gertie’, ‘The Wicked Woman’, and most popular (to the exclusion of its real name) ‘The Naked Lady’.  Allegorical commemoration of the victory of France and its allies over Germany in the first battle of the Marne (Sept. 1914) and in the WW1: 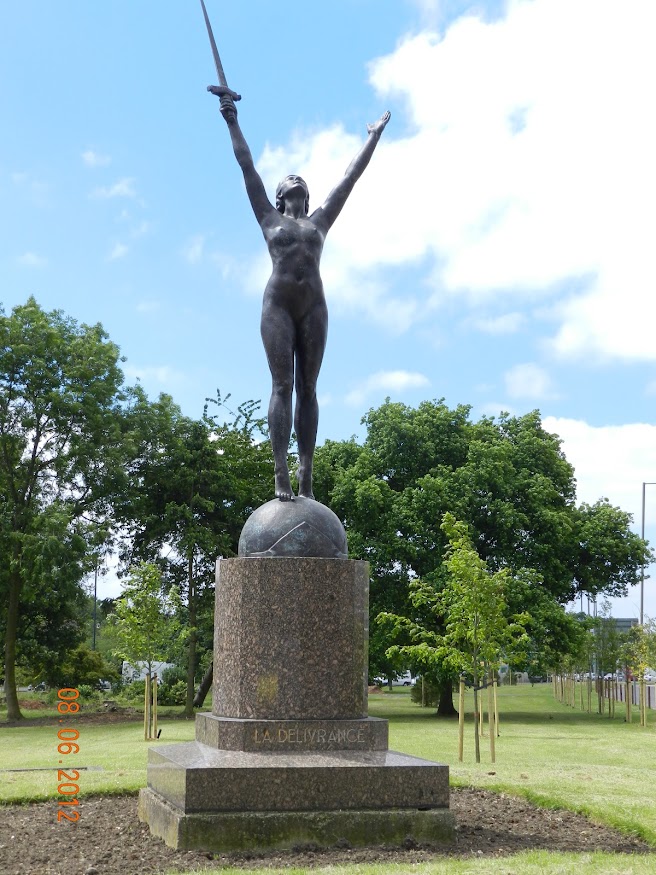 Cross Finchley Road at the lights, turn right and then take the path to the left. Keep straight on over the footbridge. At Addison Way, fork left to keep straight on behind the houses until reaching Addison Way again. Turn left and go straight on, then cross Oakwood Road onto the main road, turn right straight after the bridge over a brook, leading into the parkland adjacent to Hampstead Garden Suburb. Hampstead Garden Suburb was promoted by Dame Henrietta Barnett in 1907 and principally planned by Sir Raymond Unwin, with contributions from many leading architects of the day. Purposefully designed to create a range of house styles and sizes, the suburb offers many open spaces, pedestrian walkways and beautiful mature trees. Carry straight on through Northway Gardens and go past tennis courts to the right and left. Keep left where the path forks and leave the park up the slope. There are cafés here. Cross Northway and enter another riverside park. Follow the path and at Kingsley Way turn right. Kingsley Way is part of the later suburb added in the 1930s. The housing here is built to higher densities with less character and distinction due to increased building costs: 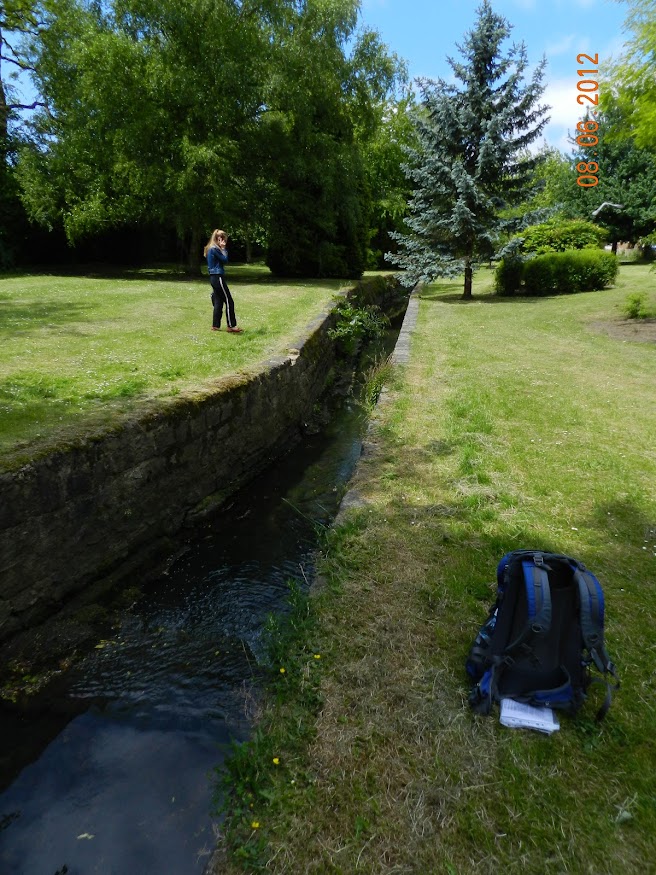 Next enter Lyttelton Playing Fields. At the notice board bear right along the path past the play area, pavilion and tennis courts, all on your left. Leave the park by a narrow lane, turn left into Norrice Lea and pass the 1956 red brick Hampstead Garden Suburb synagogue with its classical stone portico. From here cross over Lyttelton Road, turn right and then immediately left into Vivian Way. At the end of Vivian Way turn left onto Deansway and then right onto Edmunds Walk. From Edmunds Walk follow the signs turning right at the T-junction onto another path, The Causeway; cut through the station when open (or carry on down the path if closed) to reach the Great North Road. East Finchley Tube Station, was opened in 1939. Notice the figure of the Archer by Eric Aumonier, pointing down the line: 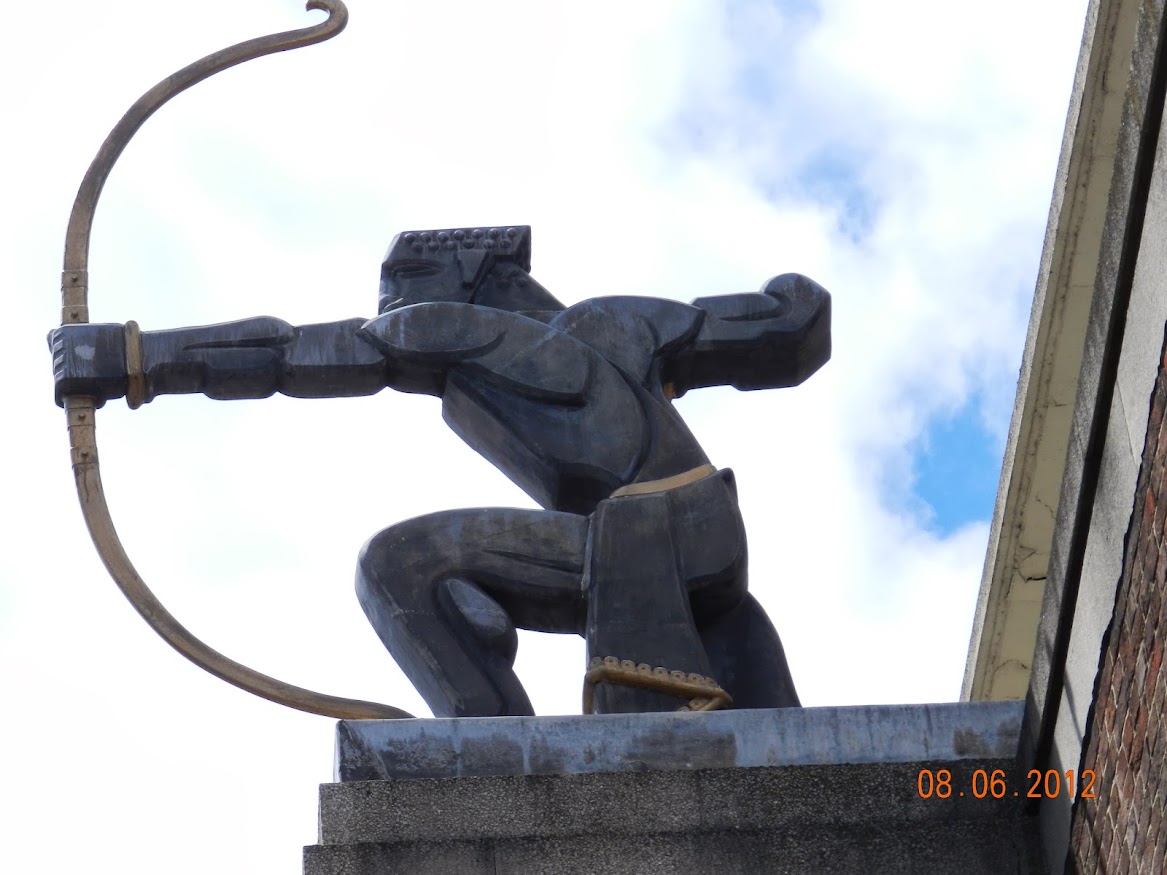 Cross at the pedestrian lights, turn right and bear left just before the bridge and enter Cherry Tree Wood. Keep straight on, ignoring paths to right and left, and notice the low lying field which used to be watercress beds. Leave the park just after the cafe and turn left into Fordington Road. At the junction with Woodside Avenue, cross over Lanchester Road and go straight on. Take the steep tarmac path on the left after 40 metres to enter Highgate Wood at Bridge Gate: 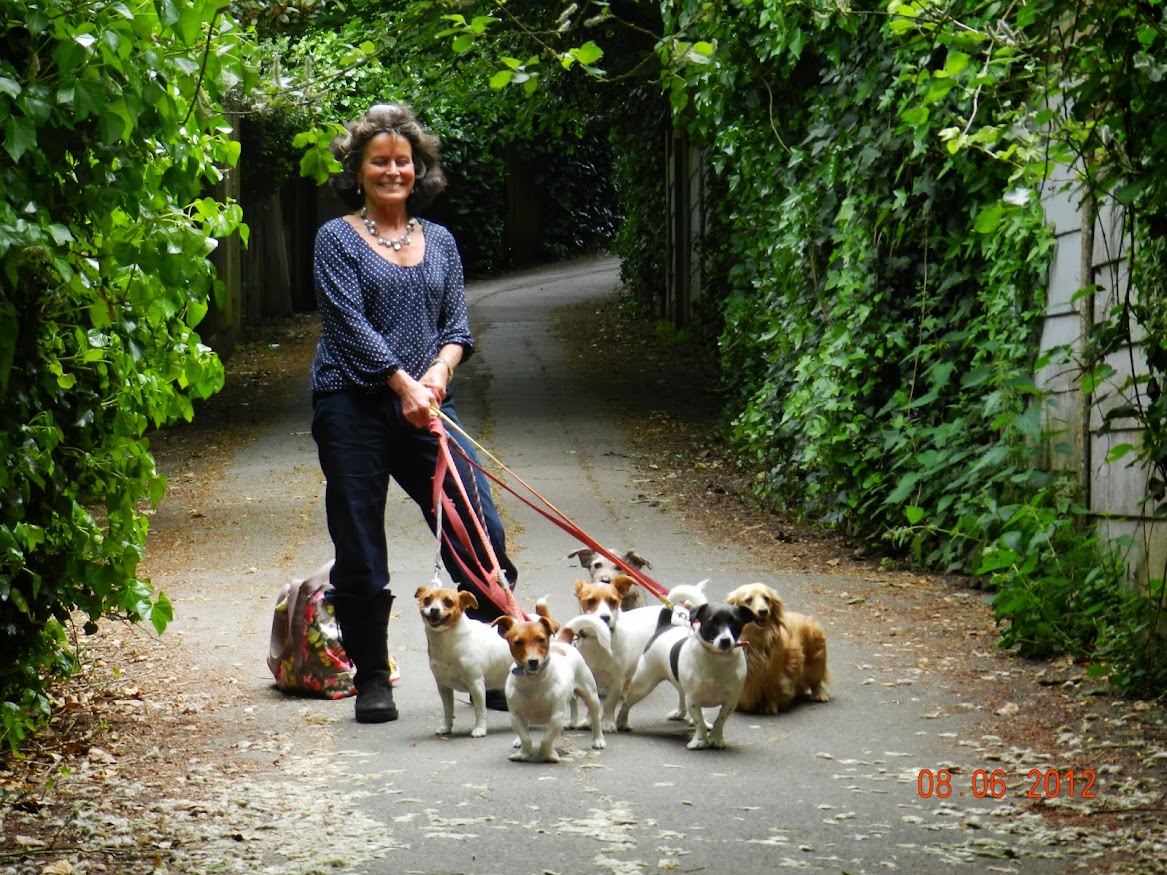 Enter by fine metal gates with their images of animals, and keep straight on to the drinking fountain: 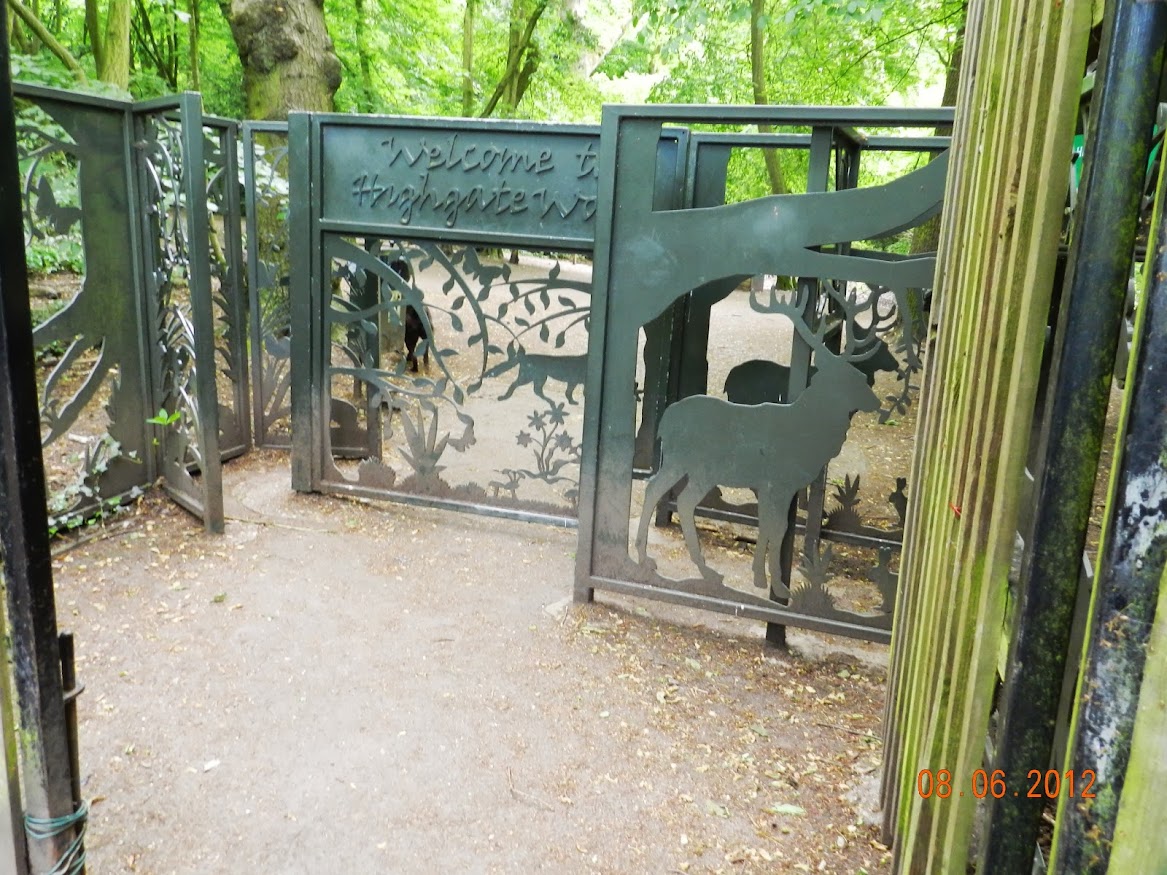 Turn right at the fountain along a dirt track to reach the next junction. There are toilets and a café here. Turn left, passing the wooden cabins housing the nature study centre and then bear right following the path which runs parallel to the road: 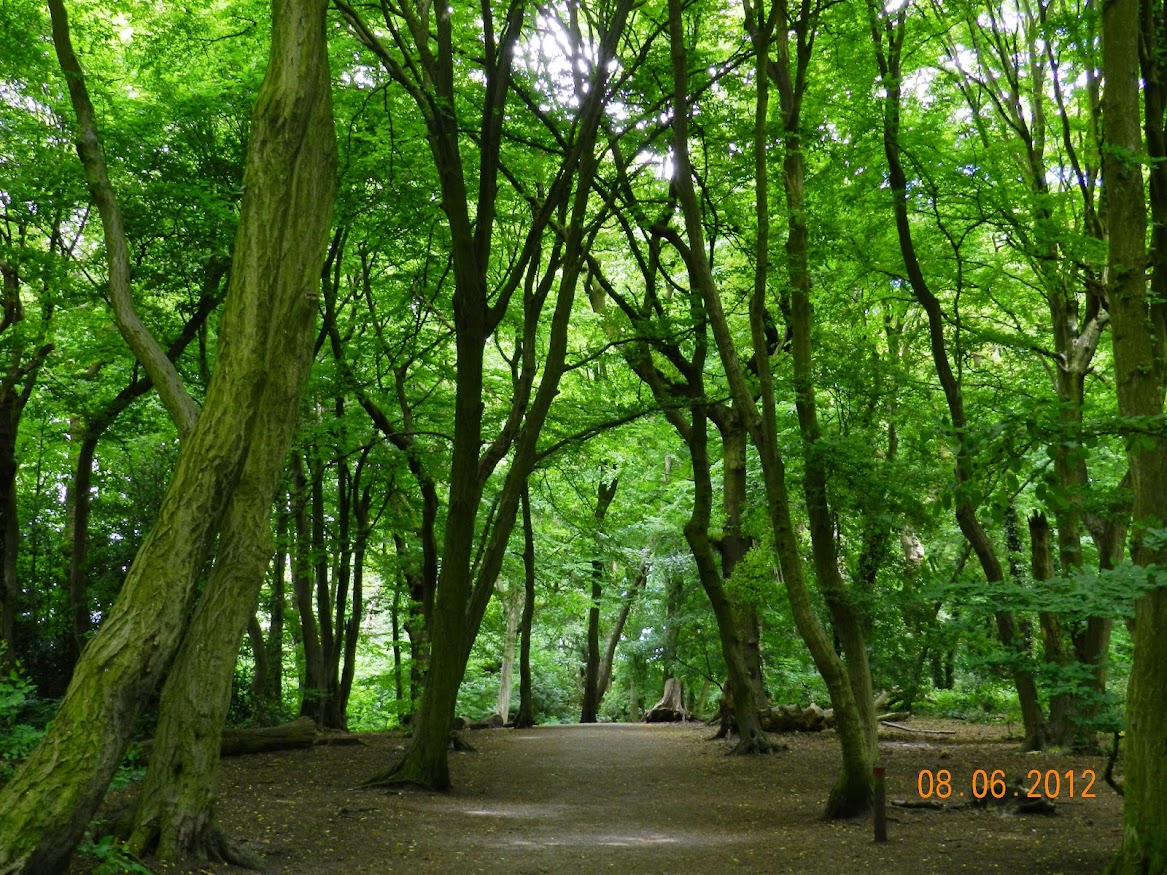 Drop down to the left to exit Highgate Wood through New Gate. Owned and managed by the Corporation of London, Highgate Wood with its 28 hectares of ancient woodland probably dates from the last ice age. Part of the Ancient Forest of Middlesex, the wood features in both the Domesday Book and more recently the Bishop of London’s estate. Cross Muswell Hill Road by the pedestrian lights and immediately enter Queen’s Wood Local Nature Reserve. Follow the downhill path to the Eco-house Lodge, which has a café, and bear right following the Shepherds Hill sign. At the bottom of the hill follow the waymarks up the hill and cross Queen’s Wood Road and then up a steep slope to Priory Gardens: 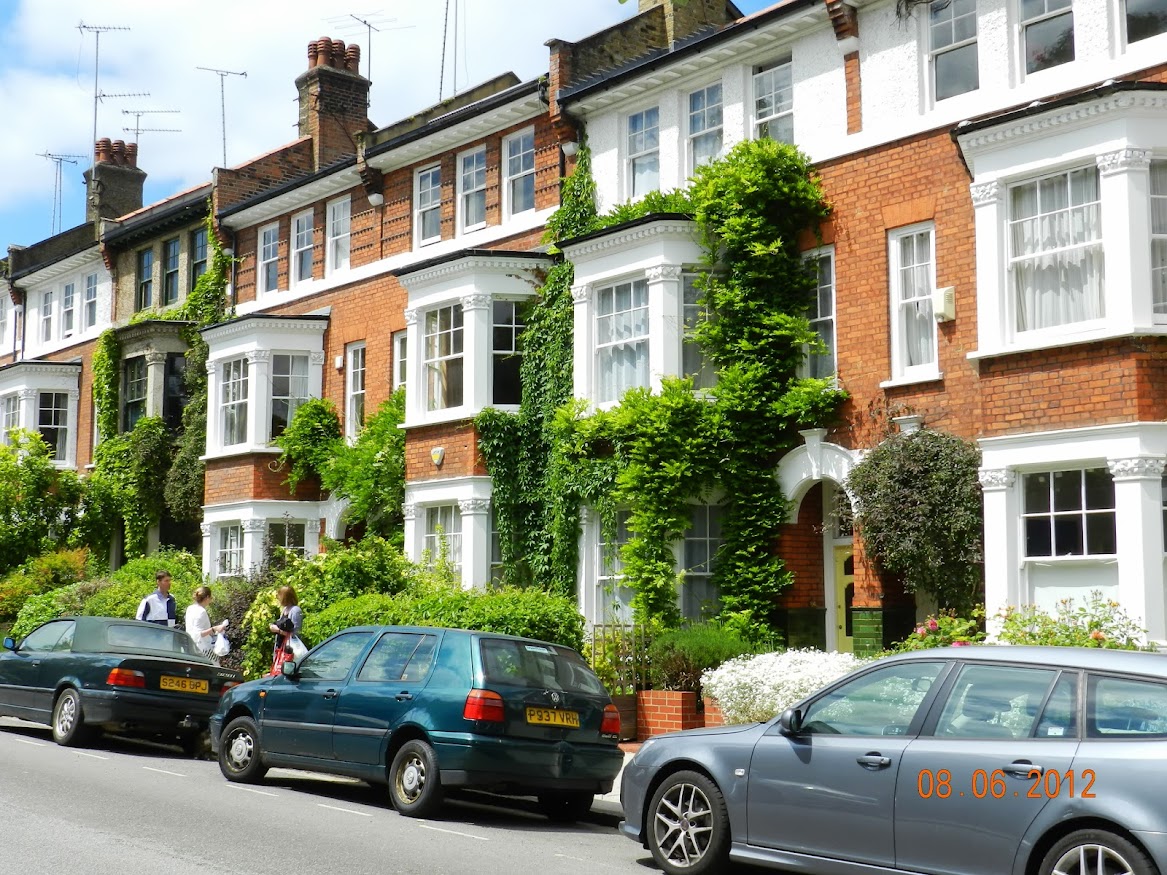 At Priory Gardens, turn right and follow the road towards Highgate station. You may end your daily trip here.

We suggest you to continue your tour with a short stroll in charming Highgate Village: From Highgate Station ascend the steps and turn left (down) to the Archway. In the first junction, turn right and enter the Jackson Ln to have a glance at the vibrant Highgate Community Theatre. Set within a Grade II listed former churc, Jacksons Lane Arts Centre is a multi-purpose arts venue for theatre, children’s shows, workshops, performances and evening classes. There is also a cafe: 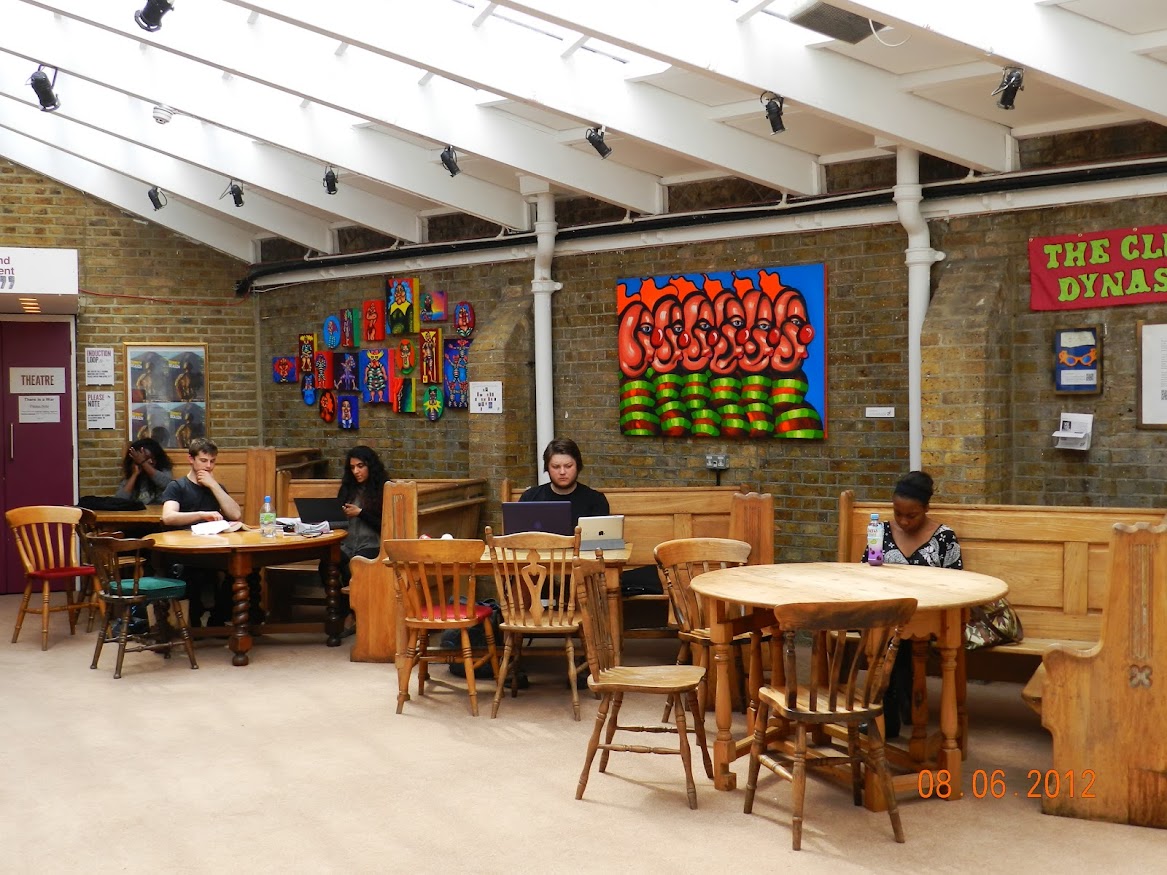 Return to the Archway and walk down the street (south-east). You'll enjoy the special, pastoral, multicultural atmosphere of this road with many interesting houses on your left (west) side. 10 minutes walk down the street will bring you to the St. Augustine of Canterbury Church - home of a thriving community centred around the dignified and involving celebration of the Mass each Sunday: 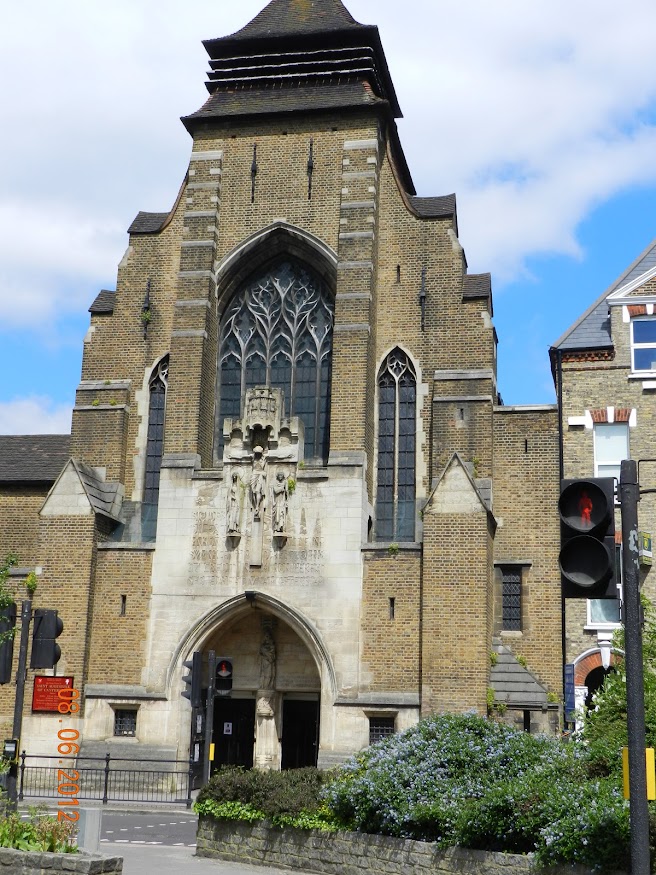 Turn left to Langdon Park Rd. to appreciate the charming row of houses on your left: 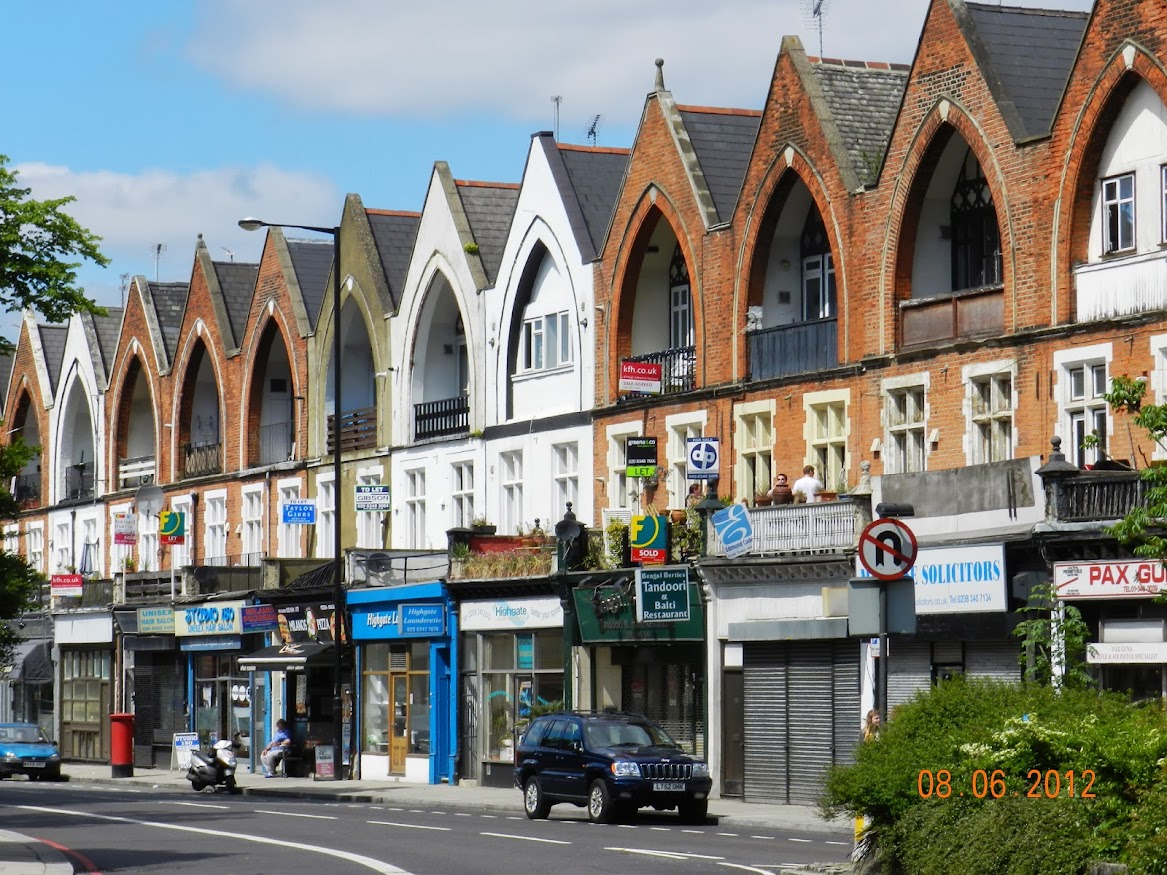 Walking directions to Highgate Cemetery: (by tube - the best way is from the Archway Station - see below). (Don’t go to Highgate tube – it's a much longer walk!).

From Archway Station to the Highgate Cemetery: To reach the cemetery by London Underground, take the Northern Line (High Barnet branch) to Archway. On leaving the station (Highgate Hill Exit), you can catch a bus (143, 210, 271) for the short ride up to Highgate village, from which the cemetery is a six-minute downhill walk. Alternatively, walk up Highgate Hill (past the Whittington Hospital) to St Joseph’s Church with its large green copper dome. Just beyond the church, turn left into Waterlow Park and go downhill across the park, past the duck ponds, to the Swains Lane exit (below the tennis courts). The walk takes about 20 minutes.

Admission to the West Cemetery is by guided tour only. The tour price includes entrance to Highgate Cemetery East. Guided tours last about an hour. OPen: Monday to Friday: one tour daily at 1.45pm. Booking essential: tickets go on sale about a month in advance. Saturday and Sunday: tours normally run every half hour from 11.00  - 15.00. You cannot book. Tickets are sold from 11.00 for all tours that day. Places are limited. Tours: 12 GBP for adults, 6 GBP for children aged 8 to 17. children under 8 not admitted.

Facilities: The cemetery has toilet facilities. Cafés can be found in Waterlow Park and at Lauderdale House (across the park and near St Joseph’s Church). Highgate High Street has coffee shops, pubs and restaurants. There are also shops, cafés and restaurants at the bottom of Swains Lane, near Parliament Hill Fields.

The cemetery's grounds are full of trees and wild flowers. There is an incrediably peaceful and beautiful atmosphere as you wander the small paths through the ancient trees and woodland. The grounds are a haven for birds and small animals such as foxes. For its protection, the West section, which holds an impressive collection of Victorian mausoleums and gravestones allows only tour groups. The East section, which contains a mix of Victorian and modern statuary can be roamed freely. The East cemetery has all the famous people in it, but the West Cemetary is much more picturesque with beautiful Victorian tombs. The East section has maps for finding graves of the famous.

Famous graves: East - Karl Marx, George Eliot, Douglas Adams (author of Hitchhikers Guide to the Galaxy) and Max Wall. West - Michael Faraday, Lucian Freud and those of Charles Dickens' family (although not the novelist himself, who is buried in Westminster Abbey). 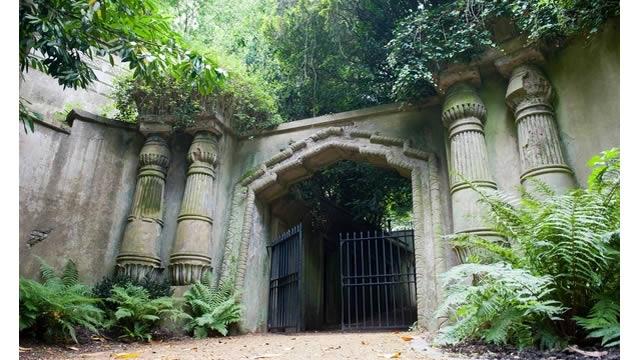