The original web site states that the route is only 9 km. From my experience it is about 12 km. After strolling in Harrow-on-the-Hill and Harrow School (quite demanding because of the hilly vroads in the village (!) - you'll need quite a lot of a patience and fit to find your way entering and exiting Nortpick Golf park.

Anoter warning: IT IS STRICTLY FORBIDDEN TO TAKE PHOTOS OF HARROW SCHOOL STUDENTS.

Introduction: This walk of is mainly level on firm ground – tarmac, pavements and grass. However, there is a steep slope up orsenden Hill and another up to Harrow-on-the-Hill. Some of the tracks might be a bit muddy and slippery in wet weather and others are uneven.  There are some steps, kissing gates and the only stile on the Capital Ring; so much of the section is not accessible for wheelchairs.

There are pubs and cafés at Greenford, Sudbury Hill, Harrow-on-the-Hill and South Kenton and public toilets at Horsenden Hill Visitor Centre.

There are break points at Sudbury Hill, Sudbury Hill Harrow, a long link to
Harrow-on-the-Hill and Northwick Park, all on the underground or national rail, as well as buses along the way.

Directions:
From Greenford Station, cross the road and turn left under the bridge. Turn right along Rockware Avenue, passing the station bus stops. Cross the main road (Greenford Road), then turn left towards the Westway Cross Shopping Park sign, where Section 9 of the Capital Ring starts.

Keep ahead along a shared-use track. Continue through a tunnel under the retail park access road into Paradise Fields Wetlands: 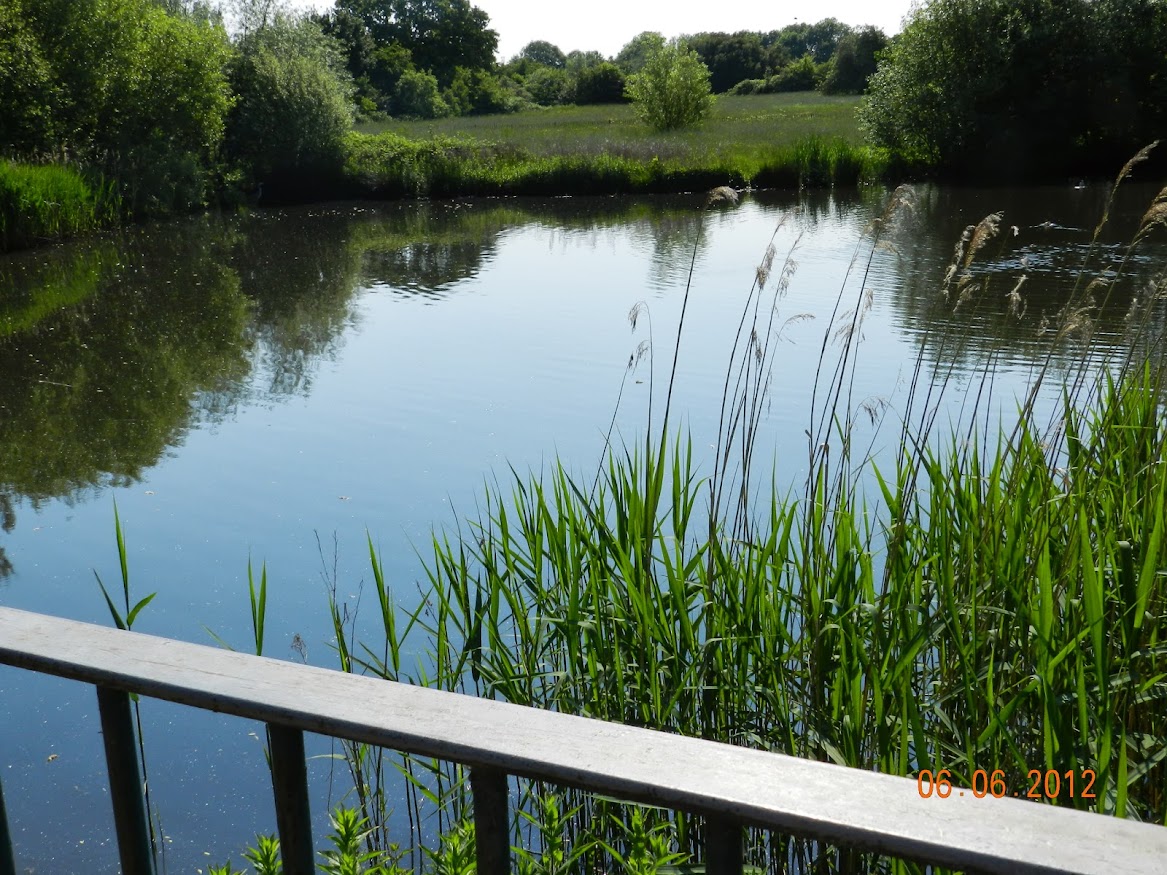 Golf Course and has quickly established itself as a haven for wildlife. The
site is now managed primarily for nature conservation and comprises reed beds, wetland areas and hay meadows. A number of rare bird species nest here, including reed buntings and several species of warbler. In recent years a pair of lapwing has bred, a rare occurrence in Greater London. Look at the information panels that tell you about the three walks in the area and follow the purple posts for the one around Paradise Fields.

Follow the main path around to the right, passing a pond with a viewing
platform. After crossing a stream, the path rises to a footbridge: 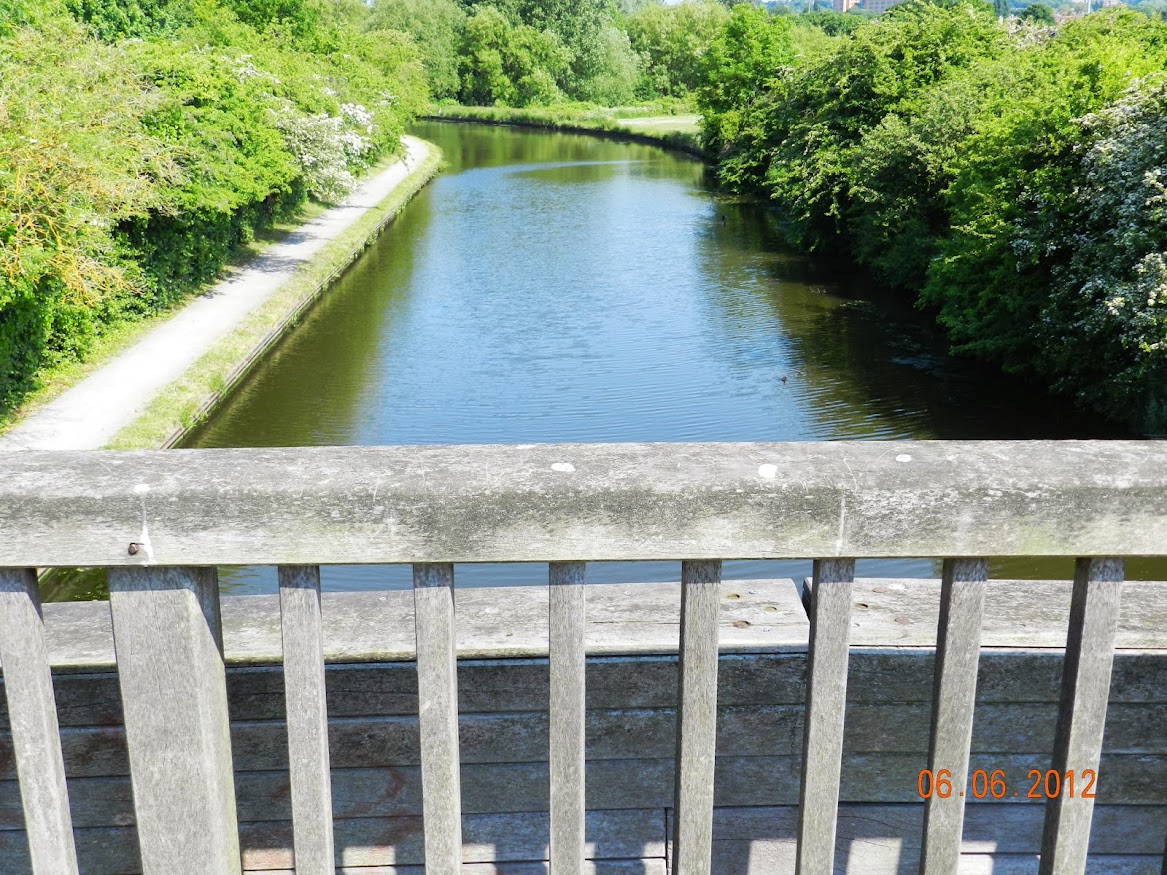 Just before the bridge, bear left down a slope on to a canal towpath, where you turn right. Follow the towpath for nearly a mile to a road bridge, known as Ballot Box Bridge: 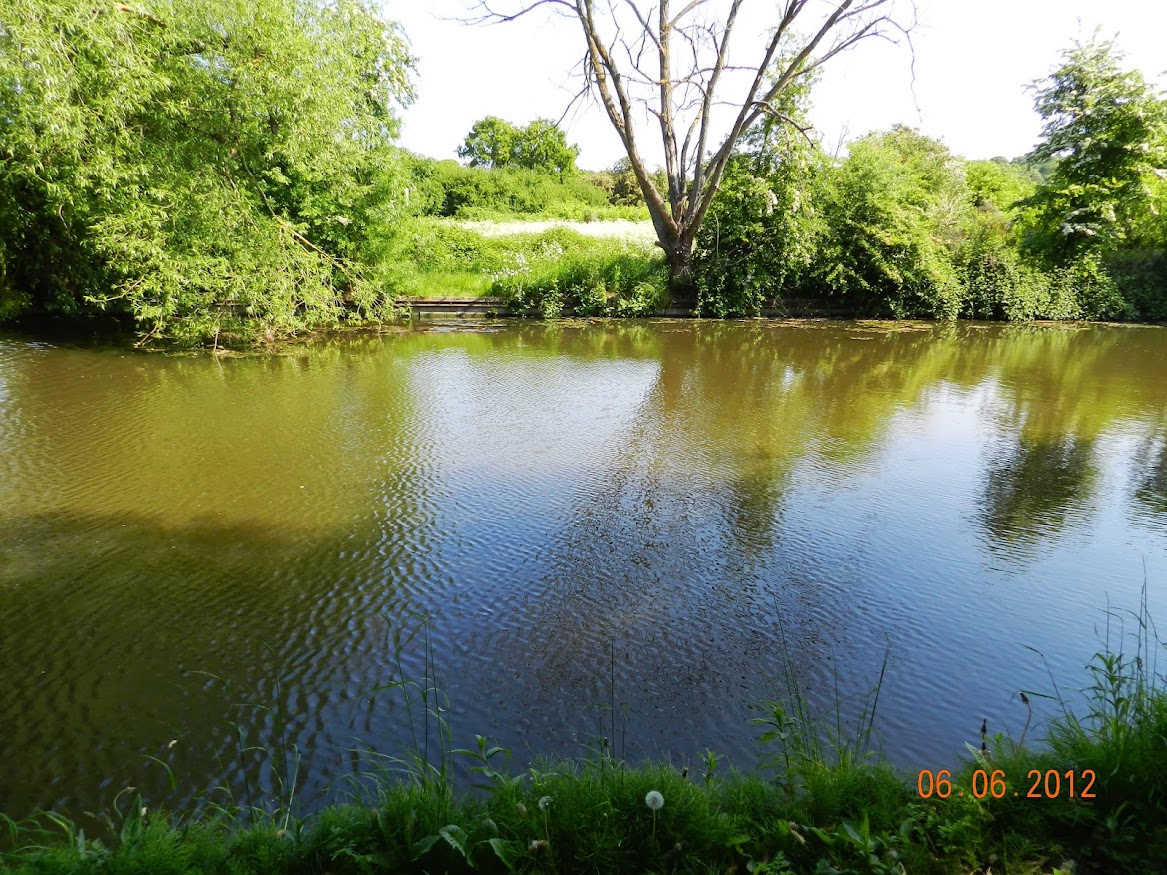 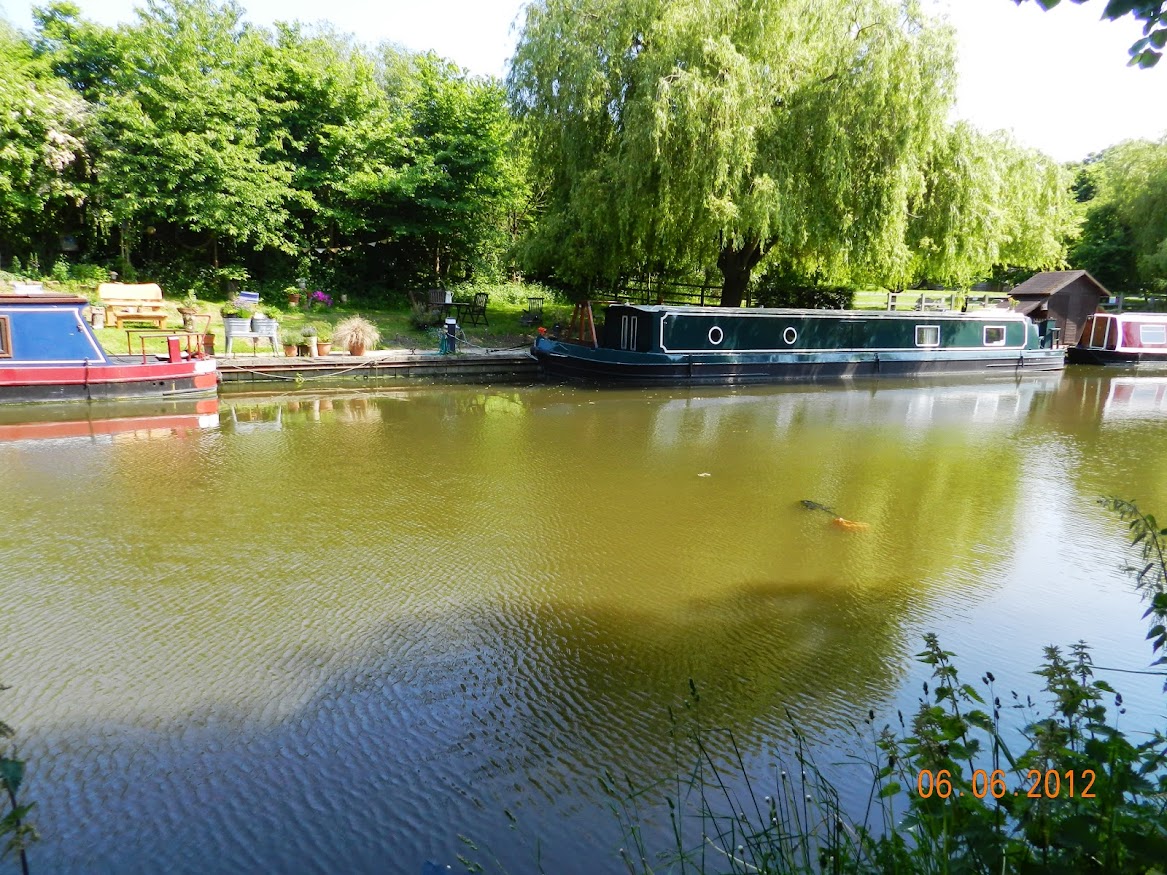 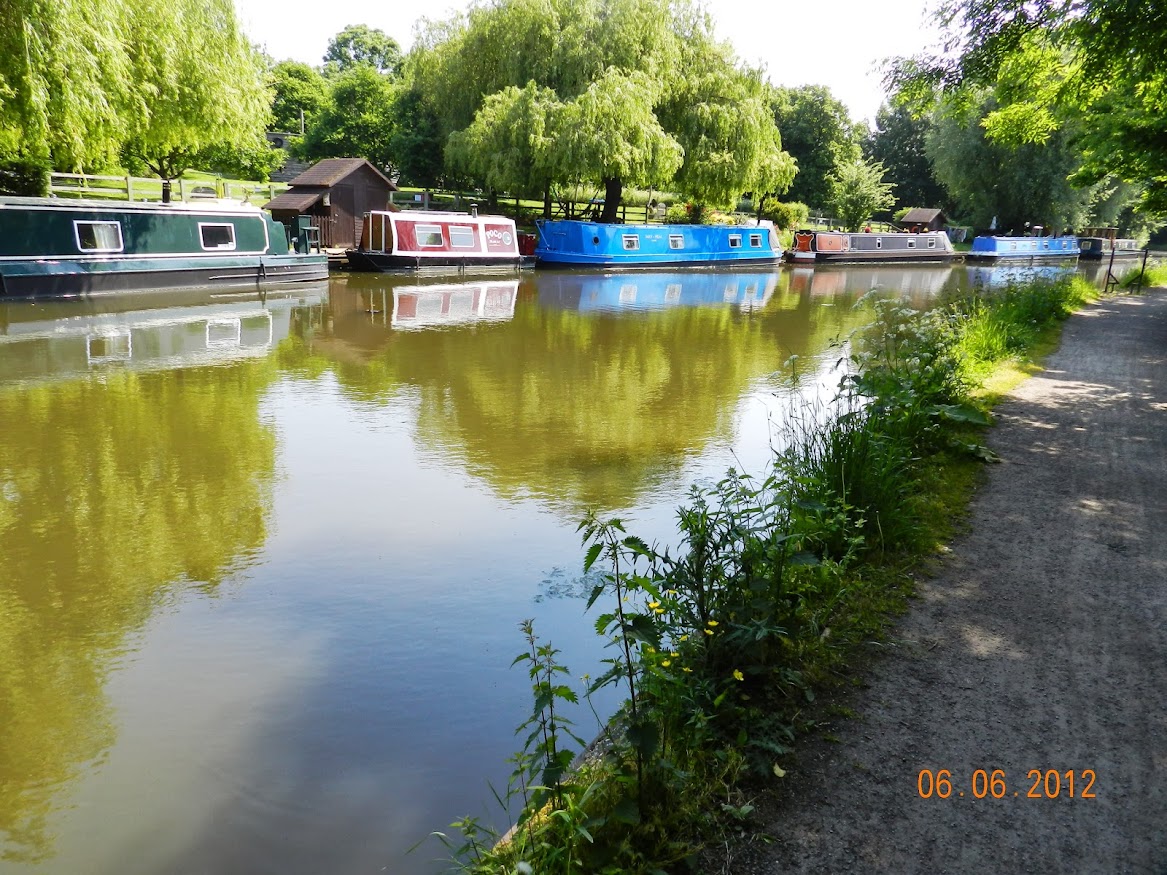 Pass under the bridge, then turn right off the towpath and go through the first gap in a fence to Horsenden Lane. Go the right and cross back over the canal on a footbridge. The main route continues ahead past the drive to Horsenden Farm but there is an alternative route taking in the Horsenden Hill Visitor Centre, located in the old farm buildings. Follow the trail of wooden sculptures, which are also seats: 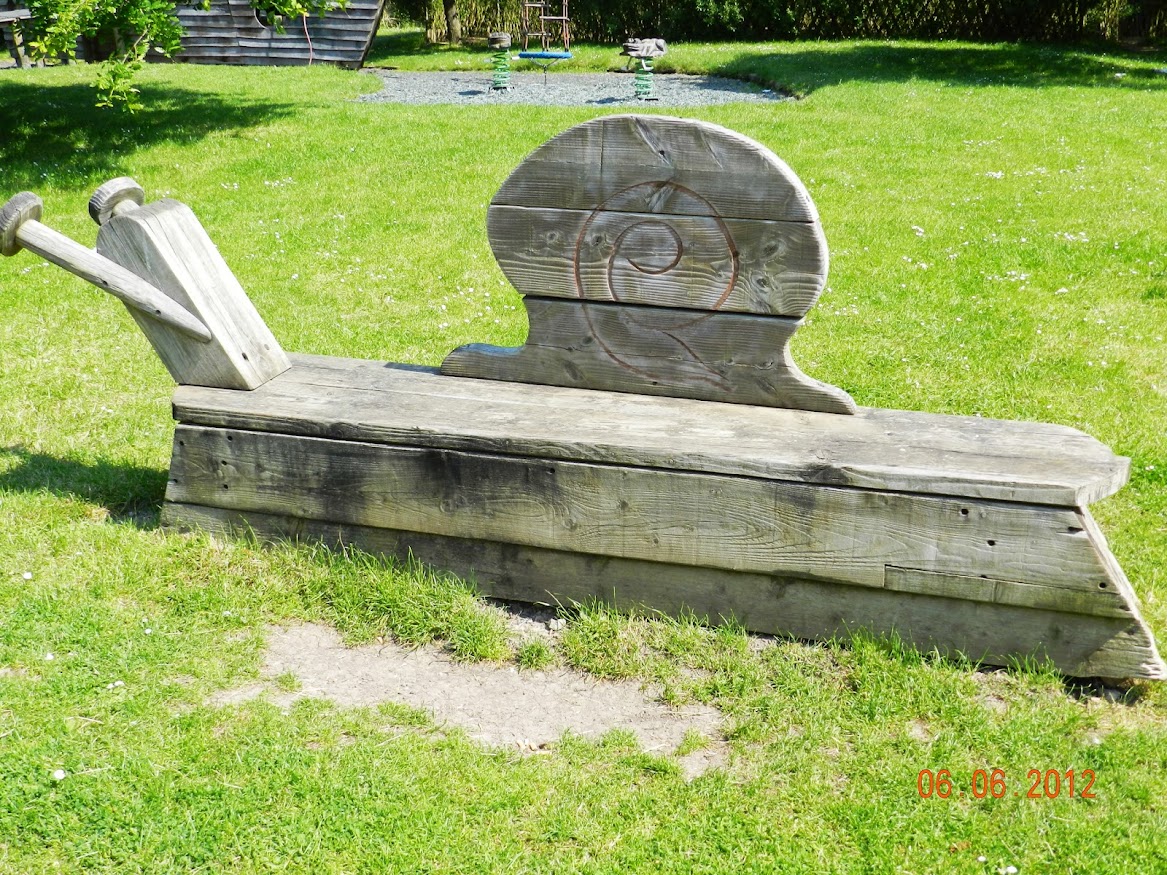 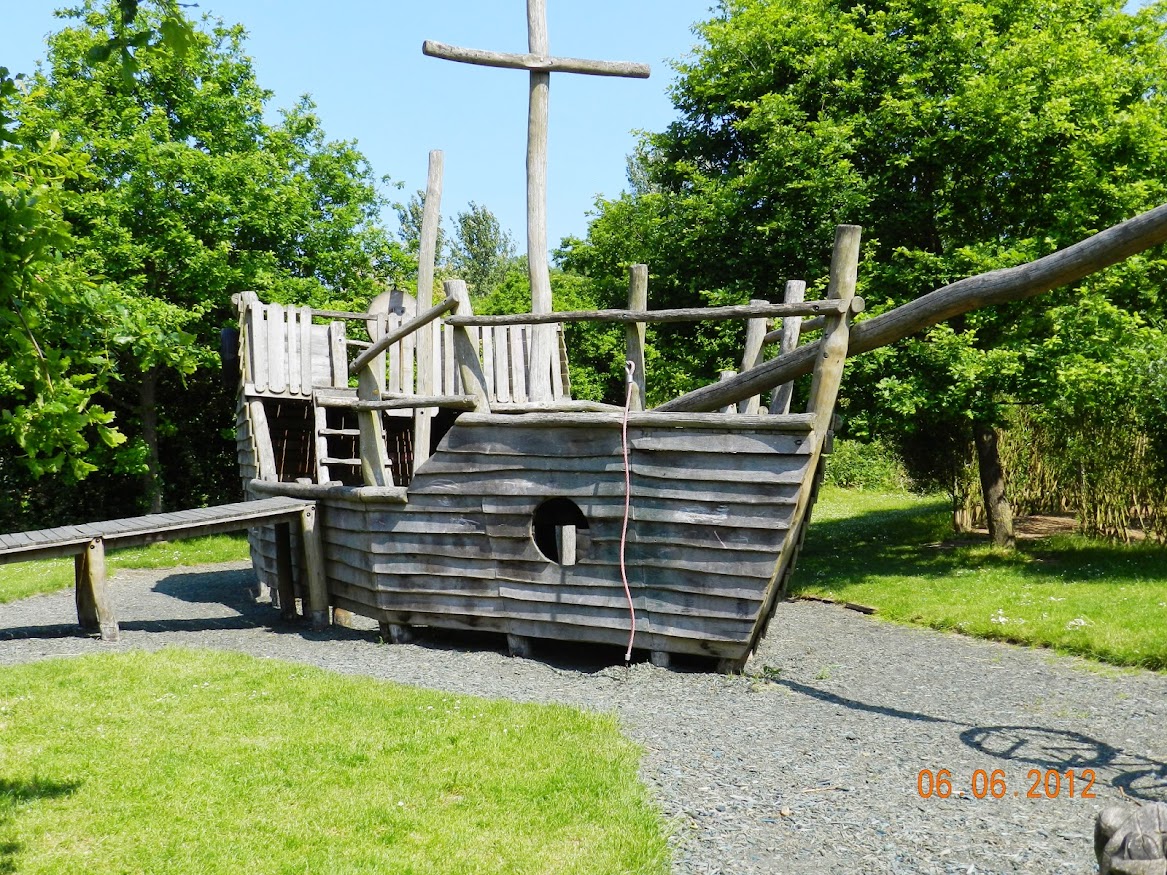 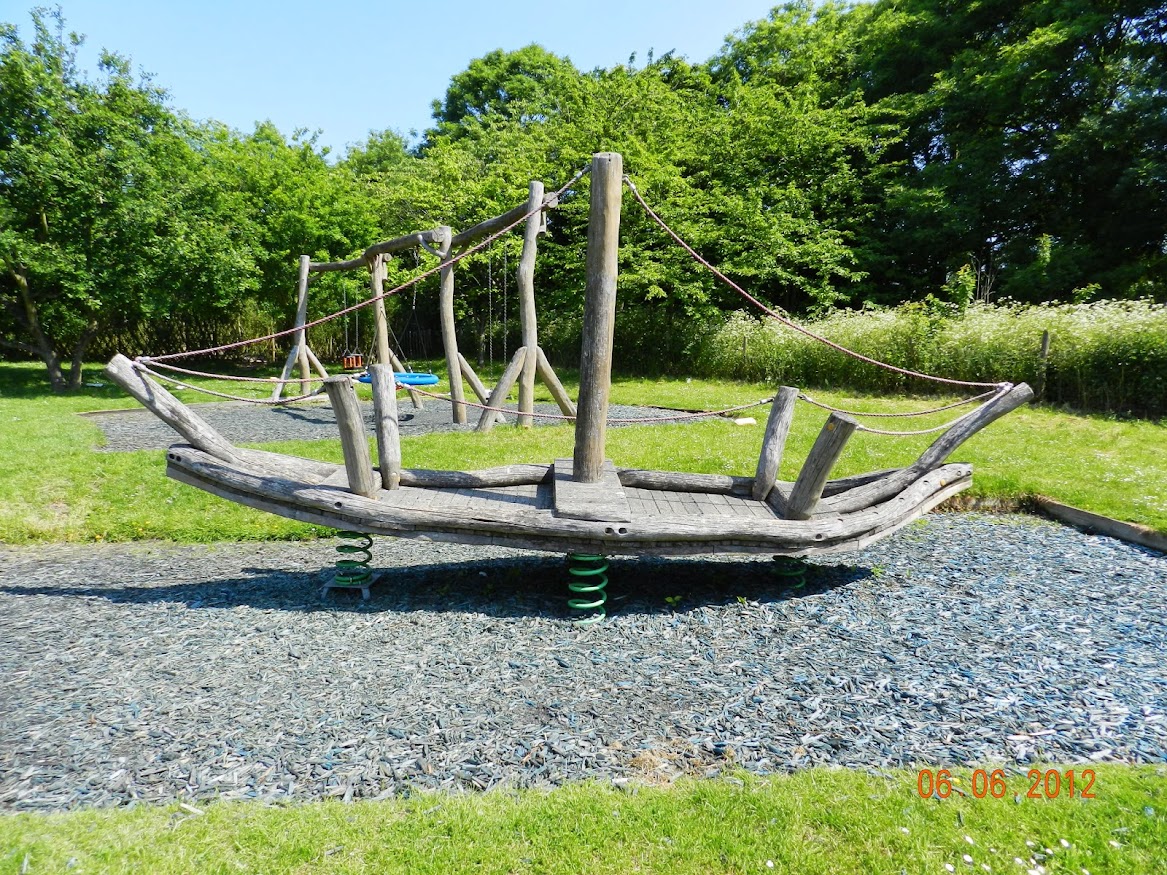 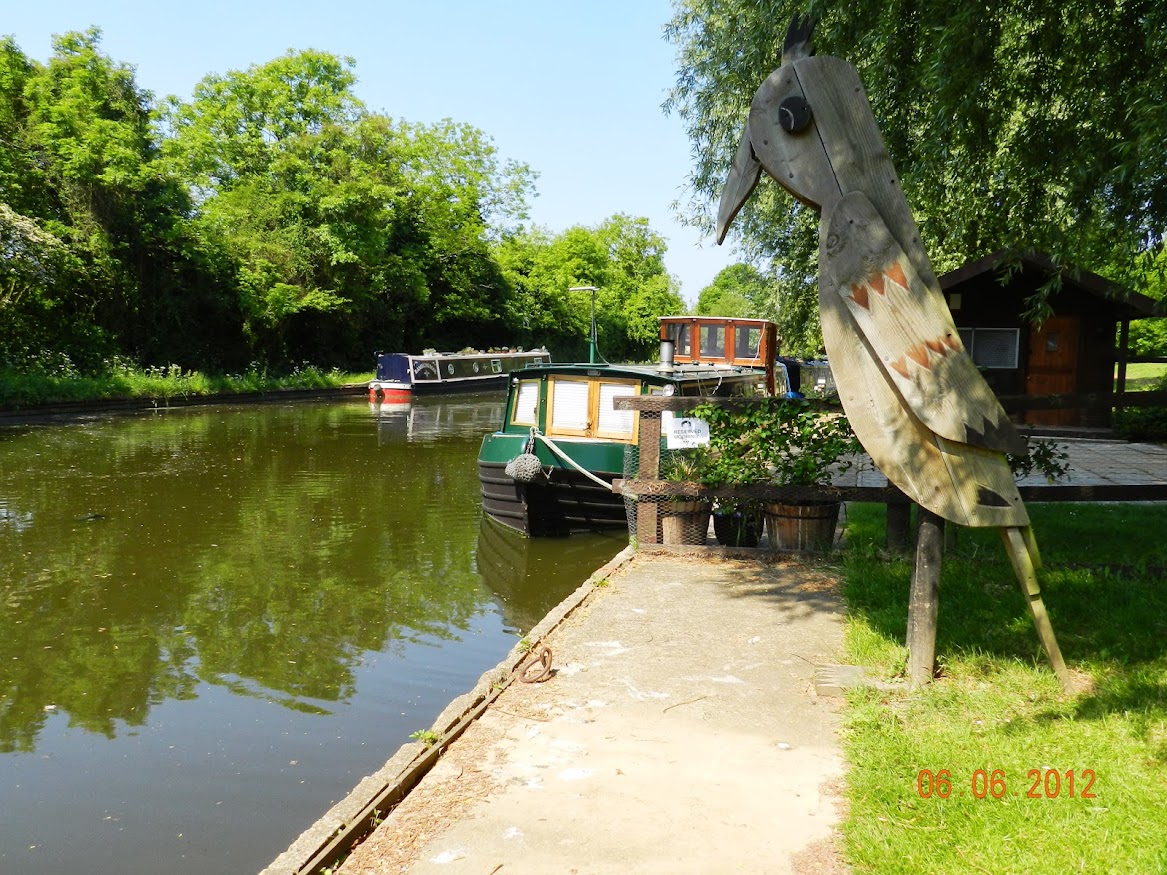 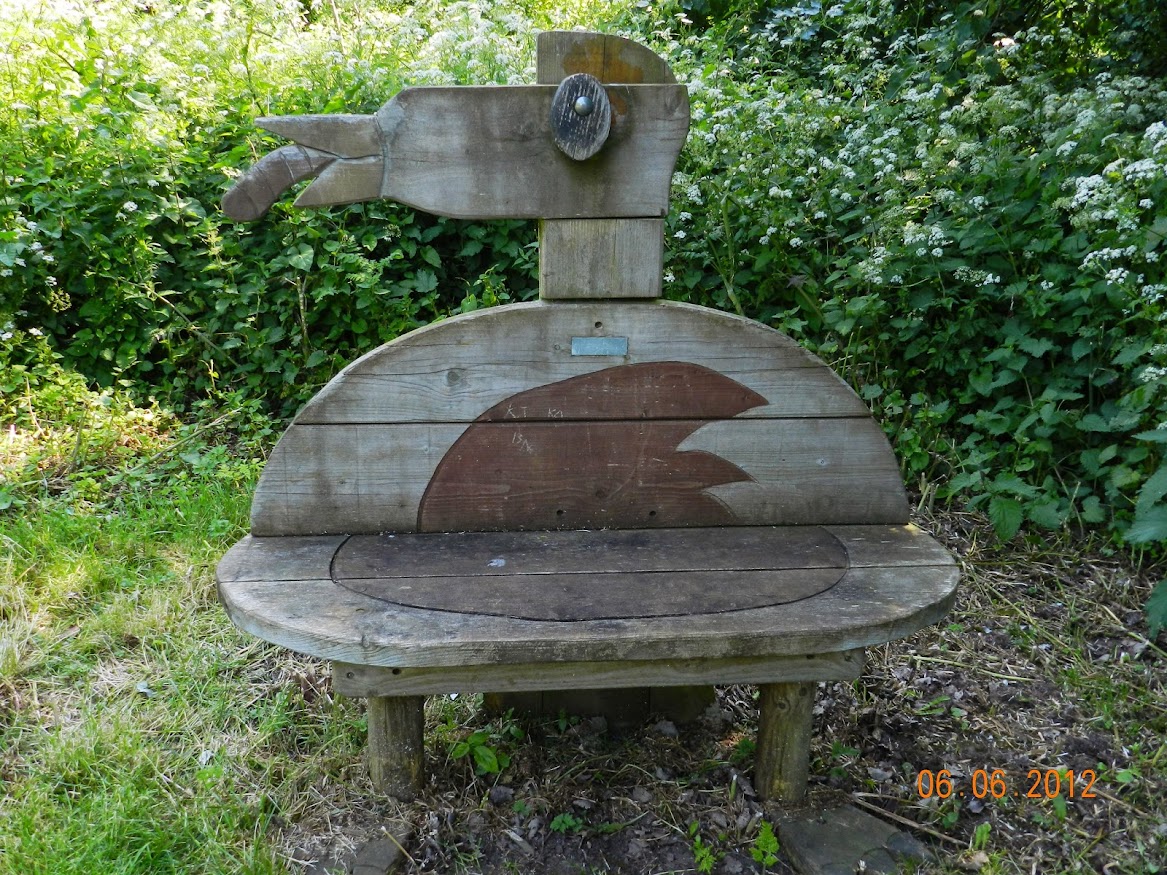 Turn left through a car park to the 19th century former farmhouse and
farmyard. The visitor centre has information panels, leaflets and toilets. On leaving the visitor centre, instead of retracing your steps, continue up
through the gate into the wood. If you do not wish to make the diversion to the Visitor Centre, continue past the entrance and turn right into the wood to start the steep climb up Horsenden Hill. Follow the signs upwards and at a major path junction, turn right to continue the climb up steps to reach the summit of Horsenden Hill: 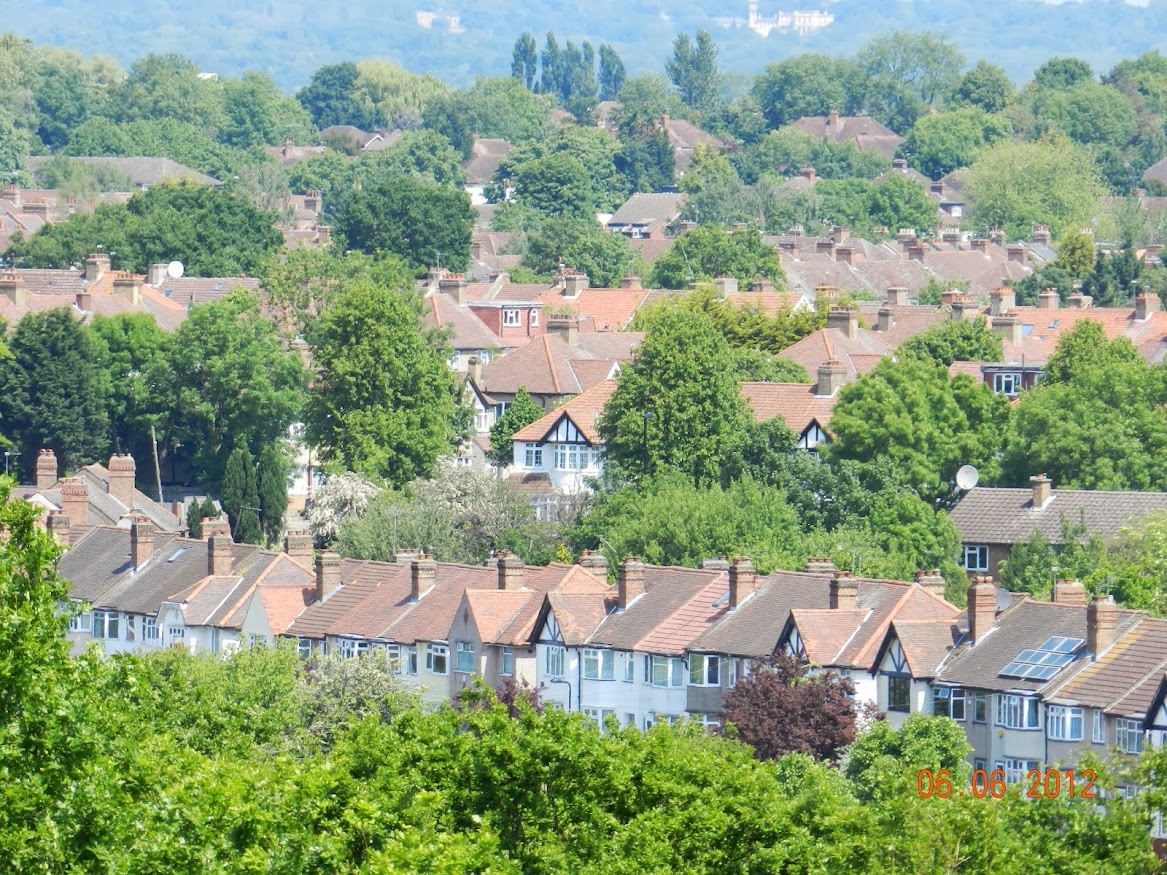 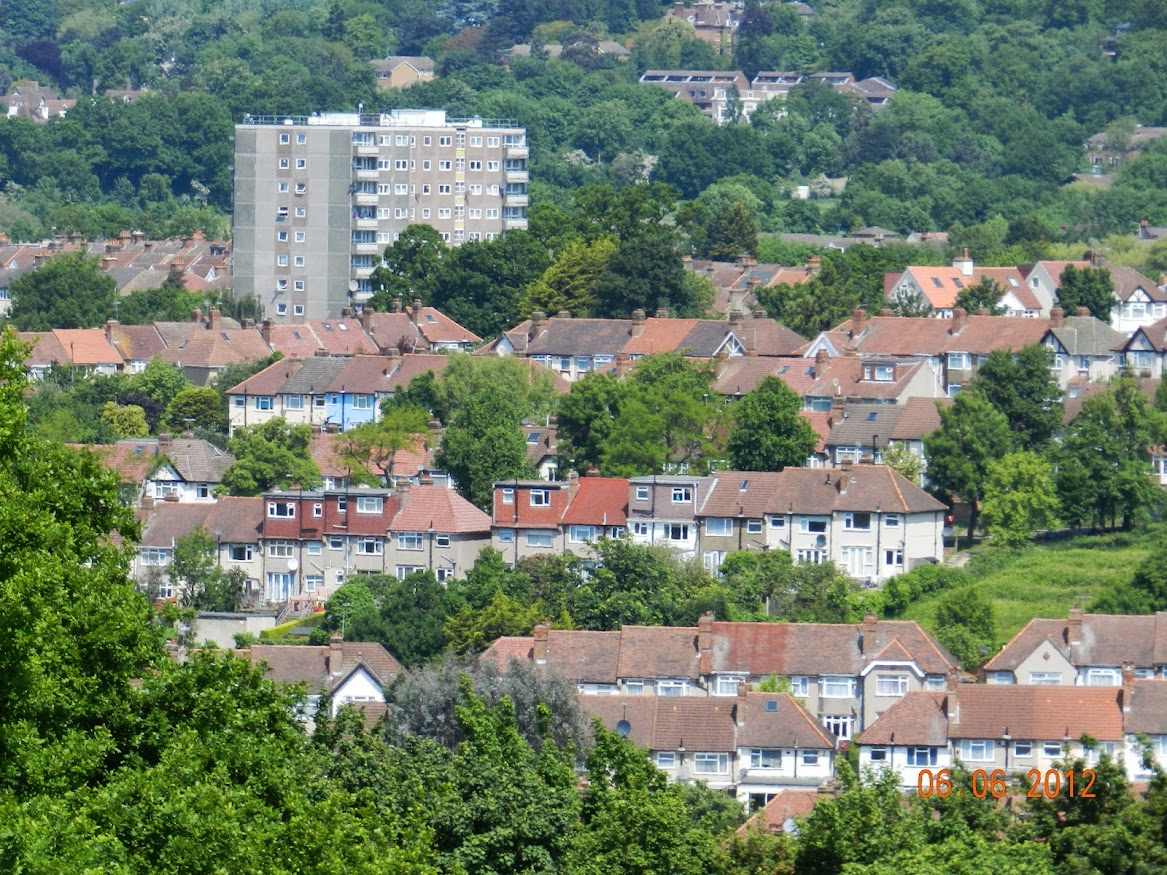 Horsenden Hill at around 275 feet (84m) provides one of the finest
natural viewpoints in London and is a popular kite-flying spot. On a clear
day, looking west, you can see the Chiltern Hills, while to the north lies
Harrow-on-the-Hill with the spire of St. Mary’s Church. During World War I, the summit came to the fore with the siteing of an anti-aircraft gun pulled by a horse – a defence against German airships. 2,500 years ago, Iron Age people settled on Horsenden Hill leaving behind large amounts of pottery. The Iron Age settlement is now a Scheduled Ancient monument. A major change in the area occurred in the 1800s with the opening of the Paddington arm of the Grand Junction Canal. This enabled hay, the area’s main product, to be shipped into London in great bulk and in return London sent Horsenden ‘Mack’ – an unpleasant mix of street sweepings, fish and meat offal and horse droppings – to be used as manure for the fields.

Keep ahead across the summit, where a disused reservoir lies beneath the surface. Pass the Capital Ring signpost and continue on the same line on grass towards trees. Fork half left downhill into Horsenden Wood with its beautiful old oak trees, 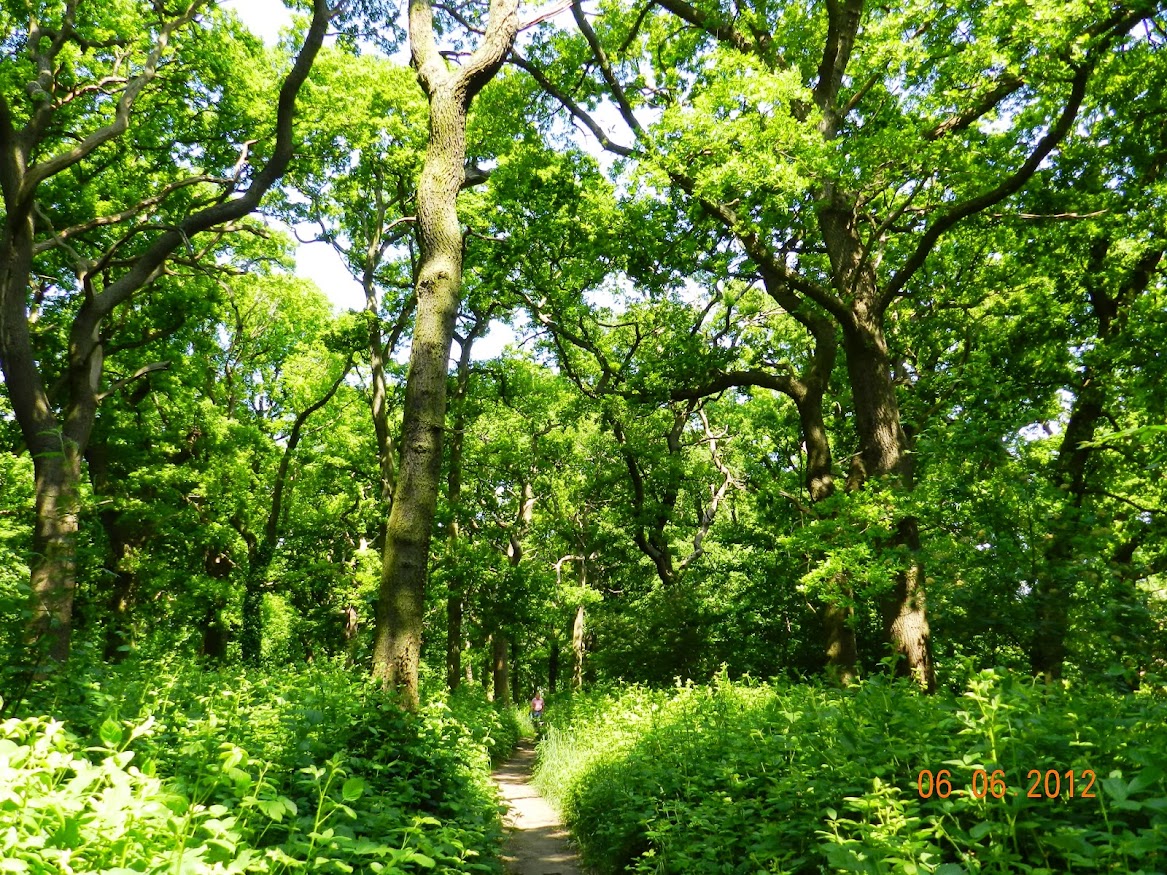 then bear half right beside some tree trunks that line your rather indistinct path; keep a sharp eye out for the Capital Ring marker. At a tarmac footpath, turn right for 40m, then left on another indistinct path, keeping parallel to the garden fences over to the right. The path emerges from the wood at a major path junction by the end of Whitton Drive. (Sudbury station can be reached from here - turn right along Whitton Drive, cross Whitton Avenue East then turn right and follow the signs to Sudbury Town Station) Continuing along the Capital Ring, turn left along the tarmac path that follows a hedge and ditch. At the end, by the Ballot Box pub, turn right along busy Horsenden Lane North to pass some shops. Where Horsenden Lane swings left, by the brick-built All Hollows Church, cross the road and keep ahead along the opposite side of Melville Avenue. At the main road (Whitton Avenue East), turn left to cross at the traffic lights, then turn right and left into Ridding Lane. Follow Ridding Lane as it swings left and continues as a broad, tarmac footpath to rejoin Greenford Road. Turn right over the Piccadilly Line bridge, then cross over to Sudbury Hill Station and turn right past the shops. At Sudbury Hill Harrow Station (opposite the Rising Sun pub), turn left along South Vale for 300m. You will pass several football pitches on the right. At the sharp left bend, cross over to a grassy area with a bench. Keep ahead to follow a leafy, rather uneven footpath steeply uphill among trees. Shown on maps as Green Lane, this is locally known as Piggy Lane. At the top, cross South Hill Avenue and keep ahead along the main road, Sudbury Hill. Just before Mount Park Avenue, cross at the refuge and continue along the right hand pavement, now in London Road. Where the main road bends left, keep ahead on London Road into Harrow-on-the-Hill. Continue past the village green. A little further on, a diversion sharp left down West Street 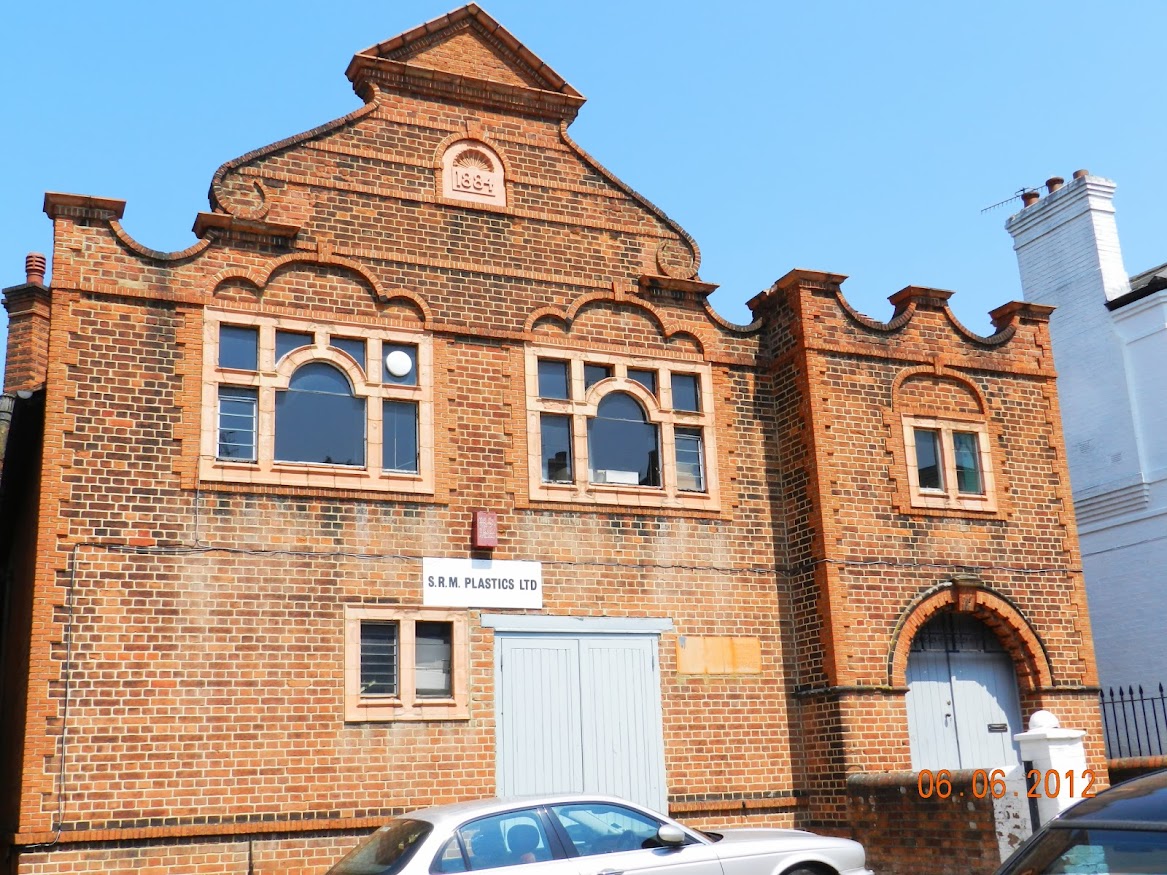 leads past the aptly named tea shop, Tea at Three, to the only remaining pub in the village, the Castle: 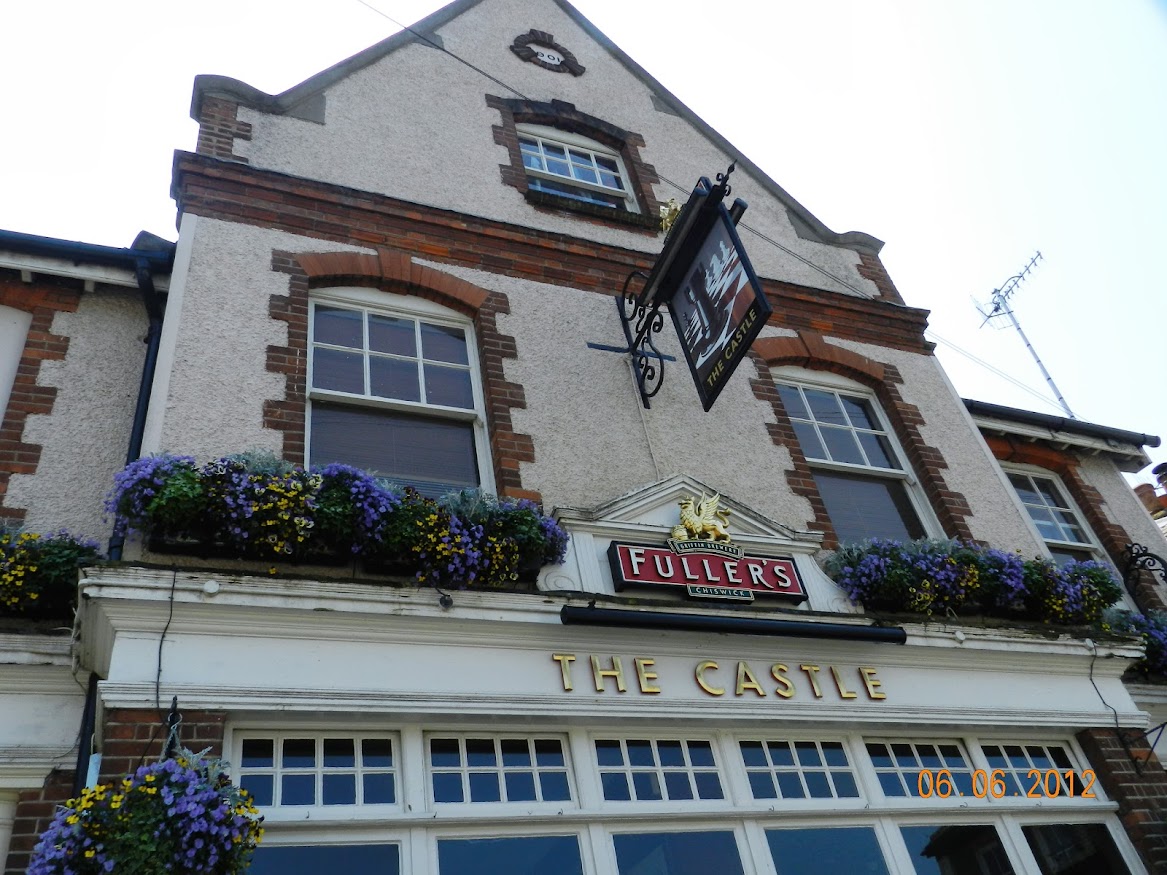 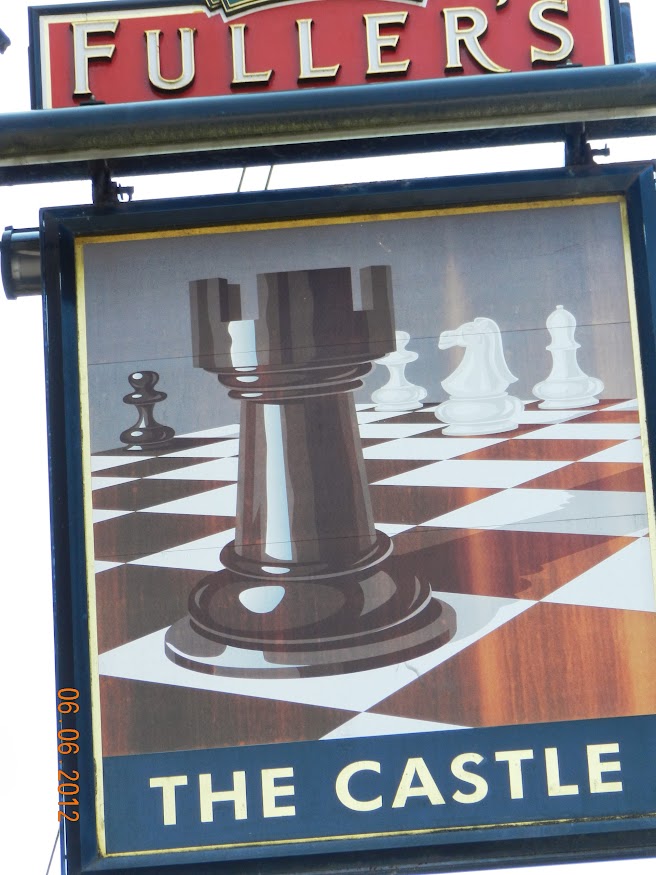 There is also a fine granite drinking fountain here. To reach Harrow on the Hill station bear left onto Church Hill. Go through the gate of St Mary’s Church and turn left along a tarmac path passing the church door. At a path junction turn right to descend to the end of a road called Roxborough Park. Shortly turn right along a fenced tarmac path and on reaching The Grove Open Space bear left down to the A404 Lowlands Road. Turn left to the traffic lights, cross and turn right, then left along Station Road to climb the steps up to Harrow on the Hill station.

Over the years, Harrow School has grown to occupy much of the village,
with buildings scattered in all directions. On Church Hill is the original school building; a plaque says it was finished in 1619. Harrow School was
established in 1572 by John Lyons, a local farmer and landowner. The
pupils (all boys) can often be seen scurrying between buildings, wearing
their distinctive straw boaters; there are 800 pupils spread around in 11
boarding houses in the village. As one of Britain’s foremost public  schools, over the years it has educated many leading notables, including Winston Churchill, Pandit Nehru, Lord Byron, Richard Brinsley Sheridan and Anthony Trollope. Lord Byron was at Harrow School as a boy and his little daughter Allegra (by Clair Clairmont) is buried in an unmarked grave outside St Mary’s Church, very near to the south porch; a plaque commemorates the place. 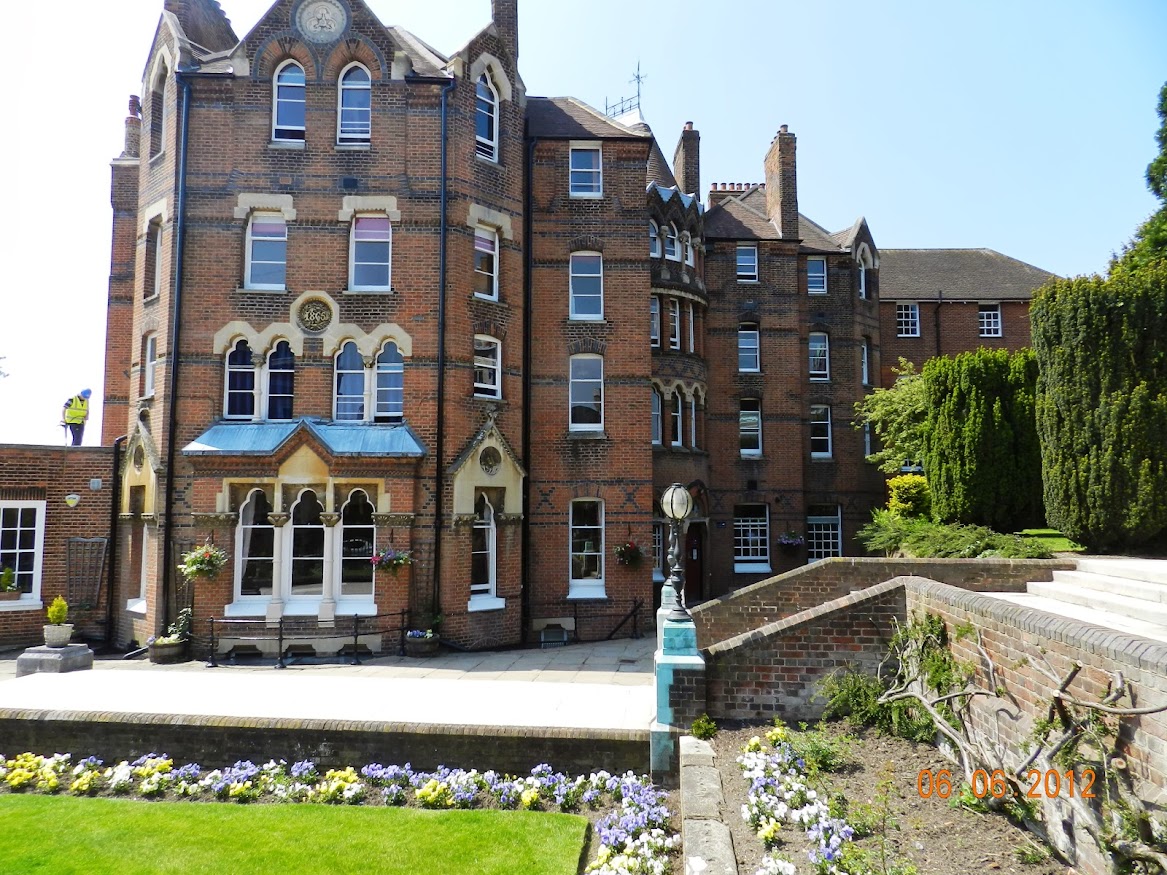 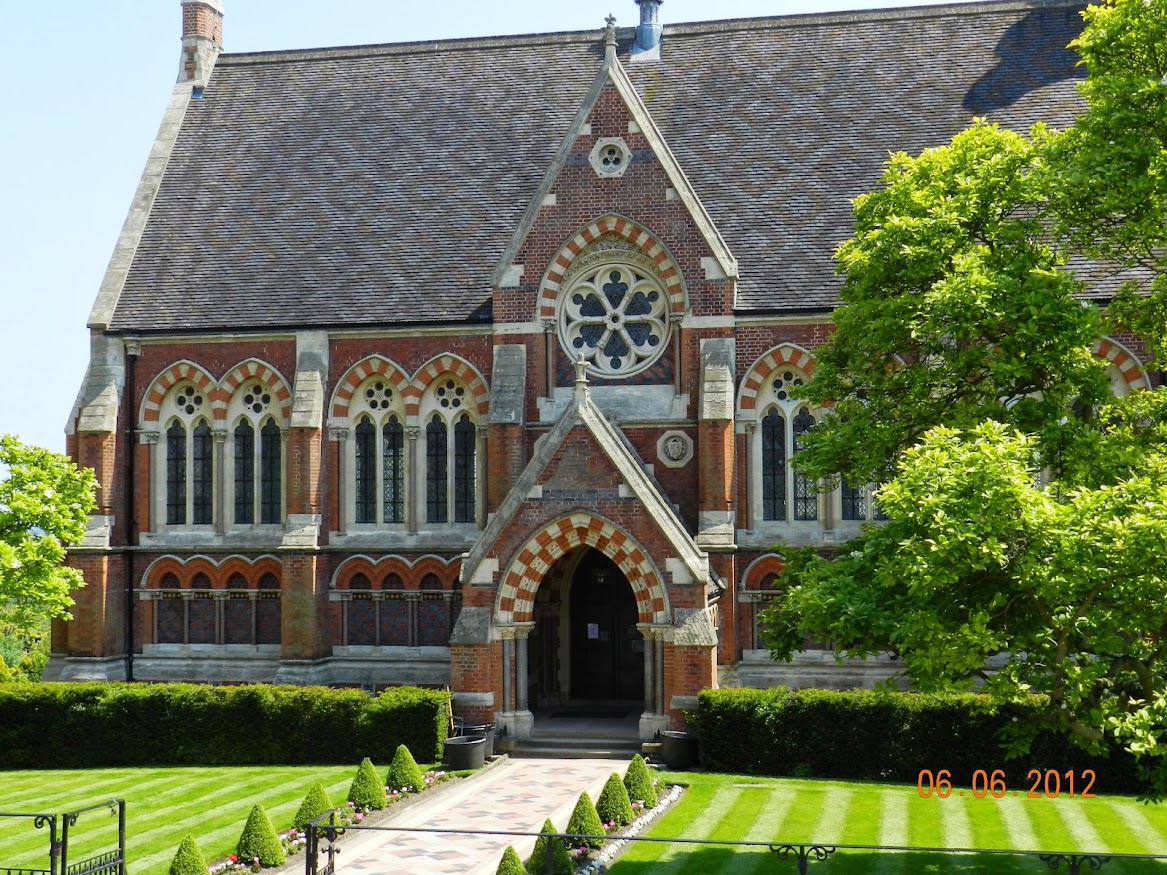 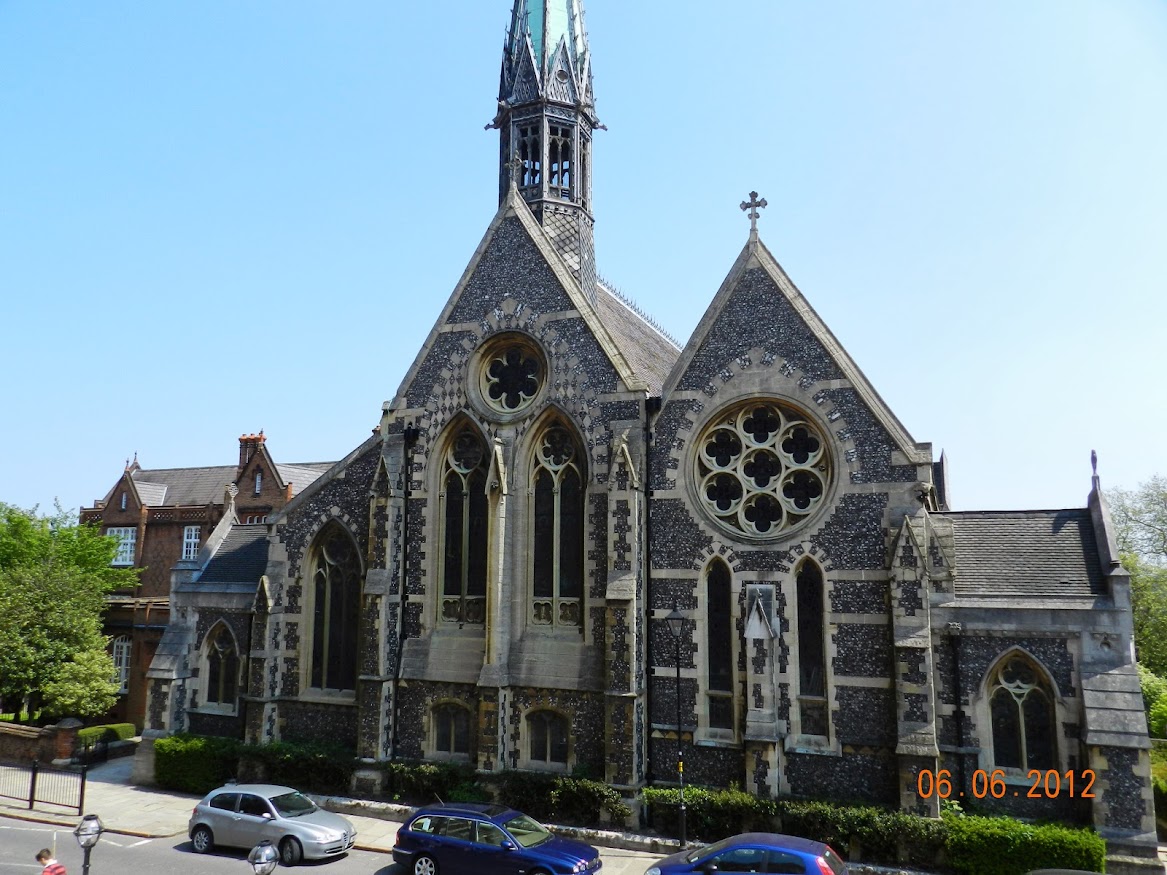 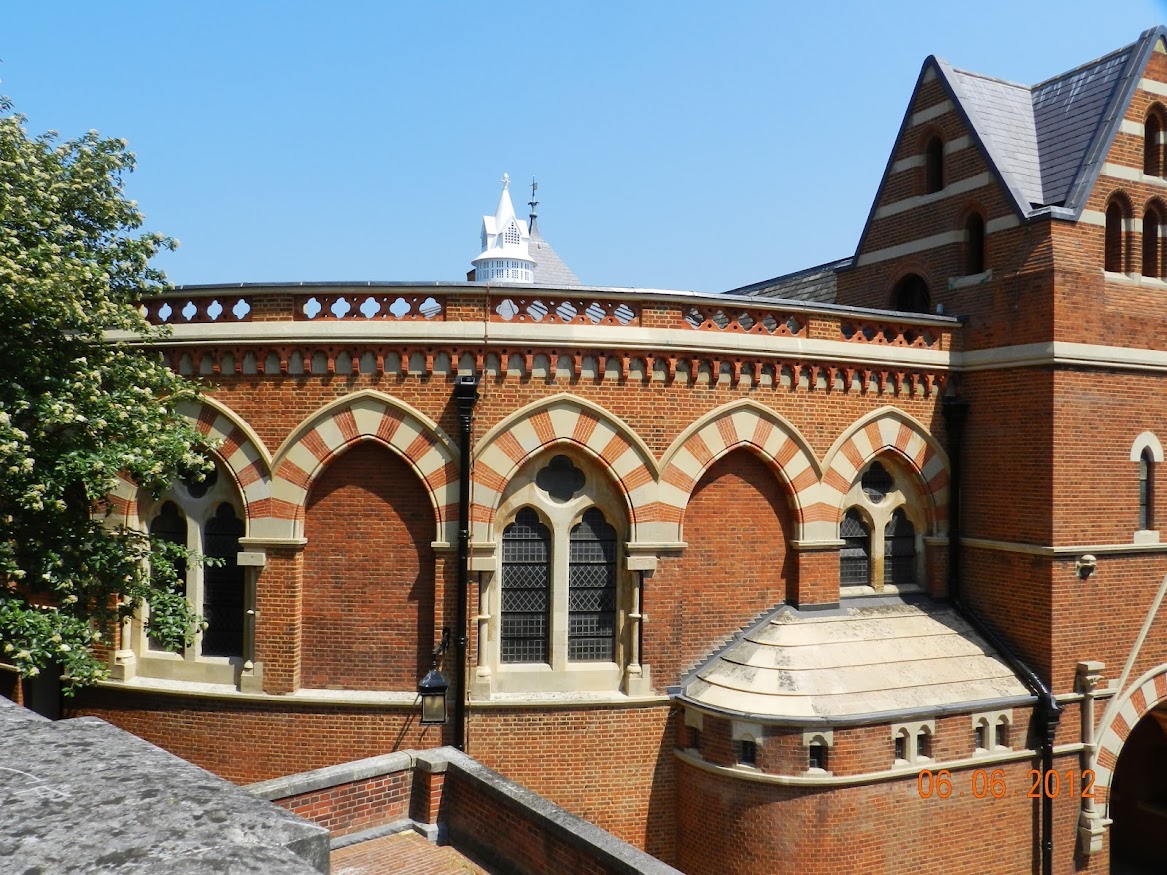 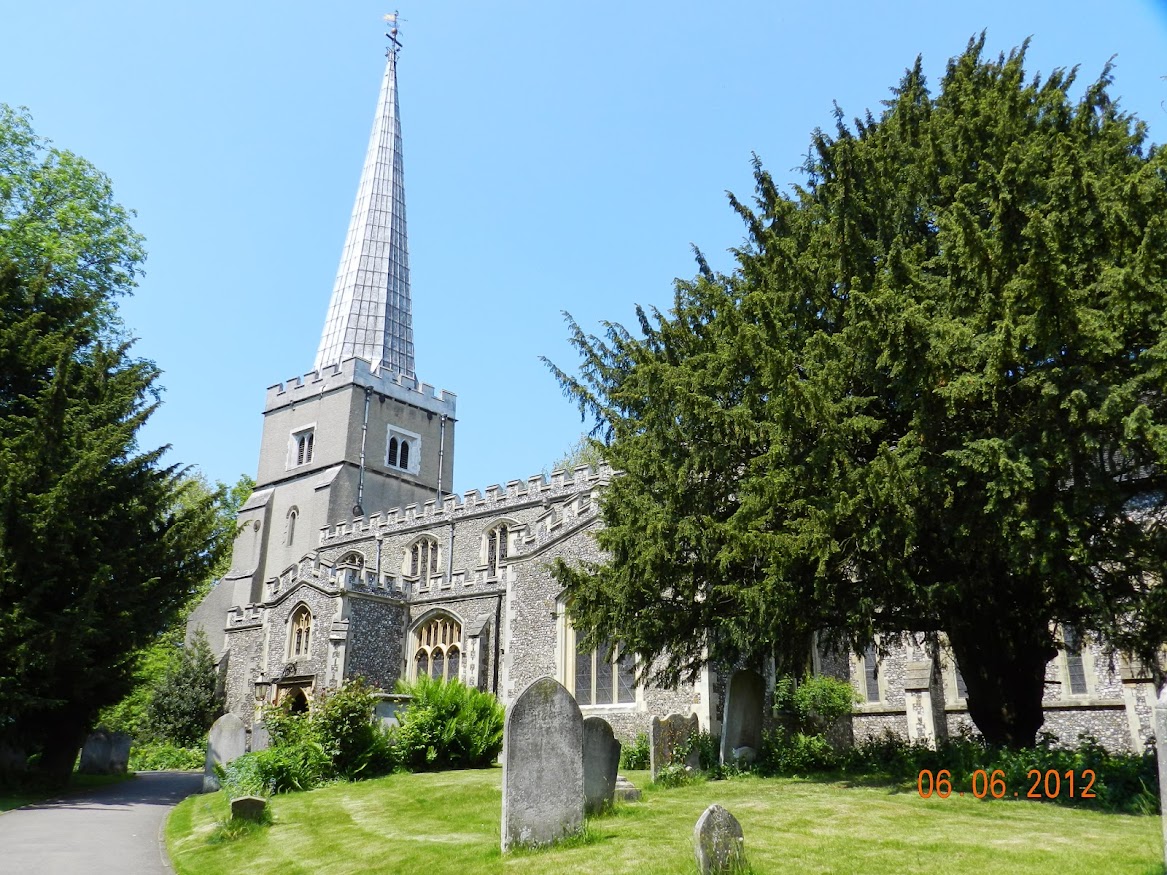 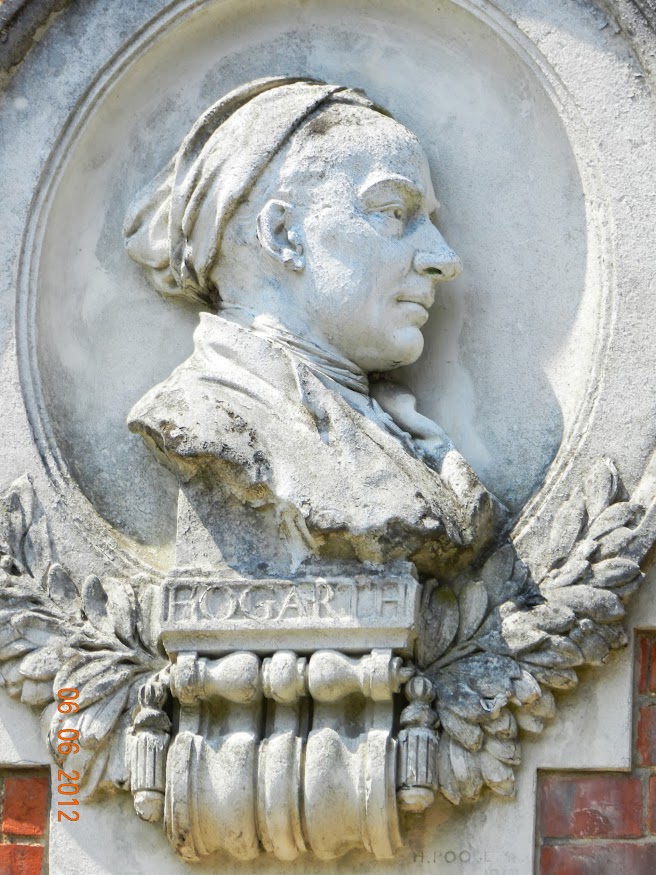 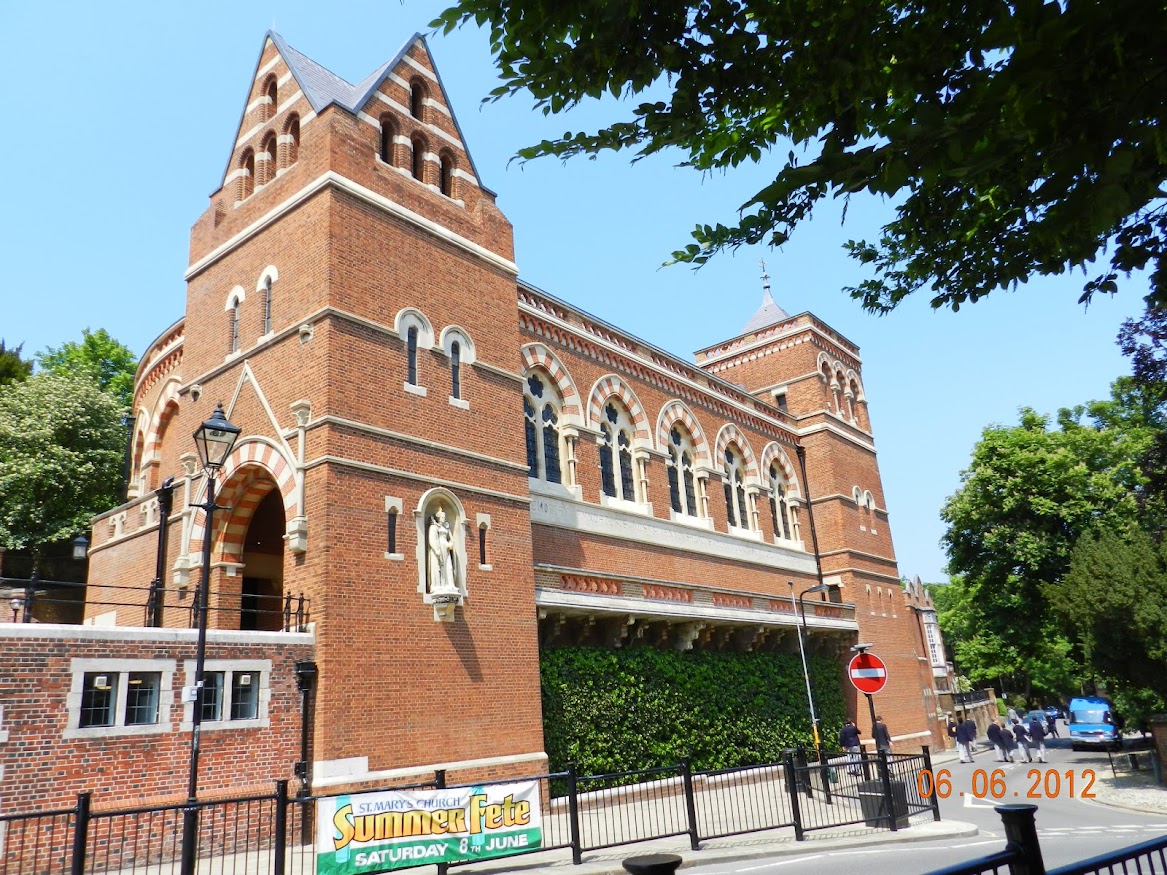 To continue on Section 9 keep ahead along the High Street passing Harrow School’s library and chapel on your right, while on your left lies the impressive Gothic-style Speech Room. Turn right down the steep Football Lane, between more school buildings. Where the lane bears right, by the school’s music faculty, keep ahead on a track down to the school playing fields: 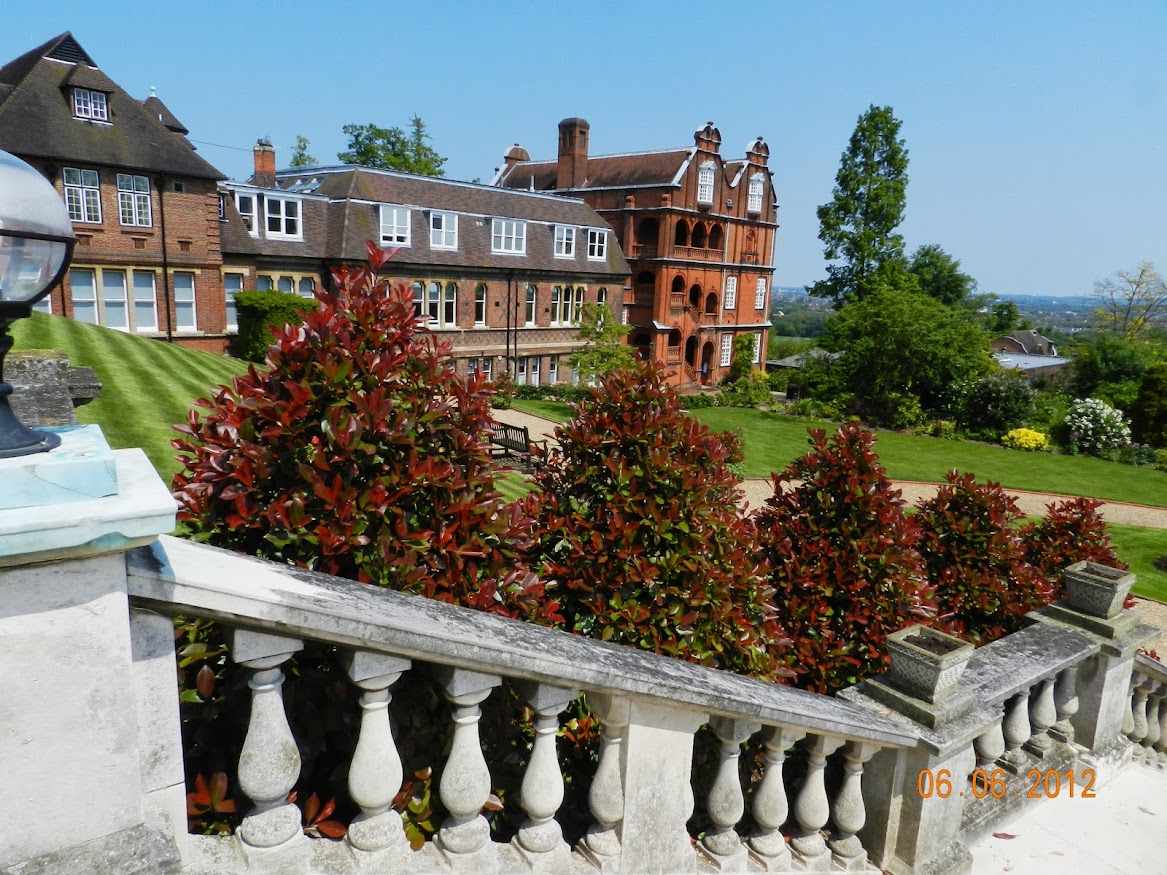 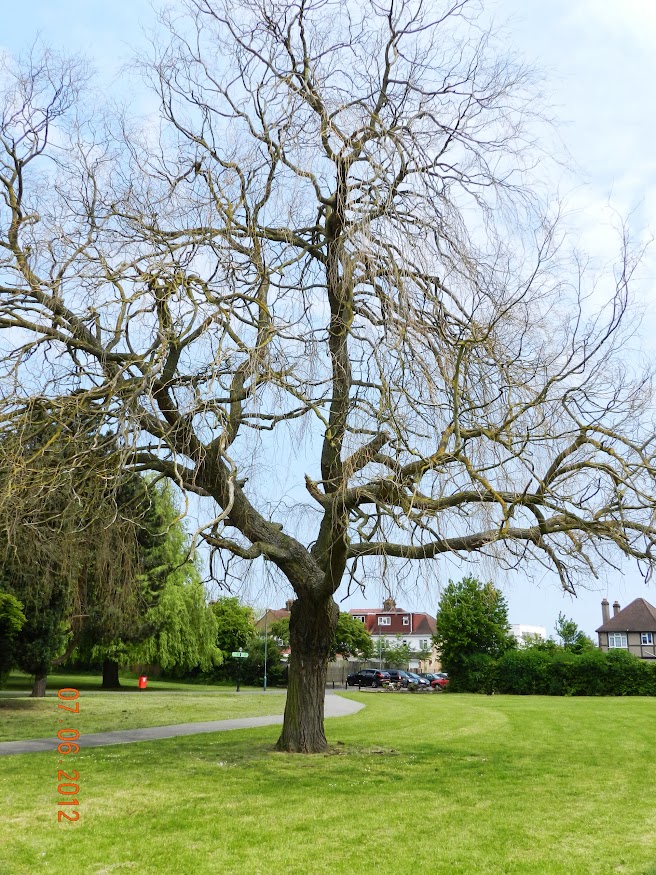 The public right of way continues ahead across pitches, but the Capital Ring follows an alternative permissive route by agreement with Harrow School, and this is waymarked. Turn left along a track, then turn right beside a row of trees. In 100m turn half left and follow the waymarks across grass beside more pitches to Watford Road, after crossing the only stile on the Capital Ring.

Cross the road and bear half left into a wood, along the Ducker Path –
taking its name from Harrow School’s swimming pond, which was once
located here; the path is quite uneven. Follow the earth path around to the right, now with the extensive buildings of Northwick Park Hospital on your left. It incorporates St Mark’s Hospital, one of the world’s leading research centres for alimentary disorders. Go through a gate into Northwick Park Golf Centre, ( Note: there is no signpost in the entrance to the Golf Park - indicating it is the Nortwick Golf Park !!!). and follow the MOST LEFT path along the low fence path, stay close to the high chain-link fence and keep it on your right hand side; it gives some protection from stray golf balls. This path is quite rough and muddy, but do not be tempted to follow the track inside the golf course as you will not be able to exit at the other end. At the far end, you go through a gate to enter Northwick Park itself. For Northwick Park Station, turn left along the tarmac path.

The Capital Ring goes right, keeping ahead at the pavilion car park and along a drive. Just before the park exit, turn left on grass and follow the right-hand edge of a playing field. Just before the end, turn right to leave the park into Nathans Road then turn left for South Kenton Station subway and station.