From Streatham Common to Wimbledon Park - Capital Ring Section 5. (with extension of 1-2 hours to Clapham Common)

Introduction: Much of this section is beside roads, but the route goes
through some interesting and leafy residential streets as well as Tooting Bec and Wandsworth Commons.

The walk is entirely level on tarmac paths or pavements, much of it beside roads; there is one steep footbridge with steps.

There are public toilets at Streatham Common, Balham and Earlsfield.

Follow the route with the distinctive Big Ben Capital Ring signs. There are
bus stops and train and underground stations at Streatham, Streatham
Common, Balham, Wandsworth Common, Earlsfield and Wimbledon Park,
as well as buses along the route.

Directions: From Streatham Common Station turn left along the approach road and continue ahead along Estreham Road to the footbridge, where Section 5 Walk of the Capital Ring starts.

Follow the railway line. At the bend, turn left through the subway to Potters Lane, then turn right along Conyers Road. On your left the odd mosque-like building is Thames Water’s Streatham Pumping Station, built in 1888: 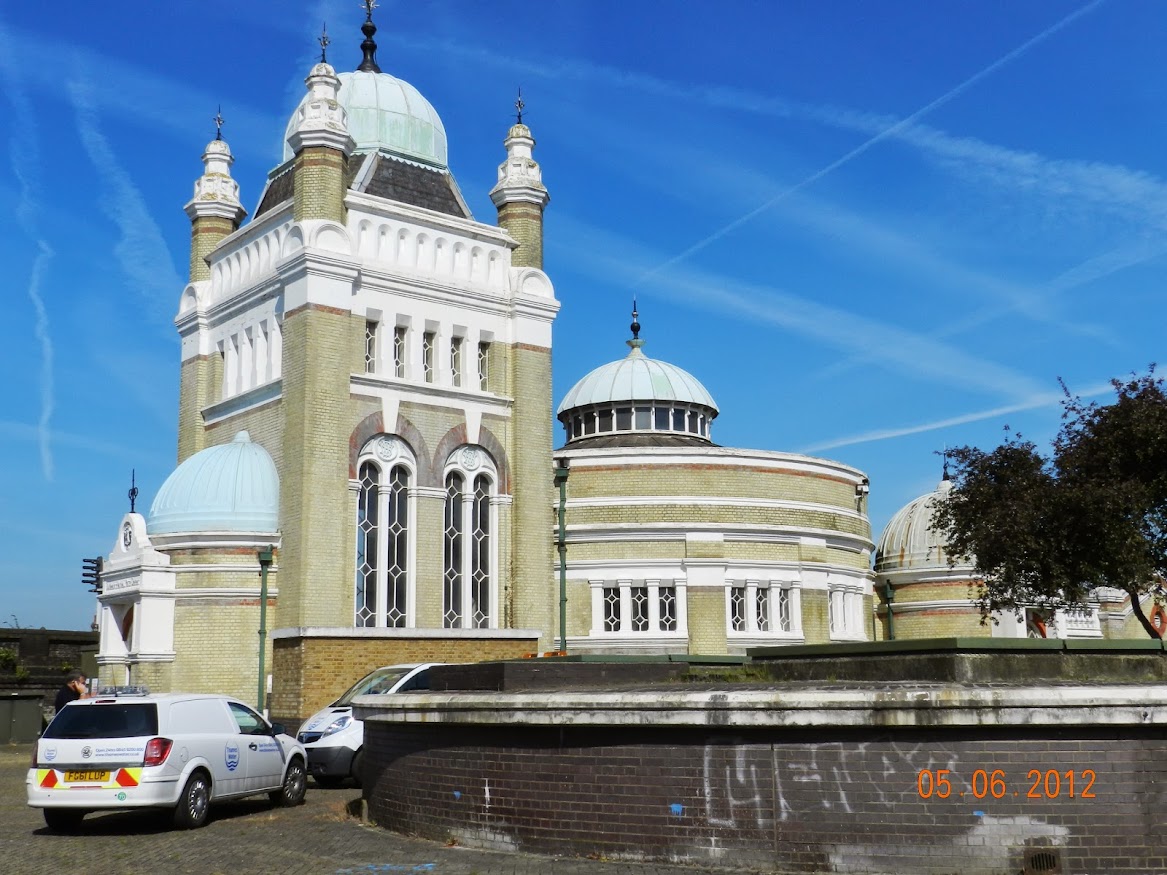 Cross Mitcham Lane and keep ahead along Riggindale Road. At the end
bear left on to the A214 Tooting Bec Road, and after going over the railway line, cross the road at the traffic lights and go to the entrance to Tooting Bec Lido. Tooting Bec Lido has one of the largest swimming pools in Europe holding a million gallons of water. It was opened in 1906 as a conventional pool, but rebuilt as a lido, Italian for beach, in 1936. Its iconic blue pools, diving boards and sunbathing areas have been used in films such as Snatch with Brad Pitt. Bear half right along a tarmac footpath to Tooting Bec Common. There is a lake just off to the left and further on a cafe to the left. Cross the road and continue ahead to the northern part of the common: 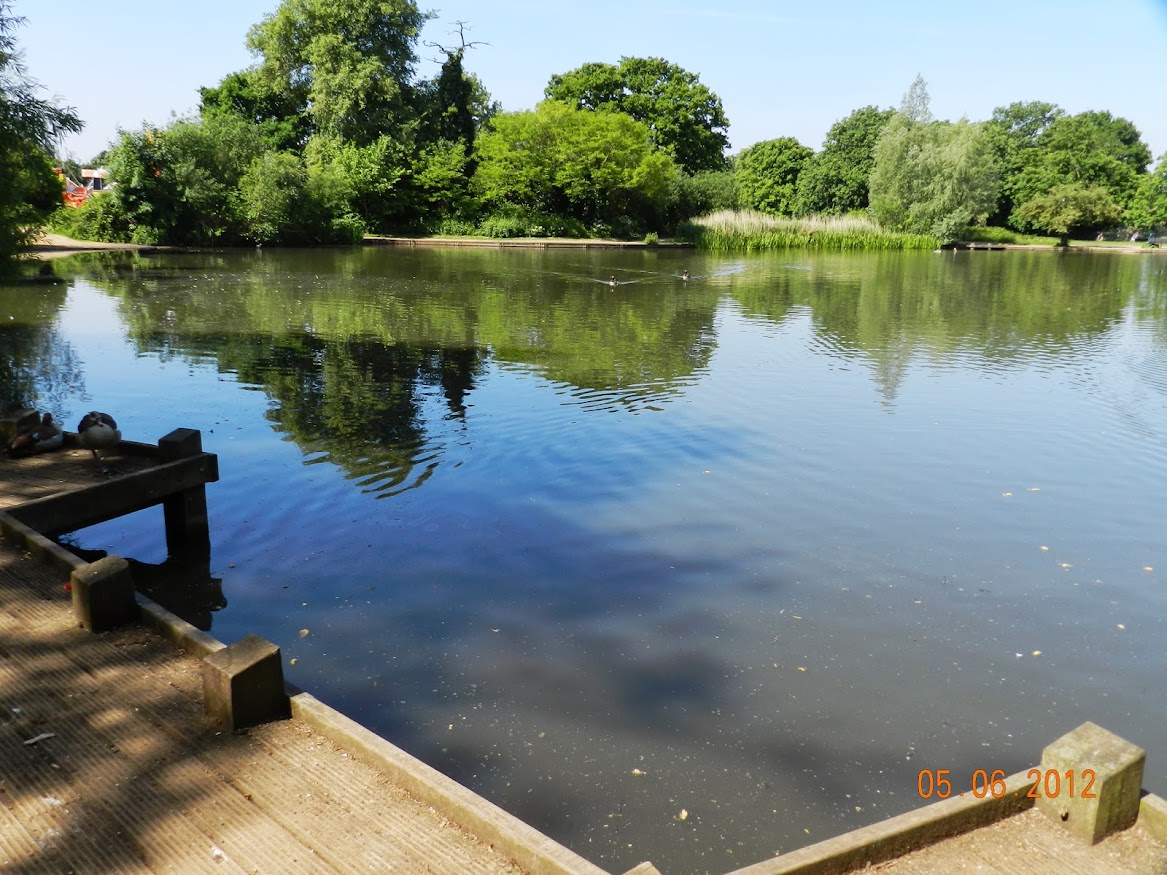 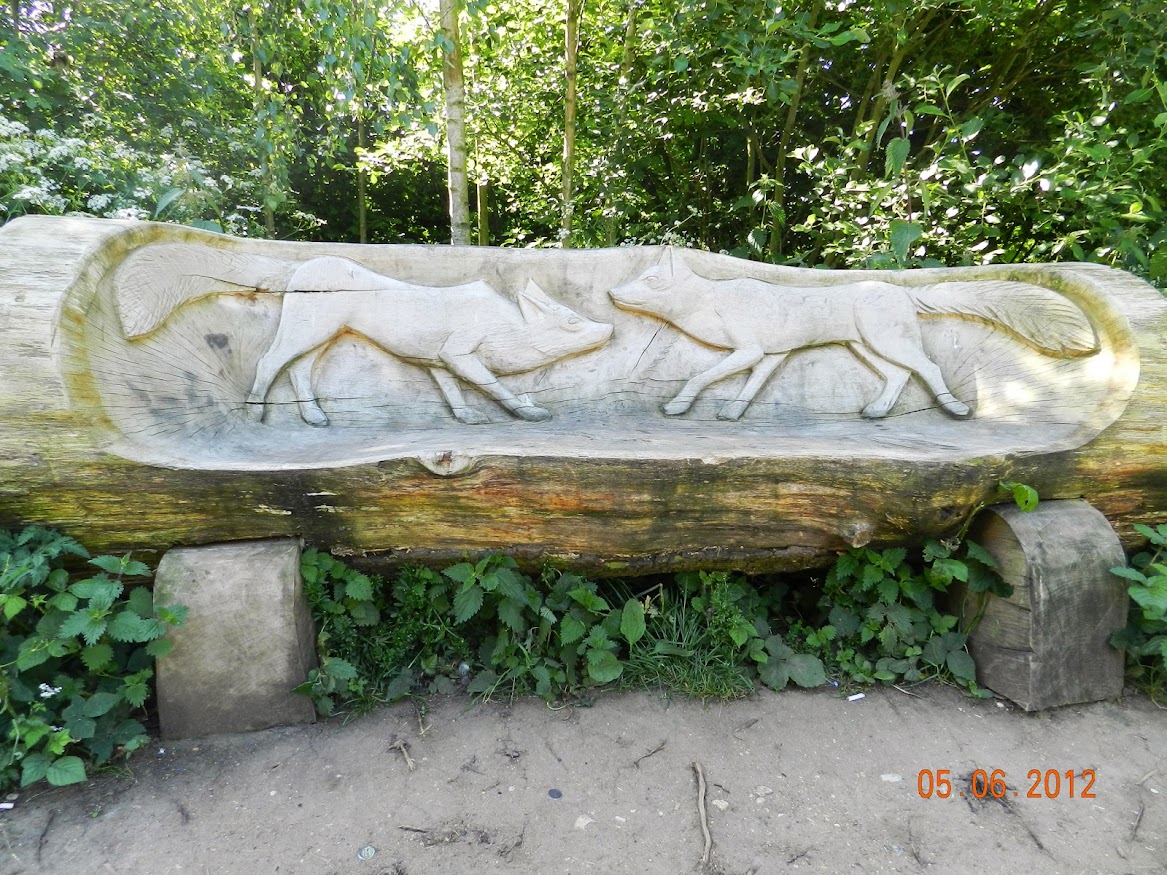 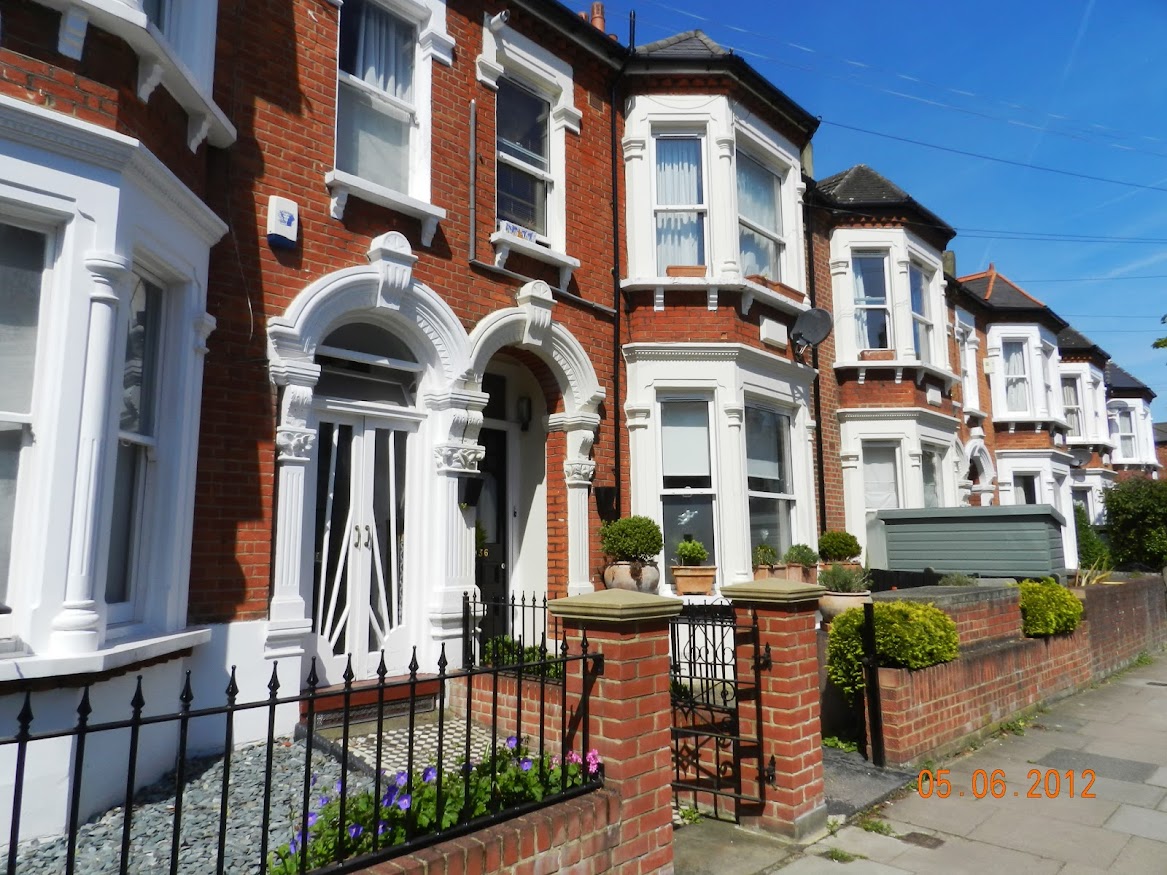 On the other side of the road is Du Cane Court. Its rather austere exterior
hides some of the most elegant apartment blocks in South London. These
date from the 1930s, the Art Deco period. Many celebrities have lived here and it was the location for the television series Poirot.

Turn right along Balham High Road and then left onto Balham Park Road;
keep straight on under the bridge for Balham Station: 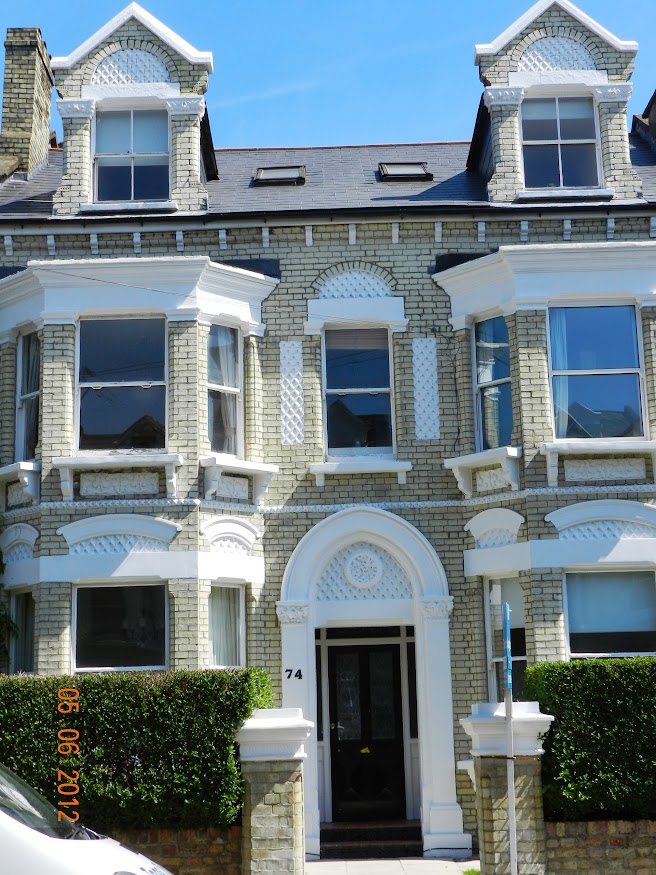 Cross Boundaries Road and keep ahead for 500 metres to a bend and then turn right along an alleyway leading to Wandsworth Common: 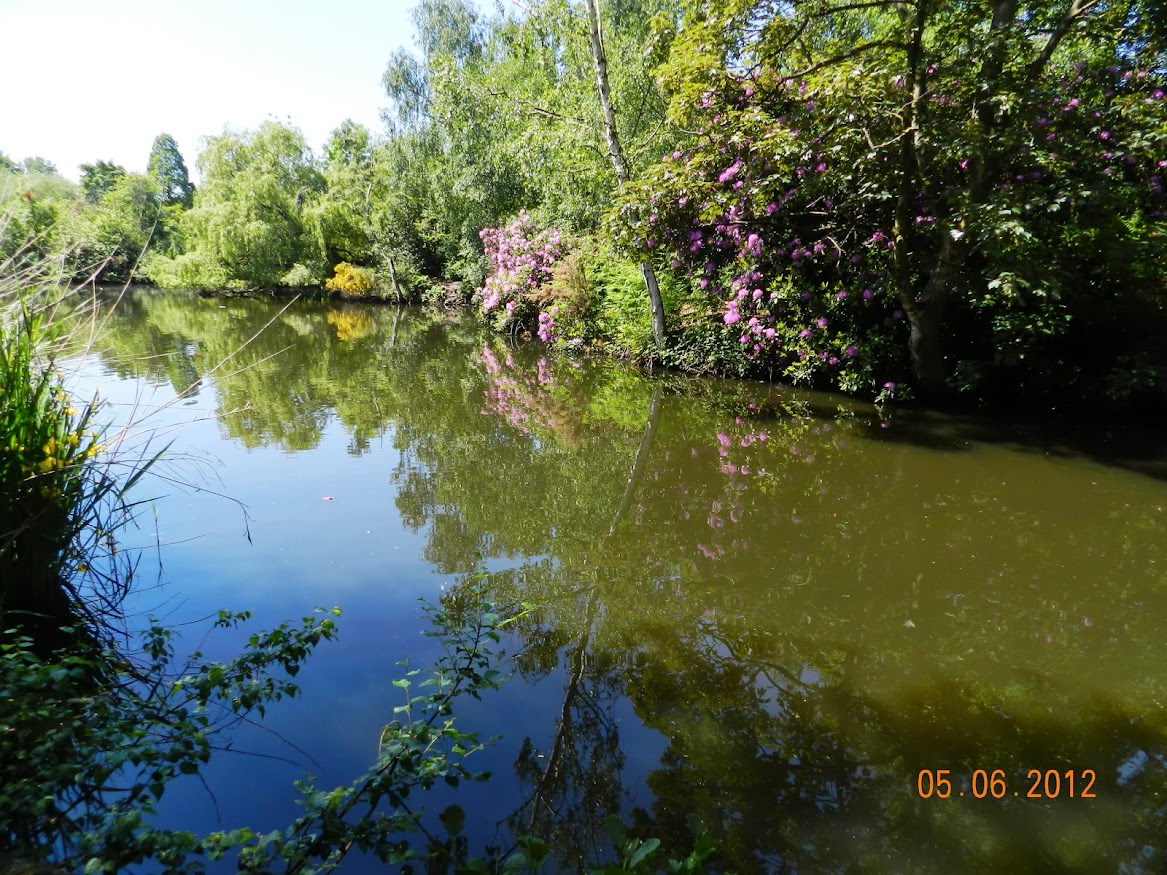 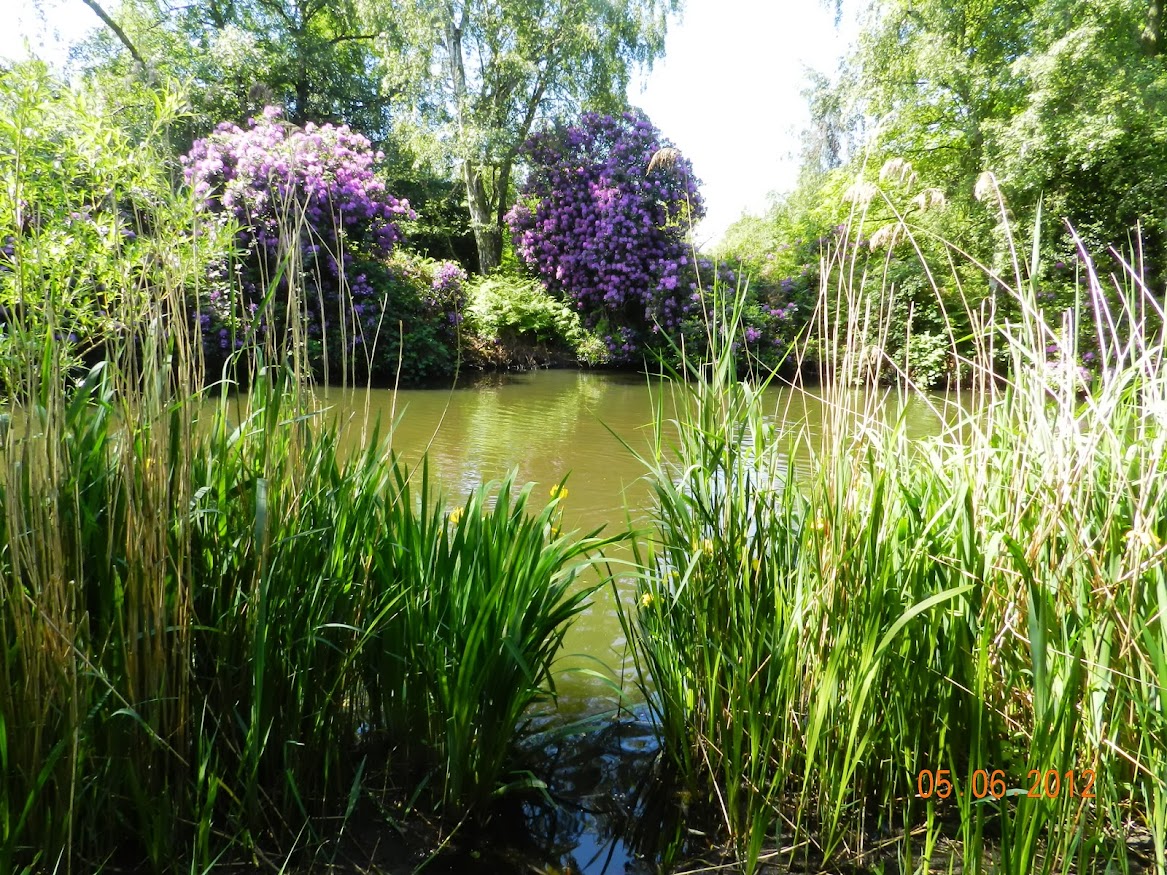 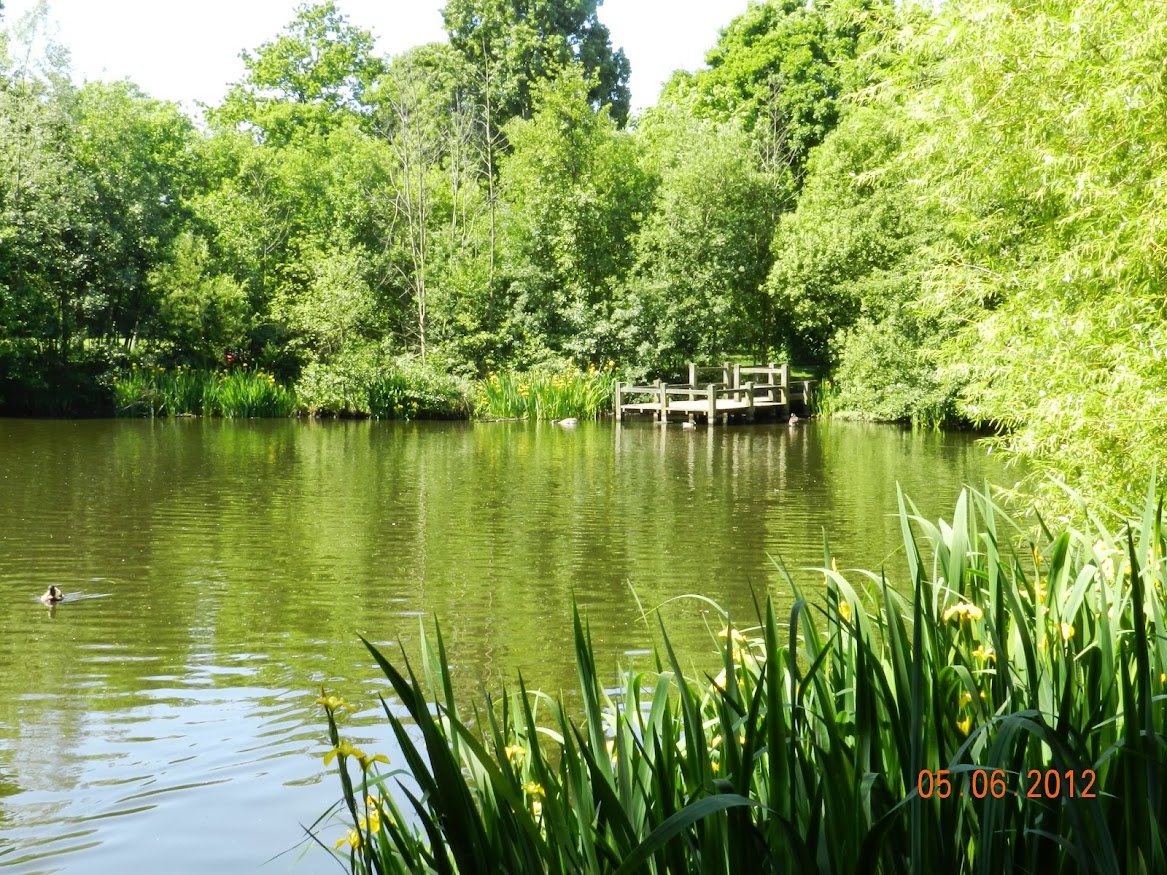 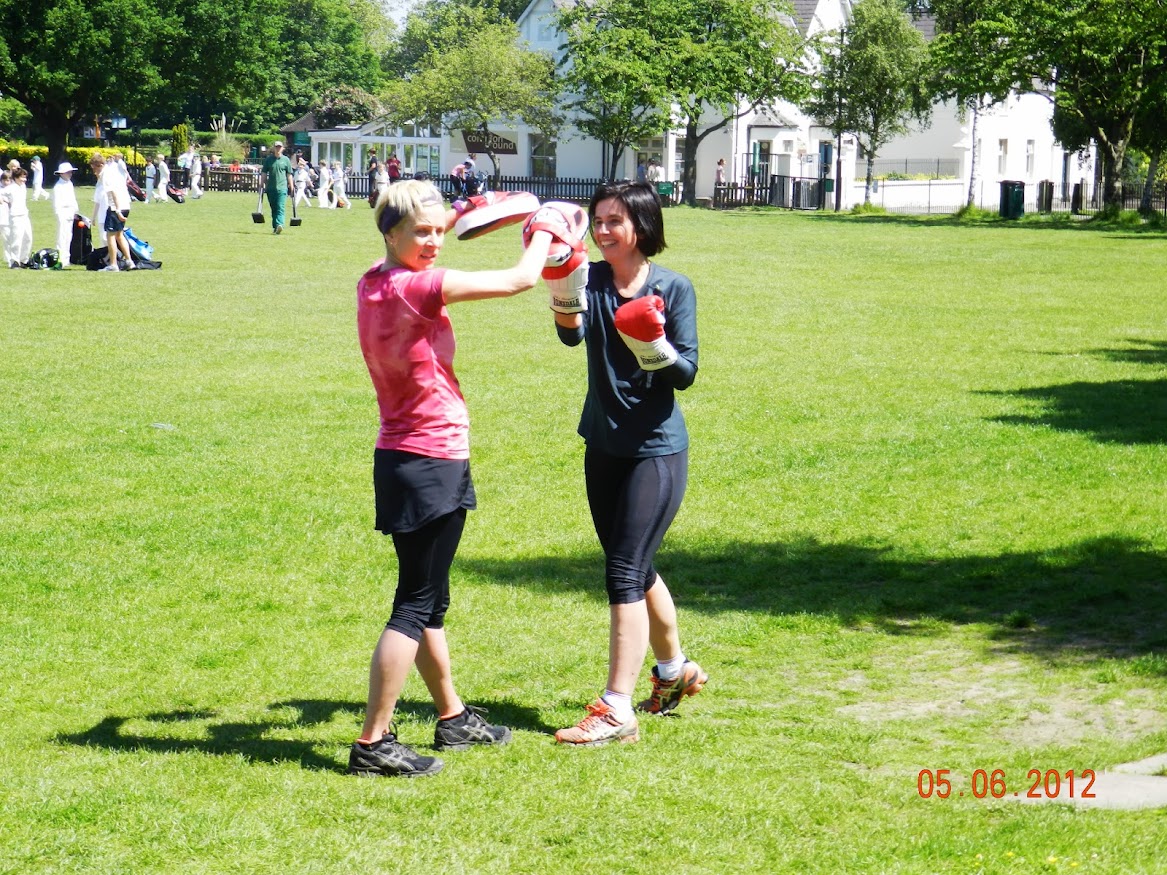 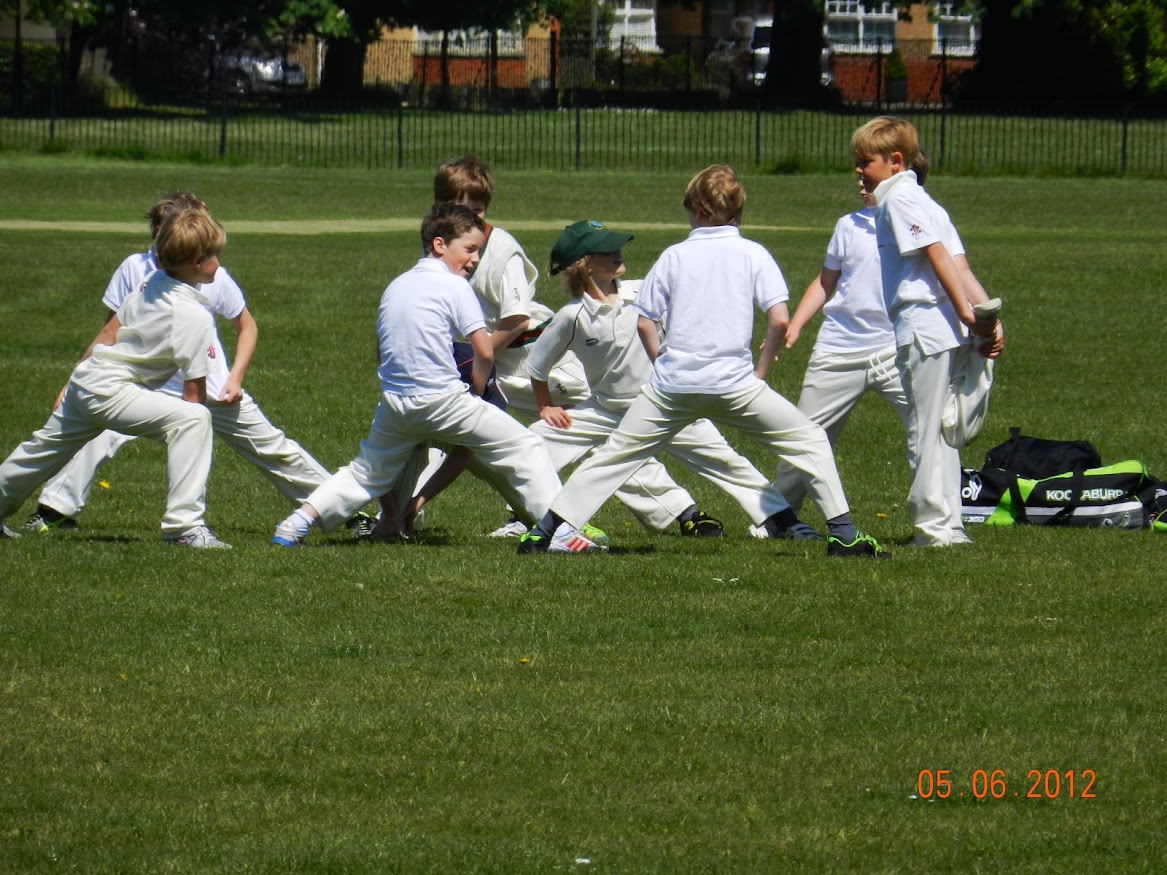 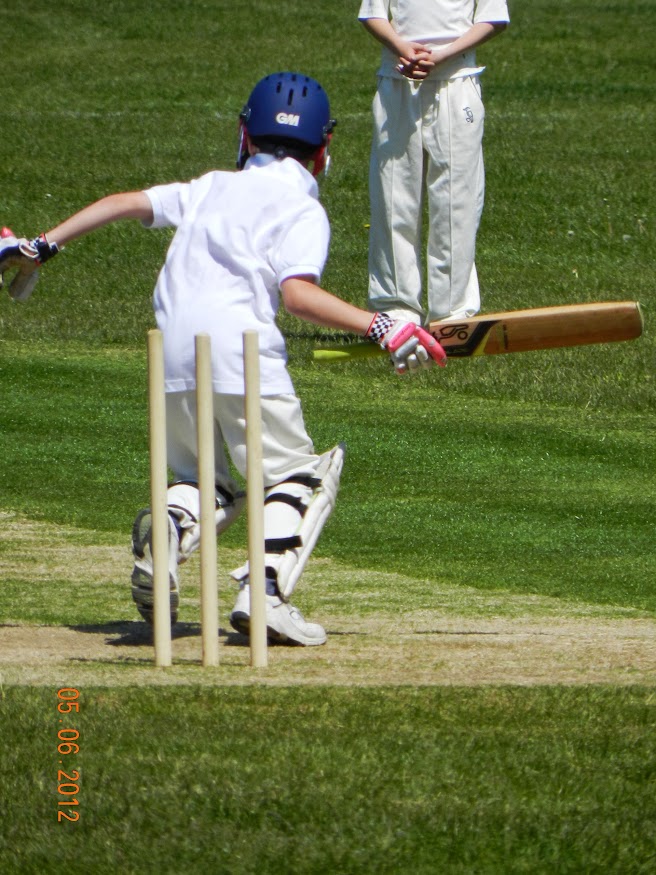 Follow the railway line and go through the ticket office of Wandsworth Common Station. Bear left beside the station approach to St James’s Drive, cross at the lights to pass the Hope Pub, then cross Bellevue Road. Bear half right to the next part of Wandsworth Common where you rejoin the railway line. There are toilets and a café in the former Neal’s Farmhouse, the cream building to your right which now houses park offices and a nature study centre.

Keep on the path and go ahead with a cricket pitch on your right. Just before the end, bear left up a short earth path to Trinity Road. Cross at the traffic lights towards the County Arms pub, then keep ahead along Alma Terrace. Ahead is the forbiddingly high wall of Wandsworth Prison, built in 1851 as the Surrey House of Correction. No photos allowed (exterior and interior) !.Oscar Wilde was imprisoned here in 1895 before being moved to Reading Gaol where he wrote his famous ballad of the same name. Great Train Robber, Ronnie Biggs, was here for two years before he escaped in 1965. Derek Bently was wrongly hanged here in 1953 for the murder of a policeman; the conviction was overturned in 1998.

Turn left along Heathfield Road to a mini roundabout and turn right into
Magdalen Road. This very straight road runs for three quarters of a mile
(1.2km), an alternative route follows a parallel path through the cemetery
(the gate at the end is narrow and not suitable for wheelchairs). There are also toilets in the cemetery.

After leaving the cemetery pass Earlsfield Public Library and then Earlsfield Railway Station is on the right. At the end of Magdalen Road, cross over and turn right at the lights and go under the railway bridge.

Around here you will cross the River Wandle, which gives its name to
Wandsworth. It’s one of the fastest flowing rivers in the London area with a drop of 200 feet in just ten miles. It powered many watermills which
produced flour, metal, leather, paper, textiles and even gunpowder. The
river is accompanied by the Wandle Trail.

At the lights turn left onto Penwith Road and then left onto Ravensbury
Terrace. Follow the road as it bends to the right, passing Haslemere Industrial Estate. Continue along on Haslemere Avenue which then becomes Mount Road. Turn left down Lucien Road and head into Durnsford Road Recreational Ground: 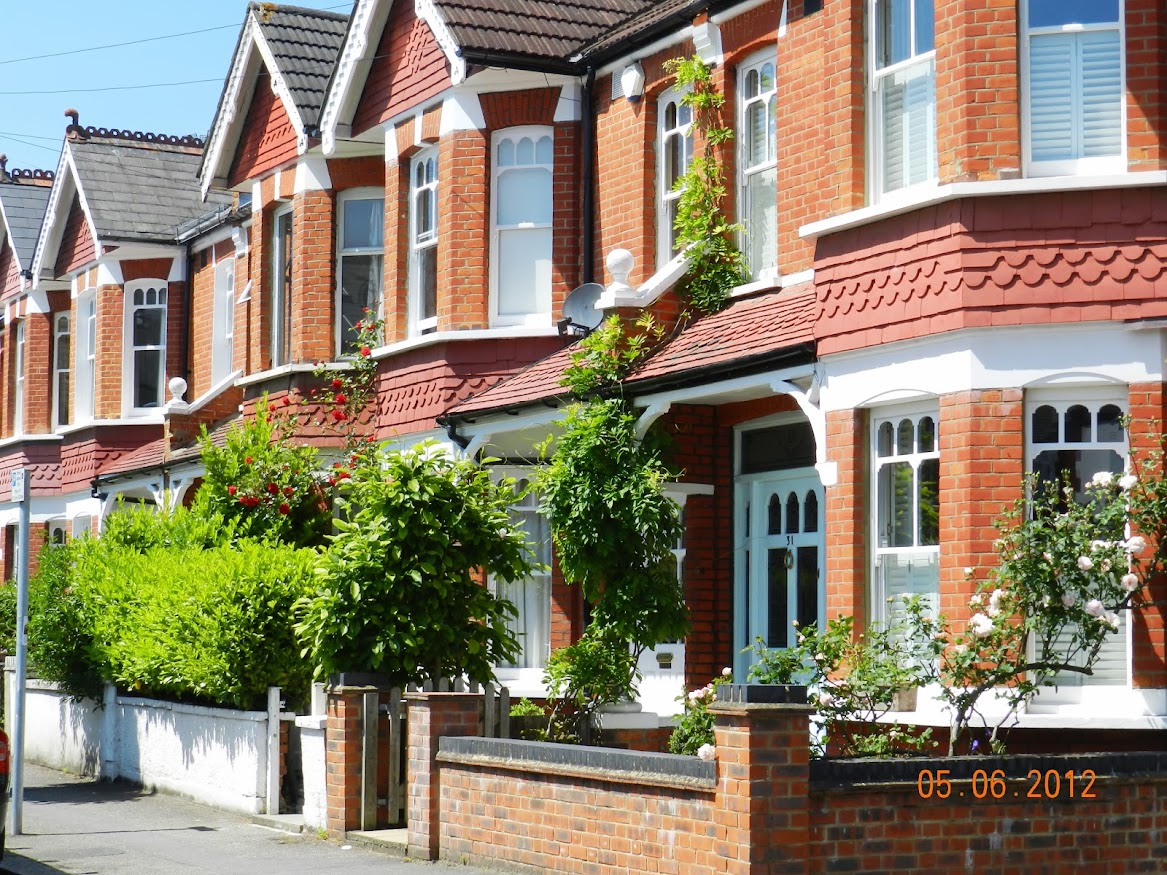 Follow the path past a school and a playground into Wellington Road. Turn left out of the park and then right into a short alleyway past Field Court. This comes out onto Durnsford Road. Turn left to cross at the lights towards Wimbledon Mosque, built in 1977 and then turn right up Arthur Road. Section 5 finishes at Wimbledon Park Station (steep ascent).

In case you have 1-2 spare hours take the tube and head to Clapham Common station. From the station head west on The Pavement toward The Polygon. Turn left onto Clapham Common North Side and the Holy Trinity Church is on your left. Here, in year 1881 started William Wilberforce his successful campaign for the abolition of slavery: 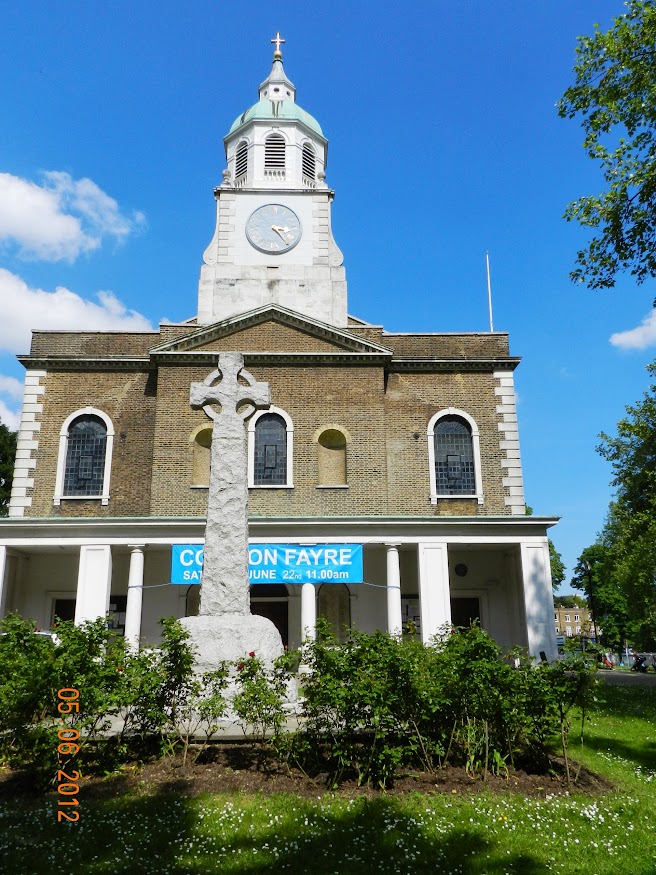 Head northeast on Clapham Common North Side back toward The Pavement. Continue and follow the Old Town, go through 1 roundabout
and you'll see on the left the Mongolian Grill and Hotpot restaurant. A special experience of self-cooked, Mongolian bbq / soup. Yes, you pay money and cook yourself your meal ! (see Tip below). It is in 29 North St. 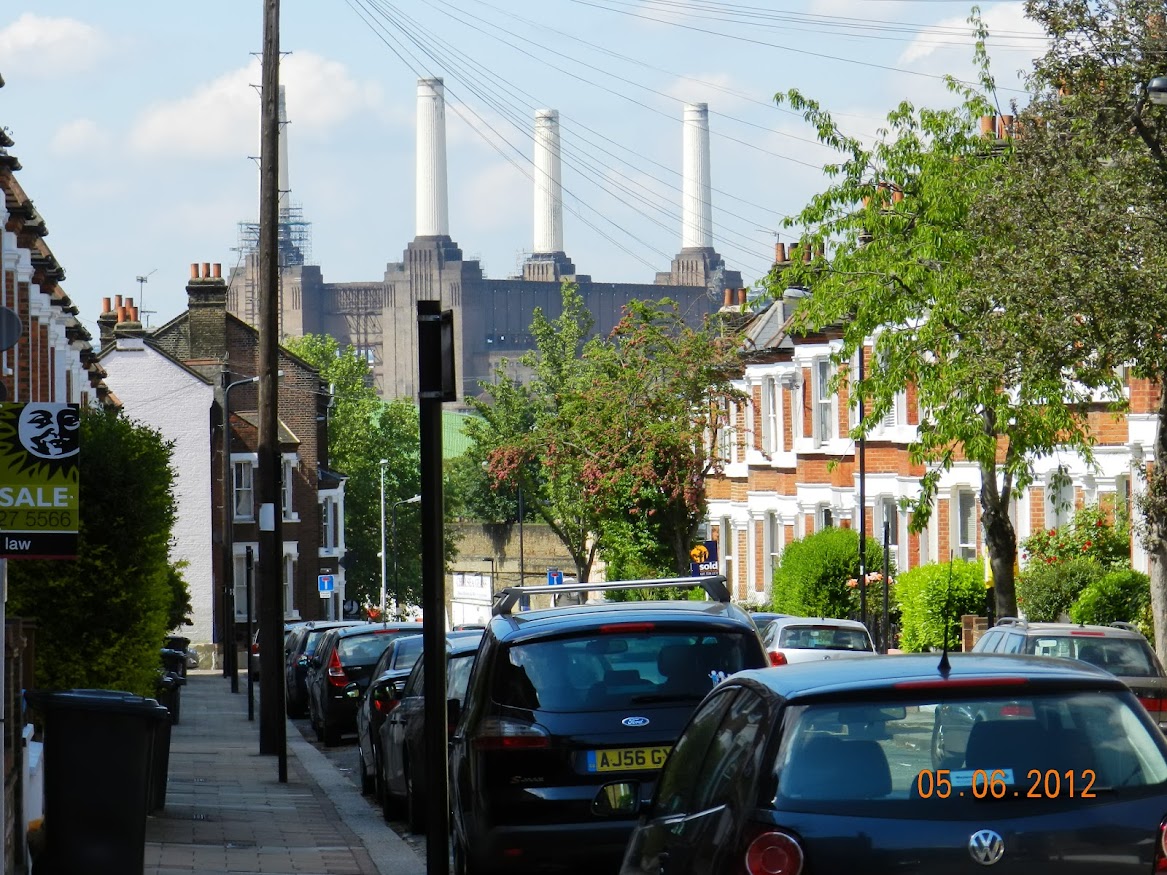 From here you head southward - crossing the whole Clapham Common until you arrive to Clapham Common South station. In a clear day - it is a pleasurable walk of 1/2 hour. Walk back (south-west) on Larkhall Rise, continue onto Rectory Grove. At the roundabout, take the 2nd exit onto and follow Old Town. Continue onto Clapham Common North Side. Slight left onto Rookery Rd and turn right and continue along  Clapham Common South Side. Slight left onto Balham Hill and you face the Common South station. Better, cross the extensive Clapham Common, heading south - and you'll see plenty of green open space, 4-5 ponds (including big one for paddling), lovely old buildings around the park. Here and there you'll see squirrels or ducks. Very relaxing place which provides enough space for everybody: 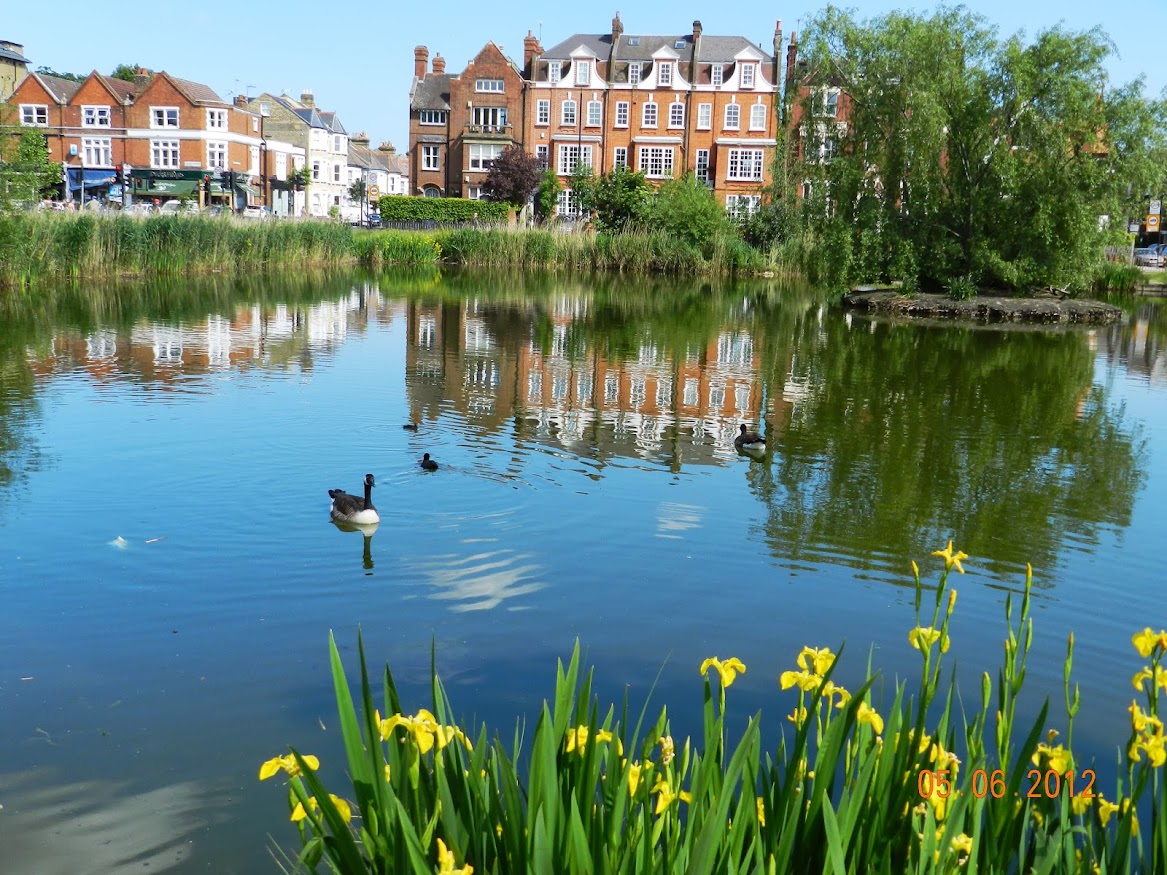 Unusual dining experience. You select the meal (BBQ or Hotpot/soup), slect the ingredients (various types of meat/chicken and vegetables / fruits) and cook array of dishes - mixing, each, with interesting line of dippings and sauces. A genuine concept. 13-14 GBP/person + 12.50% service charge on top of that. You can try various combinations and if you have any questions the owner is right there to guide you. Delicious, oriental atmosphere (red lanterns), cosy, silent place with very attentive service.