From Charing Cross to Hanover Square

Duration: 4-6 hours. Much depends on your shopping habits.

From Charing Cross Tube Station - take the Strand and turn right on the second turn to the right. We start with the Charing Cross Hotel. A great start location as Leicester Square, Regent Street, Covent Garden  - are all walking distance: 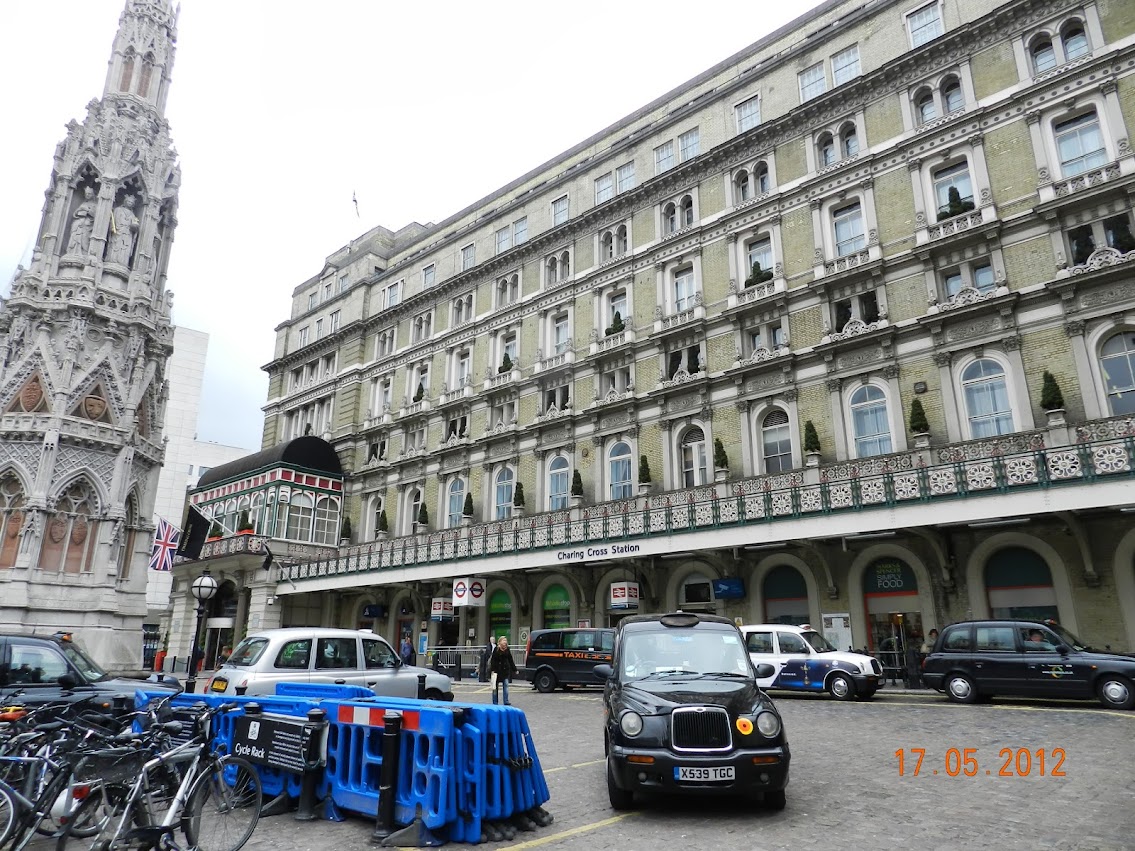 Walk back on Villiers St toward Strand. Turn right onto the Strand and you'll see the Savoy Hotel on your right. Two luxurious hotels. See pictures of the Savoy in my blog on the Embankment and the "Let It Be" show in Savoy Theatre: 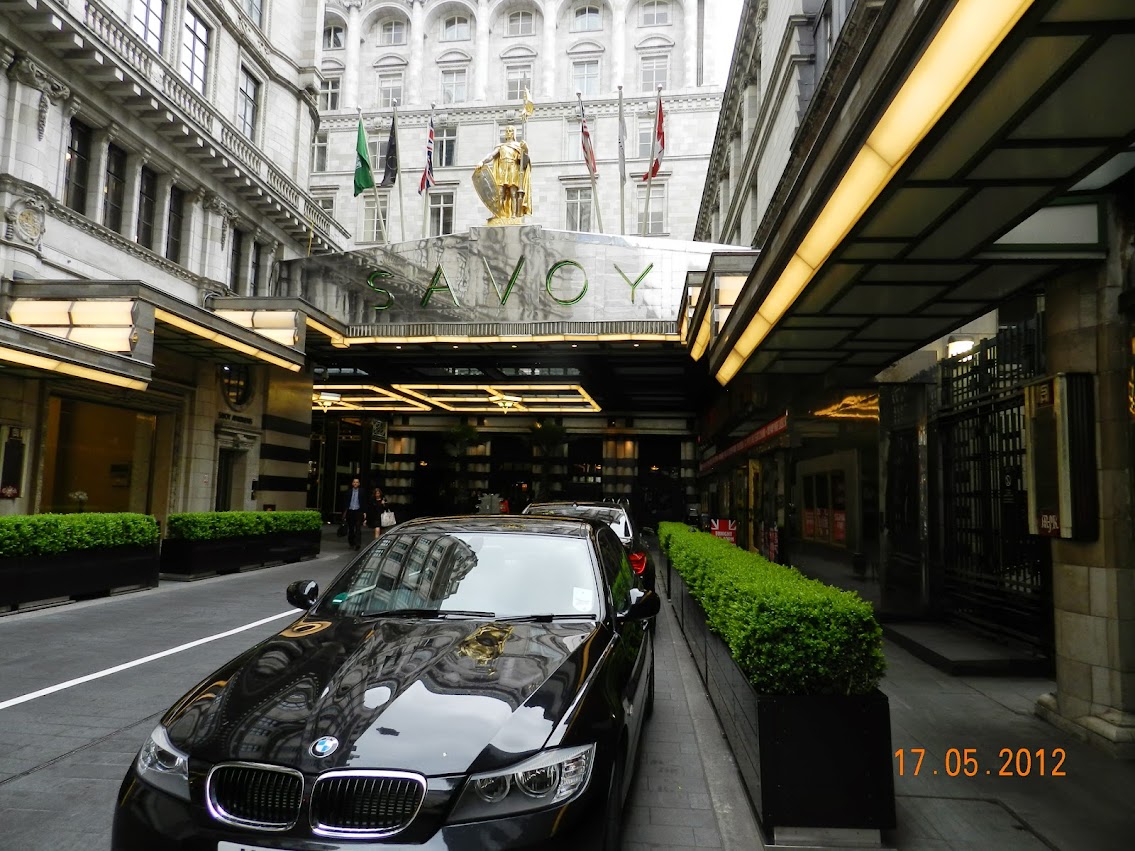 Head southwest on Strand toward Savoy Ct. Turn right onto Bedford St.  Continue onto Garrick St.  Garrick St turns slightly left and becomes Cranbourn St. Continue to follow Cranbourn St and after 150 m. you arrive to Leicester Square. The heart of London with no cars or buses to distract. Keep your valuables close to you around here. Since November 18 2012 a new bronze sculpture has occupied a spot at the end of Cranbourn St in London’s West End – a monument to Agatha Christie. It stands at 2.5 metres high and has the sideways profile of a book, with a cut-out oval section at the centre which features a bust of Christie in profile: 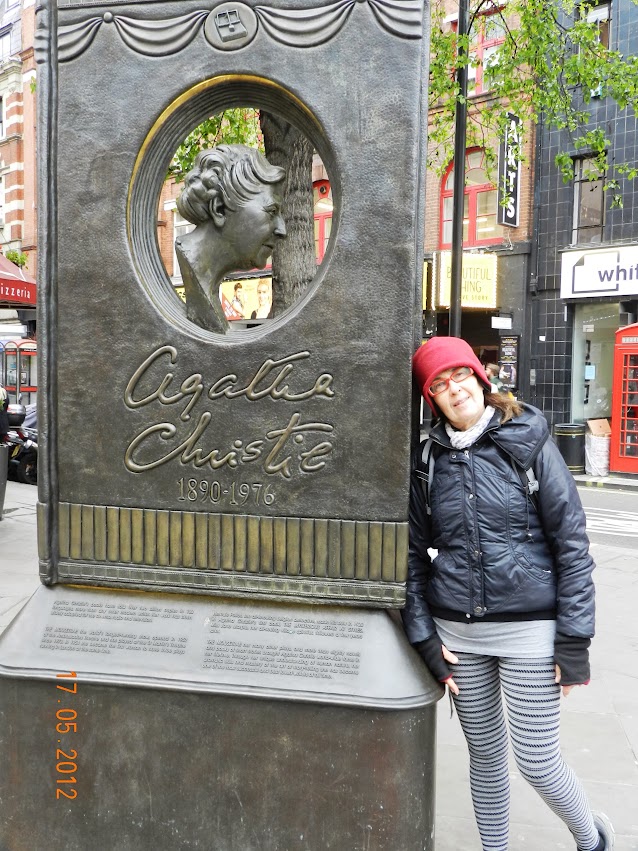 Leicester Square is London's home of entertainment. At night the street performers come out to entertain. One of the signs marking the Square bears the legend "Theatreland". It is claimed that the Square contains the cinema with the largest screen and the cinema with the most seats (over 1,600). The Square is also the home for TKTS, the past Official London Half-Price Theatre Ticket Booth. Tickets for theatre performances taking place around the West End are sold from the booth for about half the usual price. The popularity of the booth has given rise to many other fraudulent booths around the Square that advertise half-price tickets for West End shows. Despite having names like 'Official Half-Price Ticket Booth', they are not official and they do not always advertise the booking fees which commonly come with purchasing tickets.  The best place to get Theatre tickets from is the free standing ticket office which can offer some heavily discounted tickets to the shows.

The square is the most iconic London’s West End spot for shopping (the biggest candy store in the world: M&M store), culture and entertainment like nowhere else. Film premieres are held here:

Relax in luxury at a lobby of one of Leicester Square's hotels which include the: Radisson Blu,  Edwardian Hampshire or the Premier Inn. The Leicester Square lies within an area bound by Lisle Street, to the north; Whitcomb Street, to the west; Charing Cross Road, to the east; Orange Street, to the south. In the middle of the Square is a small park, in the centre of which is a 19th-century statue of William Shakespeare surrounded by dolphins:

The four corner gates of the park had one bust each, depicting Sir Isaac Newton, the scientist; Sir Joshua Reynolds, the first President of the Royal Academy; John Hunter, a pioneer of surgery; and William Hogarth, the painter. Do not look for the  statue of film star and director Charlie Chaplin.  It Has been removed before the 2012 Olympics. The Leicester Square Park at the centre of the Square is bound by Cranbourn Street, to the north; a section of road designated simply as Leicester Square, to the west; Leicester Street, to the east; Irving Street, to the south. Since the Olympics there are now less flower beds and more grass for the public to use: 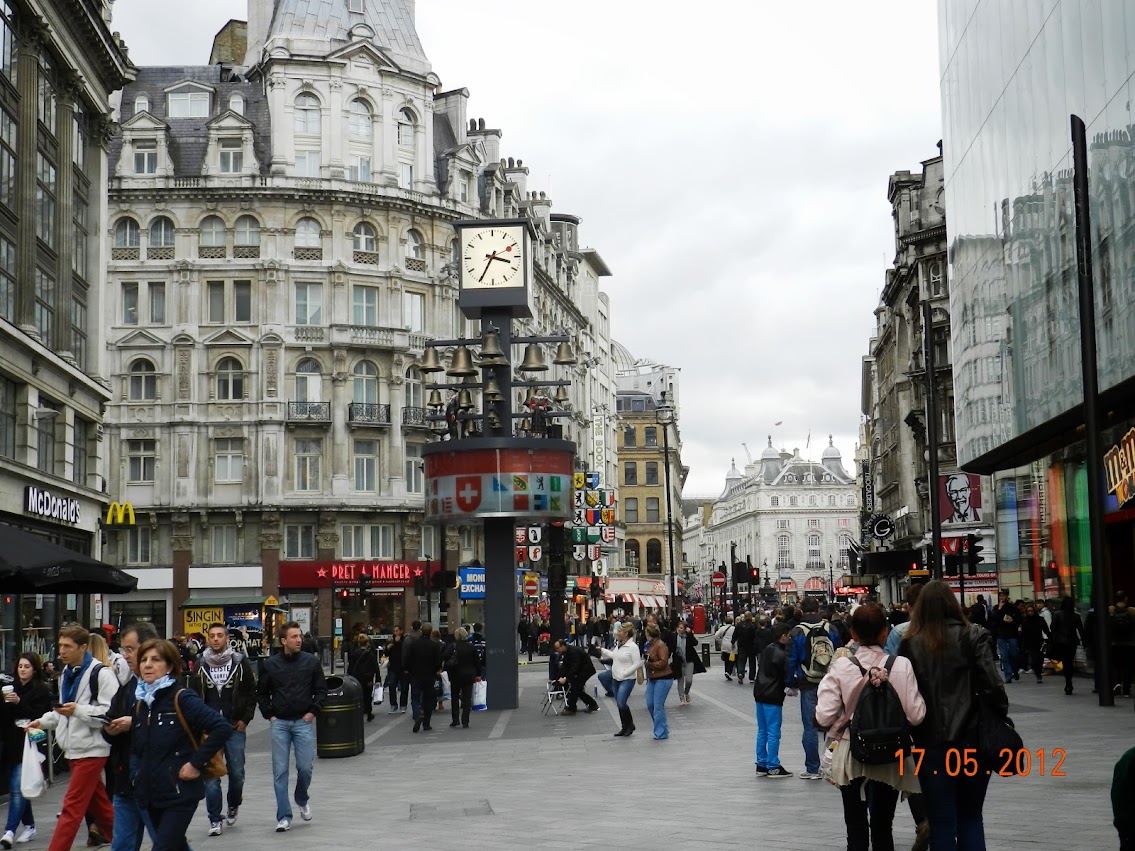 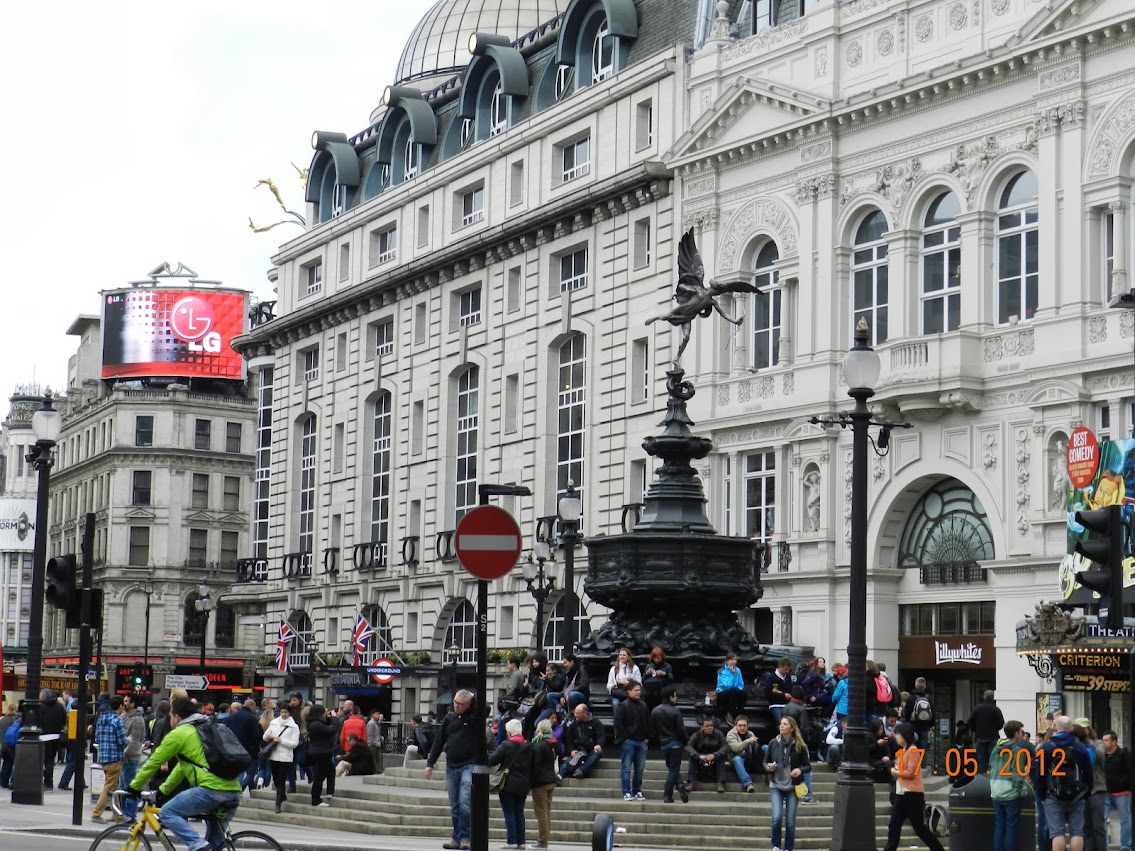 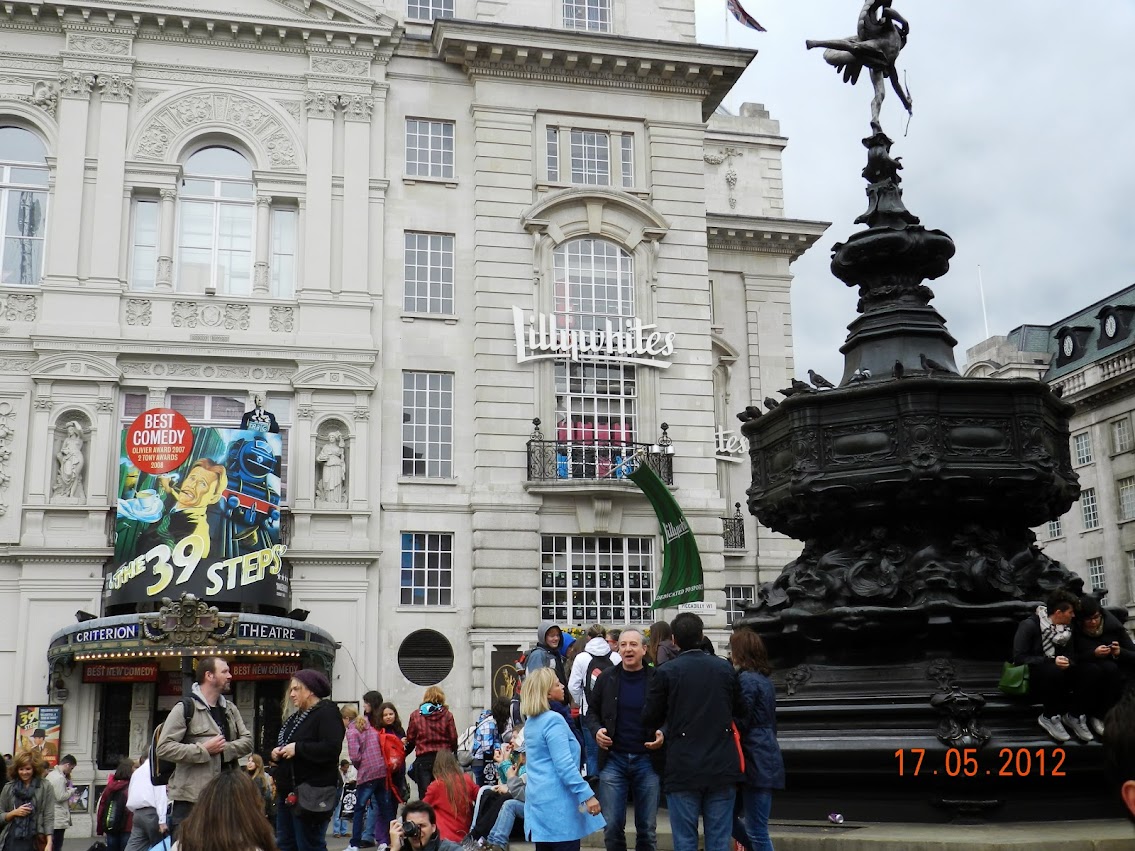 This busy square is one of the major landmarks of London, full of neon lights and a lot of opportunities for people watching. It is famous for the fountain that was installed here at the end of the nineteenth century and for the neon advertising that turned the square into a miniature version of Times Square (Its far less electrically lit up as compared to its NY cousin). At the center of the Circus stands the Shaftesbury Memorial Fountain. It was built in 1893 to commemorate Lord Shaftesbury, a philanthropist known for his support of the poor. The semi-nude statue on top of the fountain depicts the Angel of Christian Charity but was later renamed Eros after the Greek god of love and beauty. The fountain was made in bronze, but the statue is made of aluminum, at the time a novel and rare material. The Circus lies at the intersection of five main roads: Regent Street, Shaftesbury Avenue, Piccadilly Street, Covent Street and Haymarket.

On the south-east direction is Regent Street. It is covered under a seperate blog. you must walk through this street ! The beautiful architecture and eye-catching window displays make every stroll down the historic street one to remember. A legendary street that offers it all; brand shopping, nice boutiques, wonderful architecture, amazing little restaurants and bars at the side streets. Many of the shops are too expensive, and yet, this is the perfect shopping experience. Stunning shops, few designer shops, the biggest toy shop in London (Hamleys). Lights and city traffic illuminate the street at night making it a picturesque London destination: 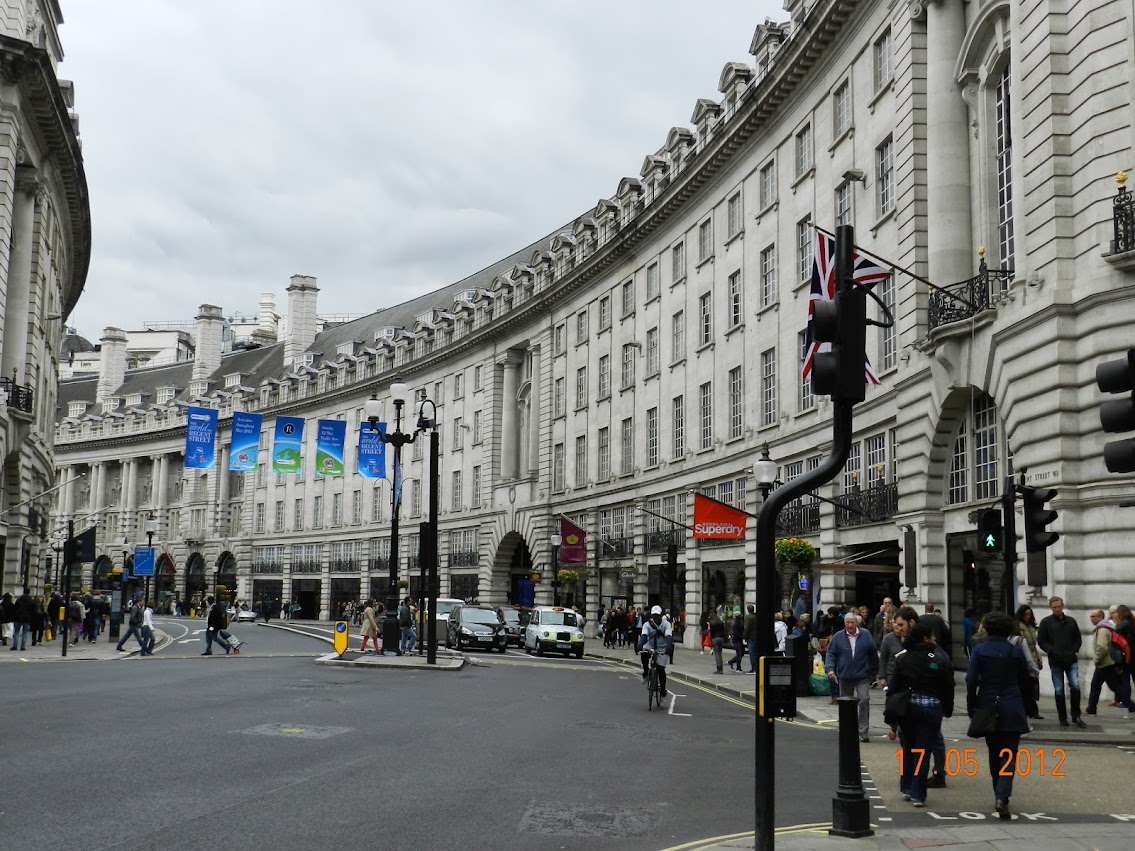 Walk in Regent Street until you come to the T junction: the Glasshouse St on your right and Vigo St on your left. Turn left onto Vigo Street and there, on the 2nd turn to the left - turn onto Old Bond Street (another way is to walk from Picadilly Cirus along the Picadilly road and turn right to the Old Bond Street. But, I prefer the picturesque Regent Sterret !). I recommend to turn left from Vigo Street to (southward) the Old Bond Street and, later, return all the Old Bond back  (northward) - continuing onto the New Bond Street. Old Bond Street was built in the 1680s by Sir Thomas Bond and New Bond Street, the stretch further north, was built 40 years later. Bond Street never fails to impress, from the exclusive boutiques to the famous department stores. Bond Street competes with Knightsbridge as the ultimate luxury shopping experience in London. Things, here around, are a bit too pricey. Practically - better for for window shopping... Most shops do not have prices in the windows. Creme-de-la Creme-type brands. You can continue in the Royal Arcade and Burlington Arcade (closer to Regent Street) and other, less famous, nearby arcades.

Tip: visiting during the sales you can find a good deal.

Bronze statue of Franklin D. Roosevelt and Winston Churchill sitting 'talking' together on a bench in Mayfair (exactly, where Old Bond Street meets New Bond Street). This statue by Lawrence Holofcener was unveiled in year 1995: 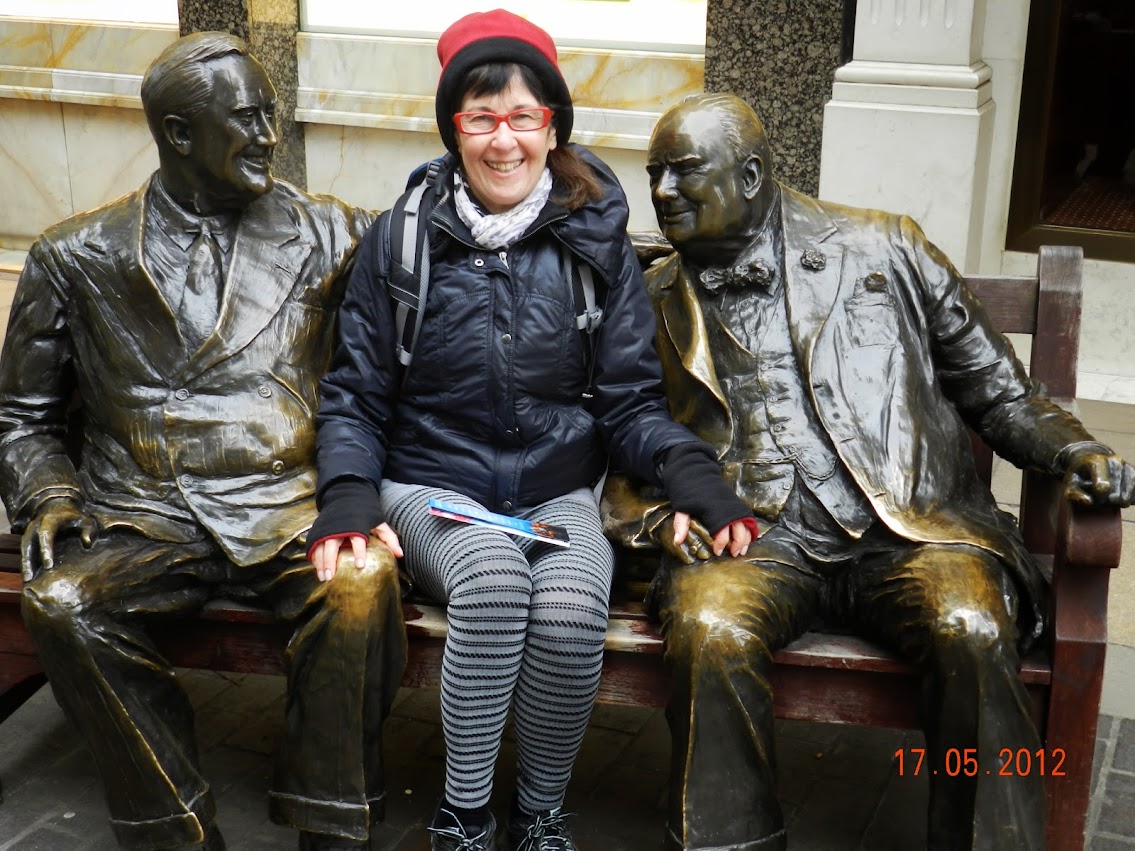 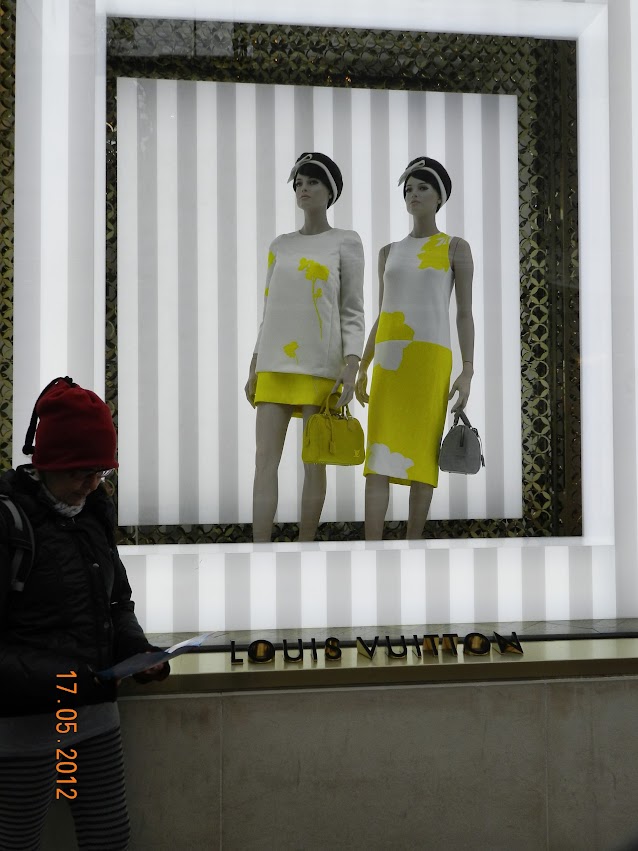 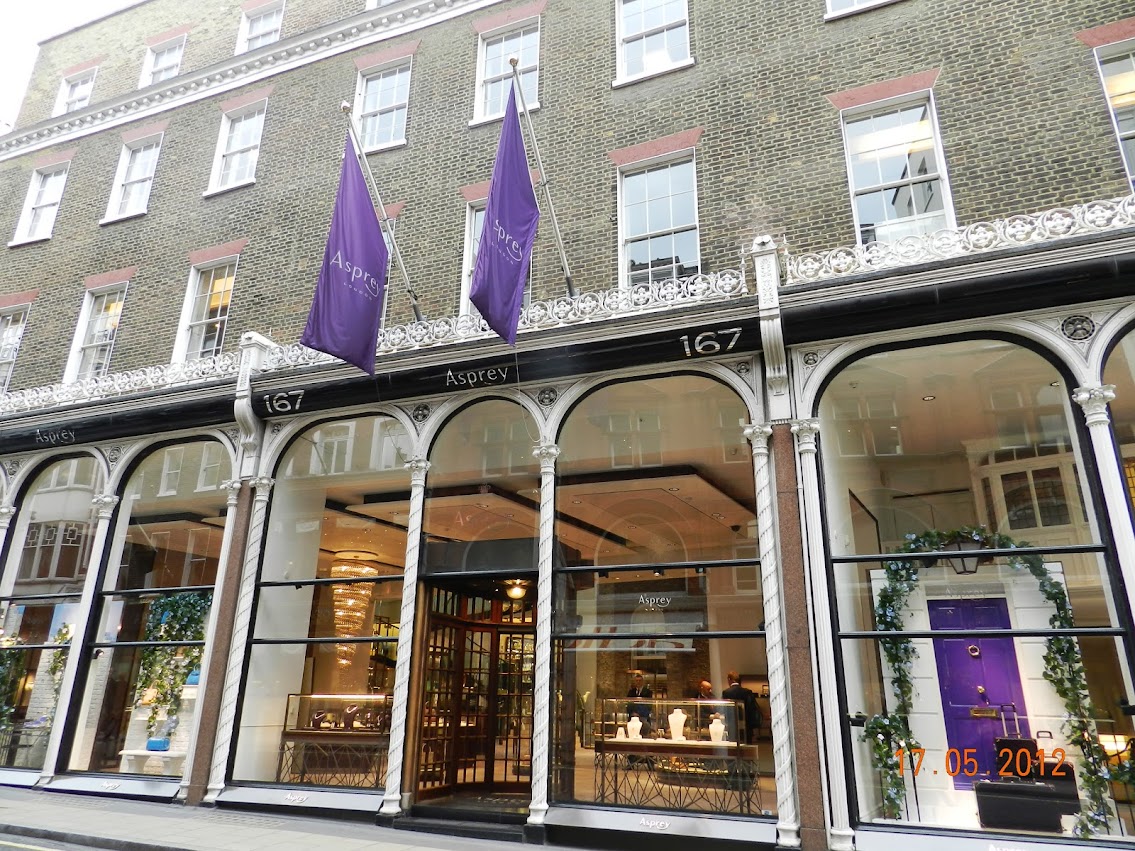 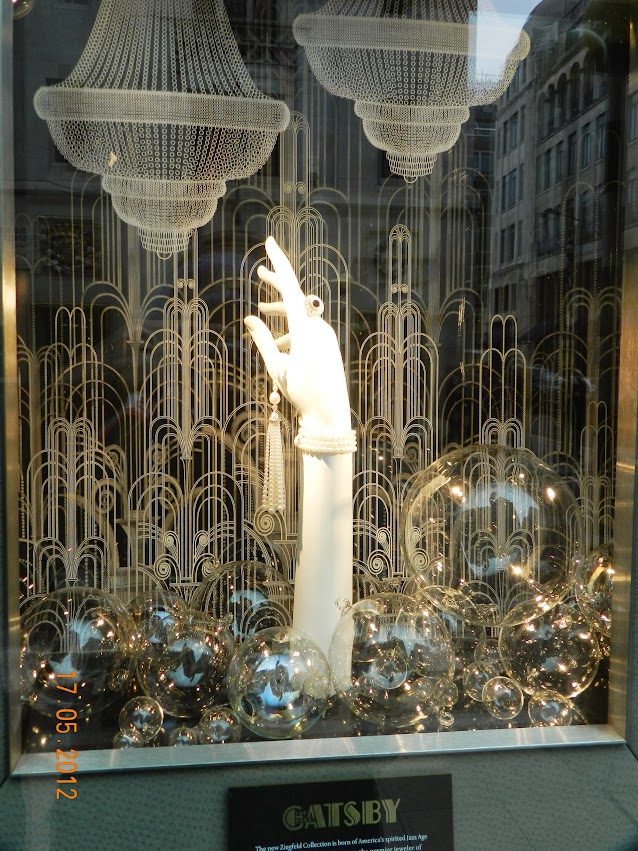 The Royal Arcade - 28 Old Bond Street: Originally called simply ‘The Arcade’. The ‘Royal’ was added after Queen Victoria shopped in 1882 with shirtmaker Hodgson William Brettell. HW opened his shop at No12 in 1880, a year after the arcade was built to connect Brown's Hotel to Bond Street. 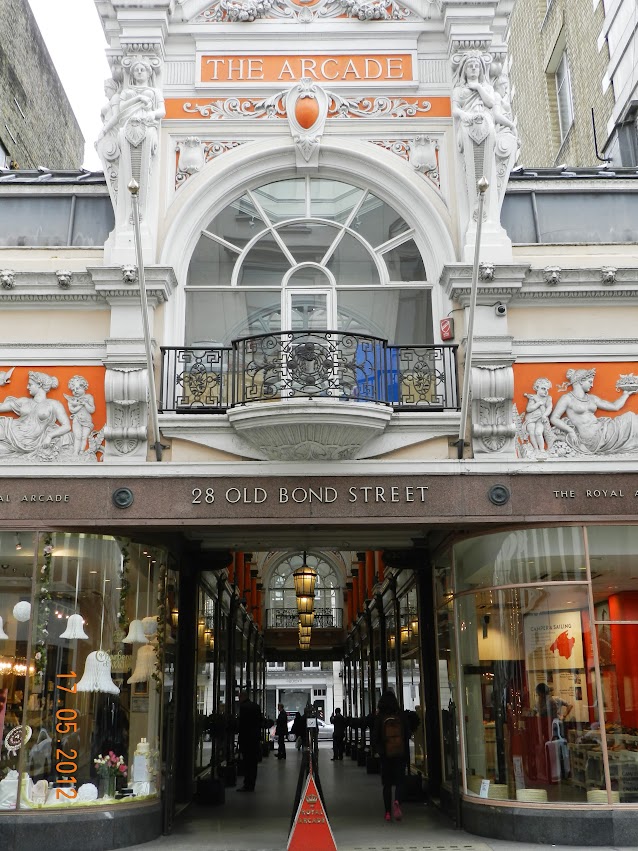 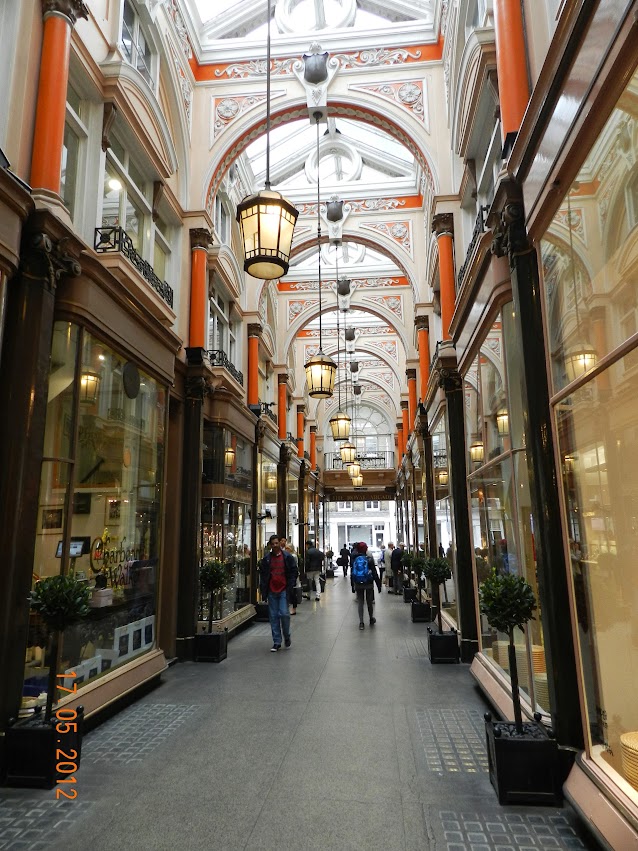 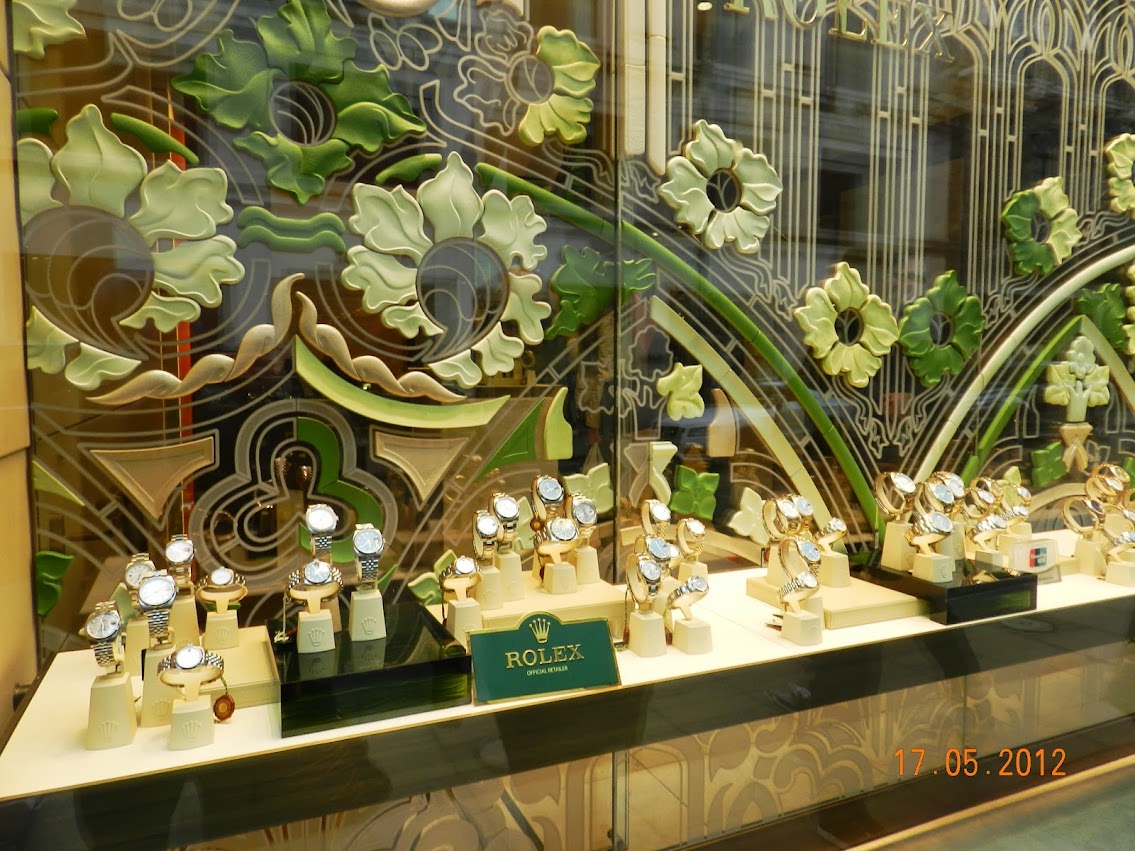 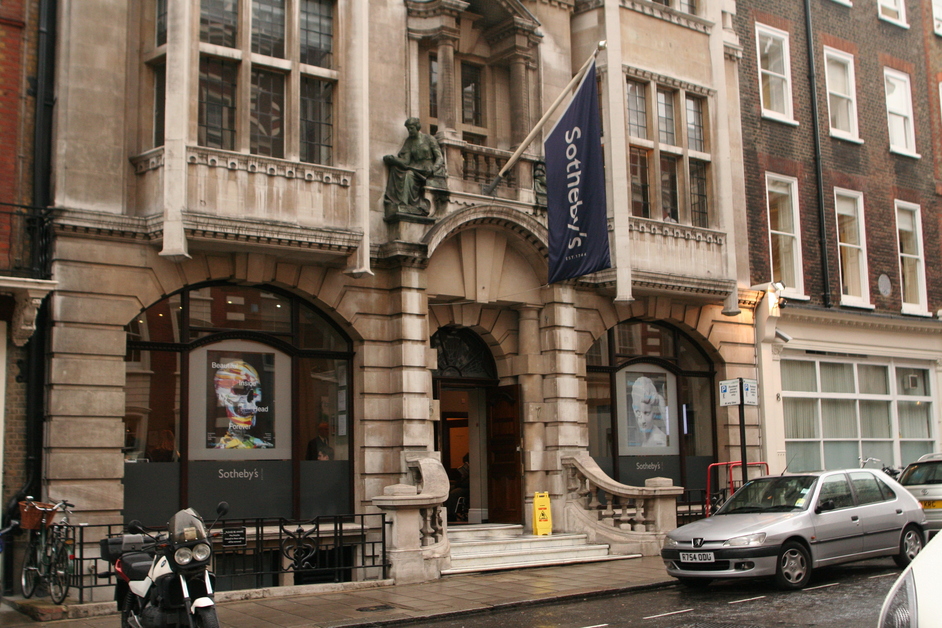 Hidden above Sotheby’s entrance is the oldest outdoor statue in London: the Ancient Egyptian black basalt body of the lion-goddess Sekhmet. Dates to around 1320 BC:

On number 153 (New Bond Street) (Time-Life Building) , you find various abstract figures of Henry Moore - some human, some not, arranged in a stone screen:

Do not walk until the end of New Bond Street (except of looking at Sotheby...). Turn left to the Bruton street. In the junction of these two streets watch an isolated, interesting wood house with a nice pub: 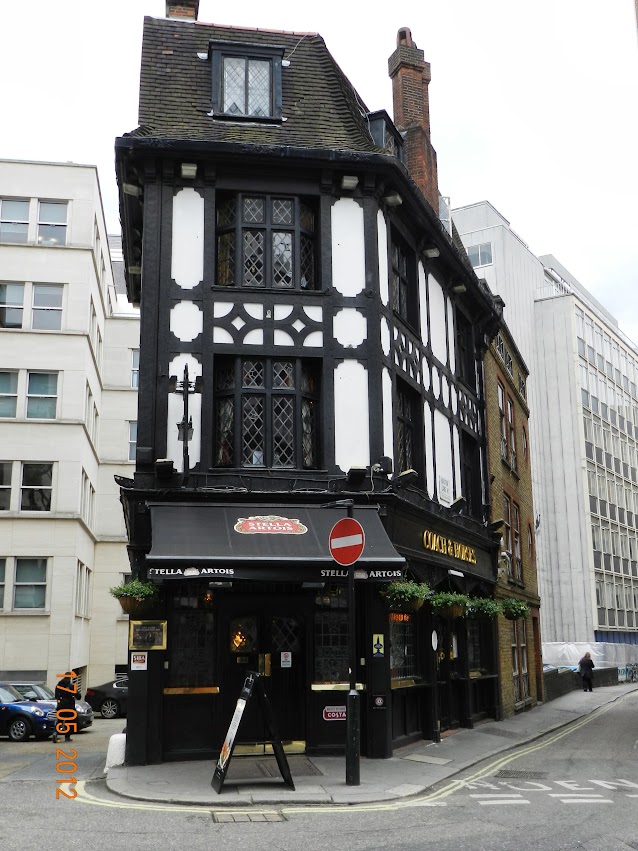 Take the Bruton street until you face the Berkeley Square. It was originally laid out in the mid 18th century by architect William Kent. The buildings around the square include several by notable architects including Robert Adam. The square features a sculptural fountain by Alexander Munro, made in 1865. A residence in Berkeley Square is highly sought after. The square, resides, actually, in Mayfair: 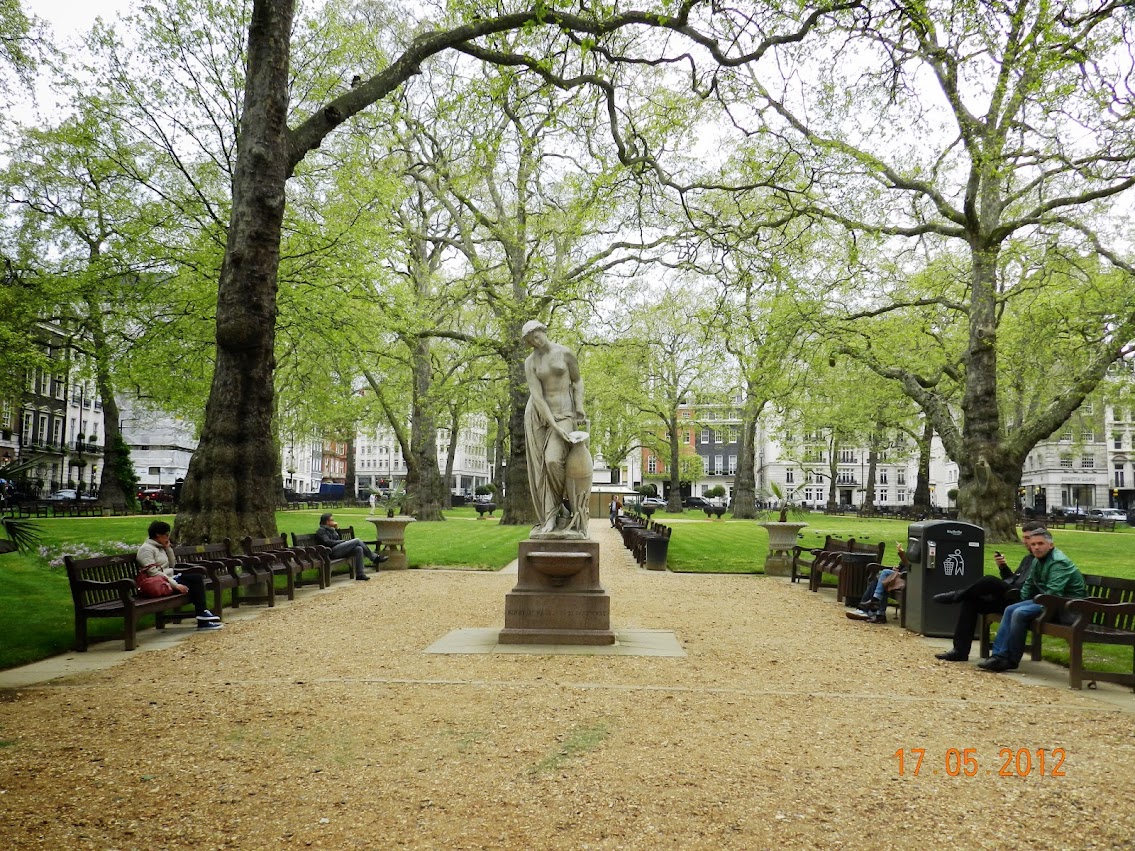 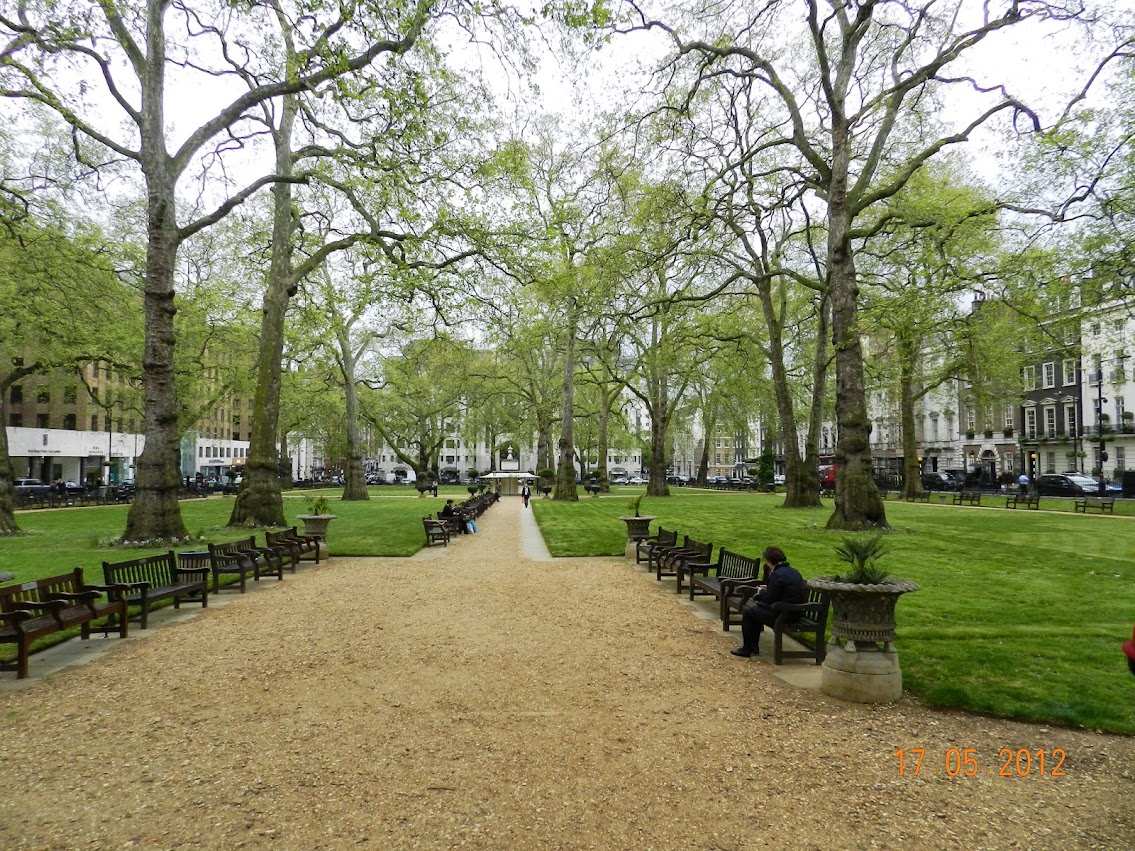 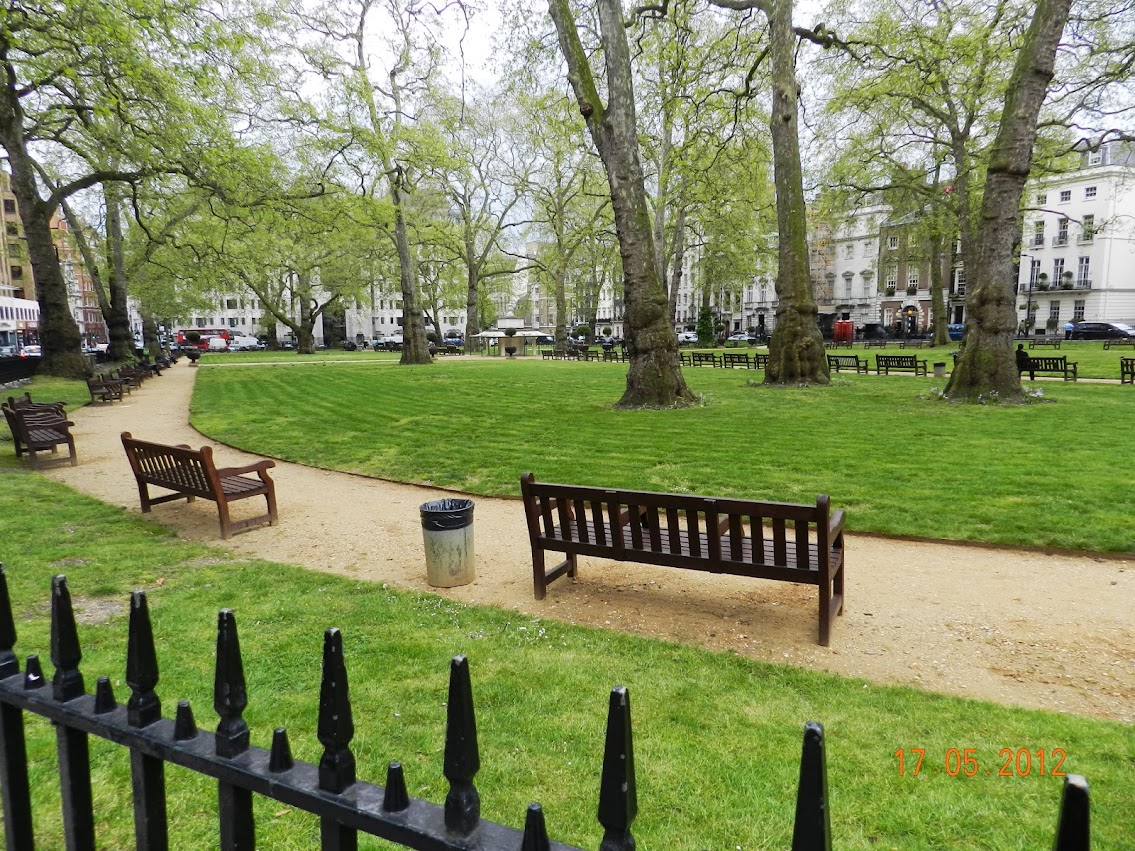 The Berkeley Square is surrounded by posh car showrooms and property HQs. Rools-Royce: 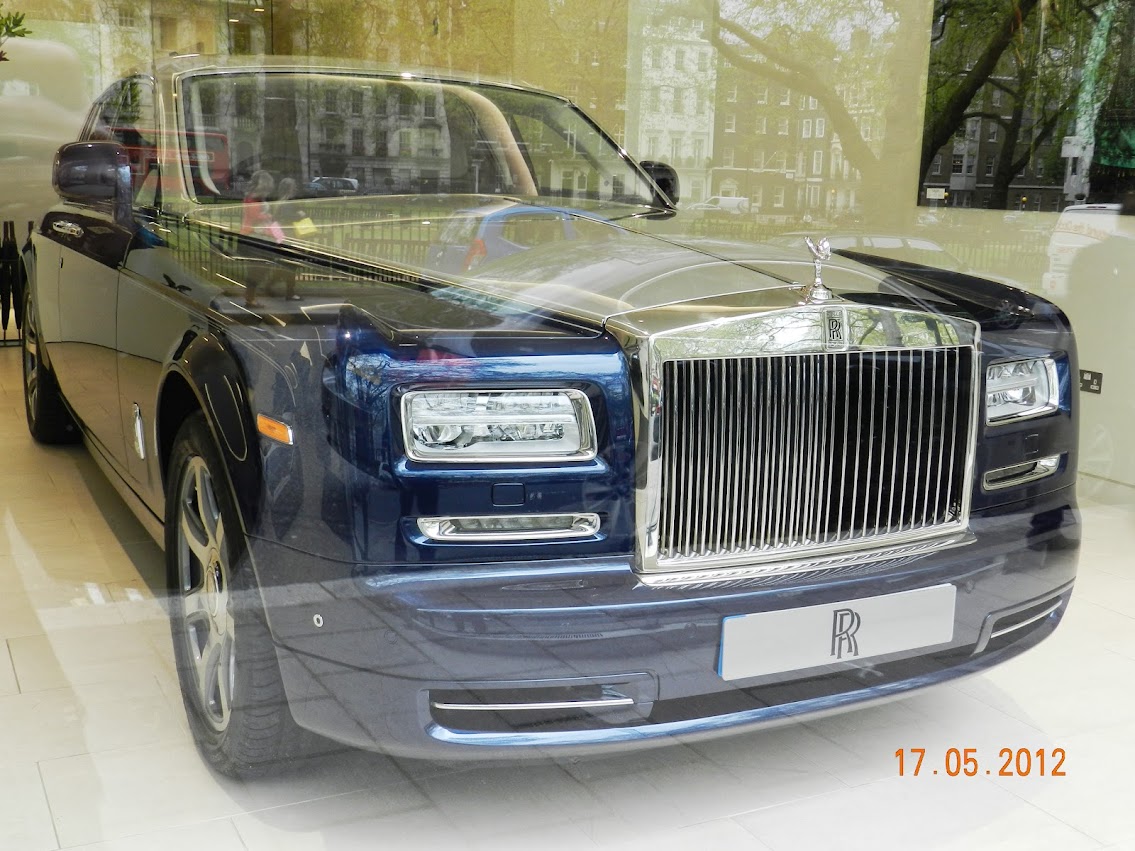 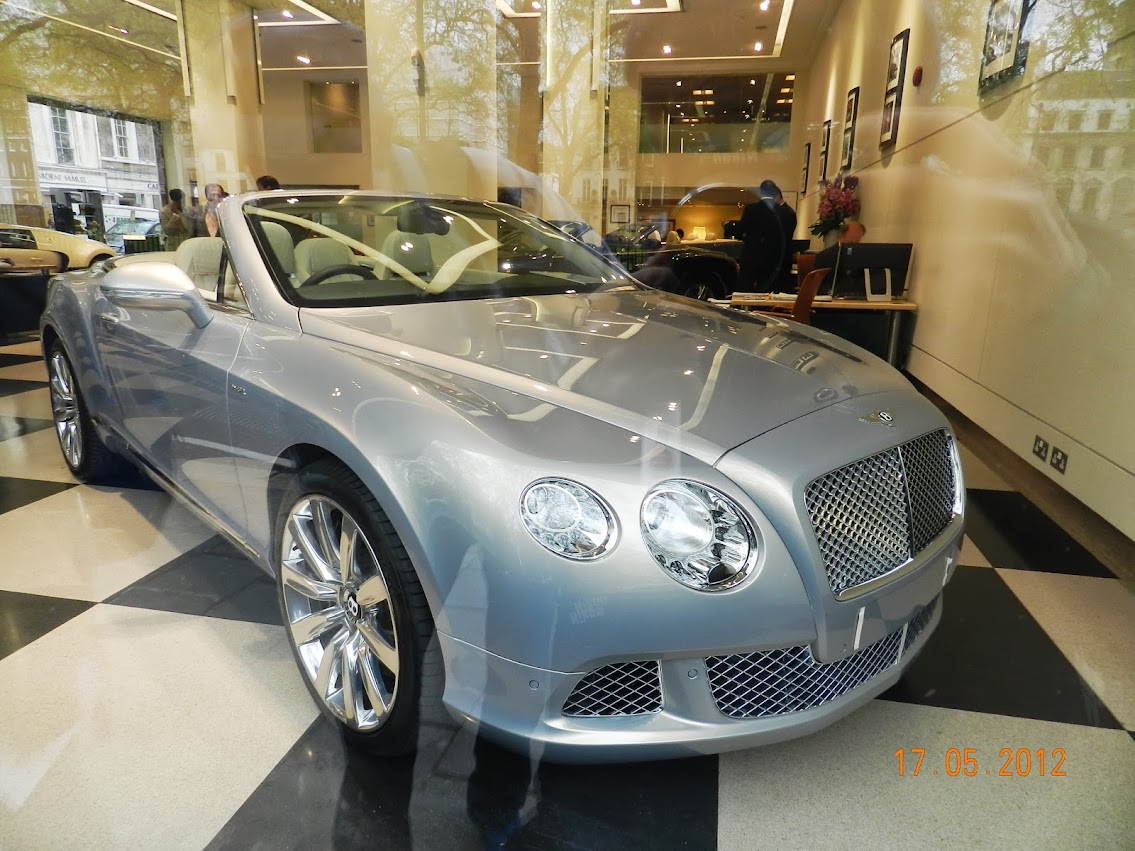 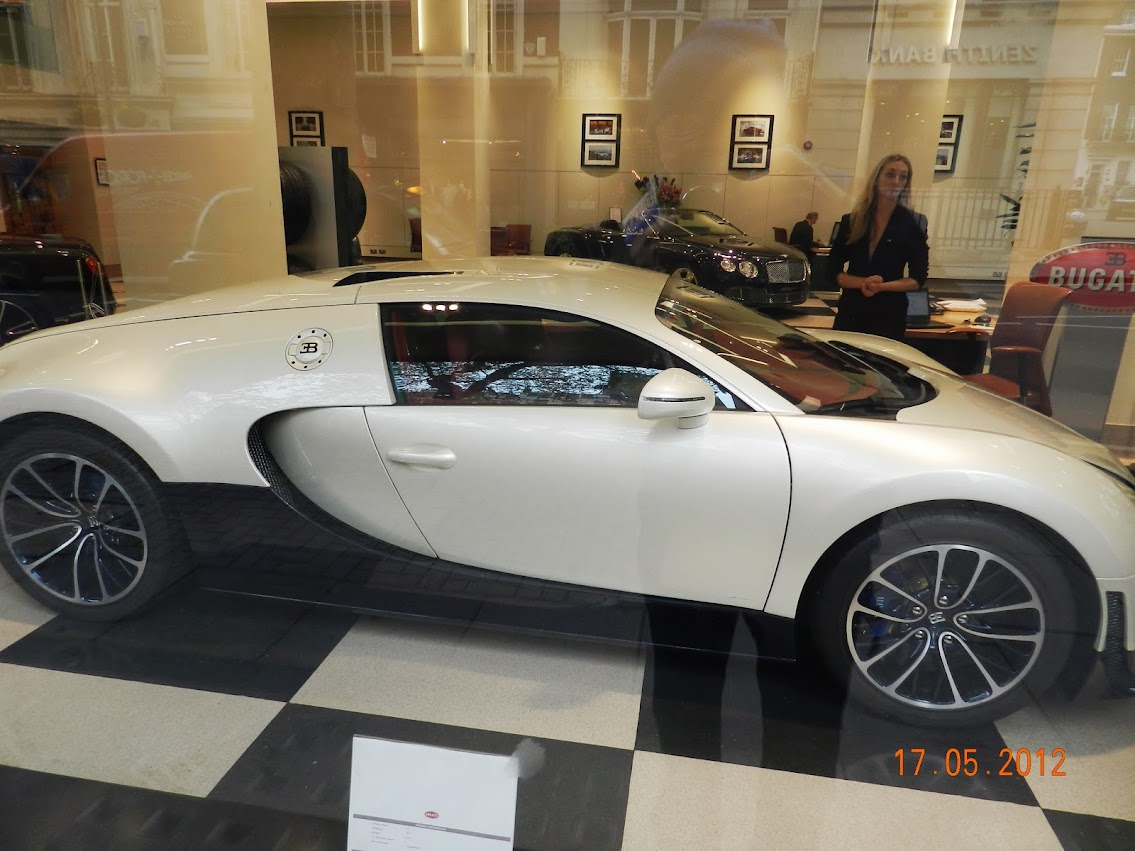 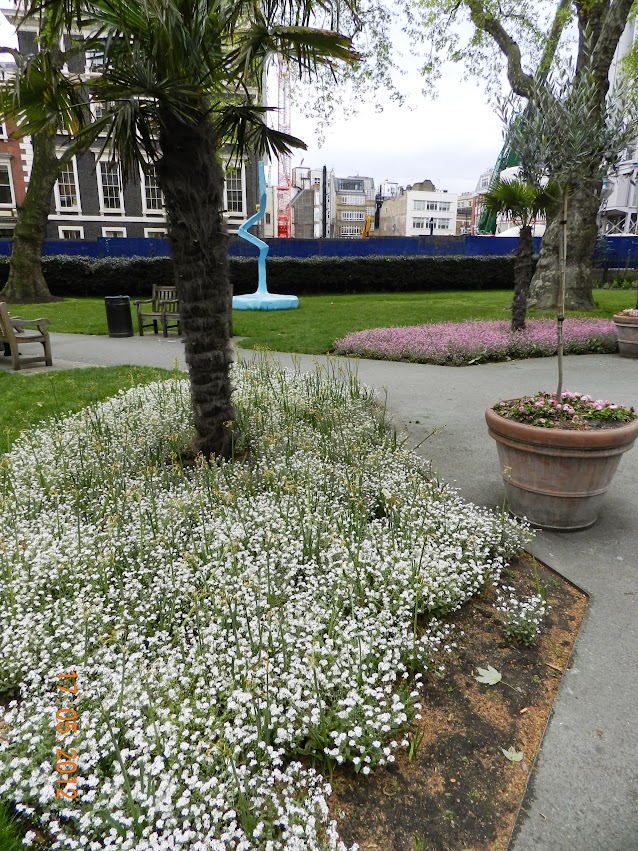