Budapest - Memento Park - The biggest statues of the Cold War

Memento Park, Budapest 22nd district (Southern Buda) corner of Balatoni ut and Szabadkai utca. This is is a sculpture park dedicated to the large and impressive sculptures erected in the time when Hungary was a Communist country. It is a historical theme park with it’s different sights and sections: the Statue Park, photo exhibition and film showing. Situated on the edge of the city, it does require some effort and time to get to the park.

Weather: It can get very cold if visiting in the autumn-winter months so wrap up well. You can find shelter in the park's museum BUT NOT in the park itself.

Public transport: Public Bus Transport to Memento Park from “Kelenfold vasutallomas – Metro 4″ (see below - access to this Metro station) – with BUS No. 101 (see below) and 150 to Budateteny vasutallomas (Campona). Start time: MON - FRI  every 10 minutes, SAT - SUN every 30 minutes. The ride to Memento Park is  approx. 10-15 min. Day passes, BKK-tickets (prepaid: 350 HUF, on the bus: 450 HUF) and Budapest Cards are valid. The ride takes 40 minutes. You get the chance to see some of the places on the way where real Hungarians live, not just the tourist joints.

The M4 is a brand new metro Line in Budapest opened in April 2014.
It may seem a little chaotic until 2015 when the reconstruction works will be completed. The “Kelenfold vasutallomas" is the departure place of number 150 bus that takes you to Memento Park. The number 101 bus also departes from here to Memento Park but its service is only
available in the weekdays and after 13.00. Please Take a bus seat in the buses -  preferably on the right hand side.

Note: No context around every statue or exhibit. There's nothing else in the area - no restaurants, no bars, no public areas. Along ride to the park. It is a good idea to take the Deak Ferenc Ter direct bus which leaves at 11.00 every day - if you have 1/2/3-day public transport pass.

Memento Park is an open air museum dedicated to 42 monumental statues from the Communist period (1949–1989) that were removed from Budapest after the fall of Communism . There are statues of Lenin, Marx, and Engels, as well as several Hungarian Communist leaders. The park was designed by Hungarian architect Ákos Eleőd, who won the competition announced by the Budapest General Assembly (Fővárosi Közgyűlés) in 1991. The project's architect said on this park theme:  "This park is about dictatorship. but at the same time, this park is about democracy. After all, only democracy is able to give the opportunity to let us think freely about dictatorship". On June 29, the park celebrated a grand opening as a public outdoor museum. Above all - the park demonstrates the folly of an extreme ideology.

The second part of this park  Witness Square which holds a replica of Stalin's Boots which became a symbol of the Hungarian Revolution of 1956 after the statue of Stalin was pulled down from its pedestal in 1956.  Year 2006 marked a new chapter in the history of Memento Park. A life-sized copy of the tribune of the Stalin Monument in Budapest was built in the Statue Park with the broken bronze shoes on top of the pedestal. This is not an accurate copy of the original but only an artistic recreation by Ákos Eleőd. In 2007 a new exhibition hall and a small movie theater were opened in the Witness Square of Memento Park. The photo exhibition called “Stalin’s Boots” in the exhibition hall takes the viewer through the history of the 1956 revolution, of the political changes of 1989-1990 and of Memento Park, with both English and Hungarian captions. In the barracks-theater one can see The Life of an Agent, a documentary on the methods used by the secret police, directed by Gábor Zsigmond Papp. The film is shown in Hungarian with English subtitles. 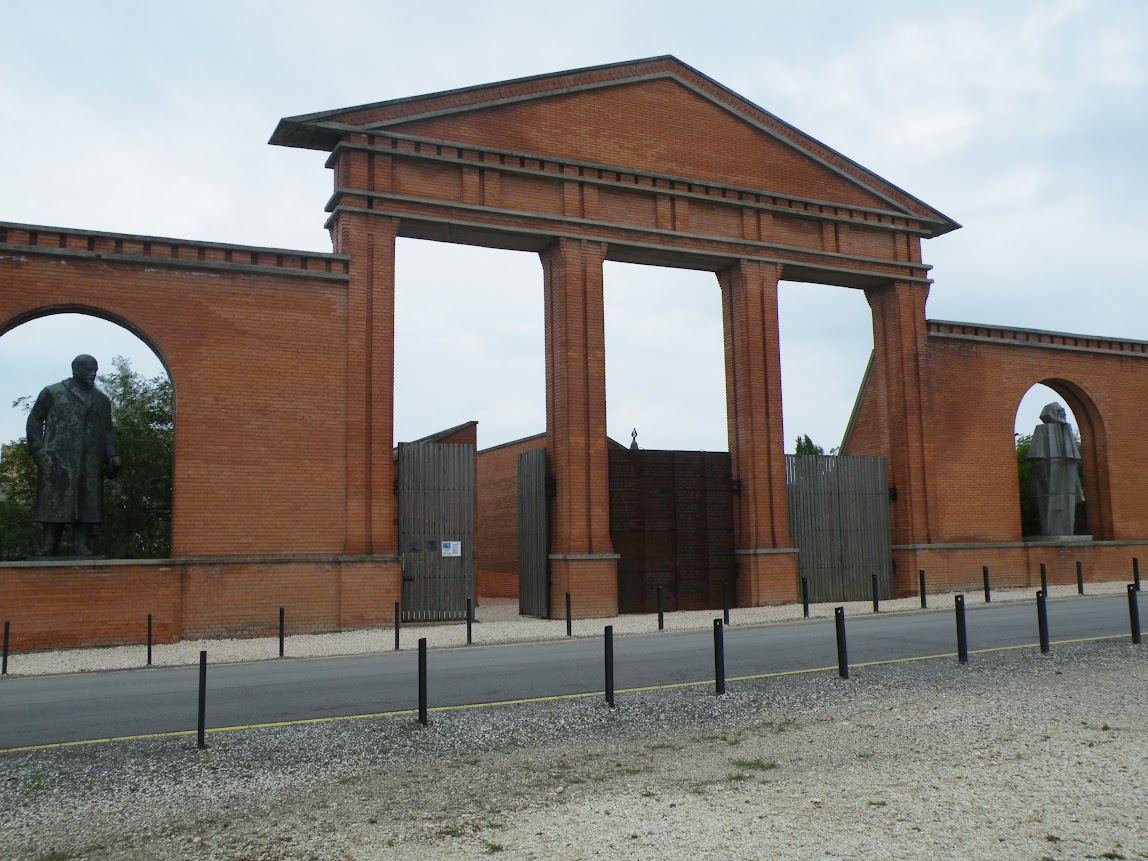 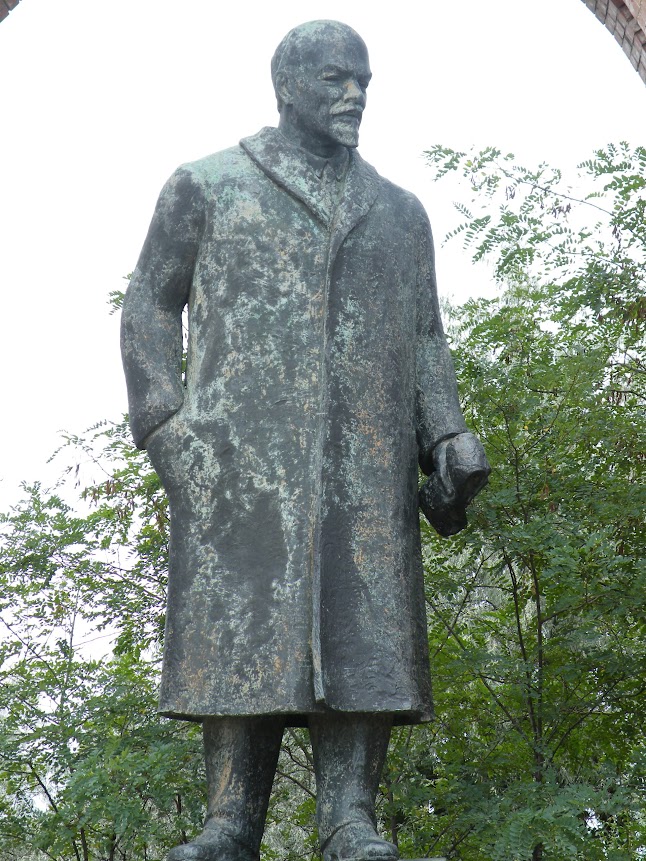 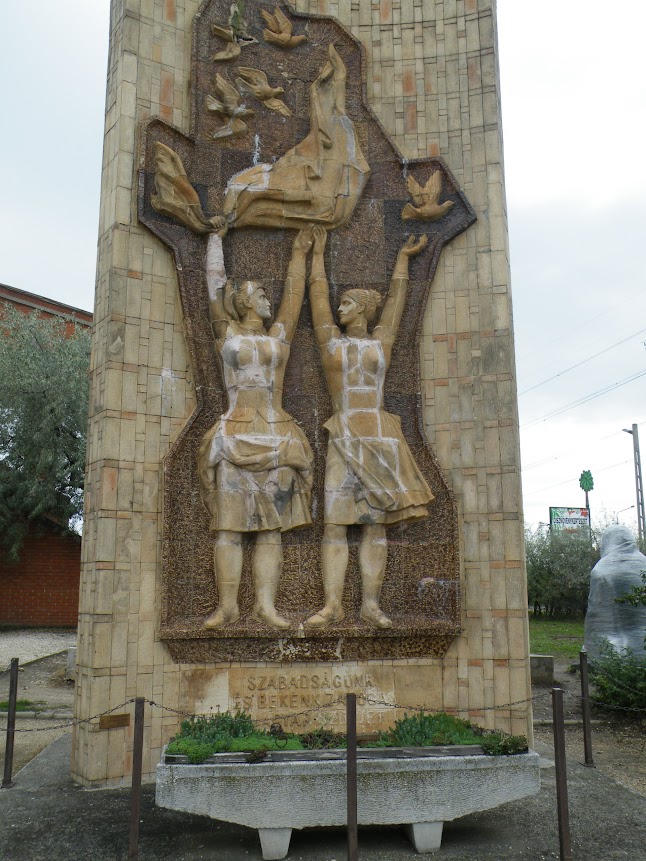 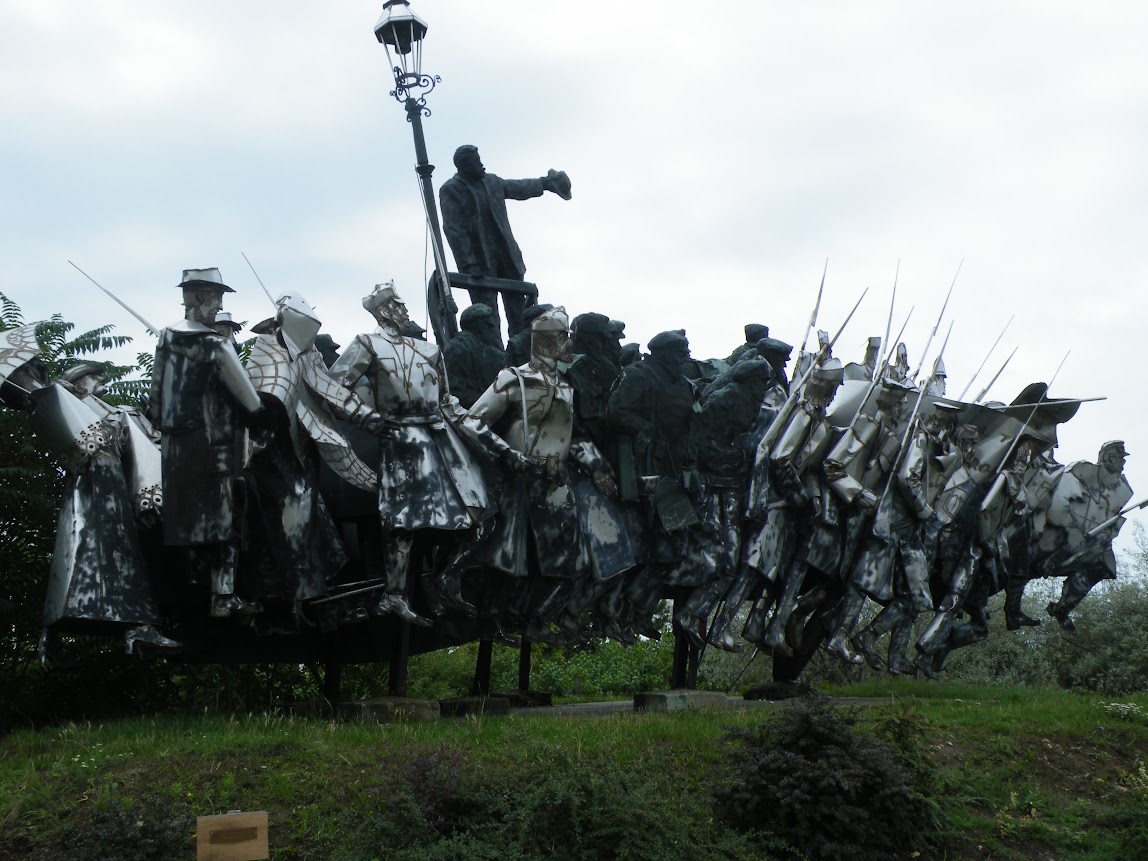 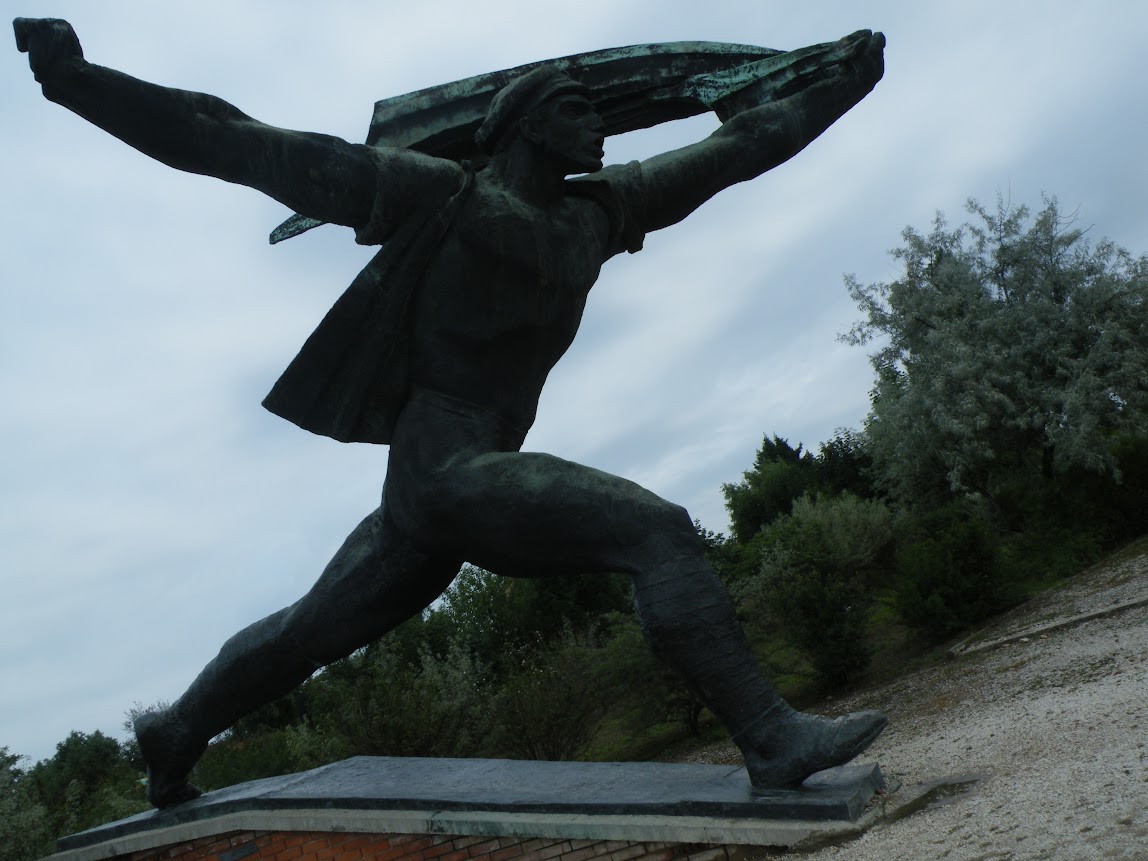 Monument to the Martyrs of the Counter-Revolution: 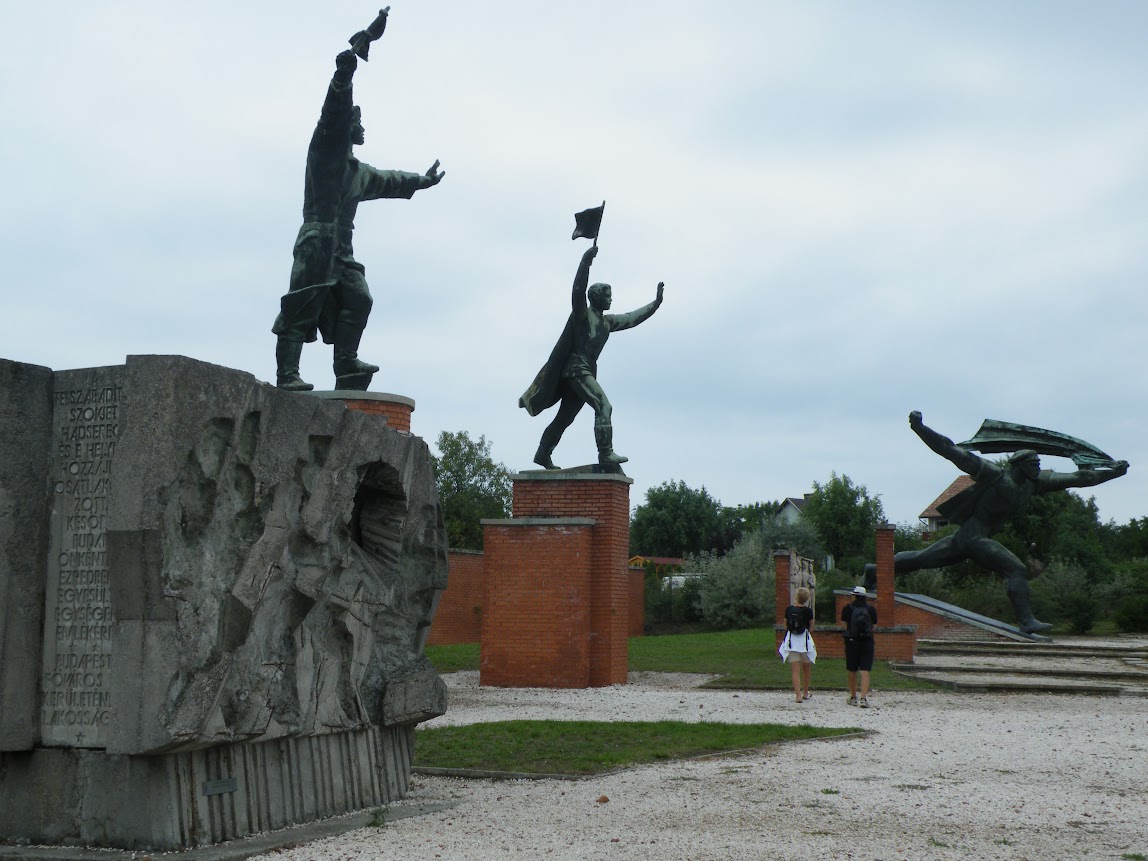 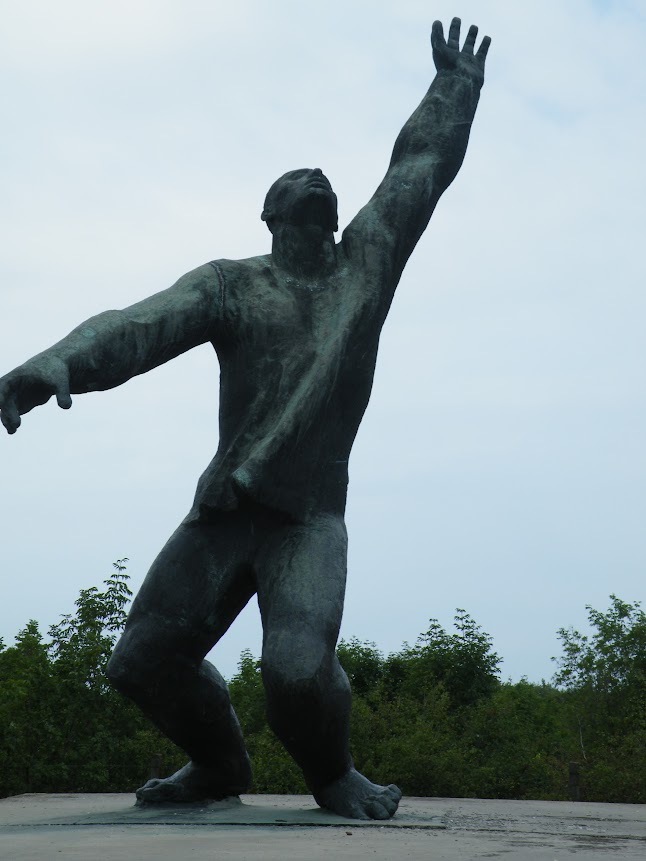 The Hungarian Fighters in the Spanish International Brigades Memorial: 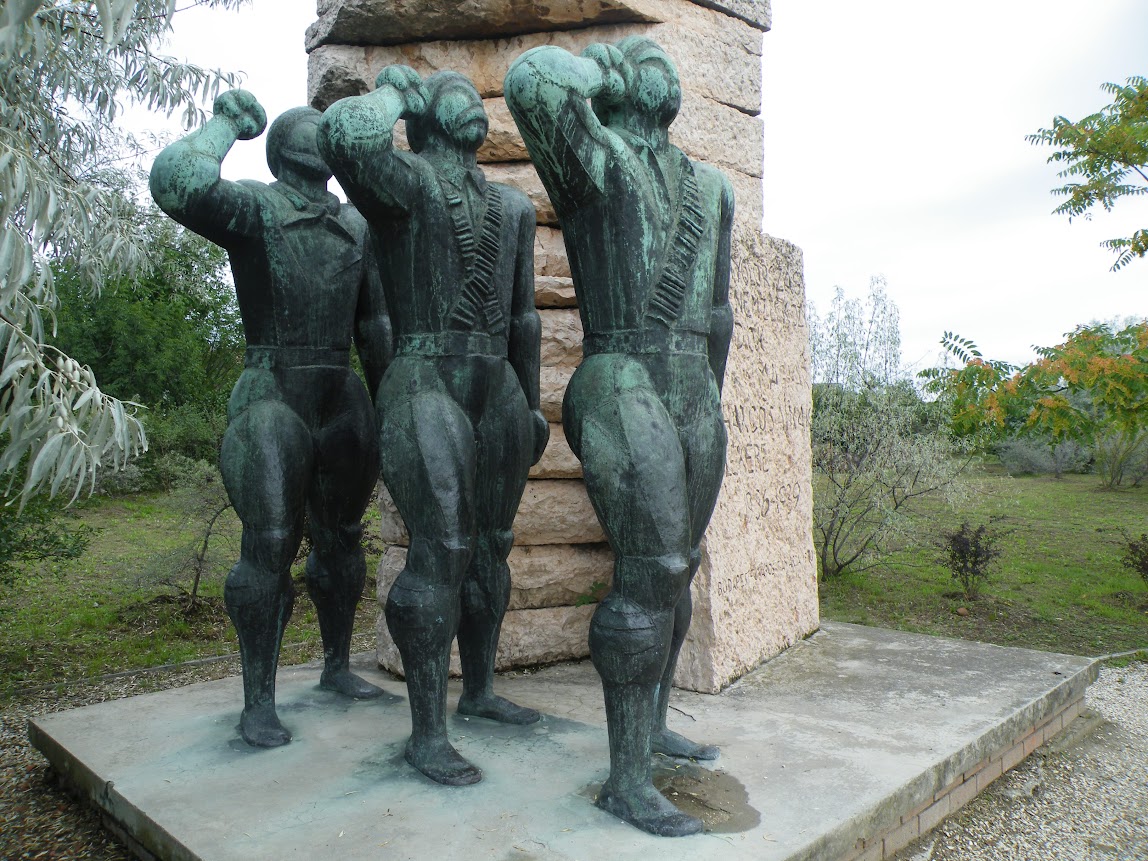 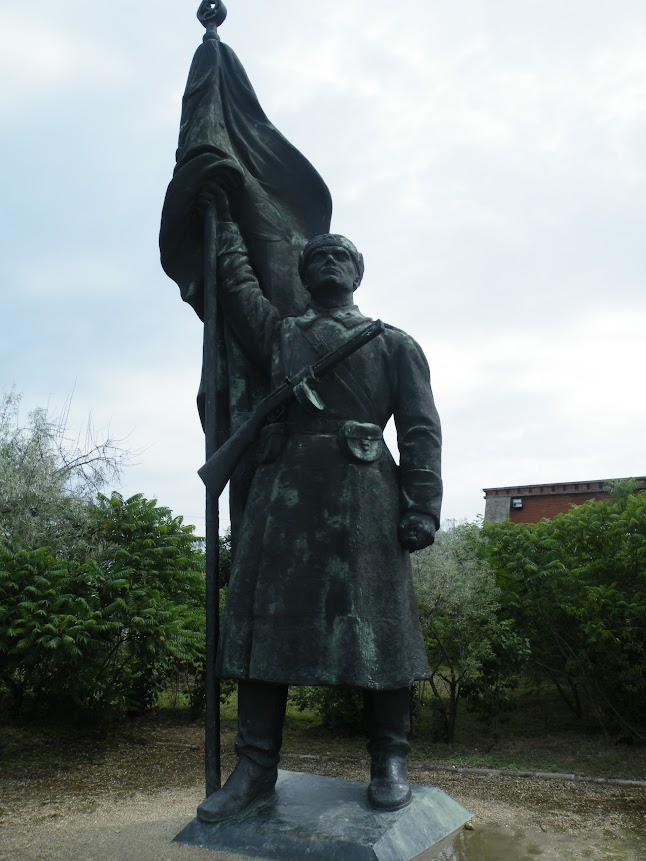 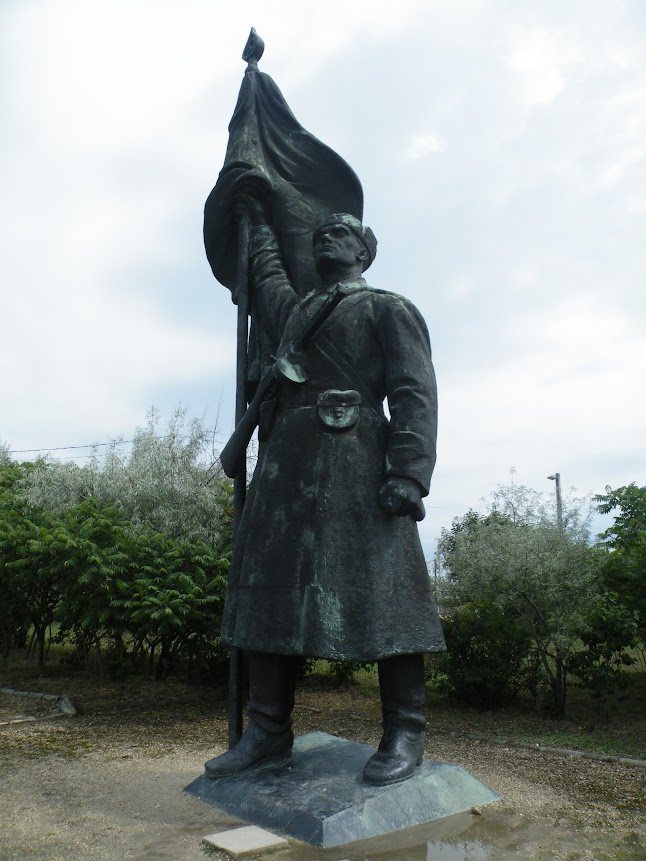 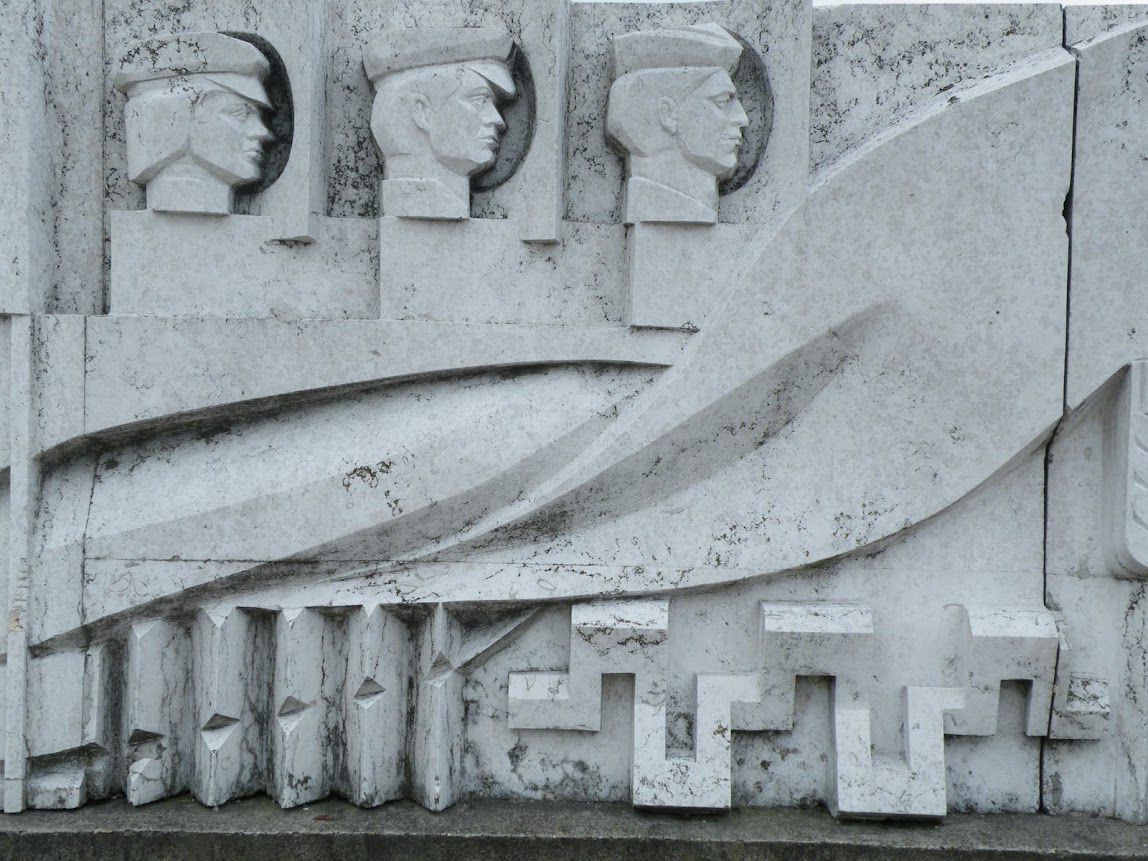 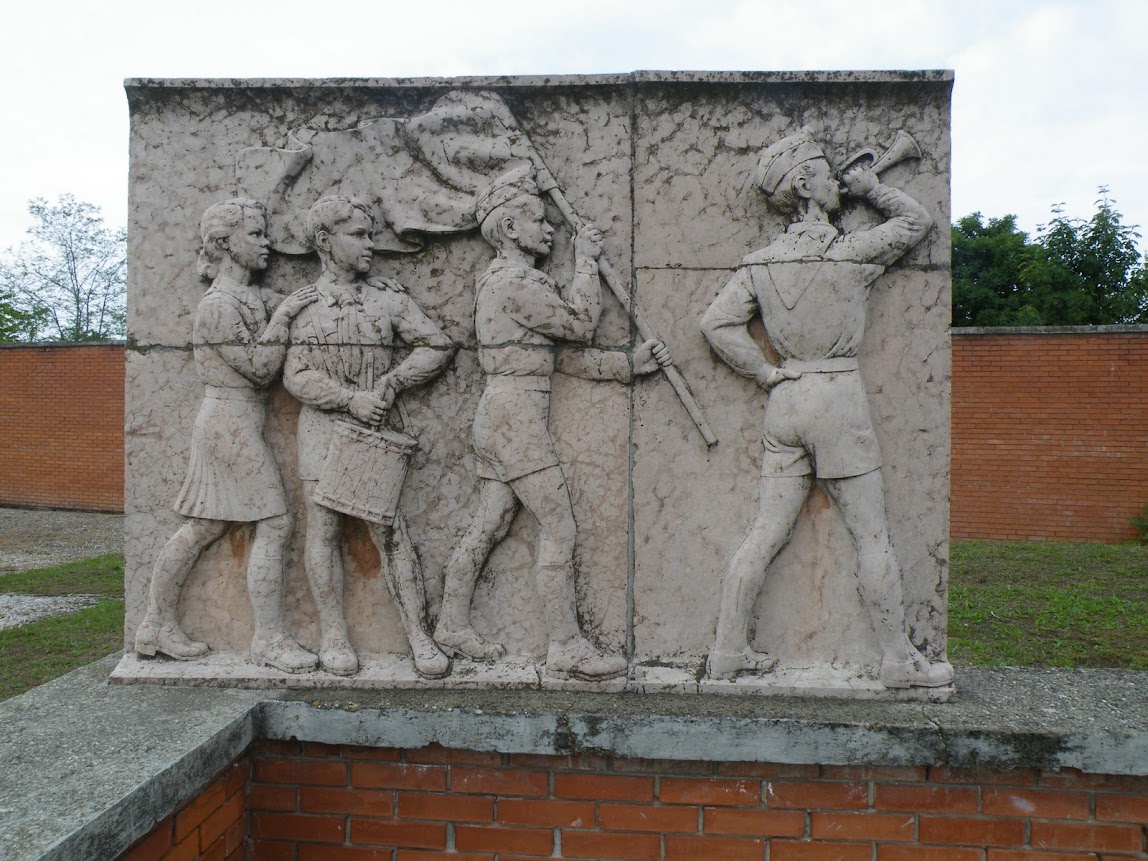 Stalin's Boots (all that was left after a crowd pulled the enormous statue down during the 1956 Uprising): 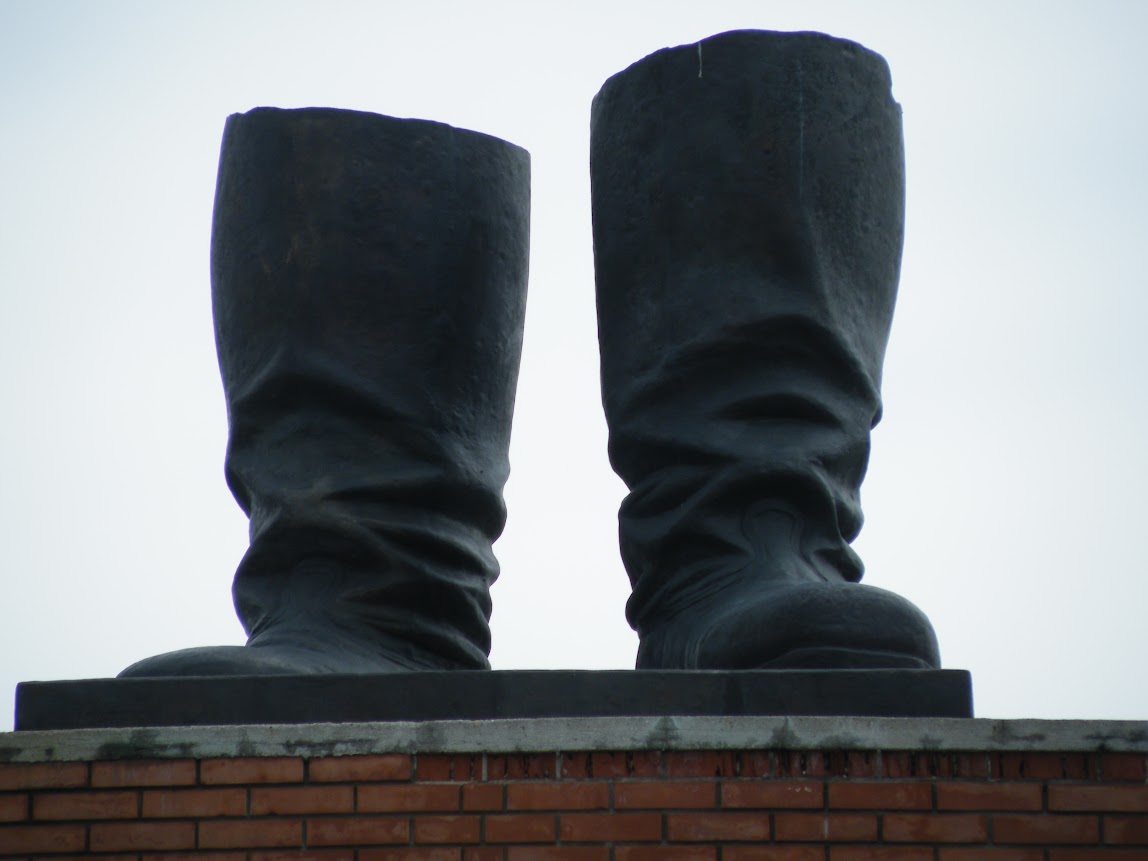 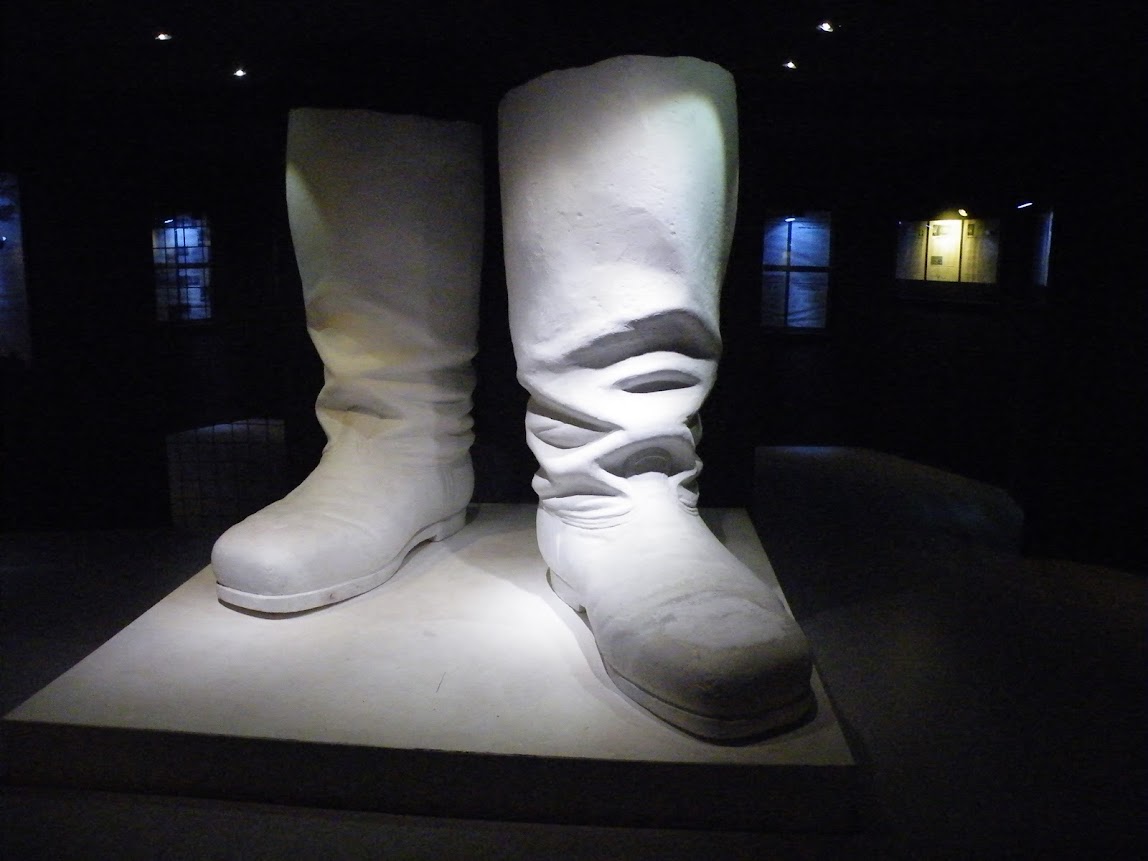 While waiting in Újbuda-központ for the bus to Memento Park - you can make a short detour to the Allee shopping centre. Head north on Fehérvári út toward Október huszonharmadika u., 35 m. Turn right onto Október huszonharmadika u., 190 m. The Allee, Október huszonharmadika utca 8-10, is good for having coffee or a light meal (the Guru restaurant). A bit before the mall, you pass through the Locals Market (Vasarcsarnok), Október huszonharmadika utca, 1117 Magyarország. A brilliant place to see the locals shopping produce, and upstairs, real authentic local food and drink places, full of locals, with local prices and delicious food. The building itself is unique:  a box - shaped building with an inner pyramid. The terraced stores are hidden. Vegetables, fruit, bread, meat, dairy products, cakes are not only available in the various stores, but they can be purchased from around 100 urban farmers. The upstairs bar offer food and drink, real Hungarian dishes (fried sausage, black pudding, stuffed cabbage) , not only nicer but cheaper than in restaurants. Mainly local people do their daily, weekly shopping here. Everyone is very friendly towards foreigners but please be aware: English is not spoken:

The bus passes through Bocskai út westward and arrives to Kosztolá nyi  Dezső tér. On the right side there is a park with the Feneketlen tó (Lake without a bed) (bottomless lake)  in the middle, which according to legend is very deep. In the wwest side of the park the famous Hemingway cafe'/restaurant. The bus turns south to Vincellér utca. From there it continues north-west, turns more to the south and continues west along several busy streets. When it arrives onto Harasztos út - you see on your left the Amerikai katonai temető - a cemetery of American soldiers killed in Hungary during WW2. A monument is erected in the middle of the small park memorizes their glory. There are graves in the garden but the bodies of british pilots and american soldiers were brought back home by the end of 1946. This street continues as  Brassó út. The bus continues southward alond Sasadi Utca. This street terminates at Budaörsi Way. In this bustling junction stood the statue of Captain Ostapenko  until the late eighties. Ostepenko was a Soviet Red Army soldier. The memorial is now at Memento Park:

The whole area east to Balatoni street (Vőfély St, Kérő utca) is a typical So
viet housing buildings made with industrial pre-fabricated panels. They were built  between 1972 - 1984. Approx. 20% of the Hungarian population still lives in concrete panel-type flats. The forced industrialization resulted in that the population moving to the cities from 1970s onwards,  and this has caused housing shortages. To solve the problem - a sort of building technology had to be used which had to be a quick and inexpensive way to build homes. In many cases, the homes kitchen furniture, complete with bathrooms and cupboards were pre-fabricated in factories, and they were installed in buildings with concrete elements. Most of the flats are only of 1.5 - 2 bedroom homes. The buildings were normally surrounded by health and educational institutions, restaurants, service centers, which have been completely transformed into other uses. The result was a huge number of low level quality flats. Most of them are occupied by low-level income people: 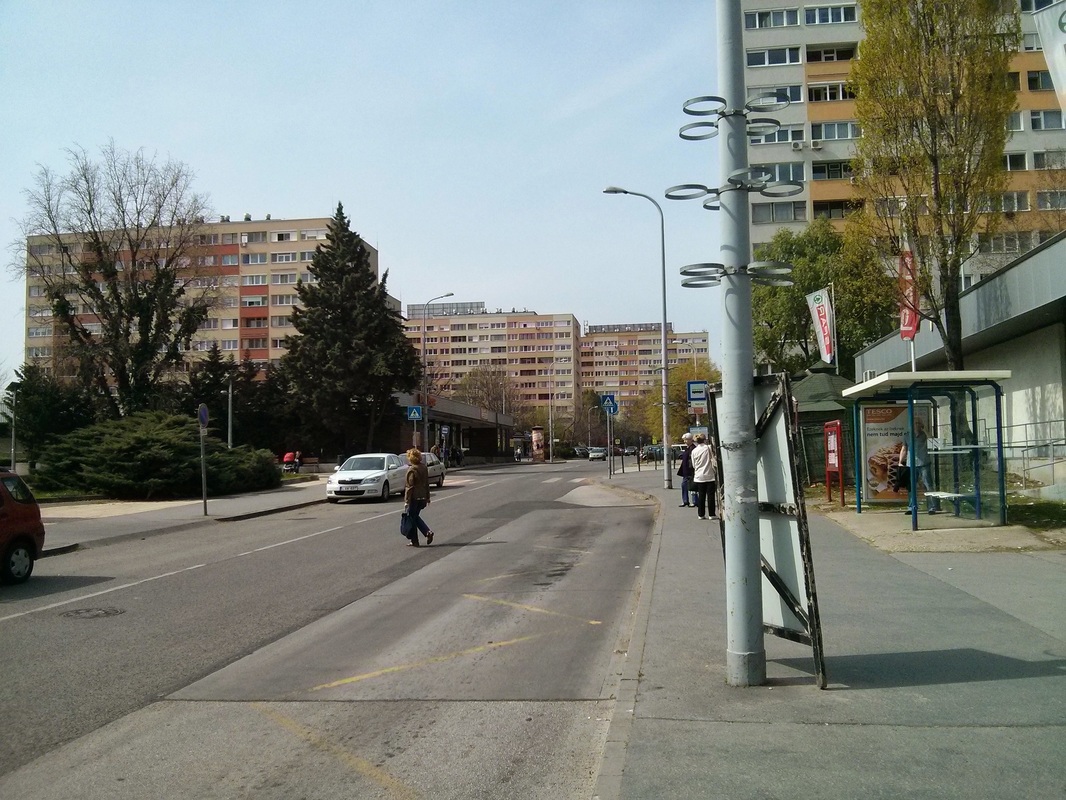 More eastward is the Kelenföld vasútállomásmore Metro M4 (green) line station. A brand-new Metro station (opened in Spring 2014). With M$ line you can travel to/from Keleti railway station. Line 4 isn't connected to any other metro line. At Keleti pályaudvar, the station of line 4 isn't connected to line 2 via an underground passage, but just via the (partly open) mezzanine level. This is the departure place of number 150 bus that takes you to Memento Park. The number 101 bus also departes from here to Memento Park but its service is only available in the weekdays and after 13.00;
‎ 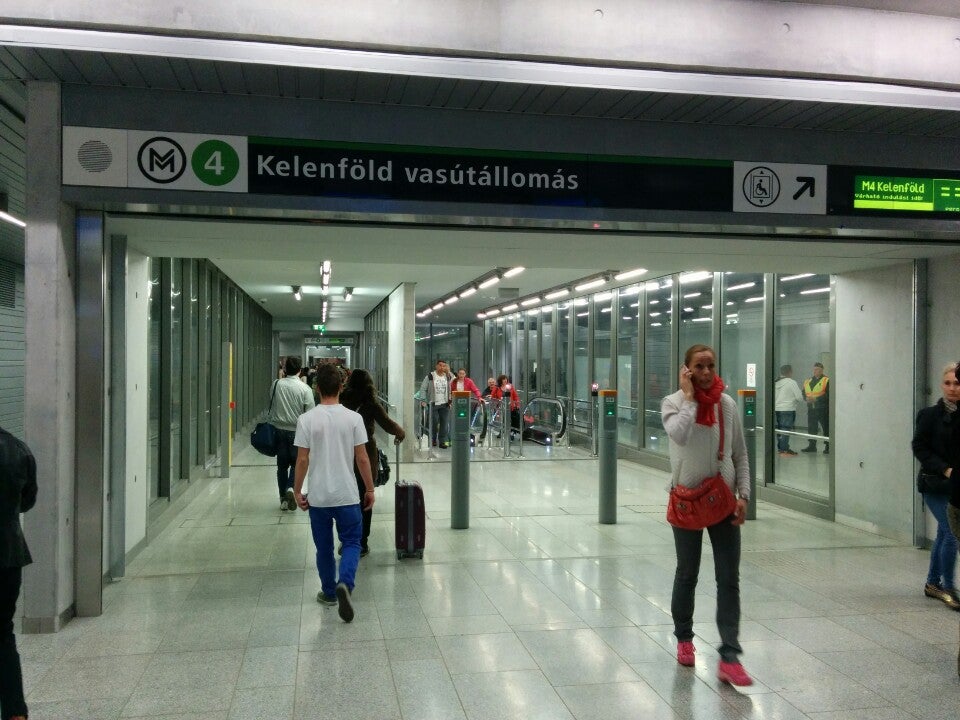 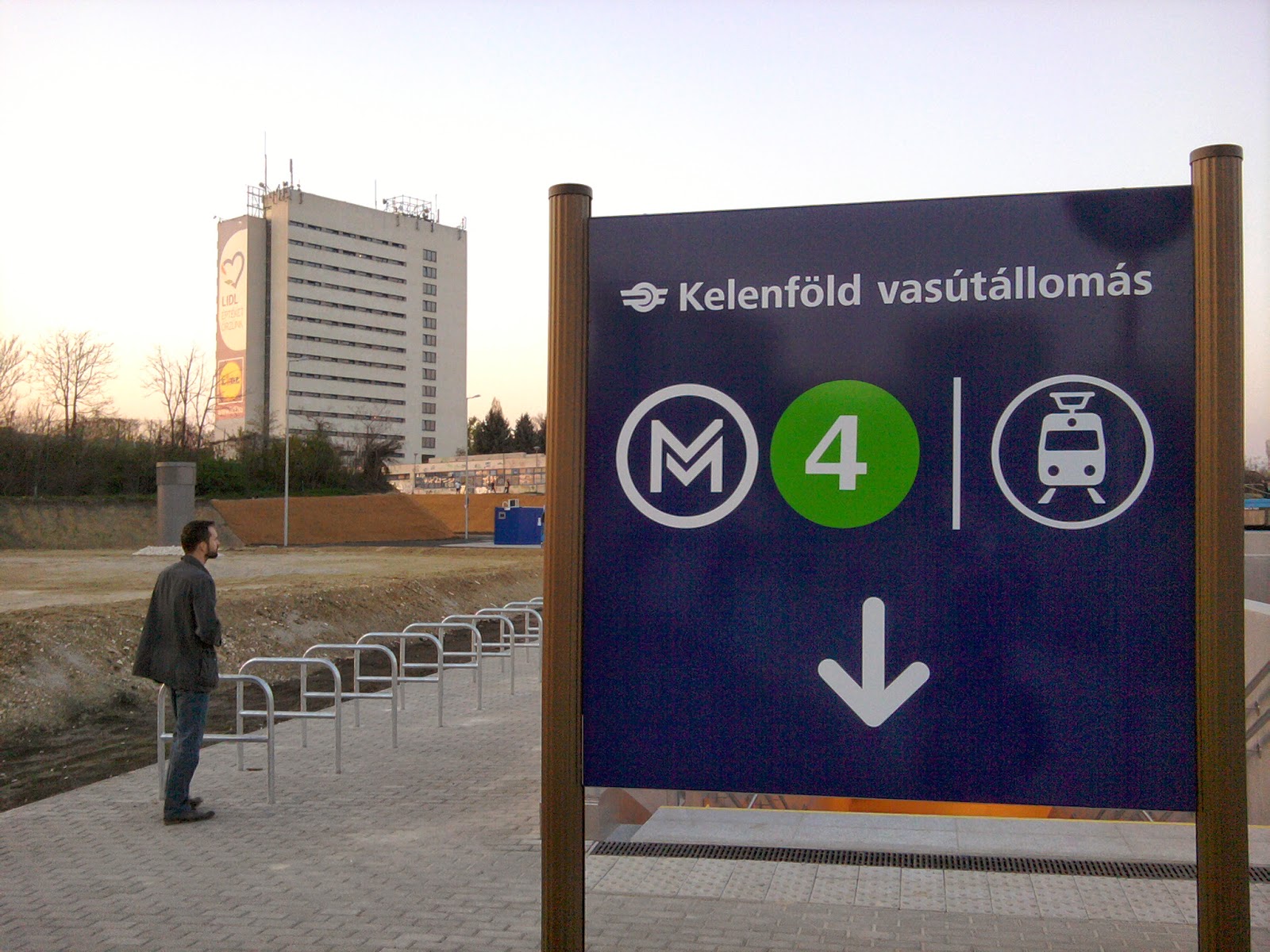 We head southward to Péterhegyi út. On our right we pass through Igmándi utca,

Őrmezei út and Bolygó utca,. WE turn eastward to Olajfa utca.
The surroundings are more rural:

We turn left (south) to Horogszegi határsor and ride southward along this street until its end. WE continue to the south along Tordai út.  We continue southward along the Balatoni street, pass through the Elza utcai játszótér (small park of Elza Street)

and arrive to Memento Park.