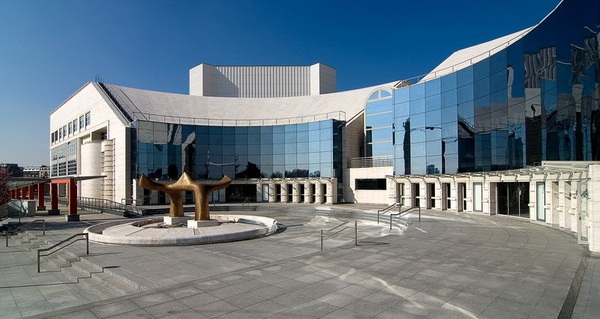 on the western side Eurovea Galleria shopping center and five-star Sheraton Bratislava,

on the east side New shopping centers and apartments River places, 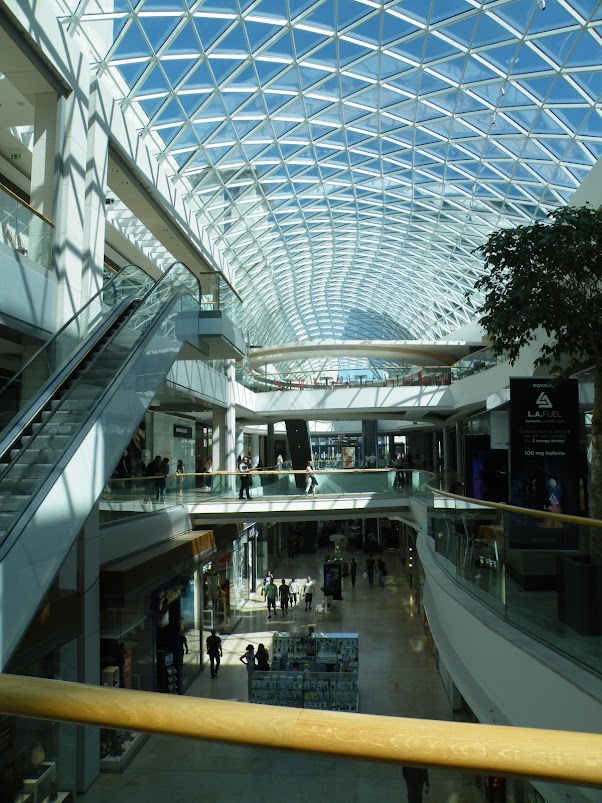 South side of the square is lined with the Danube waterside promenade. MR Štefánika Square is actually part of the modern district Eurovea , which is located right on the bank of the Danube in the vicinity of the historical center of Bratislava. The name of the square was originally Theatre Square. Definitely pay a visit and check out the beautiful pedestrian walkway along the Danube river. Our direction is from the east to the west (heading, next, to the Hviezdoslavovo námestie) - so, on our way we walk along the promenade:

Most of the statues that Bratislava has become quite famous for can be found near the Main square (see the blog "Bratislava Old Town (Starý Mesto) Centre Walk 1"). But, there are also some private statues in front of and inside the Eurovea shopping center and promenade. Go there if you have some spare time to walk along the Danube and the long venue with restaurants and bars. Recommended !: 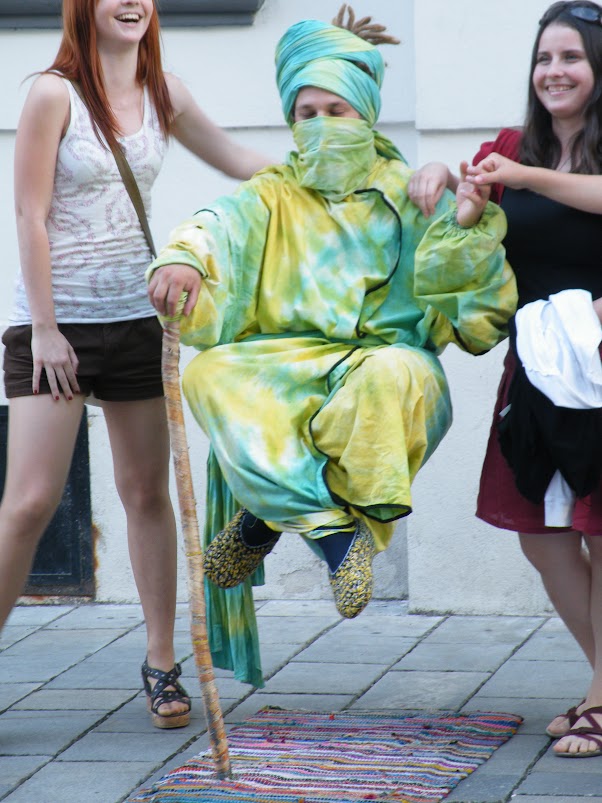 The number of fountains in Bratislava is comparable to the four times larger neighboring Austrian capital Vienna. A few of them are around the Štefánika Square and the Eurovea complexes. Very interesting is the fact, that shopping mall is also under the ground and the main fountain is built on it's transparent roof: On the south side of the square, on the Danube River, stands a a bronze statue of General Milan Rastislav Stefanik (Vice-Chairman of the Czecho-Slovakian National Council and the first minister of war of Czechoslovakia), created by a Czech sculptor Bohumil Kafka. The huge (7.4 m) bronze statue of Štefánik is behind a high pylon with the bronze lion holding the coat of arms of Czechoslovakia. On the pylon is a bronze reproduction of the Czechoslovak Declaration of Independence of 30 May 1918: 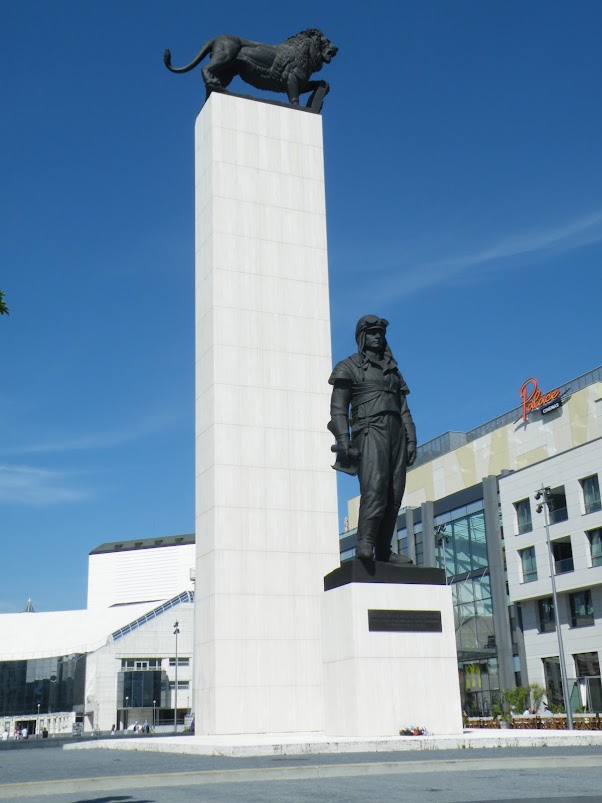 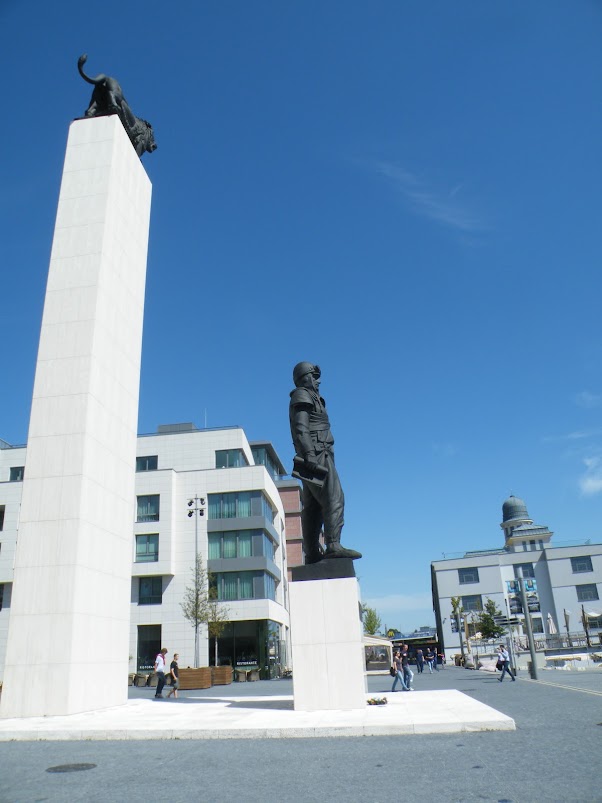 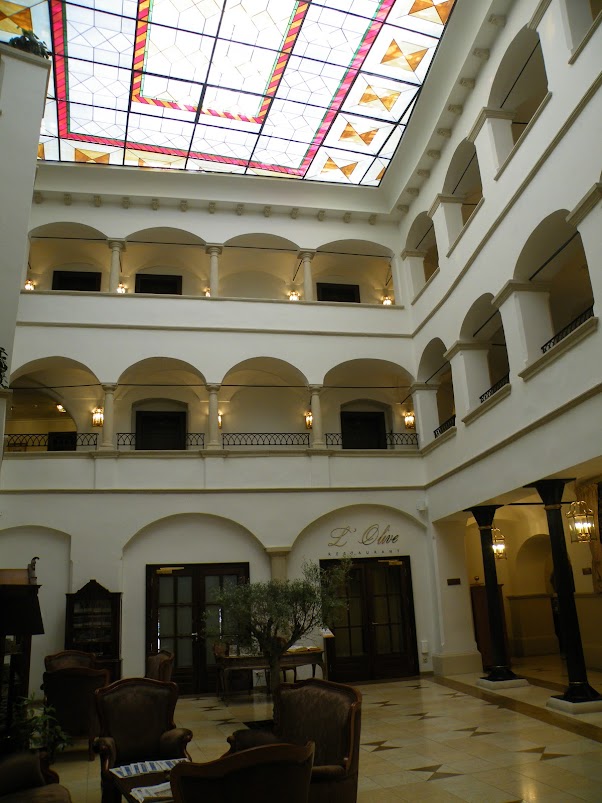 New Slovak National Theater, Pribinova 17 is situated near the banks of river Danube near Eurovea Shopping Mall. The NEW building of Slovak National Theatre provides space for drama, opera, concerts and other cultural events. The large modern theatre building,  near the Danube, was opened on 14 April 2007. The fountain in front, was designed by Alexander Biľkovič, Iľja Skoček and Peter Bauer: It is a 1.5 km. walk to our next destination - another famous square - Hviezdoslavovo námestie. Head west toward Olejkárska, 120 m. Continue onto Pribinova, 350 m. Continue onto Dostojevského rad, 45 m. Continue onto Šafárikovo námestie, 20 m. Note the Park and the Fountain (Duck Fountain, Kačacia fontána, 1914, Robert Kuhmayer). Note also the fairy-tale pink buildings in the square (Art- Nouveau apartment building built after 1904): Continue onto Vajanského nábrežie, 450 m. Continue onto Námestie Ľudovíta Štúra, 55 m. Ľudovít Štúr (1815 - 1856) was the author of the Slovak language standard language. Note the monument with a bronze sculpture with a statue of Štúr with several figures behind him. Sculptor: Tibor Bártfay, a Slovak sculptor. Note: we'll return to this square in the end of this route:

Continue onto Rázusovo nábrežie, 150 m. Turn right onto Riečna, 80 m. Turn left toward Hviezdoslavovo námestie. Hviezdoslavovo námestie is the biggest square in Bratislava down town. Is very popular place for the foreign and also domestic tourists and local residents of Bratislava. Beautiful place with statues, elaborate, ornamental water fountains and cafes. The people can find here a wealth of very good restaurants (many of them a bit overpriced !), the best ice cream and many seasonal festivals including new year markets. There are a lot of sitting places for chilling. It is tree lined which provides shade in the summer and leaves all over the place in Autumn. This is a very nice alongated square with a long pedestrian-only paths/roads. There are several embassies along the square. kill, here, an hour or two ! The square underwent major reconstruction at the end of the 20th century. Before reconstruction, it looked like a small city park; now it looks like a city promenade. On February 24, 2005 US President George W. Bush gave a public speech in Hviezdoslav Square during his visit to Bratislava for the Slovakia Summit 2005 with the president of Russia Vladimir Putin: 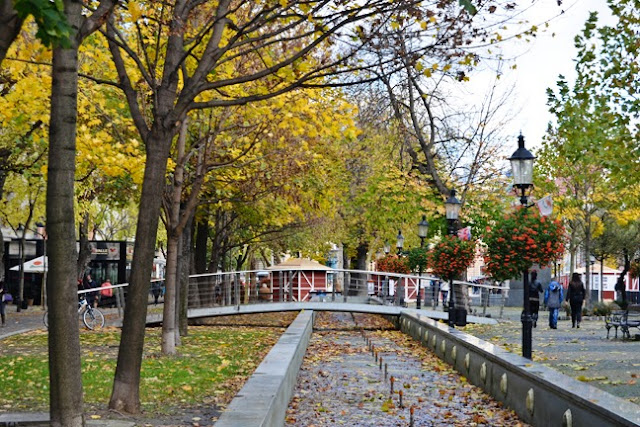 Bratislava native sculptor Victor Tilgner crafted the famous Ganymede's Fountain (Ganymédova fontána) in 1888, now located immediately in front of the theatre. This is the first decorative fountain in Bratislava from 1888. It is also the first one to be fed filtered water from the Danube. It was inspired by the mythological Ganymede (Greek Myth) combined with the depictions of species common in the local part of the Danube: frogs, turtles and various fish: 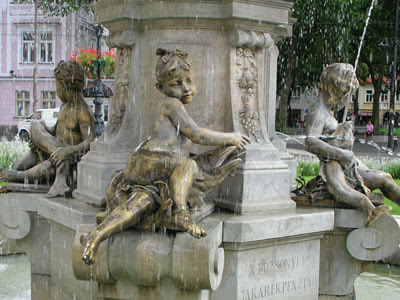 Close to the theatre is the larger-than-life-sized statue of Hviezdoslav. Pavol Országh de Felsőkubin Hviezdoslav (February 2, 1849 - November 8, 1921) was a Slovak poet, dramatist, translator and for a short time member of the Czechoslovak parliament:

In the south-west edge of the Hviezdoslav square (opposite the El gaucho restaurant - see our "Bratislava Old Town (Starý Mesto) Centre Walk 1" blog) there is a statue of famous fairy tale author Hans Christian Andersen. About Bratislava he said: "If you want a fairy tale, your city should be a fairy tale itself". After his visit in Bratislava he produced some of his masterpieces such as The Little Match Girl: 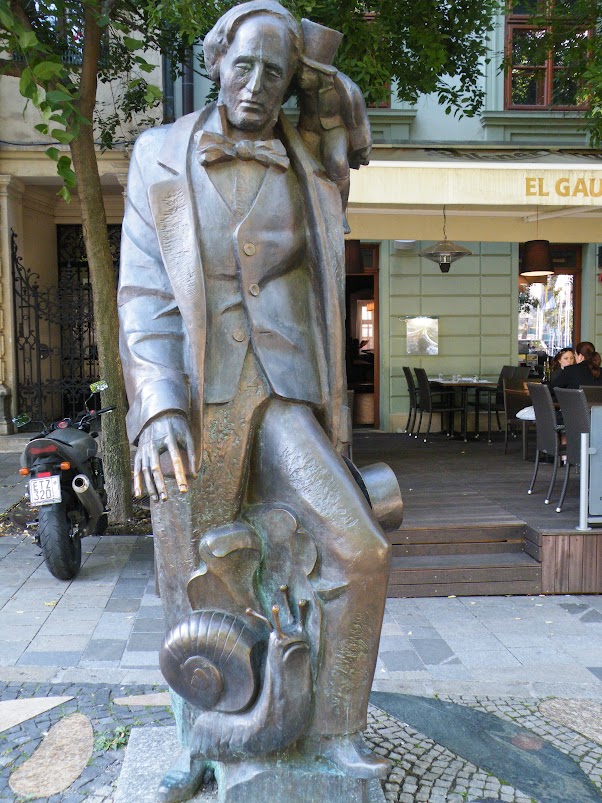 Dievca (Maiden) Fountain: the tender-hearted Girl with a deer in front of Hans Christian Andersen sculpture on Hviezdoslavovo Square in Bratislava:

On the southern side are the Radisson Blu Carlton Hotel,

as well as the German and American embassies: 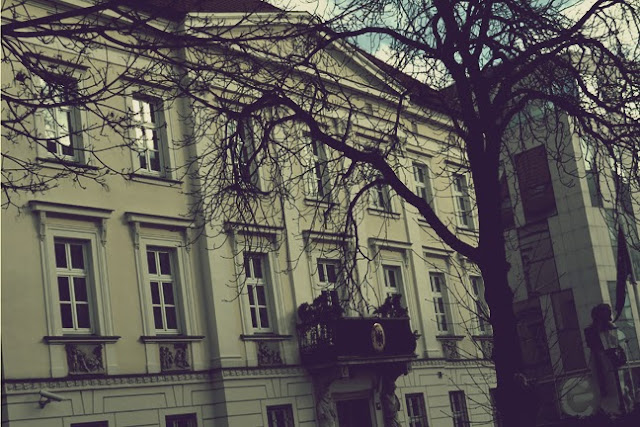 We leave the Hviezdoslav square from its south-west exit/entry. 40 m. further south is the Rybné námestie (Fisheries square). It is situated at the most western edge of the historic zone of Bratislava. Rybné námestie is a space which is bordered on the east by the Hviezdoslavovo Square, in the south is the Danube embankment, in the west there is a rising ramp of the SNP Bridge; the northern boundary is the western wall of the house, which houses the International House of Art for Children Bibiana. This square was significantly affected by the construction of today's SNP Bridge in 70's of the 20th century.

The Plague Column, in this square,  was built in 1713 as a reminder of plague: From Rybné námestie we head south on Rybné námestie toward Rázusovo nábrežie, 30 m. We turn left onto Rázusovo nábrežie, 350 m., slight left onto Námestie Ľudovíta Štúra, 15 m. On your left is the Esterhazy palace (Esterházyho palác) with the National Gallery (Slovenská národná galéria). The Slovak National Gallery (SNG) is defined as the supreme and central gallery institution of Slovakia. The building looks a bit run-down (an old palace disfigured by communist architecture). The main part of the gallery might be closed due to the reconstruction. Although the exhibitions are small in size, lovers of art can find them interesting. Monday: Closed. Open: TUE - SUN: 10.00 – 18.00, THU: 12.00  – 20.00. The Gallery is Closed on: Easter, 1 November – All Saints' Day, 24 - 26 December – Christmas. Entry Price: In 2015, free - free admission ! (it is under renovation): 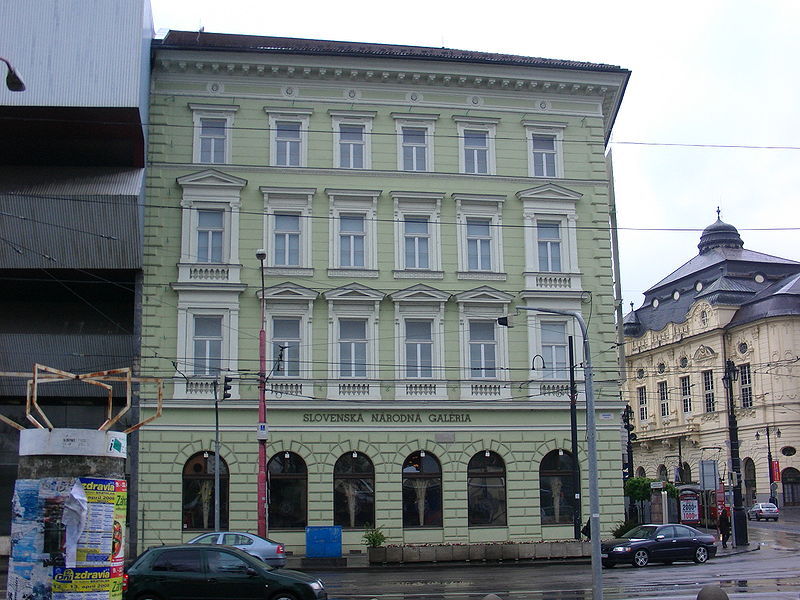 Here, you find, also, the Malecon -  a High-end bar, with the best latino atmosphere and a  restaurant with top notch staff and service. Usually you find the "creme de la creme" hanging out at Malecon.

We return to Michael's Gate and Tower (see "Bratislava Old Town (Starý Mesto) Centre Walk 1" blog)  with a 700 m. walk. From Námestie Ľudovíta Štúra head west 15 m. Turn right to stay on Námestie Ľudovíta Štúra, 20 m. Continue onto Mostová, 190 m. Turn right onto Jesenského, 20 m. Turn left onto Hviezdoslavovo námestie, 50 m.  Continue onto Rybárska brána, 120 m. Continue straight onto Hlavné námestie, 50 m. Continue onto Sedlárska, 100 m. Turn right onto Michalská, 150 m. and the Michalská brána is on your right. The late afternoon or evening hours are the best to explore Michael's Gate surroundings. Sandstone Baroque sculpture of St. John of Nepomuk at the NORTH side of the Michael's Gate is probably the work of Louis Gode (d. 1750). The sculpture was restored by sculptors Andrej miners and Ladislav Chamuty: 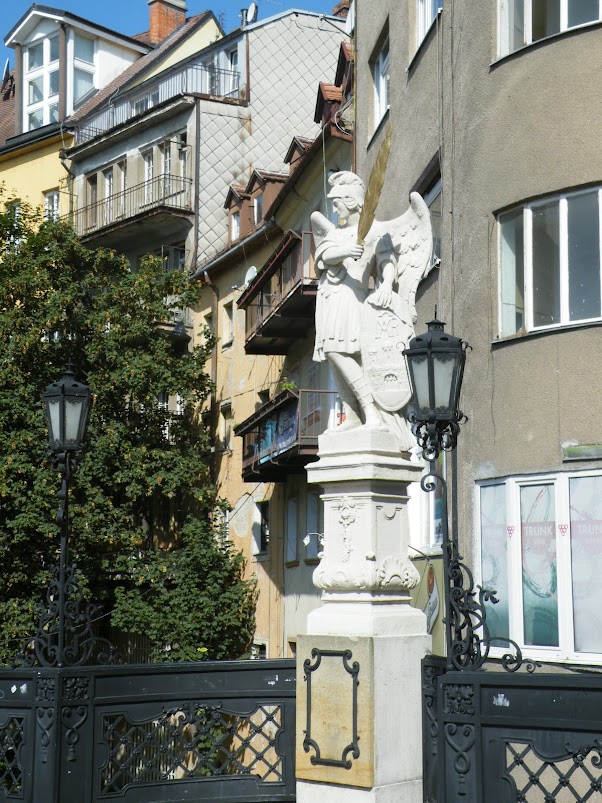 Stand on the balcony/bridge near the statues and look downstairs. There is a nice garden with an orchestra or musical group (usually, during the weekends). Splendidg atmosphere ! If you are lucky - you'll experience Balkan music with instruments like: Mandolins and Balalaikas.