Orientation: This section is considered the easiest on the Capital Ring, and is almost entirely on level tarmac paths and pavements. It explores the once very industrial area of Beckton, some former docks and alongside the river Thames to the foot tunnel at Woolwich.

The text has been copied from the Capital Ring official site (with a few minor modifications):

The link to this walk map:

Points of interest: DLR stations, University of East London Campus, Royal Albert and King George V Docks, Royal Victoria Gardens, a walk alongside the River Thames and the Woolwich Foot Tunnel.
There are cafés and pubs at Cyprus and North Woolwich.
There are train stations at Canning Town, Royal Albert, Beckton Park, Cyprus, King George V and Gallions Reach, all on the Docklands Light Railway, and Woolwich Arsenal on National Rail, as well as bus routes along the way.
This area looks very modern, with high rise blocks of flats and the elegant student accommodation at the University of East London. However until about 30 years ago it was a busy commercial dockland, with large ships coming here to load and unload their cargoes. London’s main freight terminal is now 15 miles (24km) further downstream at Tilbury.

I recommend that you stop at Canning Town station - taking some photos around: 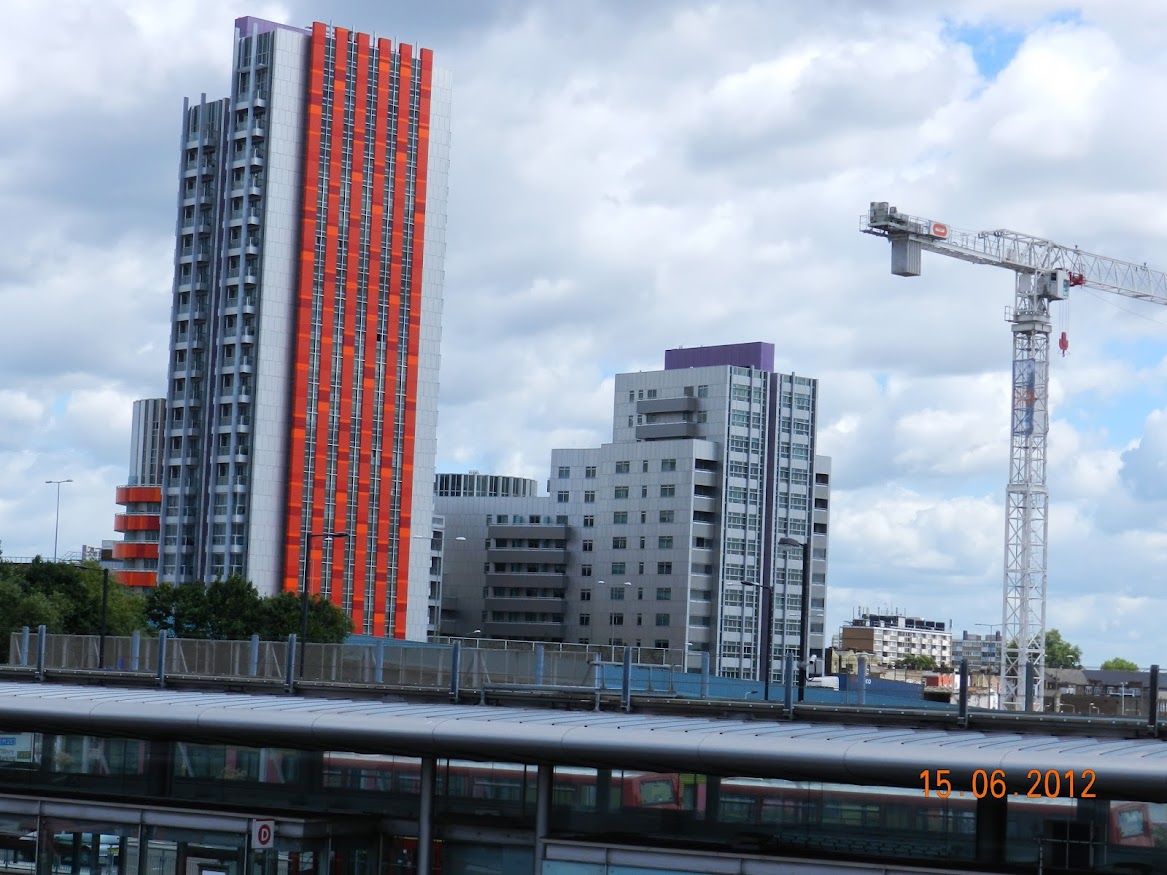 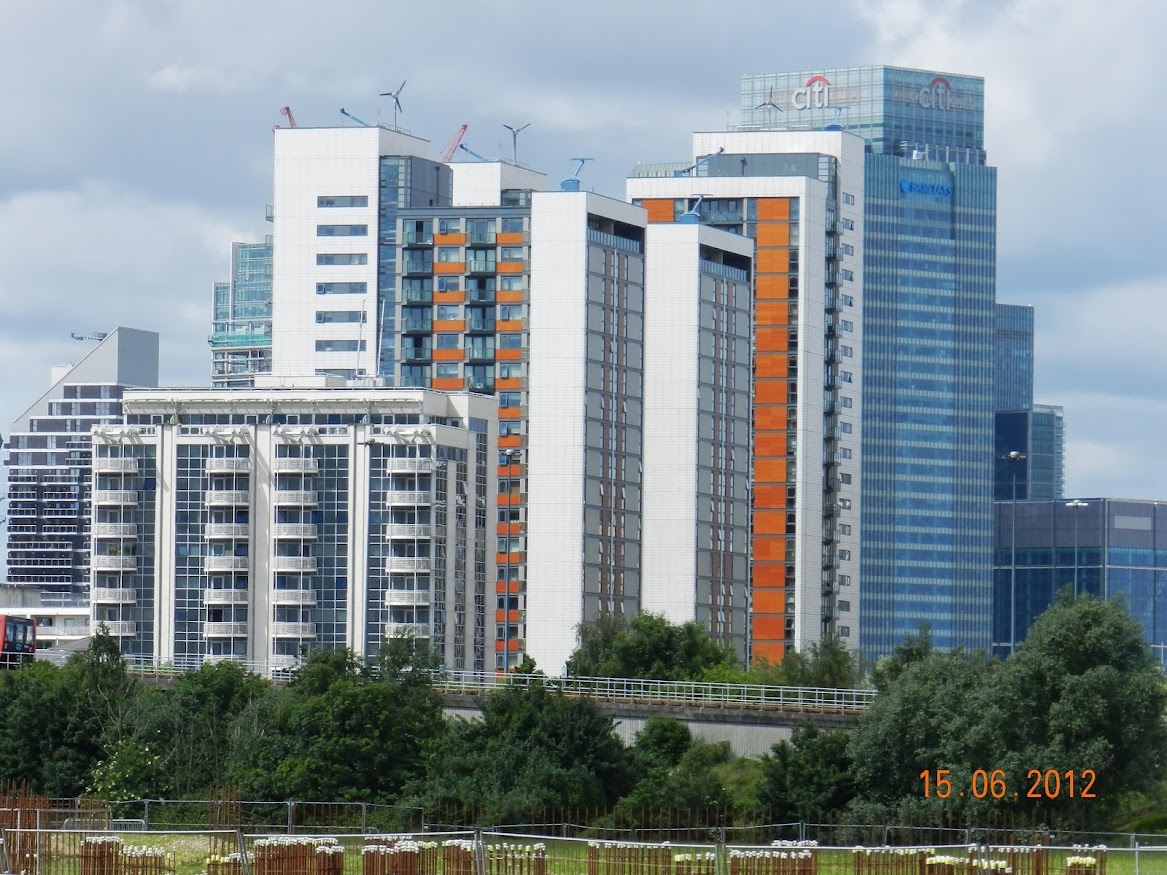 Take the DLR and continue to Royal Albert DLR station - again taking photos around. Good location to view: sculptures garden, the take off and landing of aeroplanes from London City Airport, Boats rowers on the Thames (close to London Regatta Rowing Centre). With waterfront seating area: 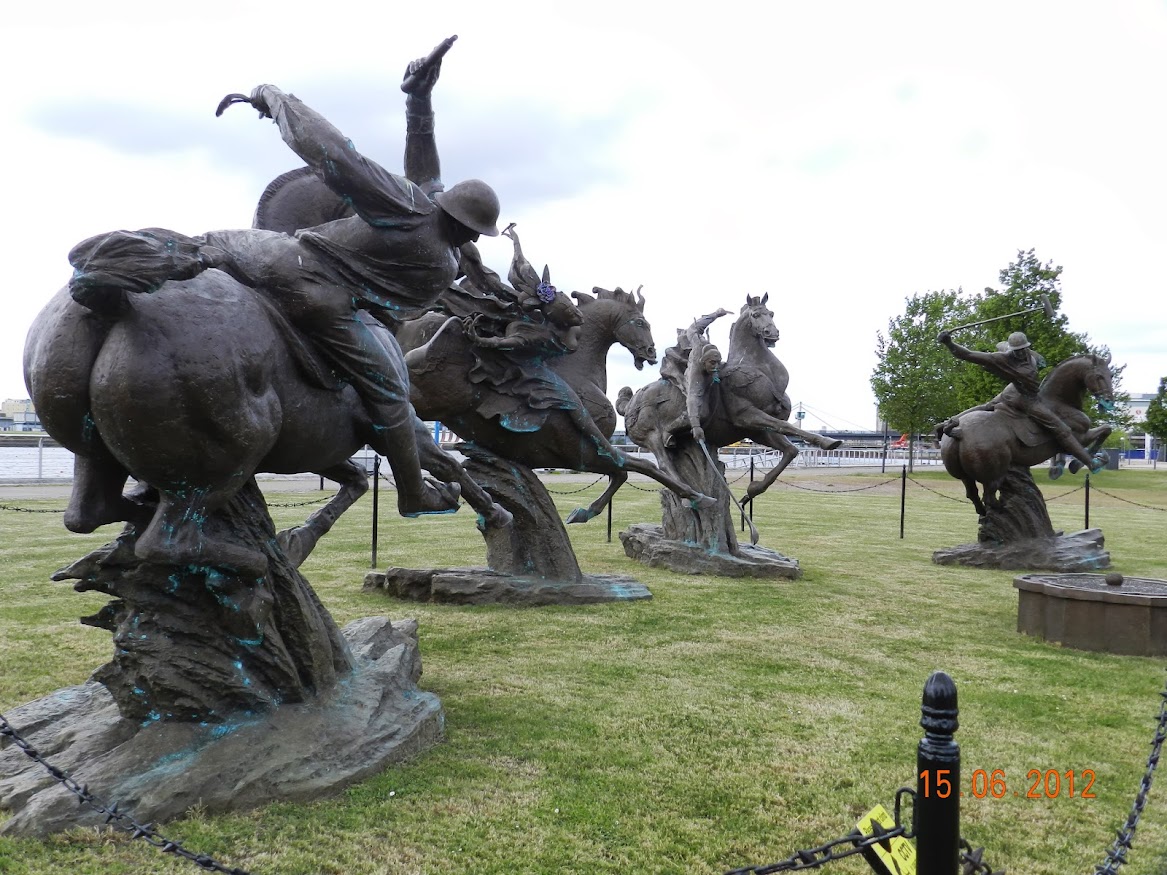 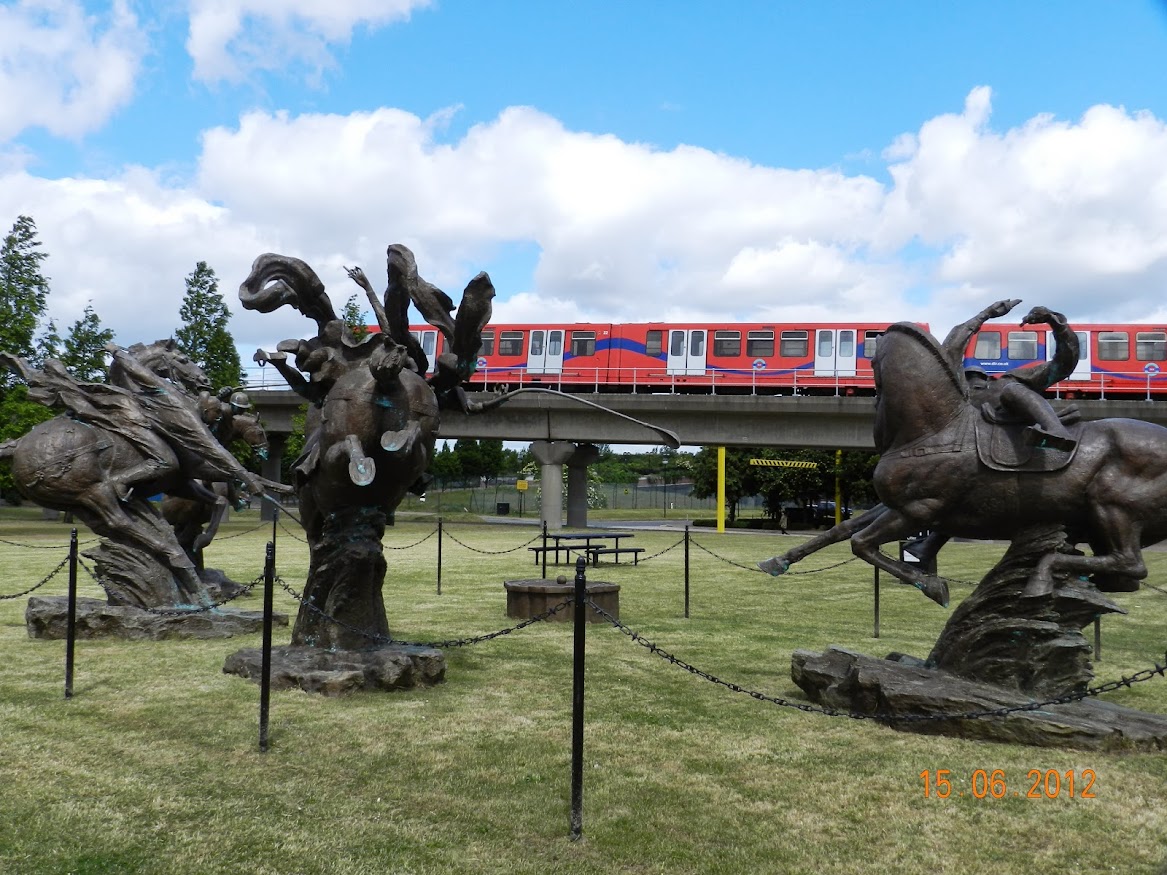 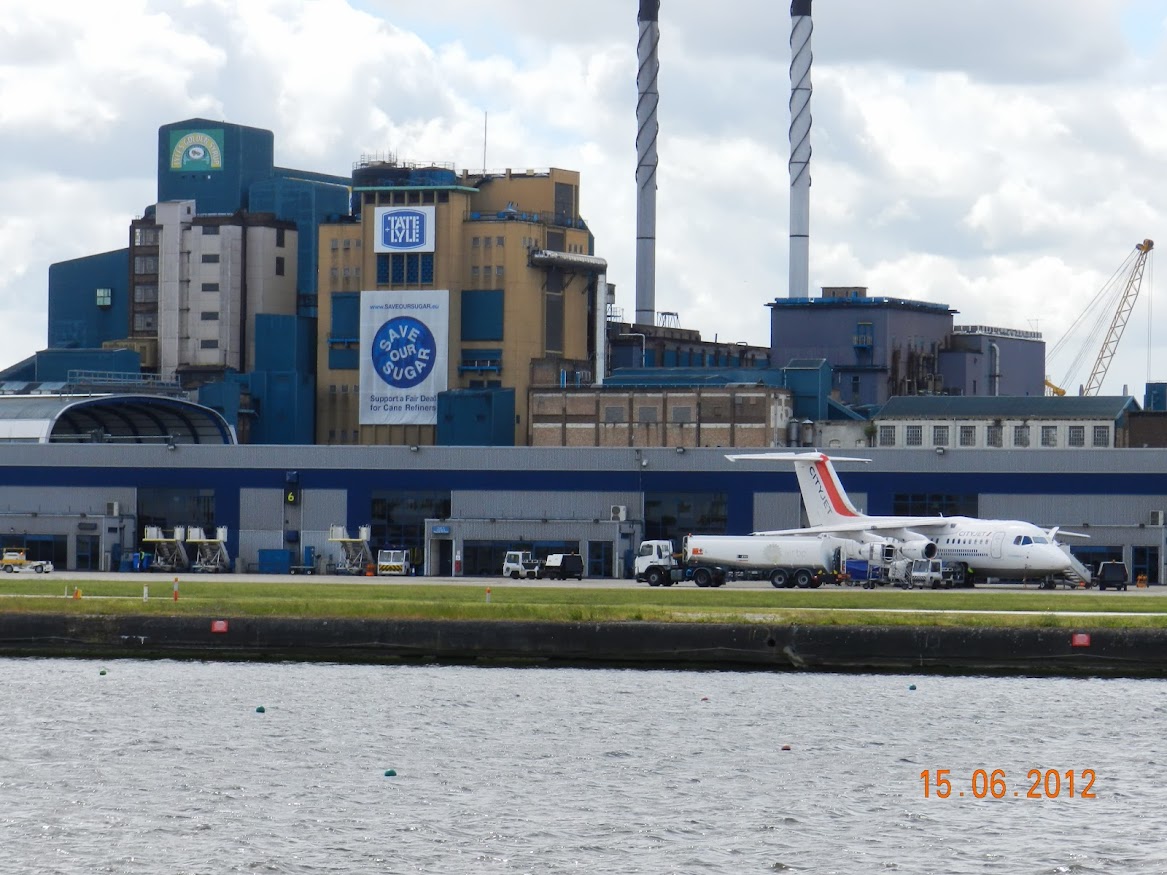 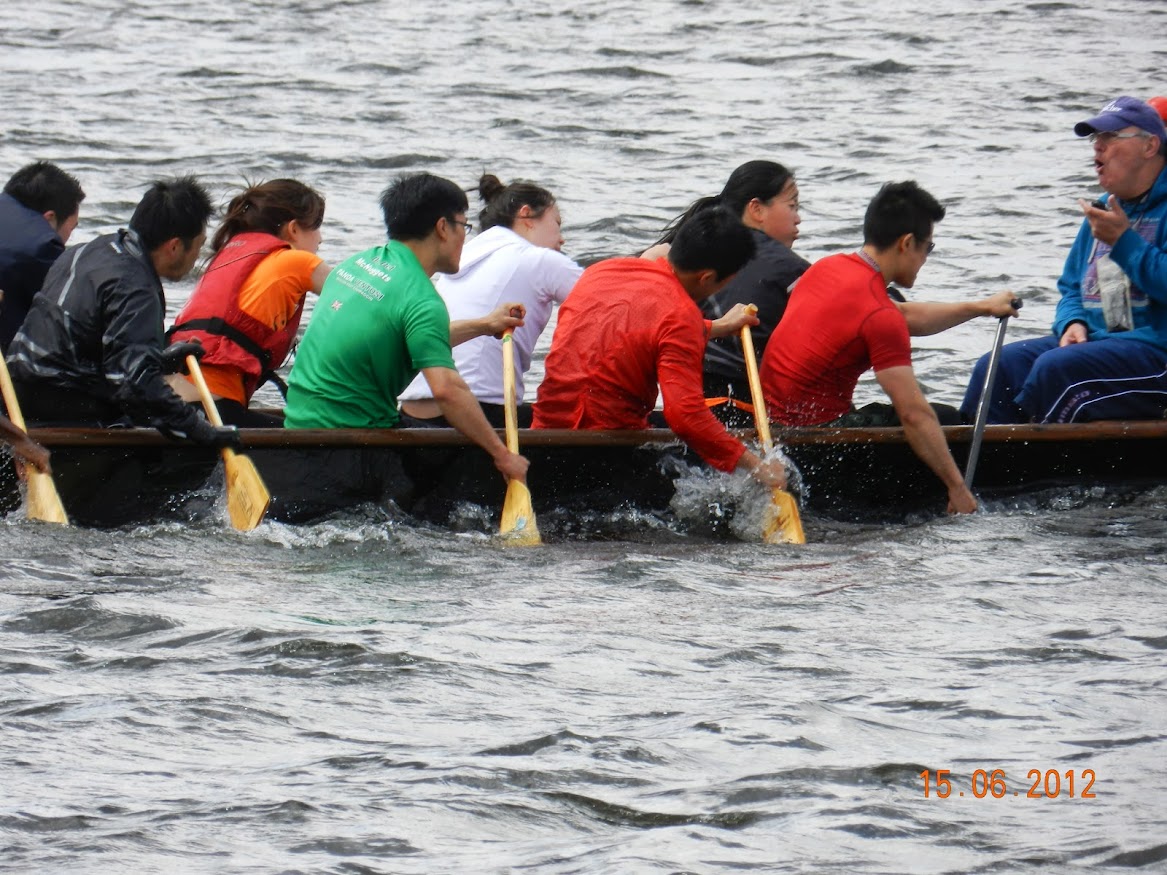 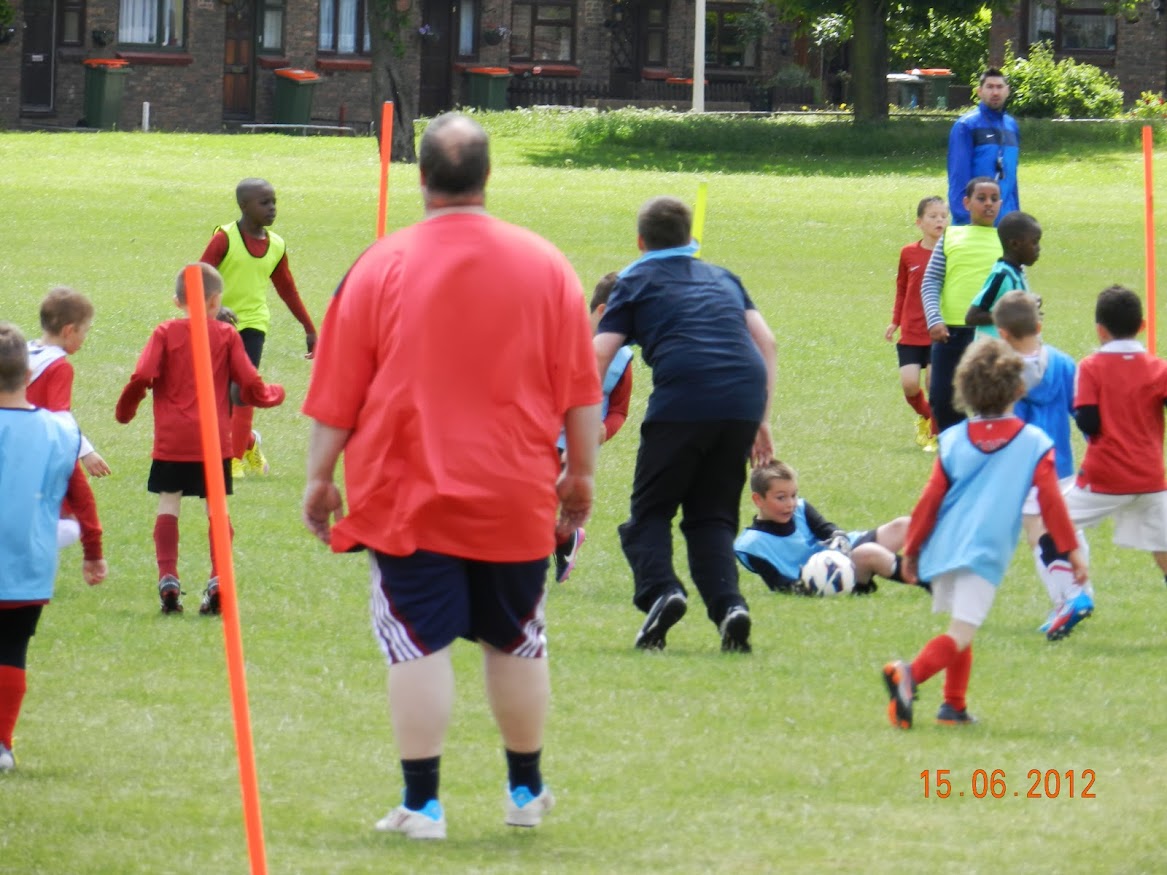 Carry on to emerge between houses, and continue along Savage Gardens, beside New Beckton Park. In 200m, opposite Oakes Close, turn right along a path across the park, past a children's playground and then left in front of some houses. Follow the path ahead past a primary school until it meets East Ham Manor Way. Turn right here.
At the mini roundabout, turn right and cross over to the left on a broad path between shrubs to the forecourt of Cyprus Station.
Cyprus station is named after the nearby Victorian estate of Cyprus, itself named after the British colonisation of that Mediterranean island. This is the station for the University of East London (UEL).
Cross the campus, ahead is Royal Albert Dock, which was active from 1880 to 1981, and now an international rowing course. The Capital Ring now follows the dockside. Go over the bridge through the campus and student accommodation with its butterfly-shaped roofs. There is also a student café and toilets here. 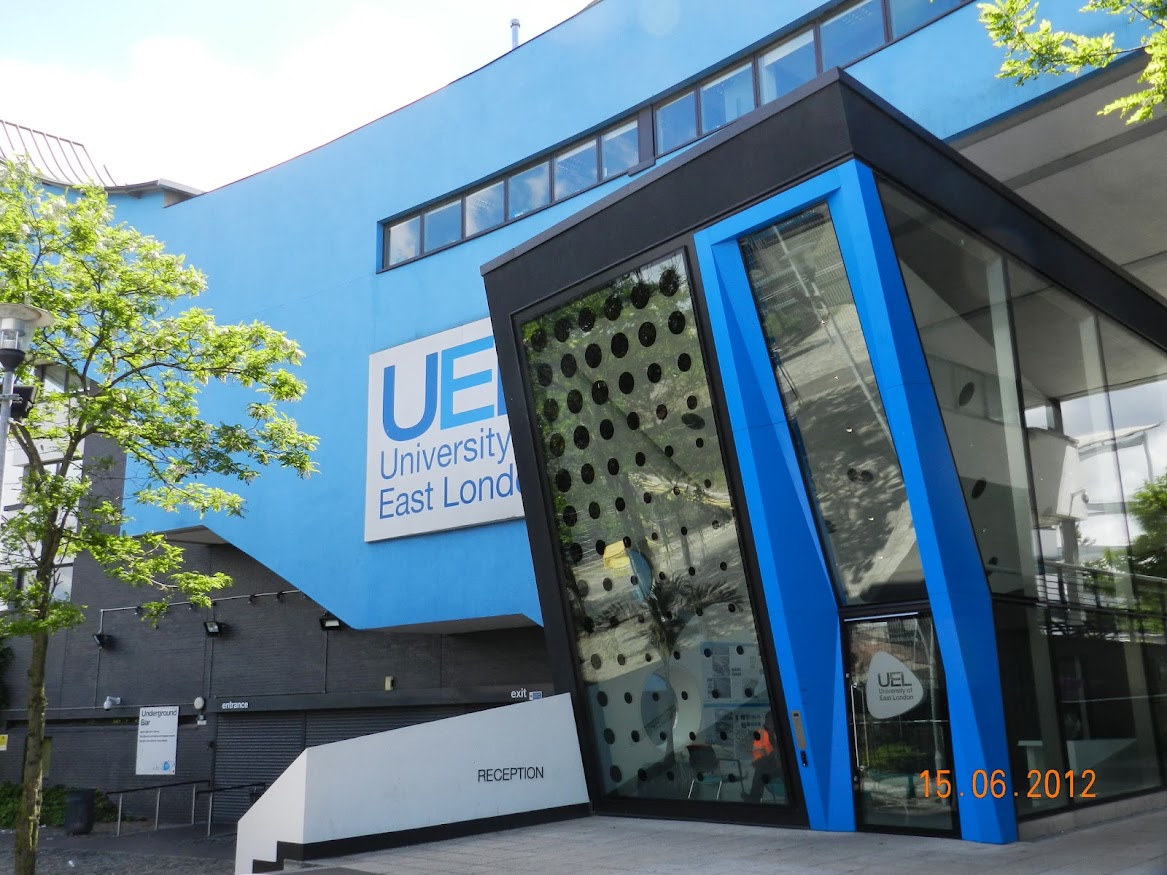 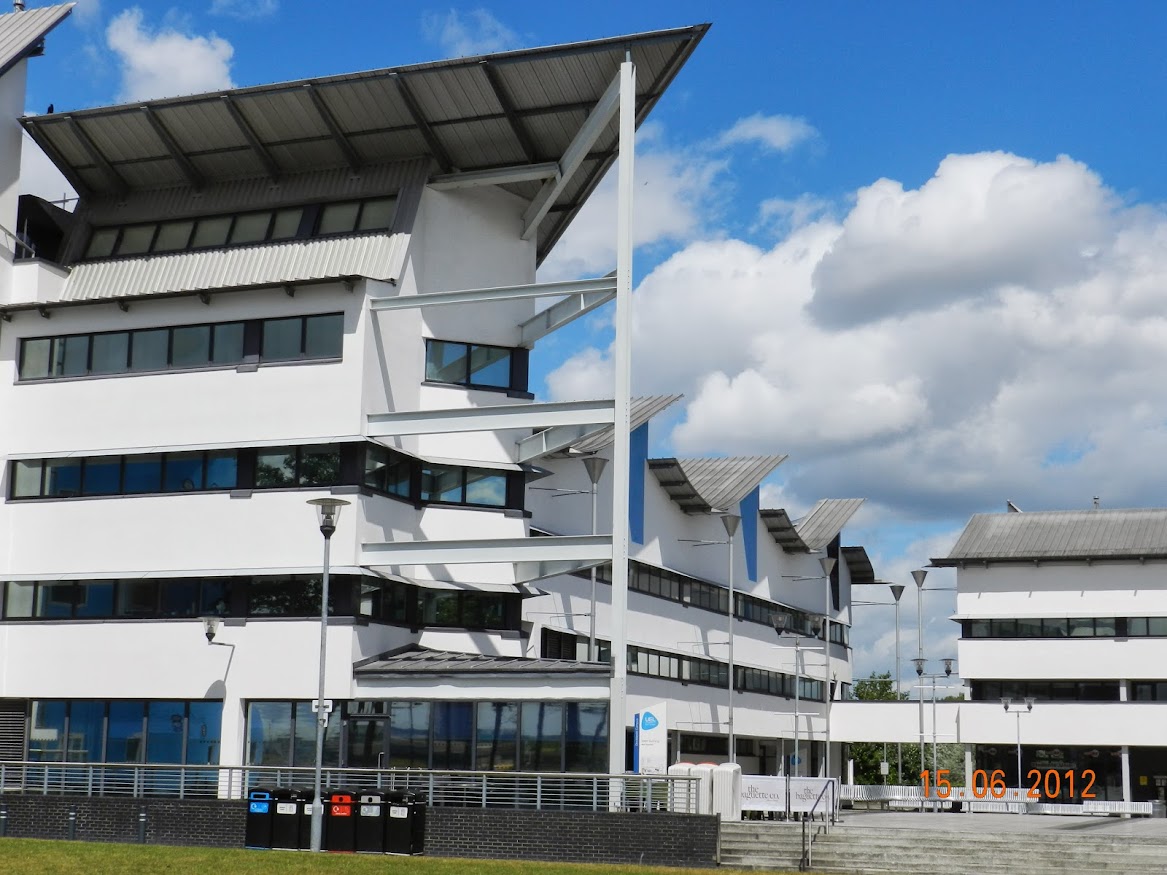 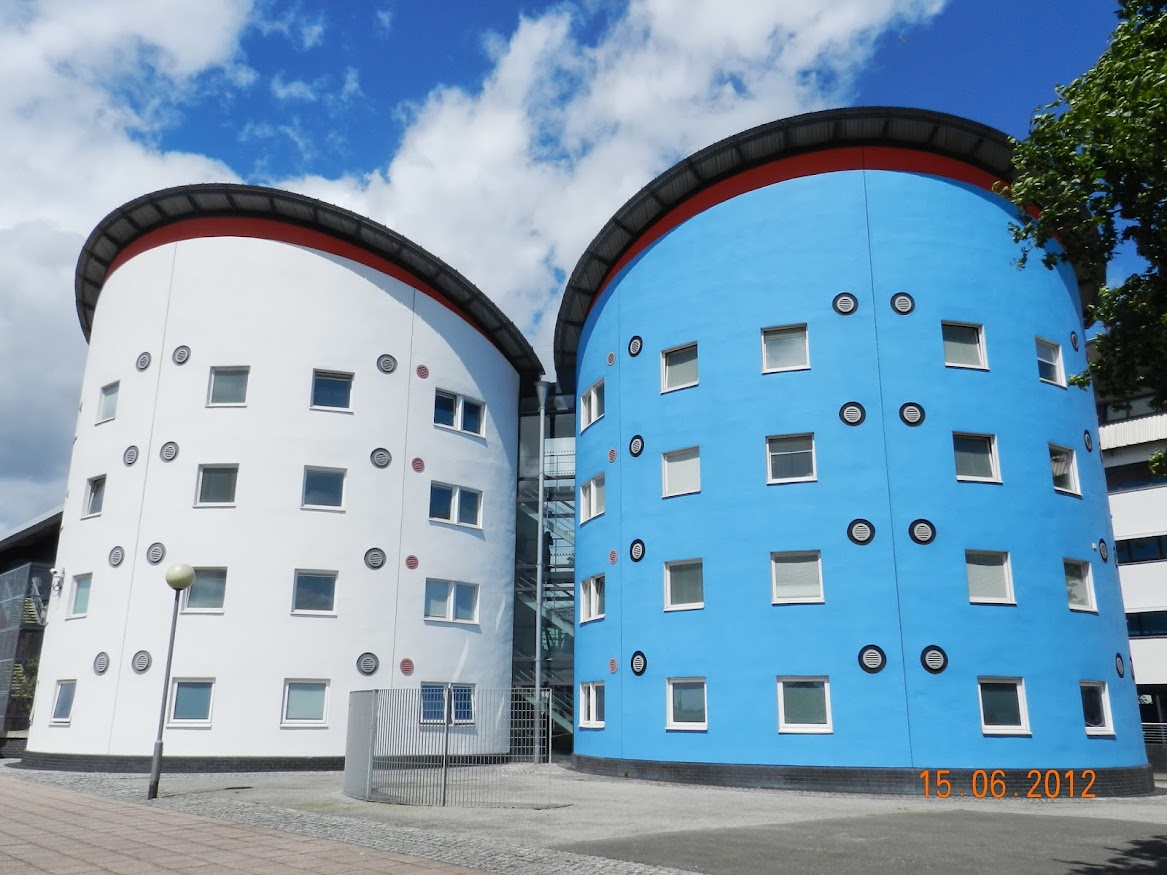 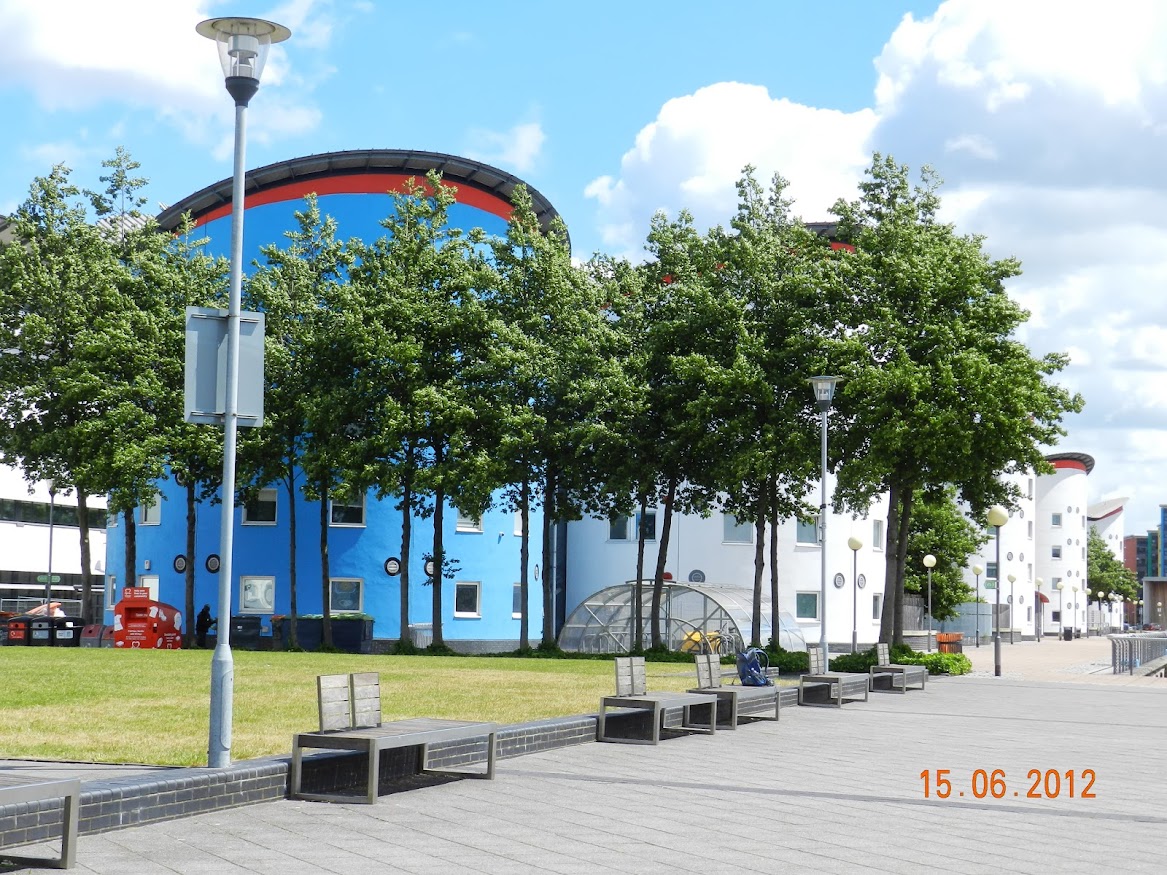 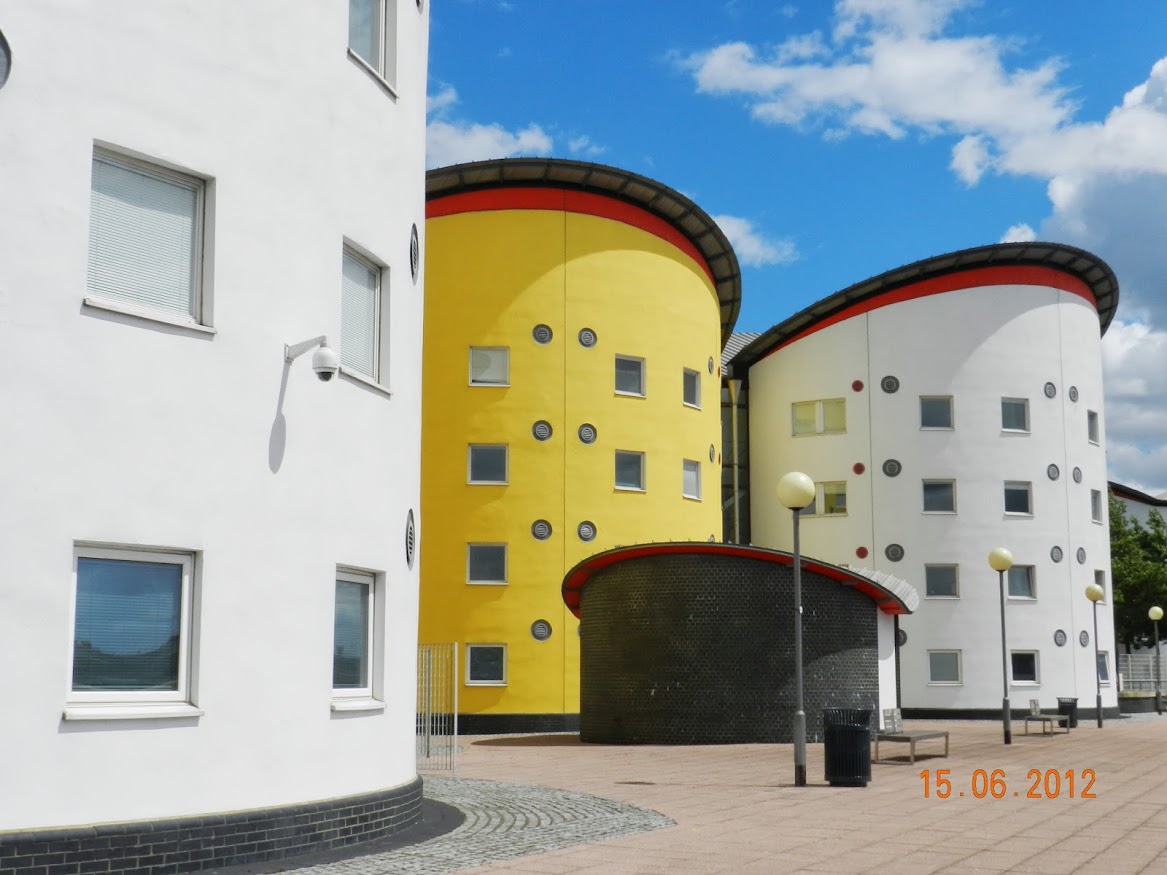 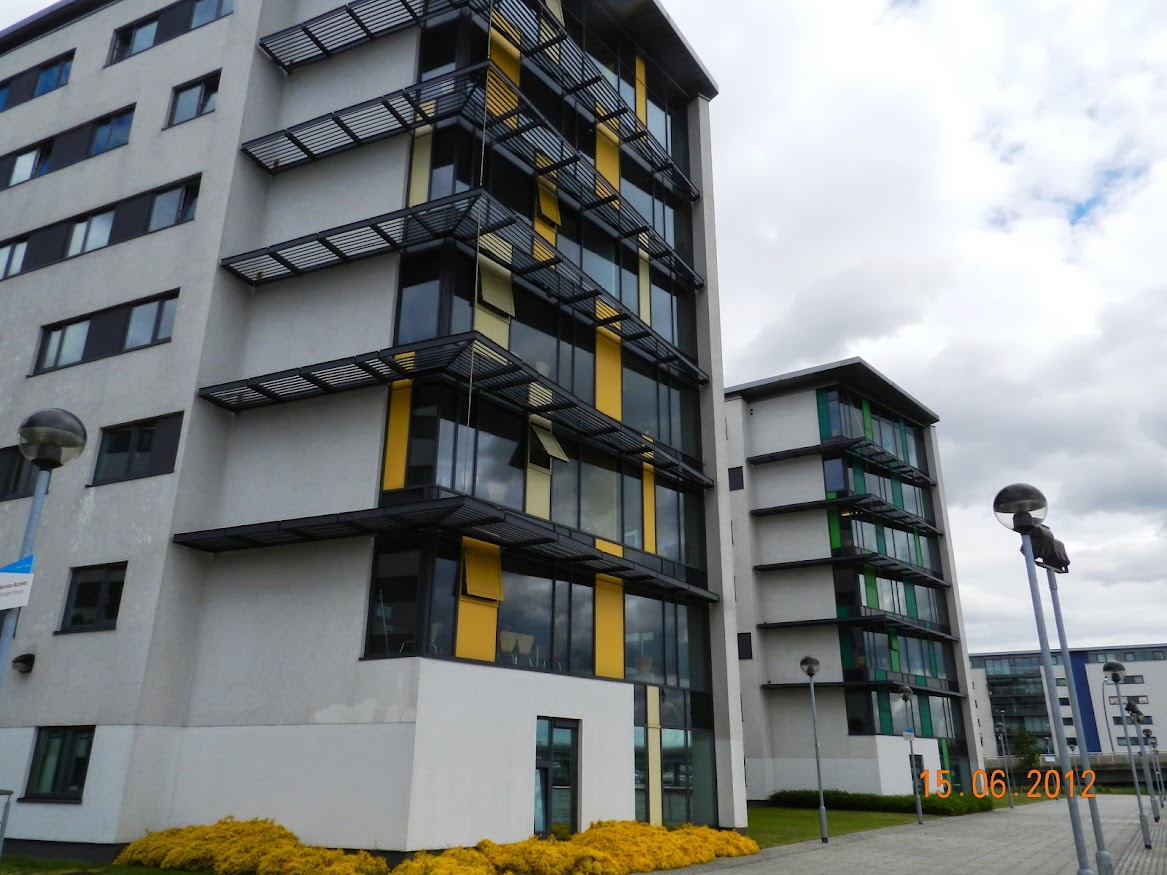 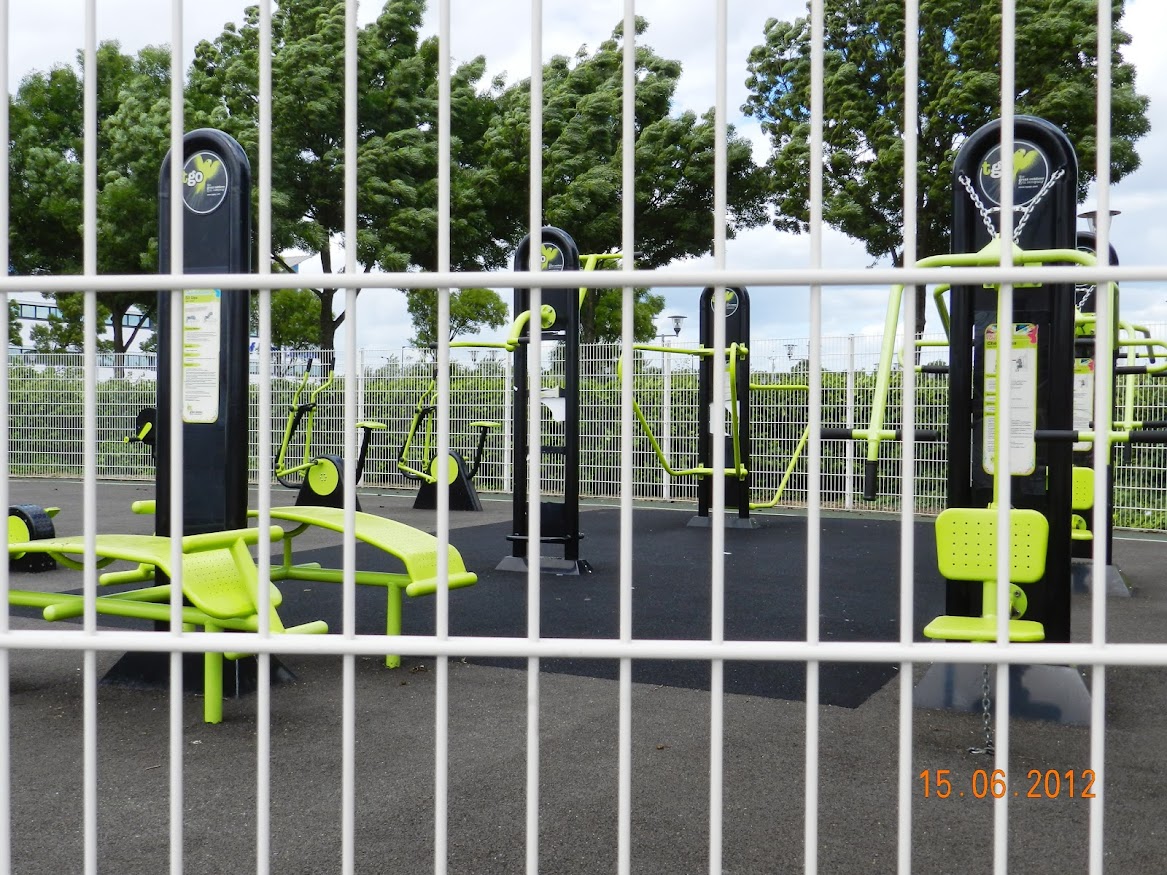 At the waterfront there are great views along the dockside – of London City Airport opposite, situated between two huge bodies of water, and of the Sir Steve Redgrave Bridge to the left: 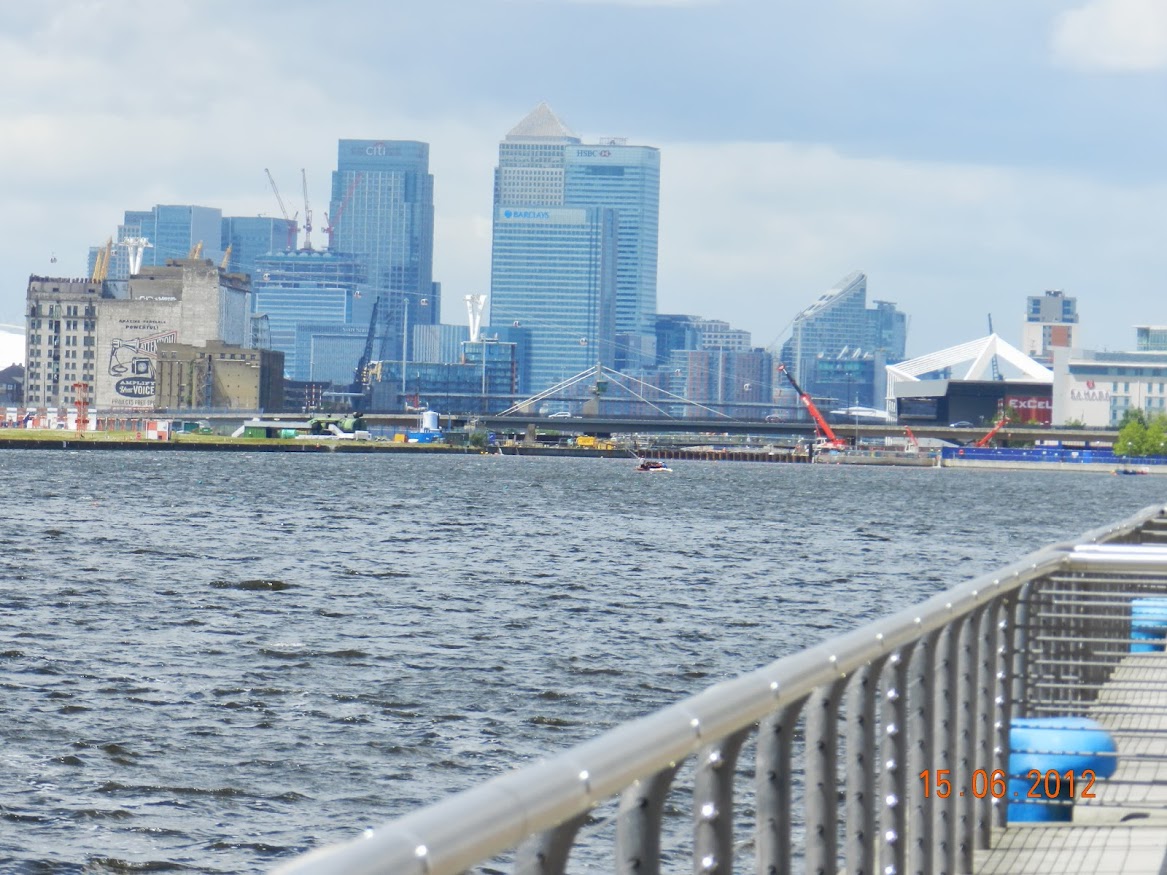 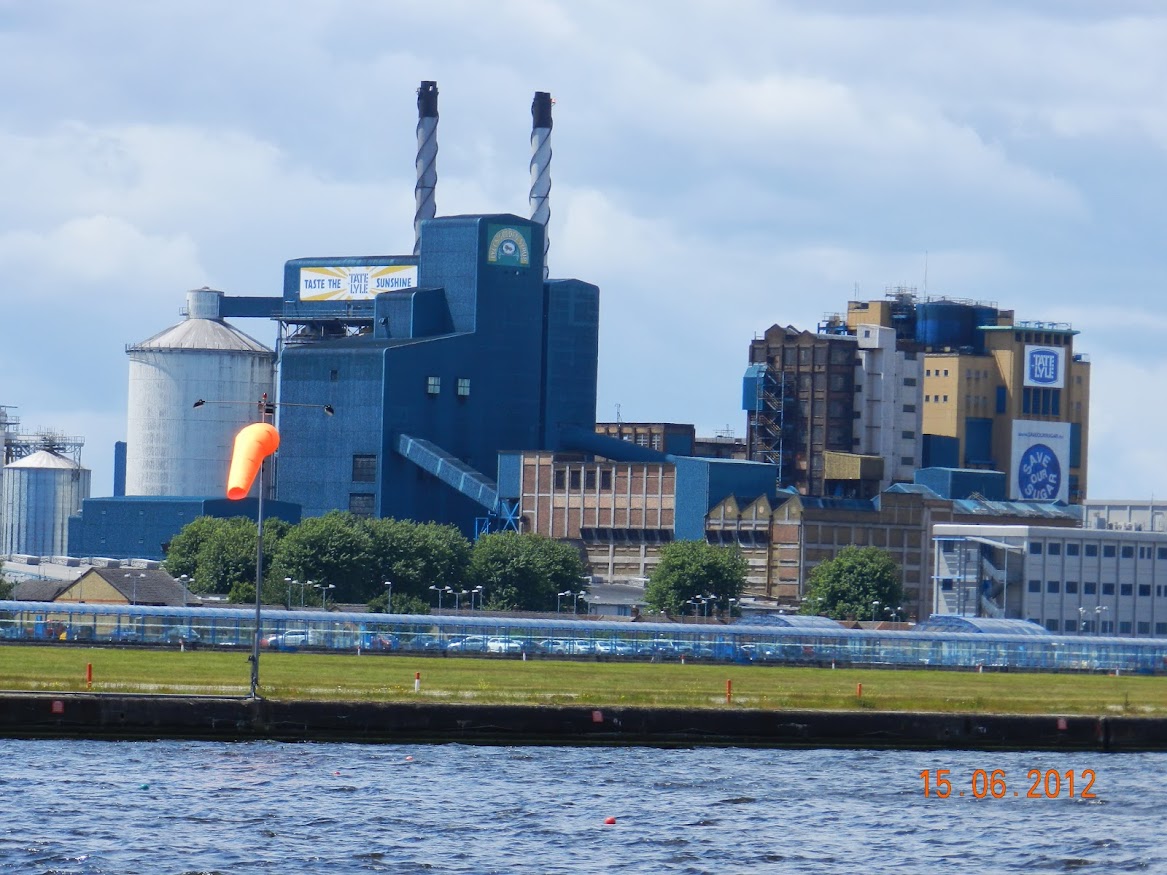 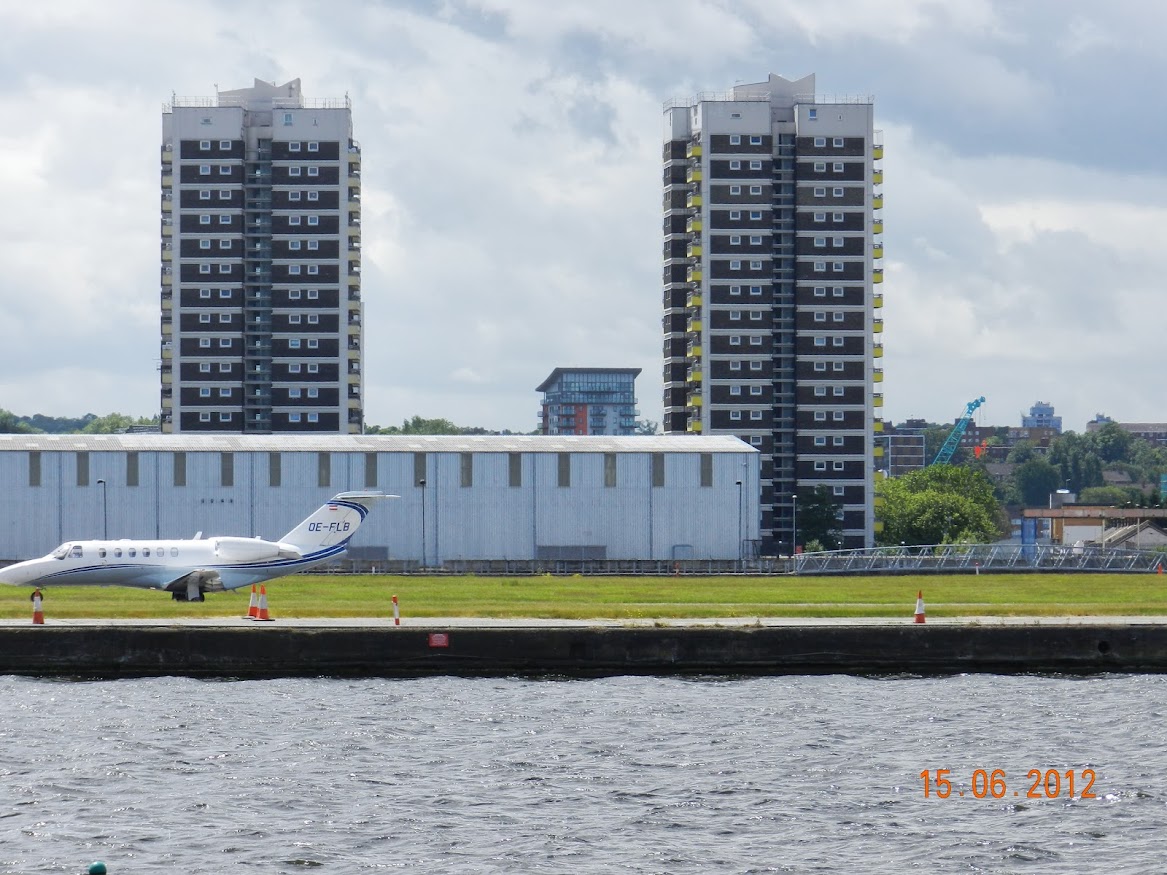 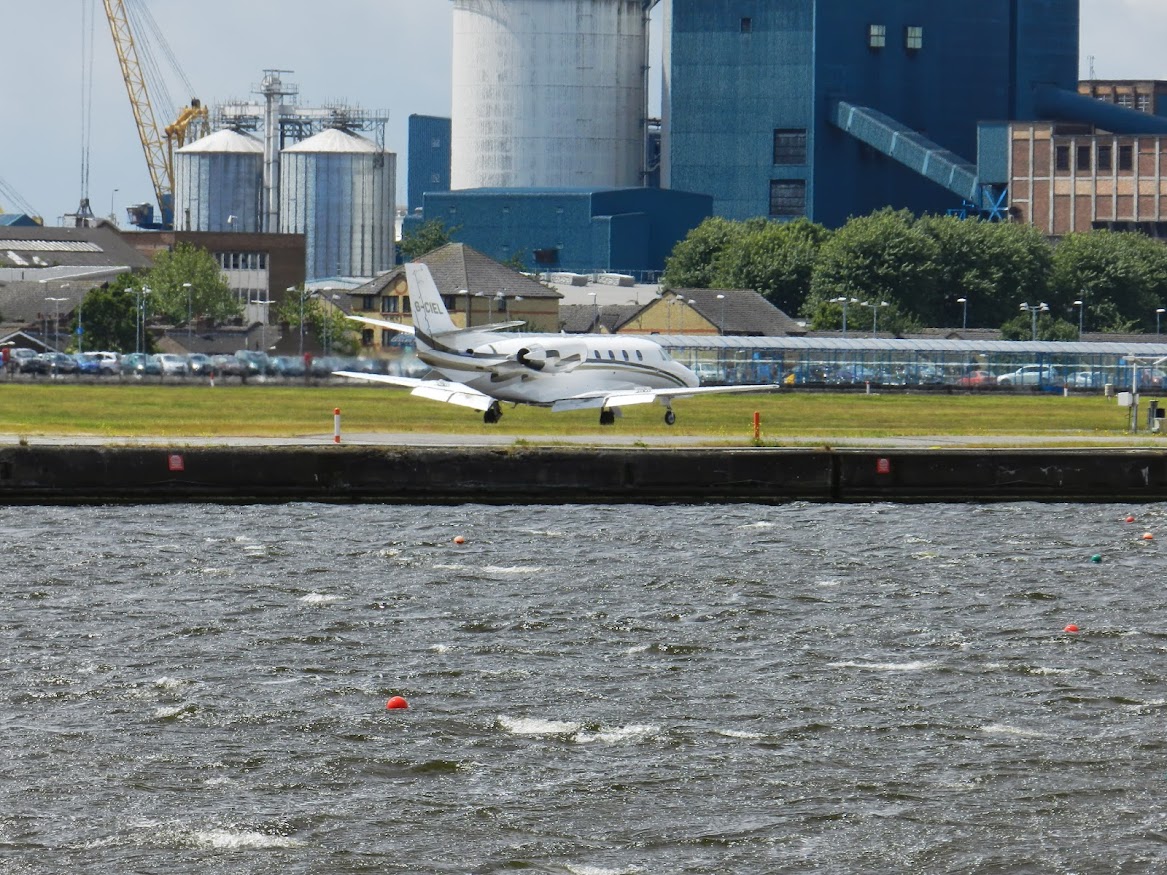 Walk east down the waterfront towards the Redgrave Bridge. Just before the A117 Woolwich Manor Way, turn left on a pathway bordering the UEL campus. Pass under the DLR fly-over, and turn right to cross the road at Gallions Roundabout: 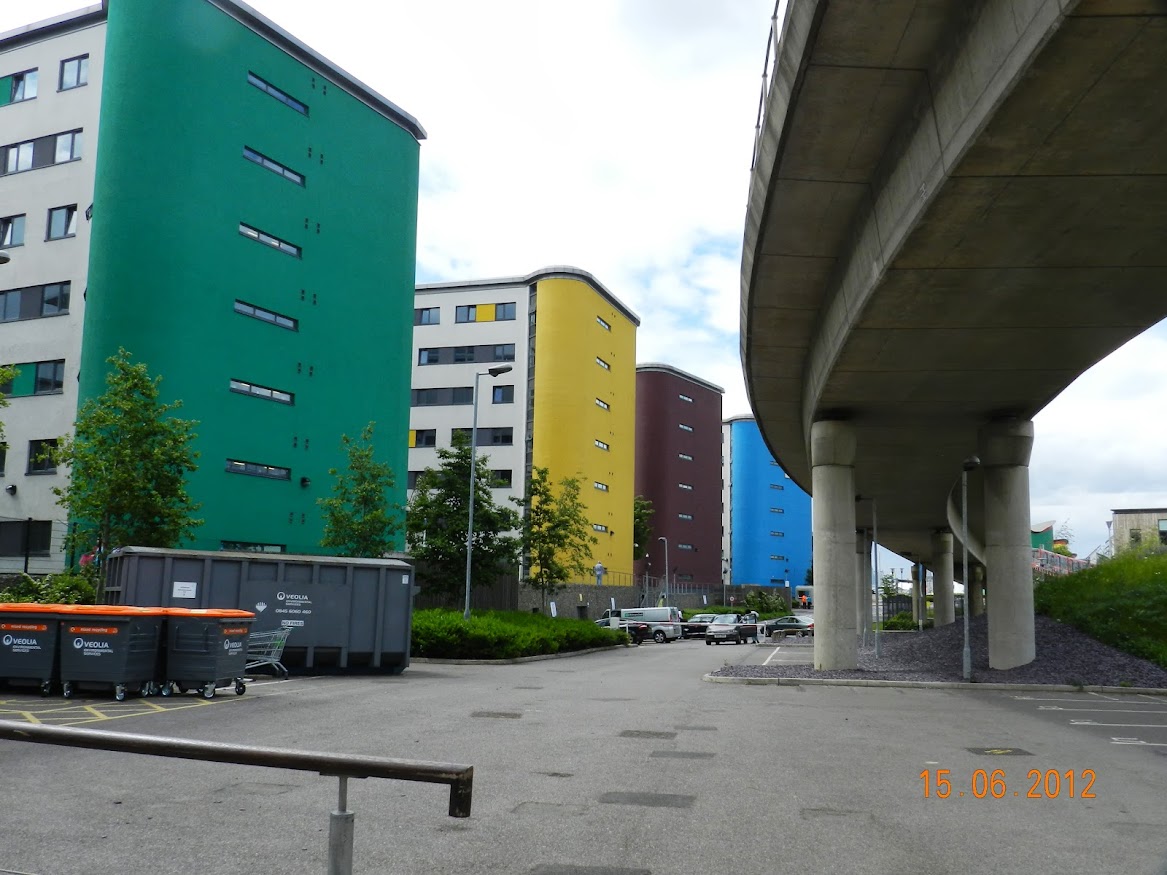 Gallions Reach is named after the Galyons family who were prominent in the area in the 14th century. The word ‘reach’ here refers to an open stretch of water along a river, but originally used to denote the distance that could be sailed by a vessel on one tack.

Over to the right, on the other side of the river Thames, you can see the high point of Shooter’s Hill which is on the Capital Ring Section 1.

There are now two routes – either go along the Thames and over lock gates with a steep drop, or go over the Redgrave Bridge, which avoids steps and is also a short cut to the Woolwich Ferry.

Along the Thames and over lock gates: Follow the roundabout anti-clockwise and turn right into Atlantis Avenue, opposite Gallions Reach DLR. As you walk down Atlantis Avenue a tall radio mast comes into view which becomes your guide and goal. Watch out because what was Armada Way has been renamed Atlantis Avenue. Stay on the south side of the road.
Go straight ahead on Atlantis Avenue to the end of the road, then straight ahead at the traffic light crossroads with Armada Way on the left and Gallions Road on the right. Carry straight on towards the radio mast. Just before reaching the mast is another new road called Magellan Boulevard, where the Capital Ring continues ahead to reach the Thames at paved area with benches.
Turn right at the Thames onto the enclosed pathway. From here the Capital Ring is fully enclosed and fenced all the way to the lock gates, so it is easier to navigate. Cross the large lock gates, and come out onto a small roadway.
Follow the roadway southwards for about 100 metres. Where the road turns sharp right, the Capital Ring turns sharp left, again in a protective fenced section, past cleared development sites and a karting track. You will then come across a second, much larger set of lock gates (King George V).
These gigantic gates at King George V Lock admitted the 36,644-ton Cunard liner RMS Mauretania in 1939. Measuring 790 feet long by 88 feet wide there was just a whisker to spare on all sides.
Turn right behind a brick building at the far side of the lock; go up steps and down the other side. Immediately after the steps do a U-turn beside the residential estate and walk towards the Thames. There is a new pedestrian ramp which leads into the new (renamed) Gallions Point Estate. (Note this section onwards may only open during daylight hours. If it’s closed, follow the Capital Ring ‘interim route’ sign towards the main road and turn left onto Albert Road to pick up the route again.) Turn left in front of the first residential block to reach the river front once again. Turn right alongside the river, and another few metres further on is a riverside plaza with benches. 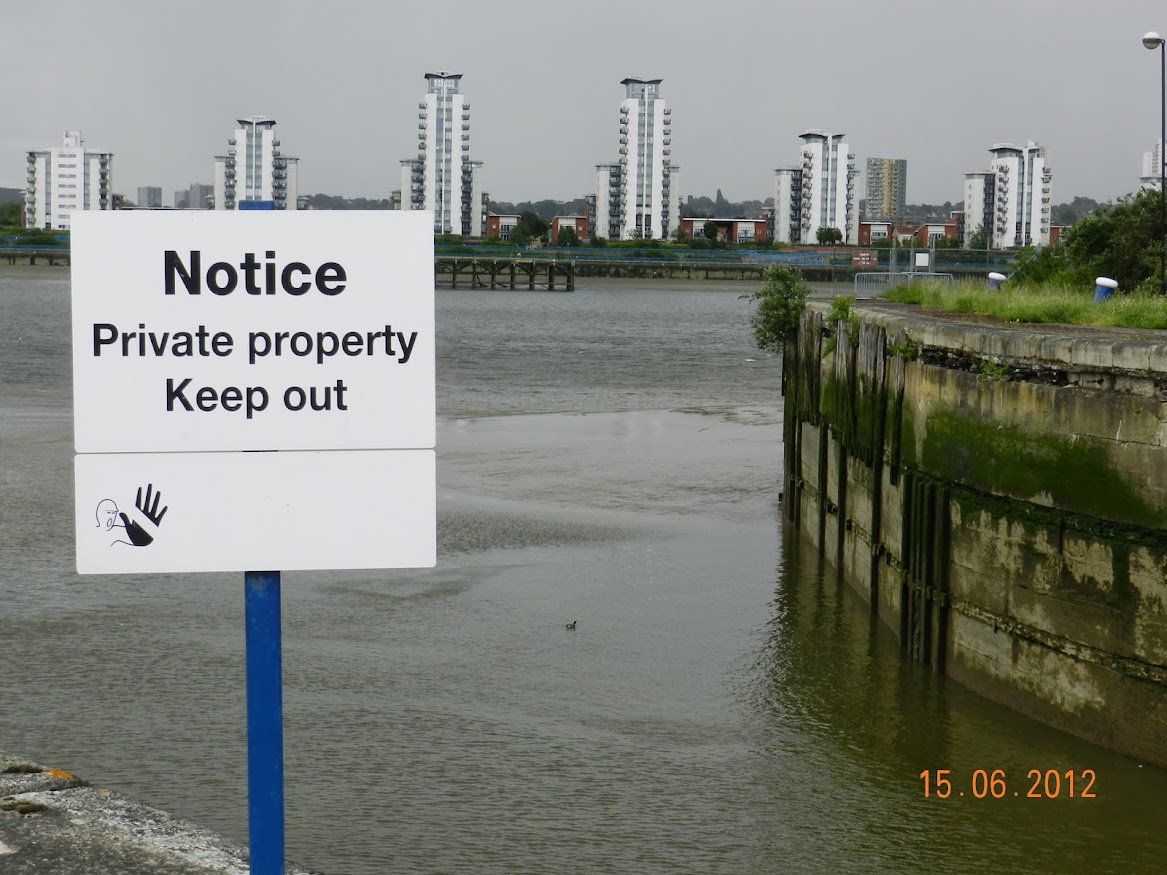 Alternative route over Sir Steve Redgrave Bridge (step free): At Gallions Reach DLR there are signs pointing south towards the bridge. Keep ahead on the gently rising bridge, over Royal Albert Dock and King George V Dock, both closed to commercial traffic in 1981. 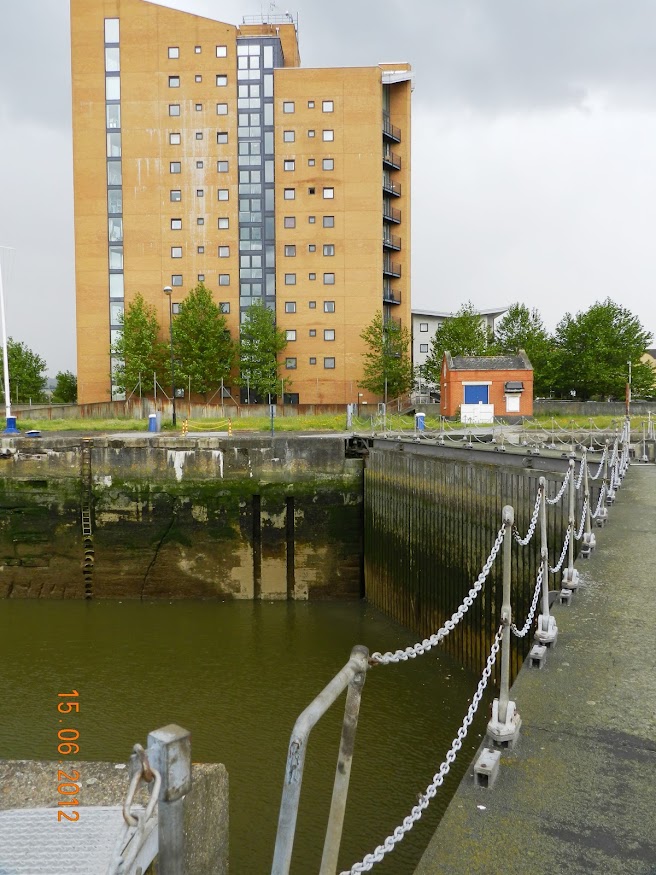 After crossing the King George V / Sir Steve Redgrave Bridge stay on Woolwich Manor Way. Cross Gallions Entrance Road, with its barrier and security office (Capital Ring walkers may use the toilet beside the office).
At the Redgrave Bridge Lock, carry on, taking the next left down Fishguard Way, carry straight ahead on the plaza into Hartelpool Court, and turn right to continue along the riverside. 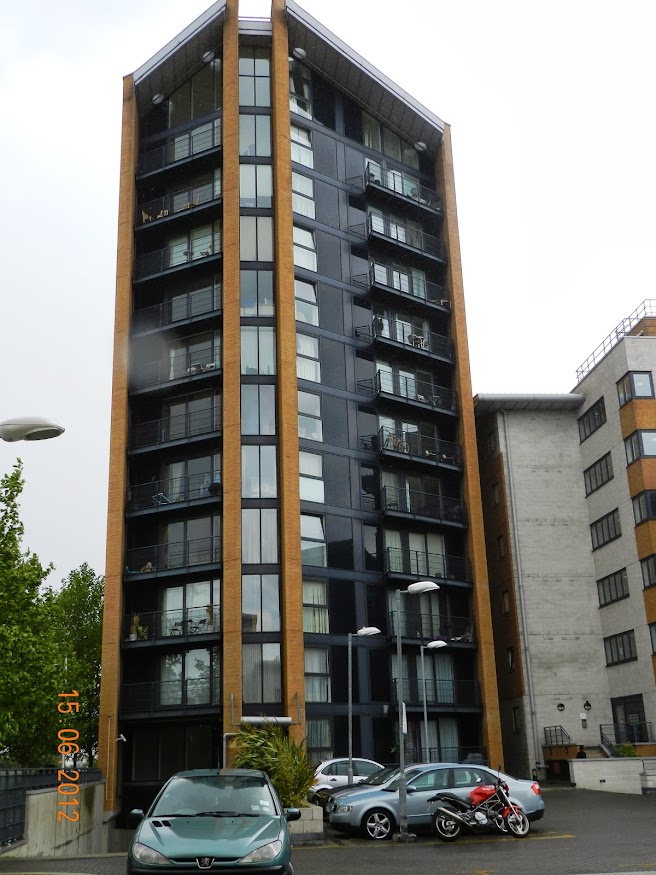 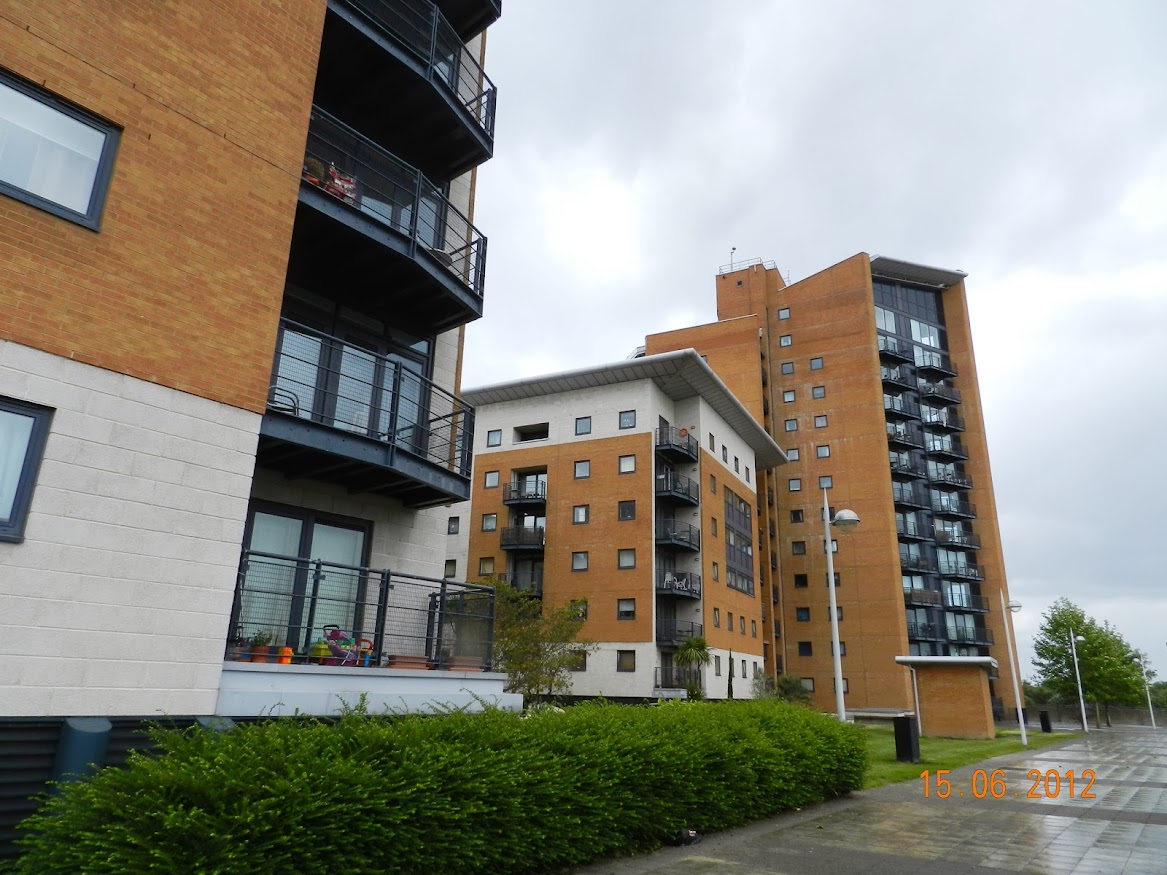 To continue: Passing several slipways, which have been used by the Woolwich Ferry over the centuries, the route arrives at Royal Victoria Park. Walk through the park parallel with the river, exiting onto Albert Road. Alternatively turn right without going into the park and follow Albert Road and Pier Road round to King George V DLR station. 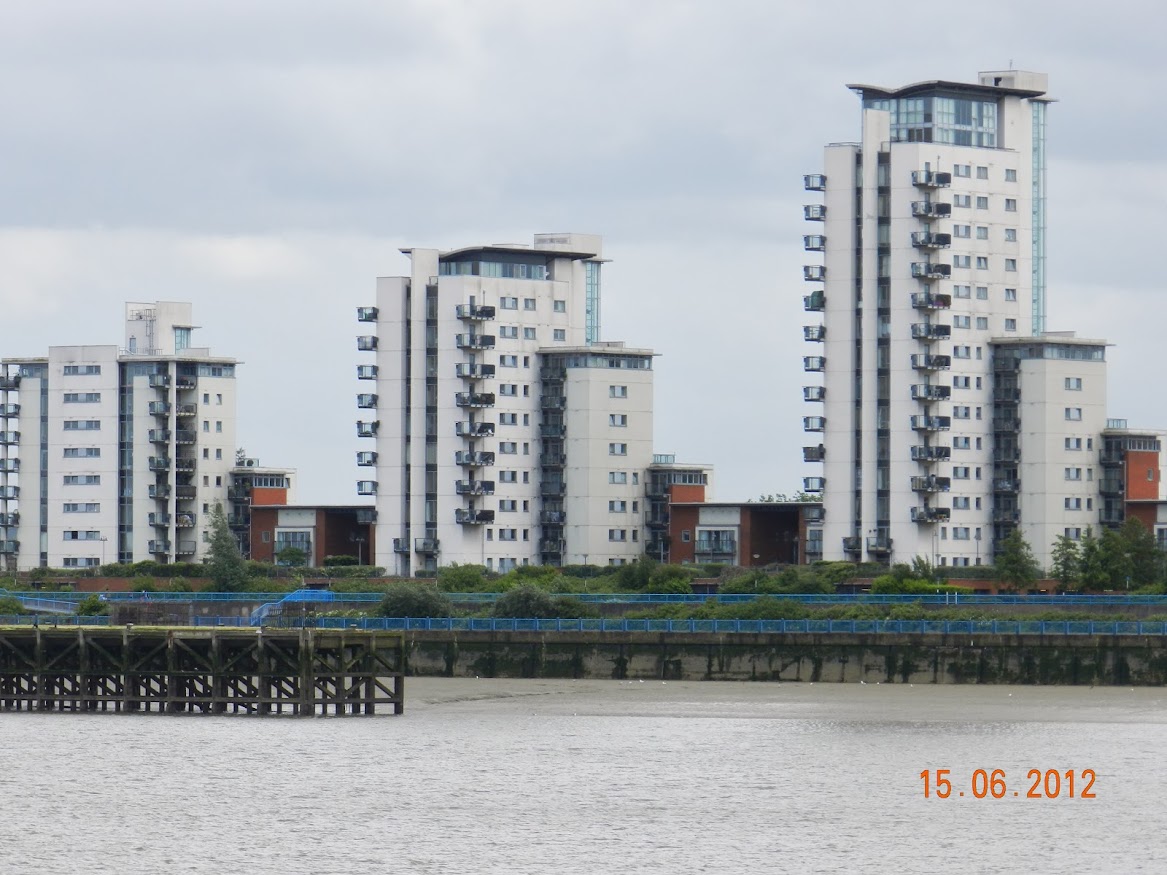 The route arrives at the Woolwich Foot Tunnel, which opened in 1912 and marks the end of Section 15. To complete the whole Capital Ring, go down the 126 steps, then walk a quarter of a mile under the river and up 101 steps to the start of Section 1. Or take a lift down to the tunnel or the free ferry across the river. 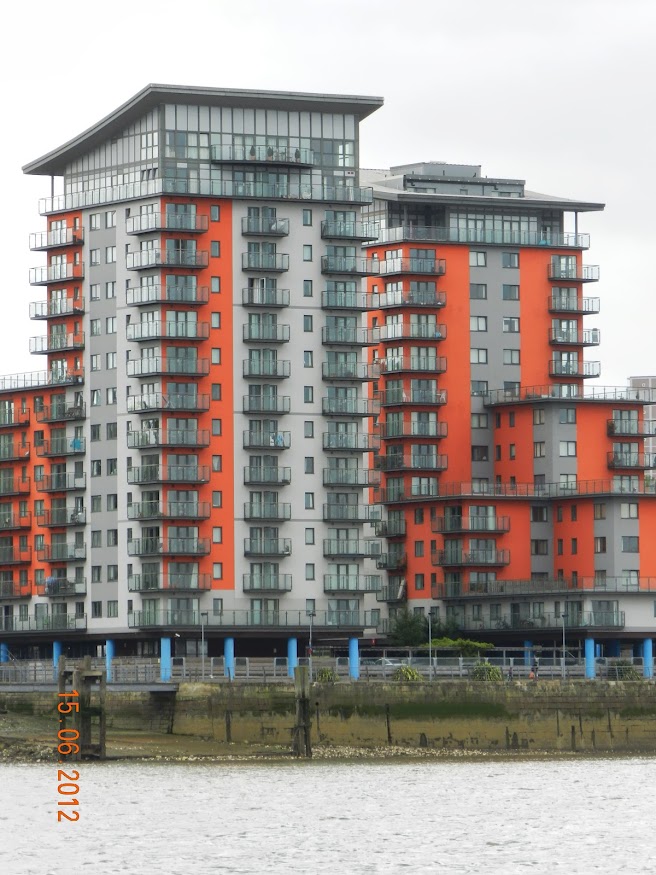 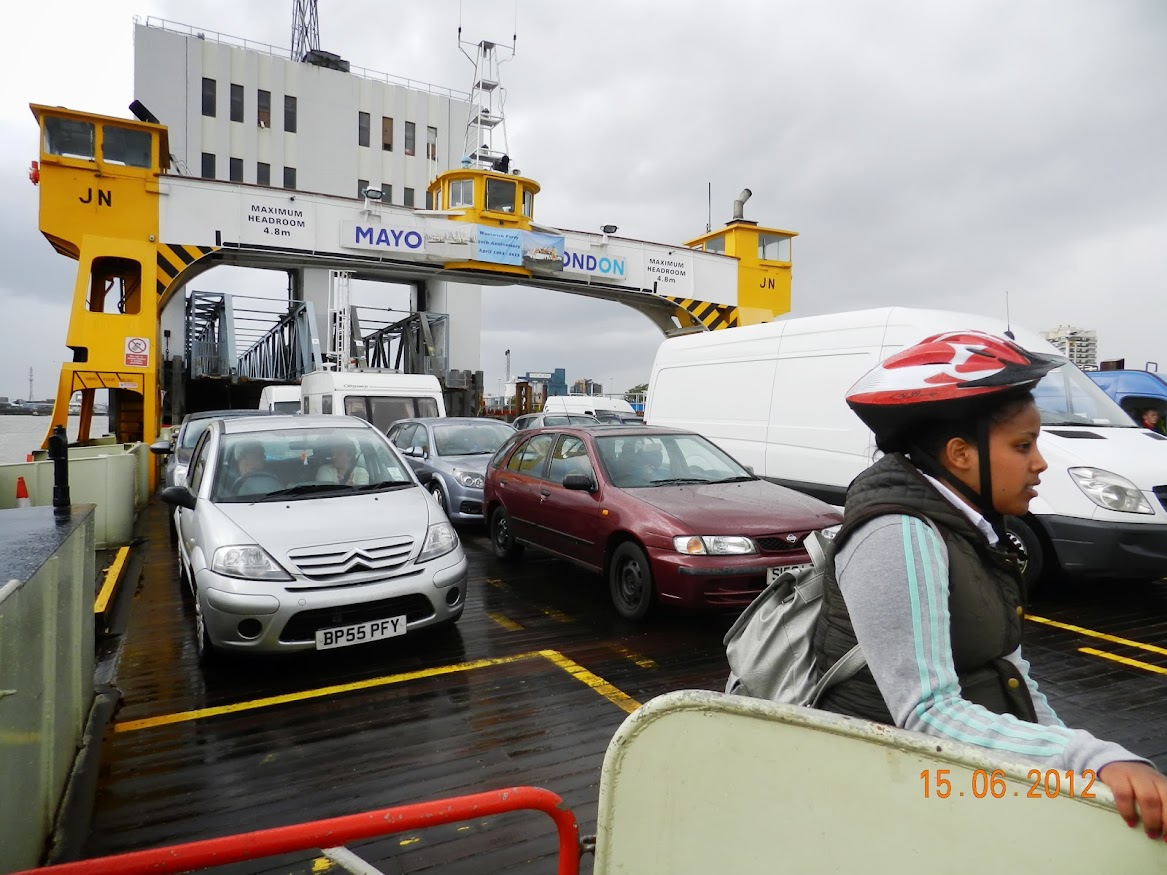 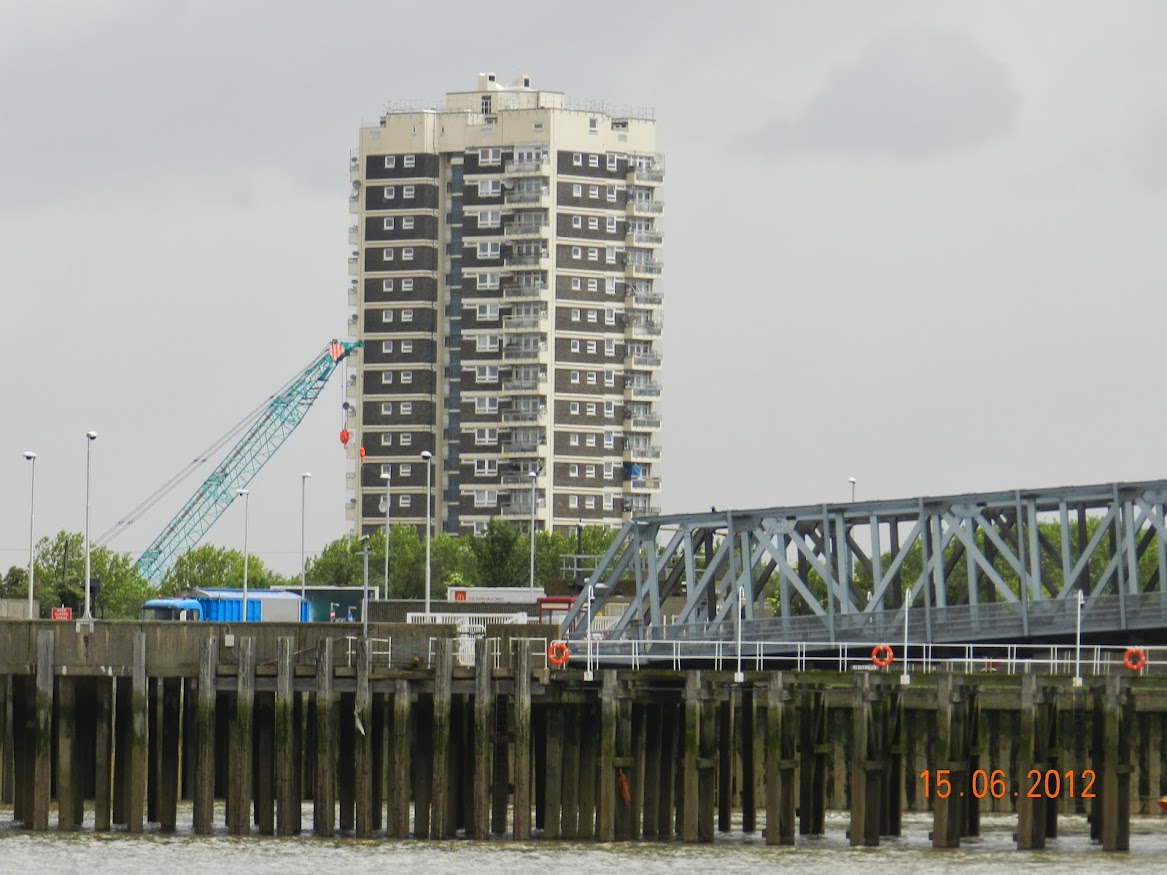 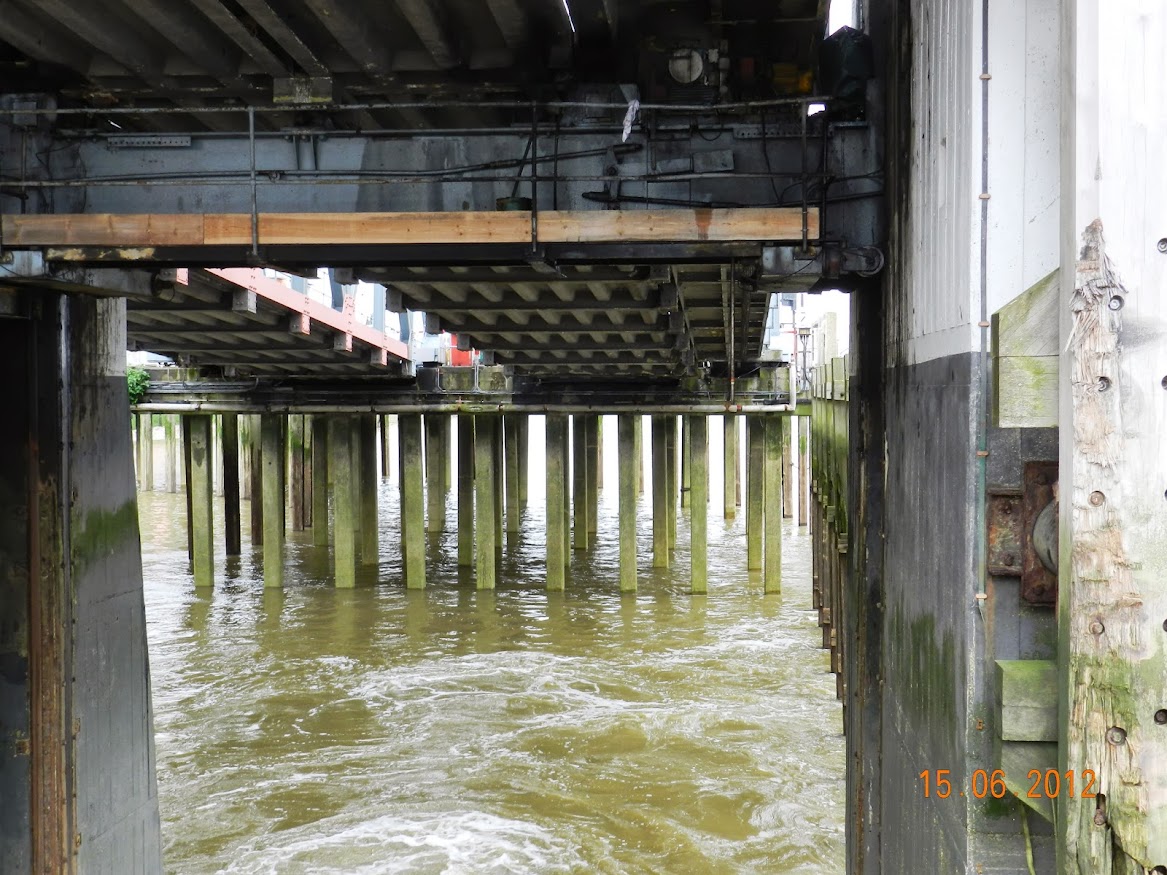 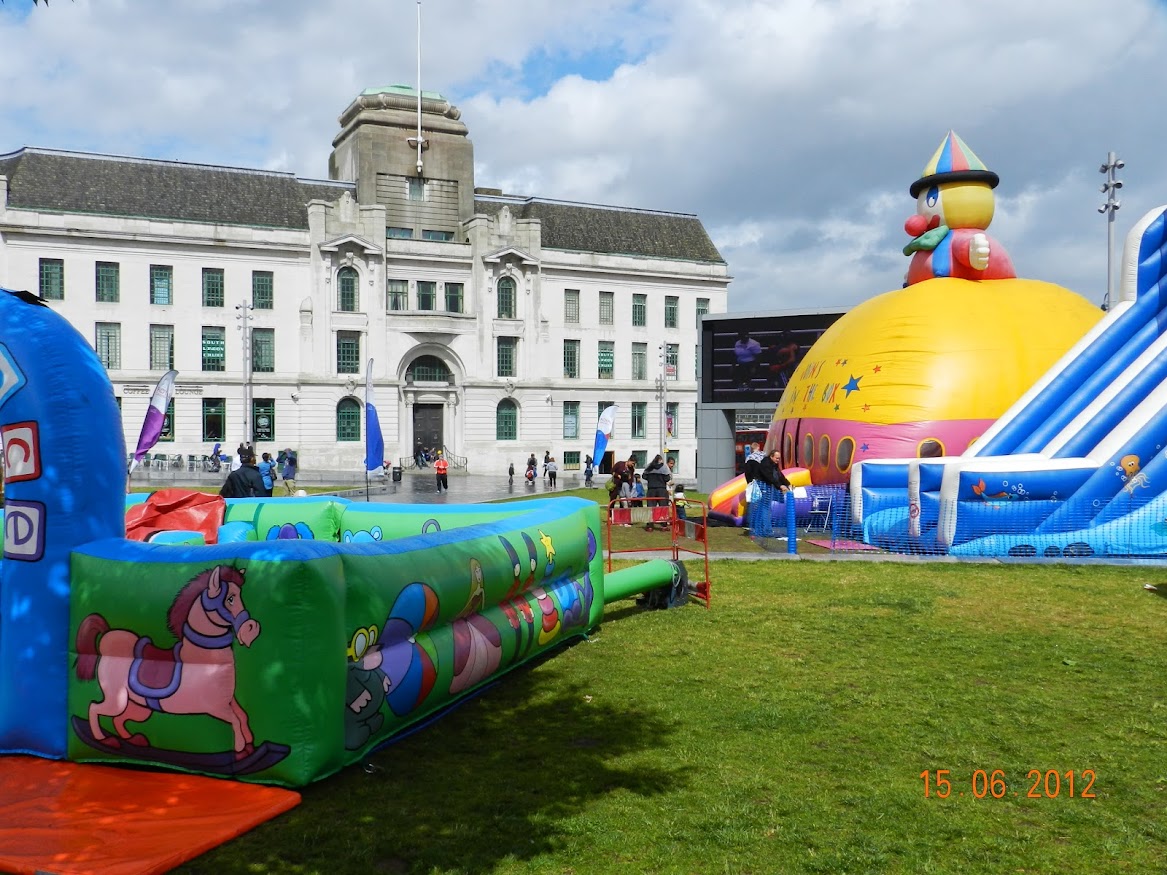